Voice conversion (VC) is a task to transform a person's voice to different style while conserving linguistic contents. Previous state-of-the-art on VC is based on sequence-to-sequence (seq2seq) model, which could mislead linguistic information. There was an attempt to overcome it by using textual supervision, it requires explicit alignment which loses the benefit of using seq2seq model. In this paper, a voice converter using multitask learning with text-to-speech (TTS) is presented. The embedding space of seq2seq-based TTS has abundant information on the text. The role of the decoder of TTS is to convert embedding space to speech, which is same to VC. In the proposed model, the whole network is trained to minimize loss of VC and TTS. VC is expected to capture more linguistic information and to preserve training stability by multitask learning. Experiments of VC were performed on a male Korean emotional text-speech dataset, and it is shown that multitask learning is helpful to keep linguistic contents in VC. 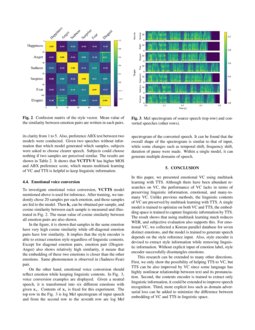 [4]. Recently, successes of sequence-to-sequence (seq2seq) model with attention [5] is also applied to VC [6]. Problems such as mispronunciation, training instability have been observed while training seq2seq VC model [7]. In [7], textual supervision is added to each time step of decoder output to improve the quality of VC. However, this approach has limitations since it requires explicit alignment by human or dynamic time wrapping (DTW).

Furthermore, we extend this work to emotional voice conversion. Given a style reference speech, style encoder extracts emotion information only and removes linguistic contents. Since style encoder is designed to extract emotion regardless of linguistic contents, it can handle multiple input style domain. Also, extracted emotion is injected to the decoder, then it can generate various emotions. Thus the proposed model can handle many-to-many emotional voice conversion.

Contributions of our proposed model are as follows:

The remaining paper is organized as follows: In Section 2, related work of our study will be introduced. In Section 3, details of proposed methods will be explained. Experimental setup and its results will be shown in Section 4, and the paper will be concluded in Section 5.

Traditionally, frame-based models have been used to solve VC. Given source and target speeches, their alignment is found by DTW. Then conversion between acoustic features of aligned frames are modeled. Recently, seq2seq models have been proposed in VC [6, 7]. In these models, the model jointly learns alignment and frame conversion by attention mechanism without explicit temporal alignment. However, the performance of VC is not sufficient since converted voice might lose linguistic information. For example, the same words repeatedly generated, some words dropped, or wrongly pronounced. To prevent these phonomena, textual supervision is added to VC, but it requires explicit alignment [7]. Unlike previous work, we used TTS for guiding linguistic information to VC. This approach does not need any explicit alignment.

Many-to-many VC refers as to the number of source domain and target domain is multiple. In [14]

, Cycle-GAN converted an out-of-dataset speaker to a target speaker, and vice versa. The i-vector-based VC system is proposed to generate the linguistic features of speakers that are not in the training set

[15]. Compared with other many-to-many VC methods [14, 15], our proposed model can transfer the emotional knowledge of speaker and enables conversion among different emotions.

TTS is one of the most active research area in speech domain. Various kinds of Seq2seq models have been proposed [8, 9, 10], and expressive synthesis is also studied [16, 17]. Among them, the most relevant work is [17]. Style vector extracted from style encoder which takes a one-hot vector of emotion as an input is injected to the network to generate emotional speech. In our work, emotion labels are not utilized during training, and any emotion labels are not explicitly taken as our network’s inputs.

The proposed model can perform VC and TTS in a single model. The network plays as VC when its input is (xc, xs), or TTS when the input pair is (yt,xs) where xc, yt, and xs are log Mel spectrogram of speech carrying linguistic contents, one-hot represented text, and log Mel spectrogram of style reference speech, respectively. Both xc and yt are mapped to the same space hl, then it is decoded into Mel spectrogram m. For each decoding step, style vector hs extracted from xs is concatenated to attention RNN and decoder RNN. Linear spectrogram l is obtained by the post processor. Detailed network architecture is depicted in Fig. 1 and below equations.

where ht, hc, and hs are the embedding of text encoder, contents encoder, and style encoder, respectively. h(t)att and h(t)dec

For the TTS part including text encoder, decoder, attention and post processor, overall architecture is based on Tacotron [8], and some modifications that context vector c(t)

is utilized for every iteration in attention RNN, and residual connection is added to Convolution Bank + Highway + bi-GRU (CBHG) connection as described in

Text encoder is composed of character embedding layer, prenet, and CBHG where prenet is composed of two FC-ReLU-Dropout layers. A stack of LSTM is used for contents encoder, and there was no reduction of temporal resolution since temporal reduction may lose local temporal information. It means that the length of

In this section, description on our dataset and implementation details will be delivered. Experiments are designed to verify enhanced speech quality by multitask learning. Also, the analysis on style encoder and the performance of many-to-many emotional VC will be displayed.

We have constructed a male Korean Emotional Text-to-speech (mKETTS) dataset. One 30-year-old male pronounced 3,000 sentences in seven different emotions (neutral, happiness, sadness, anger, fear, surprise, and disgust), so the whole number of utterances is 21,000. The text of all sentences is same across the emotions. All recordings have conducted in a silent studio without noise, and recorded in 44.1 kHz sampling rate. The whole duration after trimming silence is 29.2 hours.

For preprocessing, the silence of the first and end of each waveform is trimmed using voice activity detection (VAD) algorithm111https://github.com/wiseman/py-webrtcvad and resampled to 16 kHz. Then log Mel spectrogram is extracted with window size 50ms, shift 12.5 ms, nfft 2048, 80 Mel bins and Hanning window. The magnitude was normalized to [0, 1]. Since text encoder uses character-based representation, Korean character decomposed into onset, nucleus, and coda, then converted into one-hot representation.

For detailed parameter settings are followed. We used 256 character embedding, 32 dimension for hs

. The initial learning rate was 1e-3 for Adam optimizer. Gradient clipping was used with 1, and

m was generated with reduction factor 5. The batch size was 32, and Bahdanau attention [5]

was used. For contents encoder, we used two layers of bidirectional LSTM and for style encoder, and contents encoder is composed of two layers of unidirectional LSTM. The output of the last time step is only used for contents encoder. The parameters of contents encoder and style encoder is not shared. In the training stage, teacher forcing is used to prevent accumulating loss of predicted output. When creating mini-batches, each sample is zero-padded to the longest length of the samples. Then losses on the zero-padded regions are also backpropagated for inference stability. For every iteration, the task of the network is randomly decided to either VC or TTS. For each sample, the source and target emotion are differently selected.

Word error rate (WER) was computed to measure how our proposed model improves the linguistic consistency of the converted speech. Practically, morphemes were used instead of words since morphemes are considered as recognition units of Korean speech [18, 19, 20]. Google Cloud Speech-to-Text API transcribed the converted speech, and transcripts were divided into a sequence of morphemes by the Komoran morphological analyzer in KoNLPy [21]. Average WER between two sequences of morphemes from true transcripts and automatically recognized transcripts was then calculated and shown in Table 1. The result shows that VCTTS-V outperforms VC, and WER of VCTTS-T is worse than TTS.

After training, eight native Korean speakers participated in subjective evaluation. 20 sentences were generated by VC and VCTTS-V models. Emotion of xc was set to neutral and target emotion was set to happiness while sentence of xs is fixed. It is blindly tested that subjects never knew which model generated which speeches. Subjects were asked to rate its clarity from 1 to 5. Also, preference ABX test between two models were conducted. Given two speeches without information that which model generated which samples, subjects were asked to choose clearer speech. Subjects could choose nothing if two samples are perceived similar. The results are shown in Table 2. It shows that VCTTV-V has higher MOS and ABX preference score, which means multitask learning of VC and TTS is helpful to keep linguistic information.

To investigate emotional voice conversion, VCTTS model mentioned above is used for inference. After training, we randomly chose 20 samples per each emotion, and those samples are fed to the model. Then hs

can be obtained per sample, and cosine similarity between each sample is measured and illustrated in Fig.

2. The mean value of cosine similarity between all emotion pairs are also shown.

In the figure, it is shown that samples in the same emotion have very high cosine similarity while off-diagonal emotion pairs have low similarity. It implies that the style encoder is able to extract emotion style regardless of linguistic contents. Except for diagonal emotion pairs, emotion pair (Disgust-Anger) also shows relatively high similarity, it means that the embedding of these two emotions is closer than the other emotions. Same phonomenon is observed in (Sadness-Fear) pair.

On the other hand, emotional voice conversion should reflect emotion while keeping linguistic contents. In Fig. 3, voice conversion examples are displayed. Given a neutral speech, it is transformed into six different emotions with given xs. Contents of xs is fixed for this experiment. The top row in the Fig. 3 is log Mel spectrogram of input speech and from the second row to the seventh row are log Mel spectrogram of the converted speech. It can be found that the overall shape of the spectrogram is similar to that of input, while some changes such as temporal shift, frequency shift, duration of pause were made. Within a single model, it can generate multiple domains of speech.

In this paper, we presented emotional VC using multitask learning with TTS. Although there have been abundant researches on VC, the performance of VC lacks in terms of preserving linguistic information, emotional, and many-to-many VC. Unlike previous methods, the linguistic contents of VC are preserved by multitask learning with TTS. A single model is trained to optimize on both VC and TTS, the embedding space is trained to capture linguistic information by TTS. The result shows that using multitask learning much reduces WER, and subjective evaluation also supports this. For emotional VC, we collected a Korean parallel database for seven distinct emotions, and the model is trained to generate speech depends on the style reference input. Also, style encoder is devised to extract style information while removing linguistic information. Without explicit input of emotion label, style encoder successfully disentangles emotions.

This research can be extended to many other directions. First, we only show the possibility of helping TTS to VC, but TTS can be also improved by VC since some language has highly nonlinear relationship between text and its pronunciation. Second, the contents encoder is trained to extract only linguistic information, it could be extended to improve speech recognition. Third, more explicit loss such as domain adversarial loss can be added to minimize the difference between embedding of VC and TTS in linguistic space.