This demo paper presents Emora STDM (State Transition Dialogue Manager), a dialogue system development framework that provides novel workflows for rapid prototyping of chat-based dialogue managers as well as collaborative development of complex interactions. Our framework caters to a wide range of expertise levels by supporting interoperability between two popular approaches, state machine and information state, to dialogue management. Our Natural Language Expression package allows seamless integration of pattern matching, custom NLP modules, and database querying, that makes the workflows much more efficient. As a user study, we adopt this framework to an interdisciplinary undergraduate course where students with both technical and non-technical backgrounds are able to develop creative dialogue managers in a short period of time. 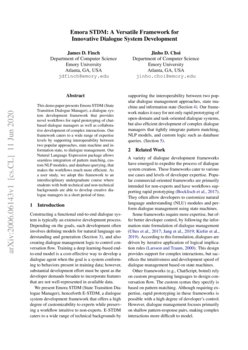 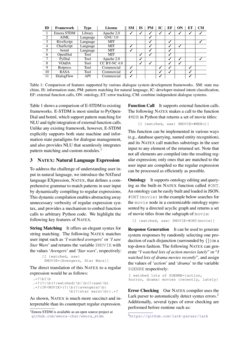 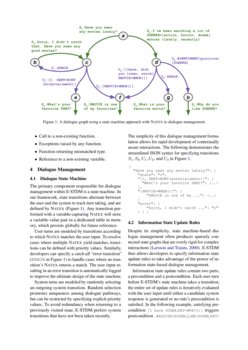 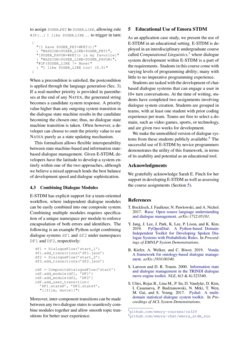 Back to the Future for Dialogue Research: A Position Paper

This short position paper is intended to provide a critique of current a...
Philip R Cohen, et al. ∙

This paper describes an implementation of a bot assistant in Minecraft, ...
Jonathan Gray, et al. ∙

Athena 2.0 is an Alexa Prize SocialBot that has been a finalist in the l...
Juraj Juraska, et al. ∙

Constructing a functional end-to-end dialogue system is typically an extensive development process. Depending on the goals, such development often involves defining models for natural language understanding and generation (Section 3

), and also creating dialogue management logic to control conversation flow. Training a deep learning-based end-to-end model is a cost-effective way to develop a dialogue agent when the goal is a system conforming to behaviors present in training data; however, substantial development effort must be spent as the developer demands broaden to incorporate features that are not well-represented in available data.

We present Emora STDM (State Transition Dialogue Manager), henceforth E-STDM, a dialogue system development framework that offers a high degree of customizability to experts while preserving a workflow intuitive to non-experts. E-STDM caters to a wide range of technical backgrounds by supporting the interoperability between two popular dialogue management approaches, state machine and information state (Section 4). Our framework makes it easy for not only rapid prototyping of open-domain and task-oriented dialogue systems, but also efficient development of complex dialogue managers that tightly integrate pattern matching, NLP models, and custom logic such as database queries. (Section 5).

Some frameworks require more expertise, but offer better developer control, by following the information state formulation of dialogue management Ultes et al. (2017); Jang et al. (2019); Kiefer et al. (2019). According to this formulation, dialogues are driven by iterative application of logical implication rules Larsson and Traum (2000). This design provides support for complex interactions, but sacrifices the intuitiveness and development speed of dialogue management based on state machines.

Other frameworks (e.g., ChatScript, botml) rely on custom programming languages to design conversation flow. The custom syntax they specify is based on pattern matching. Although requiring expertise, rapid prototyping in these frameworks is possible with a high degree of developer’s control. However, dialogue management focuses primarily on shallow pattern-response pairs, making complex interactions more difficult to model.

Table 1 shows a comparison of E-STDM to existing frameworks. E-STDM is most similar to PyOpenDial and botml, which support pattern matching for NLU and tight integration of external function calls. Unlike any existing framework, however, E-STDM explicitly supports both state machine and information state paradigms for dialogue management, and also provides NLU that seamlessly integrates pattern matching and custom modules.111

Emora STDM is available as an open source project at

To address the challenge of understanding user input in natural language, we introduce the NATural language EXpression, Natex, that defines a comprehensive grammar to match patterns in user input by dynamically compiling to regular expressions. This dynamic compilation enables abstracting away unnecessary verbosity of regular expression syntax, and provides a mechanism to embed function calls to arbitrary Python code. We highlight the following key features of Natex.

It offers an elegant syntax for string matching. The following Natex matches user input such as ‘I watched avengers’ or ‘I saw Star Wars’ and returns the variable $MOVIE with the values ‘Avengers’ and ‘Star wars’, respectively:

The direct translation of this Natex to a regular expression would be as follows:

As shown, Natex is much more succinct and interpretable than its counterpart regular expression.

It supports external function calls. The following Natex makes a call to the function #MDB in Python that returns a set of movie titles:

This function can be implemented in various ways (e.g., database querying, named entity recognition), and its

It supports ontology editing and querying as the built-in Natex function called #ONT. An ontology can be easily built and loaded in JSON. #ONT(movie) in the example below searches for the movie node in a customizable ontology represented by a directed acyclic graph and returns a set of movie titles from the subgraph of movie:

It can be used to generate system responses by randomly selecting one production of each disjunction (surrounded by {}) in a top-down fashion. The following Natex can generate “I watched lots of action movies lately” or “I watched lots of drama movies recently”, and assign the values of ‘action’ and ‘drama’ to the variable $GENRE respectively:

I watched lots of GENRE=action,horror,dramamoviesrecently,lately

Our Natex compiler uses the Lark parser to automatically detect syntax errors.222https://github.com/lark-parser/lark Additionally, several types of error checking are performed before runtime such as:

The primary component responsible for dialogue management within E-STDM is a state machine. In our framework, state transitions alternate between the user and the system to track turn taking, and are defined by Natex (Figure 1). Any transition performed with a variable-capturing Natex will storea variable-value pair in a dedicated table in memory, which persists globally for future reference.

User turns are modeled by transitions according to which Natex matches the user input. To resolvecases where multiple Natex yield matches, transitions can be defined with priority values. Similarly, developers can specify a catch-all “error transition” (ERROR in Figure 1) to handle cases where no transition’s Natex returns a match. The user input resulting in an error transition is automatically logged to improve the ultimate design of the state machine.

System turns are modeled by randomly selectingan outgoing system transition. Random selection promotes uniqueness among dialogue pathways, but can be restricted by specifying explicit priority values. To avoid redundancy when returning to a previously visited state, E-STDM prefers system transitions that have not been taken recently.

The simplicity of this dialogue management formulation allows for rapid development of contextually aware interactions. The following demonstrates the streamlined JSON syntax for specifying transitions S1,S3,U1,U2, and U3 in Figure 1.

Information state update rules contain two parts, a precondition and a postcondition. Each user turn before E-STDM’s state machine takes a transition, the entire set of update rules is iteratively evaluated with the user input until either a candidate system response is generated or no rule’s precondition is satisfied. In the following example, satisfying precondition [I have $USER_PET=#PET()] triggers postcondition #ASSIGN($USER_LIKE=$USER_PET) to assign $USER_PET to $USER_LIKE, allowing rule #IF(..) I like $USER_LIKE .. to trigger in turn:

When a precondition is satisfied, the postcondition is applied through the language generation (Sec. 3). If a real-number priority is provided in parentheses at the end of any Natex, the generated string becomes a candidate system response. A priority value higher than any outgoing system transition in the dialogue state machine results in the candidate becoming the chosen one; thus, no dialogue state machine transition is taken. Often however, a developer can choose to omit the priority value to use Natex purely as a state updating mechanism.

This formalism allows flexible interoperability between state machine-based and information state-based dialogue management. Given E-STDM, developers have the latitude to develop a system entirely within one of the two approaches, although we believe a mixed approach lends the best balance of development speed and dialogue sophistication.

E-STDM has explicit support for a team-oriented workflow, where independent dialogue modules can be easily combined into one composite system.Combining multiple modules requires specification of a unique namespace per module to enforce encapsulation of both errors and identifiers. The following is an example Python script combining dialogue systems df1 and df2 under namespaces DF1 and DF2, respectively:

Moreover, inter-component transitions can be made between any two dialogue states to seamlessly combine modules together and allow smooth topic transitions for better user experience.

5 Educational Use of Emora STDM

As an application case study, we present the use ofE-STDM in an educational setting. E-STDM is deployed in an interdisciplinary undergraduate course called Computational Linguistics,333github.com/emory-courses/cs329 where dialogue system development within E-STDM is a part of the requirements. Students in this course come with varying levels of programming ability; many with little to no imperative programming experience.

Students are tasked with the development of chat-based dialogue systems that can engage a user in 10+ turn conversations. At the time of writing, students have completed two assignments involving dialogue system creation. Students are grouped in teams, with at least one student with prior coding experience per team. Teams are free to select a domain, such as video games, sports, or technology, and are given two weeks for development.

We make the unmodified version of dialogue systems from these students publicly available.444github.com/emora-chat/emora_stdm_zoo The successful use of E-STDM by novice programmers demonstrates the utility of this framework, in terms of its usability and potential as an educational tool.

We gratefully acknowledge Sarah E. Finch for her support in developing E-STDM as well as assessing the course assignments (Section 5).