Reversible data hiding (RDH) is one special type of information hiding, by which the host sequence as well as the embedded data can be both restored from the marked sequence without loss. Beside media annotation and integrity authentication, recently some scholars begin to apply RDH in many other fields innovatively. In this paper, we summarize these emerging applications, including steganography, adversarial example, visual transformation, image processing, and give out the general frameworks to make these operations reversible. As far as we are concerned, this is the first paper to summarize the extended applications of RDH. 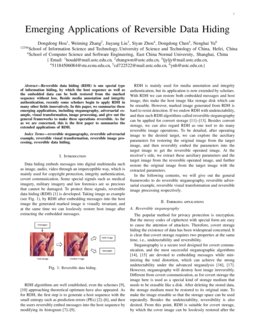 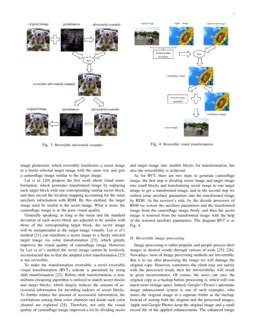 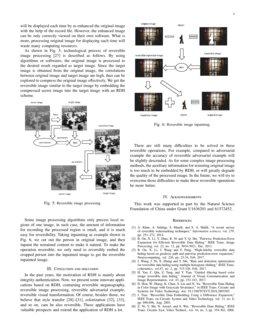 Data hiding embeds messages into digital multimedia such as image, audio, video through an imperceptible way, which is mainly used for copyright protection, integrity authentication, covert communication. Some special signals such as medical imagery, military imagery and law forensics are so precious that cannot be damaged. To protect these signals, reversible data hiding (RDH) [1] is developed. Taking image as example (see Fig. 1), by RDH after embedding messages into the host image the generated marked image is visually invariant, and at the same time we can losslessly restore host image after extracting the embedded messages.

RDH algorithms are well established, even the schemes [9, 10] approaching theoretical optimum have also appeared. As for RDH, the first step is to generate a host sequence with the small entropy such as prediction errors (PEs) [2, 3, 4, 5, 6], and then the users reversibly embed messages into the host sequence by modifying its histogram [8, 7, 9].

RDH is mainly used for media annotation and integrity authentication, but its application is now extended by scholars. With RDH we can restore both embedded messages and host image, this make the host image like storage disk which can be erasable. However, marked image generated from RDH is hard to resist detection. If we endow RDH with undetectability, and then such RDH algorithms called reversible steganography can be applied for convert storage [11, 12, 13]. Besides convert storage, we can also regard RDH as one tool to do many reversible image operations. To be detailed, after operating image to the desired target, we can explore the auxiliary parameters for restoring the original image from the target image, and then reversibly embed the parameters into the target image to get the reversible operated image. At the receiver’s side, we extract these auxiliary parameters and the target image from the reversible operated image, and further restore the original image from the target image with the extracted parameters.

In the following contents, we will give out the general frameworks to do reversible steganography, reversible adversarial example, reversible visual transformation and reversible image processing respectively.

The popular method for privacy protection is encryption. But the messy codes of ciphertext with special form are easy to cause the attention of attackers. Therefore, covert storage hiding the existence of data has been widespread concerned. It is clear that covert storage requires two properties at the same time, i.e., undetectability and reversibility.

Steganography is a secure tool designed for covert communication, and the most successful steganographic algorithms [14, 15] are devoted to embedding messages while minimizing the total distortion, which can achieve the strong undetectability under the advanced steganalysis [16, 17]. However, steganography will destroy host image irreversibly. Different from covert communication, as for covert storage the image here is used as a special kind of storage medium that needs to be erasable like a disk. After deleting the stored data, the storage medium must be restored to its original state. To make the image erasable so that the storage space can be used repeatedly. Besides the undetectability, reversibility is also desired. From this point, RDH is suitable for covert storage, by which the cover image can be losslessly restored after the message being extracted. But traditional RDH algorithms are not secure under steganalysis.

The high undetectability of steganography is mainly achieved by modifying the complex regions of images. However, most of RDH algorithms give the priority of modifications to pixels in smooth regions due to that pixels in smooth areas can be predicted more accurately. That’s the reason why traditional RDH cannot resist steganalysis. Recently, Hong et al. [11] give out the first RDH algorithm which has much higher undetectability than traditional ones. The undetectability is mainly achieved by embedding messages into PEs with small absolute values, but PEs in complex regions are preferentially modified through a sorting technique. Then Zhang et al. [12] improve Hong et al.’s method by giving the priority to PEs with the larger absolute values for accommodating messages.

To minimize the average distortion between the host sequence X and the generated marked sequence Y, each sub-OTPM PYi|Xi(y|x) is desired for i=1,2,...,K, by which we can optimally modify the K

K sub-OTPMs PYi|Xi(y|x) is presented in [13]. After getting these sub-OTPMs, we perform recursive code construction (RCC) to finish the message embedding. Reversible steganography [11, 12, 13] has the reversibility as traditional RDH and the ability of undetectability as traditional steganography, which will be rather valuable in the applications of covert storage. Based on the above, one framework of reversible steganography minimizing the distortion is given as Fig. 2.

As for one deep neural network (DNN), its parameters are optimized by reducing the loss gradually on the training set. After optimizing these parameters, DNN can be successful applied in image classification, speech recognition, and so on. However, as for the trained network, one input with the carefully selected small perturbation perhaps will get a completely different result. Such input to fool the network is called an adversarial example. One can perturb an image to misclassify network while keeping the image quality to be imperceptible for human eyes. Even worse, an attacker can use the trained classifier to generate adversarial example, and then use it to fool another model.

One simple way for creating adversarial example proposed by Goodfellow et al [18] is adding the perturbation on host image, and the added perturbation is the direction in image space which yields the highest increase of the linearized cost. The hyper-parameter ε is applied to limit the distance between the adversarial image \emphXadv and the host image X. Specifically,

where ytrue is the target fooling class.

Traditional secure data hiding algorithms [14, 15] are effective for embedding a small part of messages into a large cover, such as an image. But for image transmission and storage, the image itself is the secret file to be protected. Therefore, we need large capacity data hiding method to hide image. Reversible visual transformation is usually used for image protection, which reversibly transforms a secret image to a freely-selected target image with the same size and gets a camouflage image similar to the target image.

Lai et al. [20] propose the first work about visual transformation, which generates transformed image by replacing each target block with one corresponding similar secret block, and then record the location mapping accounting for the main auxiliary information with RDH. By this method, the target image must be similar to the secret image. What is more, the camouflage image is in the poor visual quality.

Generally speaking, as long as the mean and the standard deviation of each secret block are adjusted to be similar with those of the corresponding target block, the secret image will be masqueraded as the target image visually. Lee

Image processing is rather popular, and people process their images to desired results through various of tools [25, 26]. Nowadays, most of image processing methods are irreversible, that is to say after processing the image we will damage the original copy. However, sometimes the client may not satisfy with the processed result, then the irreversibility will result in great inconvenience. Of course, the users can save the original copy as a backup before processing it, which will cost much more storage space. Indeed, Google’s Picasa’s automatic image enhancement system is one of such examples, who stores the original image in a separate folder as the backup. Instead of storing both the original and the processed images, Apple and Google Photos keep the original image and a small record file of the applied enhancements. The enhanced image will be displayed each time by re-enhanced the original image with the help of the record file. However, the enhanced image can be only correctly viewed on their own software. What is more, processing original image for displaying each time will waste many computing resources.

Some image processing algorithms only precess local regions of one image, in such case, the amount of information for recording the processed region is small, and it is much easy for reversibility. Taking inpainting as example shown in Fig. 6, we cut out the person in original image, and then inpaint the remained content to make it natural. To make the operation reversible, we only need to reversibly embed the cropped person into the inpainted image to get the reversible inpainted image.

In the past years, the motivation of RDH is mainly about integrity authentication. Now, we present some innovate applications based on RDH, containing reversible steganography, reversible image processing, reversible adversarial example, reversible visual transformation. Of course, besides those, we believe that style transfer [28, 29, 30, 31]

[32, 33], and so on, cam be also reversible. These applications have valuable prospects and extend the application of RDH a lot.

There are still many difficulties to be solved in these reversible operations. For example, compared to adversarial example the accuracy of reversible adversarial example will be slightly descended. As for some complex image processing methods, the auxiliary information for restoring original image is too much to be embedded by RDH, or will greatly degrade the quality of the processed image. In the future, we will try to overcome those difficulties to make these reversible operations be more better.