Hospital readmission is a crucial healthcare quality measure that helps in determining the level of quality of care that a hospital offers to a patient and has proven to be immensely expensive. It is estimated that more than 25 billion are spent yearly due to readmission of diabetic patients in the USA. This paper benchmarks existing models and proposes a new embedding based state-of-the-art deep neural network(DNN). The model can identify whether a hospitalized diabetic patient will be readmitted within 30 days or not with an accuracy of 95.2 of 97.4 are encouraging with patients having changes in medication while admitted having a high chance of getting readmitted. Identifying prospective patients for readmission could help the hospital systems in improving their inpatient care, thereby saving them from unnecessary expenditures. 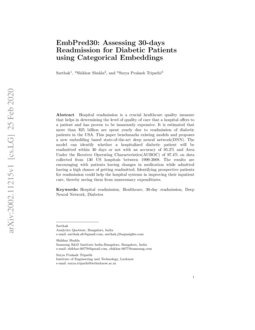 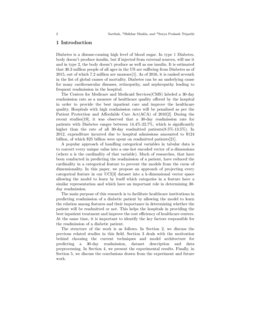 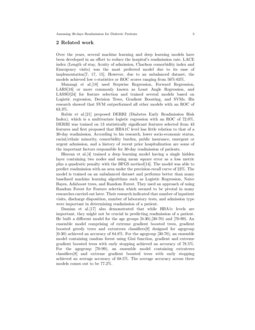 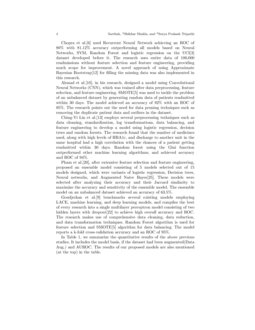 Towards Vision-Based Smart Hospitals: A System for Tracking and Monitoring Hand Hygiene Compliance

One in twenty-five patients admitted to a hospital will suffer from a ho...
Albert Haque, et al. ∙

Trends in risks of severe events and lengths of stay for COVID-19 hospitalisations in England over the pre-vaccination era: results from the Public Health England SARI-Watch su

Diabetes is a disease-causing high level of blood sugar. In type 1 Diabetes, body doesn’t produce insulin, but if injected from external sources, will use it and in type 2, the body doesn’t produce as well as use insulin. It is estimated that 30.3 million people of all ages in the US are suffering from Diabetes as of 2015, out of which 7.2 million are unawareUS_DM. As of 2016, it is ranked seventh in the list of global causes of mortality. Diabetes can be an underlying cause for many cardiovascular diseases, retinopathy, and nephropathy leading to frequent readmission in the hospital.

The Centers for Medicare and Medicaid Services(CMS) labeled a 30-day readmission rate as a measure of healthcare quality offered by the hospital in order to provide the best inpatient care and improve the healthcare quality. Hospitals with high readmission rates will be penalized as per the Patient Protection and Affordable Care Act(ACA) of 2010CMS. During the recent studiesOstling, it was observed that a 30-day readmission rate for patients with Diabetes ranges between 14.4%-22.7%, which is significantly higher than the rate of all 30-day readmitted patients(8.5%-13.5%). In 2012, expenditure incurred due to hospital admissions amounted to $124 billion, of which $25 billion were spent on readmitted patientsRubin2018.

A popular approach of handling categorical variables in tabular data is to convert every unique value into a one-hot encoded vector of n-dimensions (where n is the cardinality of that variable). Much of researches, that have been conducted in predicting the readmission of a patient, have reduced the cardinality in a categorical feature to prevent the models from the curse of dimensionality. In this paper, we propose an approach of projecting every categorical feature in our UCI

UCI dataset into a k-dimensional vector space allowing the model to learn by itself which categories in a feature have a similar representation and which have an important role in determining 30-day readmission.

The main purpose of this research is to facilitate healthcare institutions in predicting readmission of a diabetic patient by allowing the model to learn the relation among features and their importance in determining whether the patient will be readmitted or not. This helps the hospitals in providing the best inpatient treatment and improve the cost efficiency of healthcare centers. At the same time, it is important to identify the key factors responsible for the readmission of a diabetic patient.

The structure of the work is as follows. In Section 2, we discuss the previous related studies in this field. Section 3 deals with the motivation behind choosing the current techniques and model architecture for predicting a 30-day readmission, dataset description and data preprocessing. In Section 4, we present the experimental results. Finally, in Section 5, we discuss the conclusions drawn from the experiment and future work.

Over the years, several machine learning and deep learning models have been developed in an effort to reduce the hospital’s readmission rate. LACE index (Length of stay, Acuity of admission, Charlson comorbidity index and Emergency visits) was the most preferred model due to its ease of implementation

Damerye016921; DamianhbA1c; Low. However, due to an unbalanced dataset, the models achieved low c-statistics or ROC scores ranging from 56%-63%.

for feature selection and trained several models based on Logistic regression, Decision Trees, Gradient Boosting, and SVMs. His research showed that SVM outperformed all other models with an ROC of 63.3%.

Rubin et al.Rubin2018 proposed DERRI (Diabetes Early Readmission Risk Index), which is a multivariate logistic regression with an ROC of 72.0%. DERRI was trained on 13 statistically significant features selected from 43 features and first proposed that HBA1C level has little relation to that of a 30-day readmission. According to his research, lower socio-economic status, racial/ethnic minority, comorbidity burden, public insurance, emergent or urgent admission, and a history of recent prior hospitalization are some of the important factors responsible for 30-day readmission of patients.

Bhuvan et al.Bhuvan2016IdentifyingDP trained a deep learning model having a single hidden layer containing two nodes and using mean square error as a loss metric plus a quadratic penalty with the BFGS methodBFGS

. The model was able to predict readmission with an area under the precision-recall curve of 23%. The model is trained on an unbalanced dataset and performs better than many baselined machine learning algorithms such as Logistic Regression, Naive Bayes, Adaboost trees, and Random Forest. They used an approach of using Random Forest for Feature selection which seemed to be pivotal in many researches carried out later. Their research indicated that number of inpatient visits, discharge disposition, number of laboratory tests, and admission type were important in determining readmission of a patient.

also demonstrated that while HBA1c levels are important, they might not be crucial in predicting readmission of a patient. He built a different model for the age groups [0-30),[30-70) and [70-99). An ensemble model comprising of extreme gradient boosted trees, gradient boosted greedy trees and extratrees classifiers

used Recurrent Neural Network achieving an ROC of 80% with 81.12% accuracy outperforming all models based on Neural Networks, SVM, Random Forest and logistic regression on the UCI

UCI dataset developed before it. The research uses entire data of 100,000 readmissions without feature selection and feature engineering, providing much scope for improvement. A novel approach of using Approximate Bayesian BootstrapABB for filling the missing data was also implemented in this research.

, in his research, designed a model using Convolutional Neural Networks (CNN), which was trained after data preprocessing, feature selection, and feature engineering. SMOTE

was used to tackle the problem of an unbalanced dataset by generating random data of patients readmitted within 30 days. The model achieved an accuracy of 92% with an ROC of 95%. The research points out the need for data pruning techniques such as removing the duplicate patient data and outliers in the dataset.

Ching-Yi Lin et al.CYLIN employs several preprocessing techniques such as data cleaning, standardization, log transformations, data balancing, and feature engineering to develop a model using logistic regression, decision trees and random forests. The research found that the number of medicines used, along with high levels of HBA1c, and discharge to another unit in the same hospital had a high correlation with the chances of a patient getting readmitted within 30 days. Random forest using the Gini function outperformed other machine learning algorithms, and achieved accuracy and ROC of 94%.

Pham et al.Pham, after extensive feature selection and feature engineering, proposed an ensemble model consisting of 5 models selected out of 15 models designed, which were variants of logistic regression, Decision trees, Neural networks, and Augmented Naive BayesANB. These models were selected after analyzing their accuracy and their Jaccard similarity to maximize the accuracy and sensitivity of the ensemble model. The ensemble model on an unbalanced dataset achieved an accuracy of 63.5%.

srivastava2014dropout to achieve high overall accuracy and ROC. The research makes use of comprehensive data cleaning, data reduction, and data transformation techniques. Random Forest algorithm is used for feature selection and SMOTESMOTE algorithm for data balancing. The model reports a k-fold cross-validation accuracy and an ROC of 95%.

In Table 1, we summarize the quantitative results of the above previous studies. It includes the model basis, if the dataset had been augmented(Data Aug.) and AUROC. The results of our proposed models are also mentioned (at the top) in the table.

Recently, FastAIhoward2018fastai proposed a tabular data model for structured data, having categorical and continuous features. It combines several state-of-the-art methods such as creating embeddings of optimal sizes for categorical data for training an efficient model and extracting essential features from the structured data.

This research uses the dataset obtained from the Center for Machine Learning and Intelligent Systems at the University of California, IrvineUCI covering 10 years(1998-2008) of Diabetes patient data gathered from 130 US hospitals having 70,000 distinct patientsStrack with over 100,000 records. Every record was labeled as to whether the patient was readmitted within 30 days, readmitted after 30 days, or not readmitted at all.

Categorical variables are passed through an embedding layer. This layer converts each categorical value to a float vector with a dimension given by the formulahoward2018fastai:

where n is the cardinality of the column.

For each categorical column, the embedding matrix has rows corresponding to unique categorical values in the dataset. After this, dropout is applied to the values obtained from the previous operation. The continuous variables are passed through a batch normalization layer. The results from both the continuous and categorical variables are then concatenated and fed to a feedforward network whose architecture is described in Table 2.

This paper’s approach achieves state-of-the-art result on the UCI datasetUCI in determining whether a patient will be readmitted within 30 days or not. In Fig. 3, we plot the roc curve for two classes in our dataset and in Fig. 3

, we present the confusion matrix of our trained model. Overall the model’s accuracy is

The original dataset was severely imbalanced; the availability of data with more samples of the underrepresented class could help mitigate this problem. This would provide more realistic data points than the ones generated by SMOTESMOTE algorithm. Also, there can be experimentation with other machine algorithms to gauge their performance. Furthermore, there can be more analysis of the embedding matrices to help interpret and visualize the distinguishing features. The effect of varying the dimensions of each embedding is another potential area of study.

This research analyzed the readmission patterns of diabetic patients using unsupervised methods and proposes a novel approach of generating embeddings for categorical features such as those of ICD9 codes used while diagnosing the patient. We performed various feature engineering and feature selection strategies along with data augmentation for keeping the issue of unbalanced classes at bay.

To exceed the ROC score of the best existing model, we combined our approach with the best of previous researches to obtain the state-of-the-art ROC of 97.4% and an accuracy of 95.2%. We found that changes in the number of medication administered to a patient play a vital role in determining whether a patient will be readmitted to a hospital within 30 days or not.