Nodes in networks may have one or more functions that determine their role in the system. As opposed to local proximity, which captures the local context of nodes, the role identity captures the functional "role" that nodes play in a network, such as being the center of a group, or the bridge between two groups. This means that nodes far apart in a network can have similar structural role identities. Several recent works have explored methods for embedding the roles of nodes in networks. However, these methods all rely on either approximating or indirect modeling of structural equivalence. In this paper, we present a novel and flexible framework using stress majorization, to transform the high-dimensional role identities in networks directly (without approximation or indirect modeling) to a low-dimensional embedding space. Our method is also flexible, in that it does not rely on specific structural similarity definitions. We evaluated our method on the tasks of node classification, clustering, and visualization, using three real-world and five synthetic networks. Our experiments show that our framework achieves superior results than existing methods in learning node role representations. 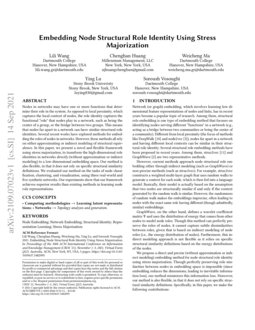 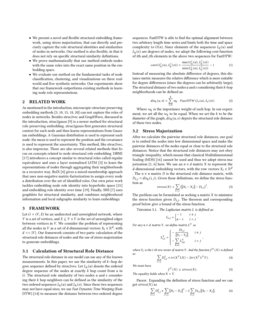 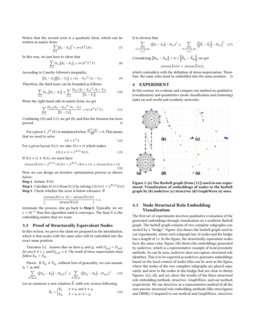 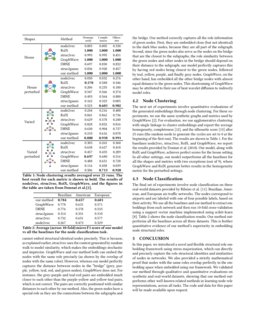 Recently, there has been an interest in embedding networks in hyperbolic...
Lili Wang, et al. ∙

A Survey on Role-Oriented Network Embedding

Structural identity is a concept of symmetry in which network nodes are ...
Leonardo F. R. Ribeiro, et al. ∙

Network (or graph) embedding, which involves learning low dimensional feature representations of nodes and links, has in recent years become a popular topic of research. Among them, structural role embedding is one type of embedding method that focuses on identifying nodes serving different “functions” in a network (e.g., acting as a bridge between two communities or being the center of a community). Different from local proximity (the focus of methods like DeepWalk (Perozzi et al., 2014) and node2vec (Grover and Leskovec, 2016)), nodes far apart in a network and having different local contexts can be similar in their structural role identity. Several structural role embedding methods have been proposed in recent years. Among them, struc2vec (Ribeiro et al., 2017) and GraphWave (Donnat et al., 2018) are two representative methods.

However, current methods approach node structural role embedding either through indirect modeling (such as GraphWave) or non-precise methods (such as struc2vec). For example, struc2vec constructs a weighted multi-layer graph that uses random walks to generate a context for each node, which is then fed into a language model. Basically, their model is actually based on the assumption that two nodes are structurally similar if and only if the context generated by the random walk is similar. However, the randomness of random walk makes the embeddings imprecise, often leading to nodes with the exact same role having different (though admittedly, similar) embeddings.

GraphWave, on the other hand, defines a wavelet coefficient matrix Ψ and uses the distribution of energy that comes from other nodes to model node roles. Though this method can perfectly preserve the roles of nodes, it cannot capture subtle dissimilarities between roles, given that is based on indirect modeling of node roles (i.e., the energy distribution of nodes). Furthermore, this indirect modeling approach is not flexible as it relies on specific structural similarity definitions based on the energy distributions of the nodes.

We propose a direct and precise (without approximation or indirect modeling) embedding method for node structural role identity using stress majorization. Though perfectly preserving role similarities between nodes in embedding space is impossible (since embedding reduces the dimensions, leading to inevitable information loss), our method minimizes this information loss. Moreover, our method is also flexible, in that it does not rely on specific structural similarity definitions. Specifically, in this paper, we make the following contributions:

Let G=(V,E) be an undirected and unweighted network, where V is a set of vertices, and E⊆V×V is the set of unweighted edges between vertices in V. We consider the problem of representing all the nodes in V

as a set of d-dimensional vectors

Xi∈Rd, with d<<|V|. Our framework consists of two parts: calculation of the structural role distances of nodes and the use of stress majorization to generate embeddings.

The structural role distance in our model can use any of the known measurements. In this paper, we use the similarity of k−hop degree sequence defined by struc2vec. Let Lk(u) denote the ordered degree sequence of the nodes at exactly k hop count from u in G. The structural role similarity of two nodes u and v considering their k hop neighbors can be defined as the similarity of the two ordered sequences Lk(u) and Lk(v). Since these two sequences may not have equal sizes, we use Fast Dynamic Time Warping (FastDTW) (Salvador and Chan, 2007) to measure the distance between two ordered degree sequences. FastDTW is able to find the optimal alignment between two arbitrary length time series and limits both the time and space complexity to O(n). Since elements of the sequences Lk(u) and Lk(v) are degrees of nodes, we adopt the following cost function of ith and jth elements in the above two sequences for FastDTW:

Instead of measuring the absolute difference of degrees, this distance metric measures the relative difference which is more suitable for degree differences (since the degrees can be arbitrarily large). The structural distance of two nodes u and v considering their k-hop neighborhoods can be defined as:

Where wk is the importance weight of each hop. In our experiment, we set all the wk to be equal. When we set the k to be the diameter of the graph, disk(u,v) depicts the structural role distance of these two nodes.

The Laplacian matrix L is defined as

For any n×d matrix Y, we define matrix LY as

where Yi is the i-th row vector of matrix Y. And the function fY(X) is defined as

The equality holds when X=Y.

Notice that the second term is a quadratic form, which can be written in matrix form:

In this way, we just have to show that

Therefore, the third term can be bounded as follows

Write the right-hand side in matrix form, we get

For a given Y, fY(X) is minimized when ∂fY(X)∂X=0. This means that we need to solve

terminate the process, else go back to Step 2. Typically, we set ϵ=10−3. Run this algorithm until it converges. The final X is the embedding matrix that we want.

In this section, we prove the claim we proposed in the introduction, which is that nodes with the same roles will be embedded into the exact same position.

If Xi0≠Xj0, without loss of generality, we can assume i0<j0 and

which contradicts with the definition of stress majorization. Therefore, the same roles must be embedded into the same position. ∎

In this section, we evaluate and compare our method on qualitative (visualization) and quantitative (node classification and clustering) tasks on real-world and synthetic networks.

The first set of experiments involves qualitative evaluation of the generated embeddings through visualization on a synthetic Barbell graph. The barbell graph consists of two complete subgraphs connected by a “bridge”. Figure 1(a) shows the barbell graph used in our experiments, where each subgraph has 10 nodes and the bridge has a length of 11. In the figure, the structurally equivalent nodes have the same color. Figure 1(b) shows the embeddings generated by node2vec, which is a representative example of local proximity methods. As can be seen, node2vec does not capture structural role identities. This is to be expected as node2vec generates embeddings based on the local context of nodes (this can be seen in the figure, where the nodes of the two complete subgraphs are placed separately and next to the nodes in the bridge that are close to them). Figures 1(c), (d), and (e), show the results of the three structural role embedding methods, struc2vec, GraphWave, and our method, respectively. We use struc2vec as a representative method of all the non-precise structural role embedding methods (like struc2gauss and DRNE). Compared to our method and GraphWave, struc2vec cannot embed structural identical nodes precisely. This is because, as explained earlier, struc2vec uses the context generated by random walk to model similarity, which makes the embeddings stochastic and imprecise. GraphWave and our method both can embed the nodes with the same role precisely (as shown by the overlap of nodes with the same color). However, whereas our model perfectly captures the distance between nodes in the “bridge” (grey, purple, yellow, teal, red, and green nodes), GraphWave does not. For instance, the grey-purple and teal-red pairs are embedded much closer to each other than the purple-yellow and yellow-teal pairs, which is not correct. The pairs are correctly positioned with similar distances to each other by our method. Also, the green nodes have a special role as they are the connections between the subgraphs and the bridge. Our method correctly captures all the role information of green nodes. First, they are embedded close (but not identical) to the dark blue nodes, because they are all part of the subgraph. Second, since the green nodes also serve as the nodes on the bridge that are the closest to the subgraphs, the role similarity between the green nodes and other nodes in the bridge should depend on their distance to the subgraph; our model perfectly captures this by having red nodes being closest to the green nodes, followed by teal, yellow, purple, and finally gray nodes. GraphWave, on the other hand, has embedded all the other bridge nodes with almost equal distance to the green nodes. This shortcoming of GraphWave may be attributed to their use of heat wavelet diffusion to indirectly model roles.

The next set of experiments involve quantitative evaluations of the generated embeddings through node clustering. For these experiments, we use the same synthetic graphs and metrics used by GraphWave (Donnat et al., 2018). For evaluation, we use agglomerative clustering with single linkage to cluster embeddings and report the average homogeneity, completeness (Rosenberg and Hirschberg, 2007), and the silhouette score (Rousseeuw, 1987) after 25 runs (the random seeds to generate the cycles are set to 0 at the beginning of the first run). The results are shown in Table 1. For the baselines node2vec, struc2vec, RolX, and GraphWave, we report the results provided by Donnat et al. ((2018)). Our model, along with RolX and GraphWave, achieves perfect scores for the house setting. In all other settings, our model outperforms all the baselines for all the shapes and metrics with two exceptions (out of 9), where GraphWave and RolX generate better results in the homogeneity metric for the perturbed settings.

: Brazilian, American, and European air-traffic networks. The nodes correspond to airports and are labeled with one of four possible labels, based on their activity. We use all the baselines and our method to extract embeddings from each network and then run 10-fold cross-validation using a support vector machine implemented using scikit-learn

(Pedregosa et al., 2011). Table 2 shows the node classification results. Our method outperforms all the baselines across all three datasets. This is further quantitative evidence of our method’s superiority in embedding node structural roles.

In this paper, we introduced a novel and flexible structural role embedding framework using stress majorization, which can directly and precisely capture the role structural identities and similarities of nodes in networks. We also provided a strictly mathematical proof that nodes with the same roles overlap perfectly in the embedding space when embedded using our framework. We validated our method through qualitative and quantitative evaluations on synthetic and real-world datasets, showing that our method outperforms other well-known related methods in learning node role representations, across all tasks. The code and data for this paper will be made available upon request.