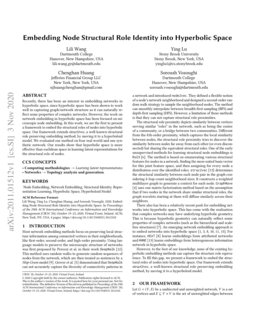 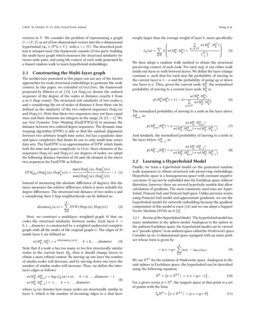 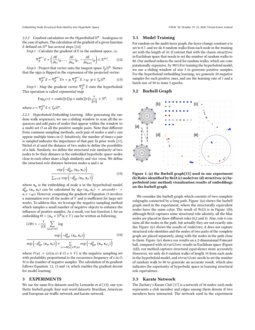 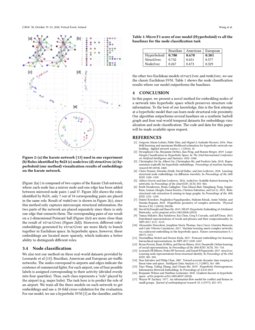 Optimisation of the coalescent hyperbolic embedding of complex networks

Nodes in networks may have one or more functions that determine their ro...
Lili Wang, et al. ∙

Structural identity is a concept of symmetry in which network nodes are ...
Leonardo F. R. Ribeiro, et al. ∙

Most network embedding methods focus on preserving local structure information among connected vertices in their neighborhoods, like first-order, second-order, and high-order proximity. Using language models to preserve the microscopic structure of networks was first proposed by Perozzi et al. in their work DeepWalk (Perozzi et al., 2014). This method uses random walks to generate random sequences of nodes from the network, which are then treated as sentences by a Skip-Gram model (Mikolov et al., 2013). Grover et al. (Grover and Leskovec, 2016) demonstrated that DeepWalk can not accurately capture the diversity of connectivity patterns in a network and introduced node2vec

. They defined a flexible notion of a node’s network neighborhood and designed a second-order random walk strategy to sample the neighborhood nodes. The method can smoothly interpolate between breadth-first sampling (BFS) and depth-first sampling (DFS). However, a limitation of these methods is that they can not capture structural role proximities.

. The method is based on enumerating various structural features for nodes in a network, finding the more suited basis vector for this joint feature space, and then assigning for every node a distribution over the identified roles.

struc2vec (Ribeiro et al., 2017) determines the structural similarity between each node pair in the graph considering k-hop count neighborhood sizes. It constructs a weighted multilayer graph to generate a context for each node. GraphWave (Donnat et al., 2018) uses one matrix factorization method based on the assumption that if two nodes in the network share similar structural roles, the graph wavelets starting at them will diffuse similarly across their neighbors.

Let G=(V,E) be a undirected and unweighted network, V is a set of vertices and E⊆V×V is the set of unweighted edges between vertices in V. We consider the problem of representing a graph G=(V,E) as set of low-dimensional vectors into the n-dimensional hyperboloid {xv∈Hn|v∈V}, with n<<|V|. The described problem is unsupervised. Our framework consists of two parts: building the multi-layer graph which measures the structural similarity between node pairs, and using the context of each node generated by a biased random walk to learn hyperboloid embeddings.

The architecture presented in this paper can use any of the known approaches for node structural embeddings to generate the node context. In this paper, we extended struct2vec, the framework proposed by Ribeiro et al. (Ribeiro et al., 2017). Let Hopk(u) denote the ordered sequence of the degree of the nodes at distance exactly k from u in G (hop count). The structural role similarity of two nodes u and v considering the set of nodes of distance k from them can be defined as the similarity of the two ordered sequences Hopk(u) and Hopk(v). Note that these two sequences may not have equal sizes and their elements are integers in the range [0,|G|−1]. We use Fast Dynamic Time Warping (FastDTW)(Salvador and Chan, 2007) to measure the distance between two ordered degree sequences. The dynamic time warping algorithm (DTW) is able to find the optimal alignment between two arbitrary length time series, but has a quadratic time and space complexity that limits its use to only small time series data sets. The FastDTW is an approximation of DTW which limits both the time and space complexity to O(n). Since elements of the sequences Hopk(u) and Hopk(v) are degrees of nodes, we adopt the following distance function of ith and jth element in the above two sequences for FastDTW as follows:

Instead of measuring the absolute difference of degrees, this distance measures the relative difference which is more suitable for degree differences. The structural role distance of two nodes u and v considering their k-hop neighborhoods can be defined as:

Next, we construct a multilayer weighted graph M that encodes the structural similarity between nodes. Each layer k=0,1...,diameter is constructed by a weighted undirected complete graph with all the nodes of the original graph G. The edges of M inside layer k are defined as:

where Lk(u) denotes how many nodes are structurally similar in layer k, which is the number of incoming edges to u that have weight larger than the average weight of layer k, more specifically:

We then adopt a random walk method to obtain the structural preserving context of each node. For each step, it can either walk inside one layer or walk between layers. We define the layer-change constant α

, such that for each step the probability of staying in the current layer is

1−α and the probability of going up or down one layer is α. Thus, given the current node Muk, the normalized probability of moving to a current layer node Mvk is:

The normalized probability of moving to a node in the layer above, Muk+1, is:

And similarly, the normalized probability of moving to a node in the layer below, Muk−1, is:

Finally, we train a hyperboloid model on the generated random walk sequences to obtain structural role preserving embeddings. Hyperbolic space is a homogeneous space with constant negative curvature. It can not be embedded into the Euclidean space without distortion, however, there are several hyperbolic models that allow calculation of gradients. The most commonly used ones are hyperboloid, Poincaré ball, and Poincaré half-space. Unlike previous works using Poincaré ball model and approximate gradients, we use the hyperboloid model for network embedding because the gradient computation of this model is exact (Wilson and Leimeister, 2018)

and we can adopt a Support Vector Machine (SVM) on it

2.2.1. Review of the Hyperboloid Model

We use Rn:1 for the notation of Minkowski space. Analogous to the unit sphere in Euclidean space, the hyperboloid can be described using the following equation:

For a given vector p∈Hn, the tangent space at that point is a set of points with the form

2.2.2. Gradient calculation on the Hyperboloid Hn

Analogous to the case of sphere, The calculation of the gradient of a given function E defined on Hn has several steps (Wilson and Leimeister, 2018).

Step1: Calculate the gradient of E in the ambient space, i.e.

Step2: Project that vector onto the tangent space TpHn. Notice that the sign is flipped in the expression of the projected vector:

Step3: Map the gradient vector ∇HnpE onto the hyperboloid. This operation is called exponential map.

After generating the random walk sequences, we use a sliding window to scan all the sequences and add pairs of nodes that appear within the window to a multi-set O as all the positive sample pairs. Note that different from common sampling methods, each pair of nodes u and v can appear multiple times in O. Intuitively, the number of times a pair is sampled indicates the importance of that pair. In prior work (Nickel and Kiela, 2017), Nickel et al used the distance of two nodes to define the possibility of a link. Similarly, we define the structural role similarity of two nodes to be their distance in the embedded hyperbolic space: nodes close to each other share a high similarity and vice versa. We define the structural role distance between nodes u and v as

where xu is the embedding of node u in the hyperboloid model. d2Hn(xu,xv) can be calculated by dHn(xu,xv)=arccosh(−<u,v>M). However, computing the gradient of Equation 15 involves a summation over all the nodes of V

and is inefficient for large networks. To address this, we leverage the negative sampling method which samples a small number of negative objects to enhance the influence of positive samples. As a result, our loss function

L for an embedding Θ={xu∈Hn|u∈V} can be written as following:

where P(u):={v|(u,v)∉O,v∈V} is the negative sampling set with probability proportional to the occurrence frequency of v in O, M is the number of negative samples. The calculation of its gradient follows Equation. 12, 13 and 14, which enables the gradient decent for model learning.

For random on the multi-layer graph, the layer-change constant α

is set to 0.7, and we do 8 random walks from each node in the training set with the length of 10. (Contrast that with the classic struct2vec in Euclidean space that needs to set the number of random walks to 80. Our method reduces the need for random walks, which are computationally expensive, by 90%) For training the hyperboloid model, we use a sliding window of size 3 to generate positive samples. For the hyperboloid embedding learning, we generate 20 negative samples for each positive ones, and use the learning rate of 1 and a batch size of 50 to train 5 epochs.

We consider the barbell graph which consists of two complete subgraphs connected by a long path. Figure 1(a) shows the barbell graph used in the experiment, where the structurally equivalent nodes have the same color. The result of RolX is in Figure 1(b), although RolX captures some structural role identity, all the blue nodes are placed in three different roles (0,2 and 5). Also, role 4 contains all the nodes in the path, but actually they are not exactly similar. Figure 1(c) shows the results of node2vec, it does not capture structural role identities and the nodes of two parts of the complete graph are placed separately, along with the nodes in the path close to them. Figure 1(e) shows our results on a 2-dimensional Poincaré ball, compared with struct2vec results in Euclidean space (Figure 1(d)), our method captures structural equivalence more accurately. Moreover, we only do 8 random walks of length 10 from each node in the hyperboloid model, and struct2vec needs to set the number of random walk to 80 to generate an accurate result, which also indicates the superiority of hyperbolic space in learning structural role equivalence.

The Zachary’s Karate Club (Zachary, 1977) is a network of 34 nodes: each node represents a club member and edges among them denote if two members have interacted. The network used in the experiment (Figure 2(a) ) is composed of two copies of the Karate Club network, where each node has a mirror node and one edge has been added between mirrored node pairs 1 and 37. Figure 2(b) shows the roles identified by RolX, only 7 out of 34 corresponding pairs are placed in the same role. Result of node2vec is shown in Figure 2(c), since this method only captures microscopic structural information, the two parts of the network are placed separately since there is only one edge that connects them. The corresponding pairs of our result on a 2-dimensional Poincaré ball (Figure 2(e)) are more close than the result of struct2vec (Figure 2(d)). Moreover, different roles’ embeddings generated by struct2vec are more likely to bunch together in Euclidean space. In hyperbolic space, however, these embeddings are located more sparsely, which indicates a better ability to distinguish different roles.

: Brazilian, American and European air-traffic networks. The nodes correspond to airports and edges indicate the existence of commercial fights. For each airport, one of four possible labels is assigned corresponding to their activity (divided evenly into four quartiles). Thus, each class represents a ”role” played by the airport (e.g, major hubs). The task here is to predict the role of an airport. We train all the three models on each network to get embeddings and use a 10-fold cross-validation for the evaluation. For our model, we use a hyperbolic SVM

as the classifier, and for the other two Euclidean models

struct2vec and node2vec, we use the classic Euclidean SVM. Table 1 shows the node classification results where our model outperforms the baselines.

In this paper, we present a novel method for embedding nodes of a network into hyperbolic space which preserves structure role information. To the best of our knowledge, this is the first attempt at a hyperbolic model that can learn node structural role proximity. Our algorithm outperforms several baselines on a synthetic barbell graph and four real-world temporal datasets for embeddings visualization and node classification. The code and data for this paper will be made available upon request.