A stochastic hybrid system, also known as a switching diffusion, is a continuous-time Markov process with state space consisting of discrete and continuous parts. We consider parametric estimations of the Q matrix for the discrete state transitions and of the drift coefficient for the diffusion part based on a partial observation where the continuous state is monitored continuously in time, while the discrete state is unobserved. Extending results for hidden Markov models developed by Elliot et al. [1], we derive a finite-dimensional filter and the EM algorithm for stochastic hybrid systems. 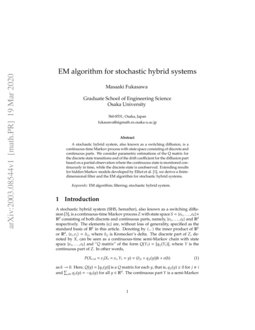 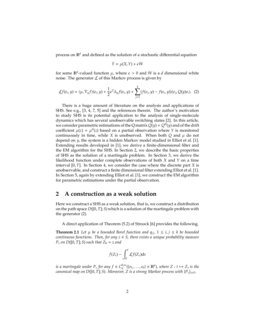 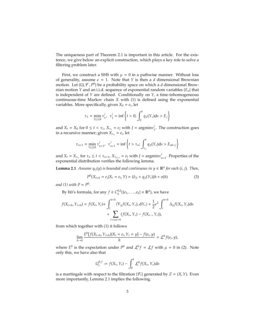 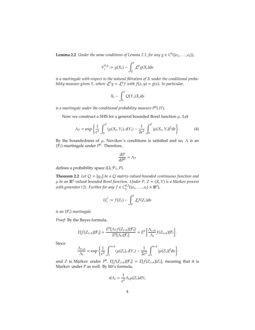 Decisiveness of Stochastic Systems and its Application to Hybrid Models

Stochastic Resonance for a Model with Two Pathways

In this thesis we consider stochastic resonance for a diffusion with dri...
Tommy Liu, et al. ∙

A stochastic hybrid system (SHS, hereafter), also known as a switching diffusion [3], is a continuous-time Markov process Z with state space S={e1,…,ek}×Rd consisting of both discrete and continuous parts, namely, {e1,…,ek} and Rd respectively. The elements {ei} are, without loss of generality, specified as the standard basis of Rk in this article. Denoting by ⟨⋅,⋅⟩ the inner product of Rk or Rd, ⟨ei,ej⟩=δij, where δij is Kronecker’s delta. The discrete part of Z, denoted by X

, can be seen as a continuous-time semi-Markov chain with state space

as h→0. Here, Q(y)=[qij(y)] is a Q matrix for each y, that is, qji(y)≥0 for j≠i and ∑j≠iqji(y)=−qii(y) for all y∈Rd. The continuous part Y is a semi-Markov process on Rd and defined as the solution of a stochastic differential equation

for some Rd-valued function μ, where ϵ>0 and ˙W is a d

L of this Markov process is given by

There is a huge amount of literature on the analysis and applications of SHS. See e.g., [3, 4, 7, 5] and the references therein. The author’s motivation to study SHS is its potential application to the analysis of single-molecule dynamics which has several unobservable switching states [2]. In this article, we consider parametric estimations of the Q matrix Q(y)=Qθ(y) and of the drift coefficient μ(z)=μθ(z) based on a partial observation where Y is monitored continuously in time, while X is unobserved. When both Q and μ do not depend on y, the system is a hidden Markov model studied in Elliot et al. [1]. Extending results developed in [1], we derive a finite-dimensional filter and the EM algorithm for the SHS. In Section 2, we describe the basic properties of SHS as the solution of a martingale problem. In Section 3, we derive the likelihood function under complete observations of both X and Y on a time interval [0,T]. In Section 4, we consider the case where the discrete part X is unobservable, and construct a finite dimensional filter extending Elliot et al. [1]. In Section 5, again by extending Elliot et al. [1], we construct the EM algorithm for parametric estimations under the partial observation.

2 A construction as a weak solution

Here we construct a SHS as a weak solution, that is, we construct a distribution on the path space D([0,T];S) which is a solution of the martingale problem with the generator (2).

A direct application of Theorem (5.2) of Stroock [6] provides the following.

Let μ be a bounded Borel function and qij, 1≤i,j≤k be bounded continuous functions. Then, for any z∈S

, there exists a unique probability measure

The uniqueness part of Theorem 2.1 is important in this article. For the existence, we give below an explicit construction, which plays a key role to solve a filtering problem later.

and an i.i.d. sequence of exponential random variables

{En} that is independent of Y are defined. Conditionally on Y, a time-inhomogeneous continuous-time Markov chain X with (1) is defined using the exponential variables. More specifically, given X0=ei, let

. Properties of the exponential distribution verifies the following lemma.

Assume qij(y) is bounded and continuous in y∈Rd for each (i,j). Then,

from which together with (1) it follows

is a martingale with respect to the filtration {Ft} generated by Z=(X,Y). Even more importantly, Lemma 2.1 implies the following.

is a martingale with respect to the natural filtration of X under the conditional probability measure given Y, where L0g=L0f with f(x,y)=g(x). In particular,

is a martingale under the conditional probability measure P0(⋅|Y).

Now we construct a SHS for a general bounded Borel function μ. Let

By the boundedness of μ, Novikov’s conditions is satisfied and so, Λ is an {Ft}-martingale under P0. Therefore,

Let Q=[qij] be a Q matrix-valued bounded continuous function and μ be an Rd-valued bounded Borel function. Under P, Z=(X,Y) is a Markov process with generator (2). Further for any f∈C0,2b({e1,…,ek}×Rd),

is an {Ft} martingale.

Proof: By the Bayes formula,

Under the same condition of Theorem 2.2,

By the uniqueness result of Theorem 2.1, the law of Z under P coincides with Pz with z=Z0.

3 The likelihood under complete observations

Here we consider a statistical model {Pθ}θ∈Θ and derive the likelihood under complete observation of a sample path Z=(X,Y) on a time interval [0,T]. For each θ∈Θ, Pθ denotes the distribution on D([0,T];S) induced by a Markov process Z with generator

Let θ,θ0∈Θ and assume that

where Nji is the counting process of the transition from ei to ej:

Proof: The proof is standard but given for the readers’ convenience. Let

It only remains to show that EUθ,f is a martingale under Pθ0 for any f∈C0,2b, where

Here we extend the filtering theory of hidden Markov models developed by Elliot et al. [1] to the SHS

where V is a martingale (recall Corollary 2.1). In this section we assume we observe only a continuous sample path Y on a time interval [0,T] while X is hidden. The system is a hidden Markov model in [1] when both Q and μ do not depend on Y. By this dependence, V is not independent of W and so, the argument in [1] cannot apply here any more. We however show in this and the next sections that the results in [1] remain valid. Namely, a finite-dimensional filter and the EM algorithm can be constructed for the SHS. A key for this is Lemma 2.2.

Denote by FY the natural filtration of Y. The filtering problem is to infer X from the observation of Y, that is, to compute E[Xt|FYt]. The smoothing problem is to compute E[Xt|FYT] for t≤T. Denote E0t[H]=E0[H|FYt] for a given integrable random variable H, where E0 is the expectation under P0 in Section 2. For a given process H, the Bayes formula gives

Under the same conditions of Theorem 2.2, if H is of the form

where α,β,δ are bounded predictable processes, then

Take the conditional expectation under P0 given FYt to get (9). Here, we have used the fact that Y/ϵ is a d dimensional Brownian motion under P0 as well as Lemma 2.2. ////

) is a linear equation on the vector valued process

This is also a linear equation and so, the smoothing problem E[Xτ|FYT] is easily solved via (7).

Here we consider again the parametric family {Pθ} introduced in Section 3. We assume that a continuous sample path Y is observed on a time interval [0,T] while X is hidden. We construct the EM algorithm to estimate θ. Under the same assumptions as in Theorem 3.1, the law of Y under Pθ is equivalent to that under Pθ0 and the log likelihood function is given by

The maximum likelihood estimator is therefore given by

Note that ^θ does not depend on the choice of θ0 because by the Bayes formula,

for any θ1∈Θ. Now, we recall the idea of the EM algorithm. Let

which means that the sequence defined by

makes LY(θn,θ0) increasing. Under an appropriate condition the sequence {θn} converges to the maximum likelihood estimator ^θ, for which we refer to Wu [8].

The computation of Q(θ,θ0) is a filtering problem for which can apply the results in Section 3. Now we state the main result of this article.