In burst-mode communication systems, the quality of frame synchronization (FS) at receivers significantly impacts the overall system performance. To guarantee FS, an extreme learning machine (ELM)-based synchronization method is proposed to overcome the nonlinear distortion caused by nonlinear devices or blocks. In the proposed method, a preprocessing is first performed to capture the coarse features of synchronization metric (SM) by using empirical knowledge. Then, an ELM-based FS network is employed to reduce system's nonlinear distortion and improve SMs. Experimental results indicate that, compared with existing methods, our approach could significantly reduce the error probability of FS while improve the performance in terms of robustness and generalization. 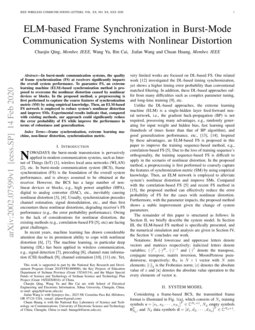 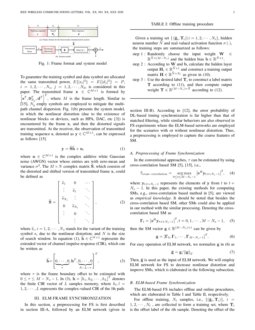 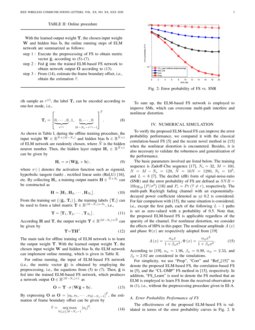 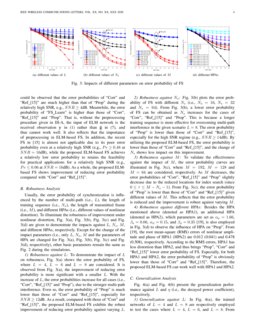 To reduce the contour error of the end-effector of a robotic manipulator...
Zhu Dachang, et al. ∙

In the description of quantum key distribution systems, much attention i...
Anton Pljonkin, et al. ∙

The goal of this survey paper is to provide an introduction to chaos syn...
Mohamed Camil Belhadjoudja, et al. ∙

Nowadays the burst-mode transmission is pervasively applied in modern communication systems, such as Internet of Things (IoT) [1], wireless local area networks (WLAN) [2], etc. In burst-mode communication system (BCS), frame synchronization (FS) is the foundation of the overall system performance, and is always assumed to be obtained at the receiver. However, the BCS has a large number of non-linear devices or blocks, e.g., high power amplifier (HPA), digital to analog converter (DAC), etc., inevitably causing nonlinear distortion [3], [4]

In recent years, machine learning has drawn considerable attention due to its prominent ability to cope with nonlinear distortion

Unlike the DL-based approaches, the extreme learning machine (ELM) is a single-hidden layer feed-forward neural network, i.e., the gradient back-propagation (BP) is not required, possessing many advantages, e.g., randomly generating for input weight and hidden bias, fast learning speed (hundreds of times faster than that of BP algorithm), and good generalization performance, etc.,

[13], [14]. Inspired by these advantages, an ELM-based FS is proposed in this paper to improve the training sequence-based method, e.g., correlation-based FS [5]. Due to the loss of training sequence’s orthogonality, the training sequence-based FS is difficult to apply in the scenario of nonlinear distortion. In the proposed method, a preprocessing is first performed to coarsely capture the features of synchronization metric (SM) by using empirical knowledge. Then, an ELM network is employed to alleviate system’s nonlinear distortion and improve SMs. Compared with the correlation-based FS [5] and recent FS method in [15], the proposed method can effectively reduce the error probability of FS for the cases with nonlinear distortion. Furthermore, with the parameter impacts, the proposed method shows a stable improvement given the change of system parameters.

The remainder of this paper is structured as follows: In Section ii@, we briefly describe the system model. In Section iii@, the ELM-based FS method is specifically presented, and the numerical simulation and analysis are given in Section iv@, the Section v@ concludes our work.

Considering a frame-based BCS, the transmitted frame format is illustrated in Fig. 1(a), which consists of Ns training symbols s=[s1,s2,⋯,sNs]T∈CNs×1, Ng empty symbols 0TNg, and Nd data symbols d=[d1,d2,⋯,dNd]T∈CNd×1. To guarantee the training symbol and data symbol are allocated the same transmitted power, E{|si|2}=E{|dj|2}=P, i=1,2,⋯,Ns, j=1,2,⋯,Nd, is considered in this paper. The transmitted frame x∈CM×1 is formed by [sT,0TNg,dT]T, where M is the frame length. Similar to [15], Ng empty symbols are employed to mitigate the multi-path channel dispersion. Fig. 1(b) presents the system model, in which the nonlinear distortion (due to the existence of nonlinear blocks or devices, such as HPA, DAC, etc [3]) is encountered by the frame x, and then the distorted signals are transmitted. At the receiver, the observation of transmitted training sequence s, denoted as y∈CM×1, can be expressed as follows [15]

σ2. The M×N complex matrix ˜S, which consists of the distorted and shifted version of transmitted frame x, could be defined as

where ˜si,i=1,2,⋯,Ns stands for the variant of the training symbol si due to the nonlinear distortion, and N is the size of search window. In equation (1), ˜h∈CN×1 represents the extended vector of channel impulse response (CIR), which can be written as

where τ is the frame boundary offset to be estimated with 0≤τ≤M−Ns−1. In (3), h=[h1,h2,⋯,hL]T denotes the finite CIR vector of L samples memory, where hl,l=1,2,⋯,L represents the complex-valued CIR of the lth path.

In this section, a preprocessing for FS is first described in section III-A, followed by an ELM network (given in section III-B). According to [12], the error probability of DL-based timing synchronization is far higher than that of matched filtering, while similar behaviors are also observed in FS experiments where the ELM-based networks are employed for the scenarios with or without nonlinear distortion. Thus, a preprocessing is employed to capture the coarse features of SM.

In the conventional approaches, τ can be estimated by using cross-correlation based SM [5], [15], i.e.,

For easy operation of ELM network, we normalize g in (6) as

Then, ¯g is used as the input of ELM network. We will employ ELM network for FS to decrease nonlinear distortion and improve SMs, which is elaborated in the following subsection.

The ELM-based FS includes offline and online procedures, which are elaborated in Table I and Table II, respectively.

For offline training, Nt samples, i.e., {(¯gi,Ti)}, i=1,2,⋯,Nt , are collected to form a training set, where Ti is the offset label of the ith sample. Denoting the offset of the ith sample as τ(i), the label Ti can be encoded according to one-hot mode, i.e.,

As shown in Table I, during the offline training procedure, the input weight W∈R˜N×(M−Ns) and hidden bias b∈R˜N×1 of ELM network are randomly chosen, where ˜N is the hidden neuron number. Then, the hidden layer output Hi∈R˜N×1 can be given by

[16], etc. By collecting Hi, a training output matrix H∈˜N×Nt can be constructed as

According H and T, the output weight Υ∈R(M−Ns)×˜N can be given by

By expressing O as O=[o0,o1,⋯,oM−Ns−1]T, the estimation of frame boundary offset can be given by

To sum up, the ELM-based FS network is employed to improve SMs, which can overcome multi-path interfere and nonlinear distortion.

To verify the proposed ELM-based FS can improve the error probability performance, we compared it with the classical correlation-based FS [5] and the recent novel method in [15] when the nonlinear distortion is encountered. Besides, it is also necessary to validate the robustness and generalization of the performance.

The basic parameters involved are listed below. The training sequence is Zadoff-Chu sequence [17], Ns=32, M=160, N=M−Ns=128, ˜N=10N=1280, Nt=105, and L=8 [7]. The decibel (dB) form of signal-noise-ratio (SNR) and the error probability of FS are defined as SNR=10log10(P/σ2) [18] and Pe=Pr(ˆτ≠τ), respectively. The multi-path Rayleigh fading channel with an exponentially-decayed power coefficient (denoted as η) 0.2 is considered. For fair comparison with [15], the same situation is considered, i.e., except the first path, each of the following L−1 paths is set as zero-valued with a probability of 0.5. Note that, the proposed ELM-based FS is applicable regardless of the sparsity of the channel. For nonlinear distortion, we consider the effects of HPA in this paper. The nonlinear amplitude A(x) and phase Φ(x) are respectively adopted from [19]

For simplicity, we use “Prop”, “Corr” and “Ref_[15]” to denote the proposed ELM-based FS, the correlation-based FS in [5], and the “CL-OMP” FS method in [15], respectively. In addition, “FS_Learn” is used to denote the FS method that an ELM is employed to learn FS from the received observation y in (1), i.e., without the preprocessing procedure given in III-A.

Usually, the error probability of synchronization is influenced by the number of multi-path (i.e., L), the length of training sequence (i.e., Ns), the length of transmitted frame (i.e., M), and different HPAs (i.e., different values of nonlinear distortion). To illuminate the robustness of improvement under nonlinear distortion, Fig. 3(a), Fig. 3(b), Fig. 3(c) and Fig. 3(d) are given to demonstrate the impacts against L, Ns, M, and different HPAs, respectively. Except for the change of the impact parameters (i.e., only L, Ns, M and the parameters of HPA are changed for Fig. 3(a), Fig. 3(b), Fig. 3(c) and Fig. 3(d), respectively), other basic parameters remain the same as Fig. 2 during the simulations.

Fig. 4(a) and Fig. 4(b) present the generalization performance against L and η (i.e., the decayed power coefficient), respectively.

In this work, we investigated the ELM-based FS to improve the performance of burst-mode communication systems. A preprocessing is first performed to capture the coarse features of SM, followed by an ELM network to reduce system’s nonlinear distortion and recover SMs. Compared with the existing methods, the proposed ELM-based FS is validated with its robustness and generalization by reducing error probability. In this paper, the difficulty of obtaining desired labels is simplified by generating them according to the existing channel model. In our future works, we will consider the desired FS labels in real channel scenarios to promote the application of machine learning-based FS in practical systems (such as IoT, WLAN, etc) with nonlinear-distortion.