The ordered weighted averaging (OWA) operators play a crucial role in aggregating multiple criteria evaluations into an overall assessment supporting the decision makers' choice. One key point steps is to determine the associated weights. In this paper, we first briefly review some main methods for determining the weights by using distribution functions. Then we propose a new approach for determining OWA weights by using the RIM quantifier. Motivated by the idea of normal distribution-based method to determine the OWA weights, we develop a method based on elliptical distributions for determining the OWA weights, and some of its desirable properties have been investigated. 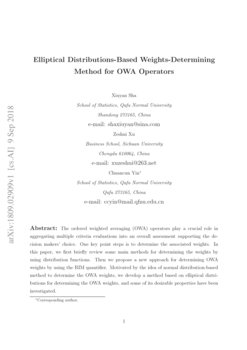 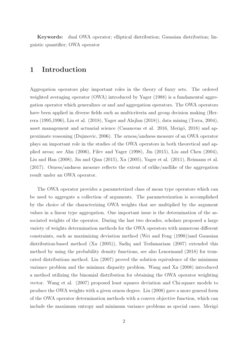 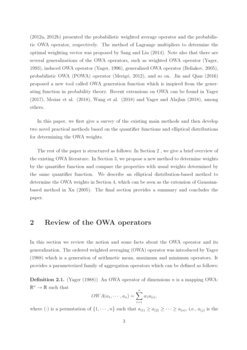 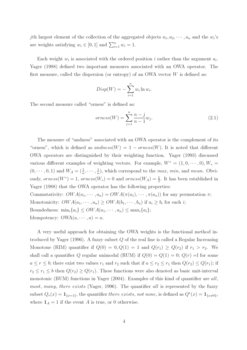 Aggregation operators play important roles in the theory of fuzzy sets. The ordered weighted averaging operator (OWA) introduced by Yager (1988) is a fundamental aggregation operator which generalizes or and and aggregation operators. The OWA operators have been applied in diverse fields such as multicriteria and group decision making (Herrera (1995,1996), Liu et al. (2018), Yager and Alajlan (2018)), data mining (Torra, 2004), asset management and actuarial science (Casanovas et al. 2016, Merigó, 2018) and approximate reasoning (Dujmovic, 2006). The orness/andness measure of an OWA operator plays an important role in the studies of the OWA operators in both theoretical and applied areas; see Ahn (2006), Filev and Yager (1998), Jin (2015), Liu and Chen (2004), Liu and Han (2008), Jin and Qian (2015), Xu (2005), Yager et al. (2011), Reimann et al. (2017). Orness/andness measure reflects the extent of orlike/andlike of the aggregation result under an OWA operator.

The OWA operator provides a parameterized class of mean type operators which can be used to aggregate a collection of arguments. The parameterization is accomplished by the choice of the characterizing OWA weights that are multiplied by the argument values in a linear type aggregation. One important issue is the determination of the associated weights of the operator. During the last two decades, scholars proposed a large variety of weights determination methods for the OWA operators with numerous different constraints, such as maximizing deviation method (Wei and Feng (1998))and Gaussian distribution-based method (Xu (2005)), Sadiq and Tesfamariam (2007) extended this method by using the probability density functions, see also Lenormand (2018) for truncated distributions method. Liu (2007) proved the solution equivalence of the minimum variance problem and the minimax disparity problem. Wang and Xu (2008) introduced a method utilizing the binomial distribution for obtaining the OWA operator weighting vector. Wang et al. (2007) proposed least squares deviation and Chi-square models to produce the OWA weights with a given orness degree. Liu (2008) gave a more general form of the OWA operator determination methods with a convex objective function, which can include the maximum entropy and minimum variance problems as special cases. Merigó (2012a, 2012b) presented the probabilistic weighted average operator and the probabilistic OWA operator, respectively. The method of Lagrange multipliers to determine the optimal weighting vector was proposed by Sang and Liu (2014). Note also that there are several generalizations of the OWA operators, such as weighted OWA operator (Yager, 1993), induced OWA operator (Yager, 1996), generalized OWA operator (Beliakov, 2005), probabilistic OWA (POWA) operator (Merigó, 2012), and so on. Jin and Qian (2016) proposed a new tool called OWA generation function which is inspired from the generating function in probability theory. Recent extensions on OWA can be found in Yager (2017), Mesiar et al. (2018), Wang et al. (2018) and Yager and Alajlan (2018), among others.

In this paper, we first give a survey of the existing main methods and then develop two novel practical methods based on the quantifier functions and elliptical distributions for determining the OWA weights.

The rest of the paper is structured as follows: In Section 2 , we give a brief overview of the existing OWA literature. In Section 3, we propose a new method to determine weights by the quantifier function and compare the properties with usual weights determined by the same quantifier function. We describe an elliptical distribution-based method to determine the OWA weights in Section 4, which can be seen as the extension of Gaussian-based method in Xu (2005). The final section provides a summary and concludes the paper.

2 Review of the OWA operators

In this section we review the notion and some facts about the OWA operator and its generalization. The ordered weighted averaging (OWA) operator was introduced by Yager (1988) which is a generation of arithmetic mean, maximum and minimum operators. It provides a parameterized family of aggregation operators which can be defined as follows:

Each weight wi is associated with the ordered position i rather than the argument ai. Yager (1988) defined two important measures associated with an OWA operator. The first measure, called the dispersion (or entropy) of an OWA vector W is defined as:

The second measure called “orness” is defined as:

The measure of “andness” associated with an OWA operator is the complement of its “orness”, which is defined as andness(W)=1−orness(W). It is noted that different OWA operators are distinguished by their weighting function. Yager (1993) discussed various different examples of weighting vectors. For example, W∗=(1,0,⋯,0),W∗=(0,⋯,0,1) and WA=(1n,⋯,1n), which correspond to the max, min, and mean. Obviously, orness(W∗)=1, orness(W∗)=0 and orness(WA)=12. It has been established in Yager (1988) that the OWA operator has the following properties: Commutativity: OWA(a1,⋯,an)=OWA(π(a1),⋯,π(an)) for any permutation π; Monotonicity: OWA(a1,⋯,an)≥OWA(b1,⋯,bn) if ai≥bi for each i; Boundedness: mini{ai}≤OWA(a1,⋯,an)≤maxi{ai}; Idempotency: OWA(a,⋯,a)=a.

Given a RIM quantifier, Yager (1988) generated the OWA weights by

The quantifier guided aggregation with the OWA operator is

where a(j) is the jth largest element of the collection of the aggregated objects a1,a2,⋯,an. We refer the reader to Yager (1988) for the definition and more examples.

Yager (1996) extended the orness measure of the OWA operator (2.1), and defined the orness of a RIM quantifier:

A number of different methods have been suggested for obtaining the weights associated with the OWA operator (Xu, 2005). Moreover, Xu (2005) introduced a procedure for generating the OWA weights based on the normal distribution (or Gaussian distribution). Consider a normal distribution N(μn,σ2n), where

The associated OWA weights is defined as:

It is clear that wi∈[0,1] and ∑ni=1wi=1 and wi is symmetric, that is, wi=wn+1−i. The prominent characteristic of the developed method is that it can relieve the influence of unfair arguments on the decision results by assigning low weights to those “false” or “biased” ones.

3 Determine weights by the quantifier function

Definition 3.1. Let Q be a RIM quantifier. An ˜OWAQ operator of dimension n is a mapping ˜OWAQ: Rn→R such that

where a(j) is the jth largest element of the collection of the aggregated objects a1,a2,⋯,an and the ~wi’s are weights satisfying

The orness of a RIM quantifier is defined as:

where the weight ~qi is defined as:

The ˜WOWA operator can also be written as:

The following property was considered for orness(Q) and WOWAP,Q in Liu and Han (2008).

On the other hand, letting ai=1,aj=0,j≠i, then from the nonnegativity of

from which we get

Note that the identity quantifier is the smallest concave RIM quantifier and also the largest convex RIM quantifier, and when Q(x)=x, orness(Q)=12, ˜OWAQ(a1,⋯,an)=1n∑ni=1ai, we can easily get the following from Corollary 3.1:

For any RIM quantifier Q, we have

For two RIM quantifiers Q and G, the following two sufficient conditions for Q≥G were proposed on generating functions in Liu (2005):

A special class of the OWA operator with monotonic weights was investigated by Liu and Chen (2004). The following gives the relationship between monotonic weights and the concavity/convexity of RIM quantifier. Let us start with the standard definitions of convexity and concavity.

Proof.  If Q is convex, then

If Q is concave, then

This ends the proof of Theorem 3.2.

Letting pi≡1n,i=1,2,⋯,n, we get the following corollary.

Let w be a weighting vector generated by the quantifier Q. We define

Xu (2005) introduced a procedure for generating the OWA weights based on the normal distribution (or Gaussian distribution). Yager (2007) referred to these as Gaussian weights and was described in the following. This is a specific case of the centered OWA operators. Consider a normal distribution N(μn,σ2n), where

The associated OWA weights are defined as:

The Xu’s method on the normal type OWA weighting vector inspires us to consider a more general class of OWA aggregation operators of this type. We shall refer to these as elliptical OWA operators.

be the continuous random variable, we say

X belonging to the class of elliptical distributions if its density can be expressed as:

for some so-called density generator g (which is a function of non-negative variables) satisfying the condition:

and a normalizing constant C given by

It can be shown that these weights satisfy the conditions wi∈[0,1] and ∑ni=1wi=1.

is odd, then the weight

and note that g is non-increasing, then

The result follows since the function f(x)=x/(a+x),x>0 is increasing function, where a>0 is a constant.

As pointed out by Su et al. (2016), the above method is simple and straightforward, but sometimes there exists some problems in actual applications. For example, the same value may have different weights because of their different positions; For details see Su et al. (2016). In order to avoid the issue above, Wang and Xu (2008) introduced a weighting method for the weighted arithmetic aggregation (WAA) operator, which is based on the normal probability density function and the given arguments simultaneously: Given a collection of n preference values aj(j=1,2,⋯,n), and let w=(w1,w2,⋯,wn) be the weighting vector of the WAA operator, then Wang and Xu (2008) gave the following formula:

is the standard deviation of

Motivated by the method above, for any density generator g, we define