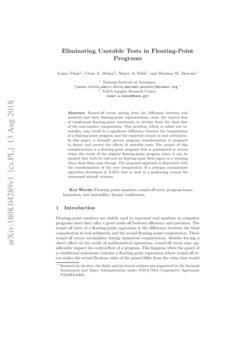 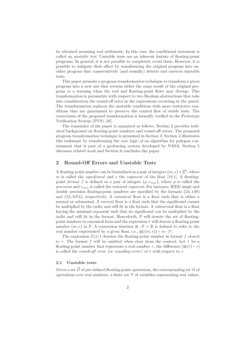 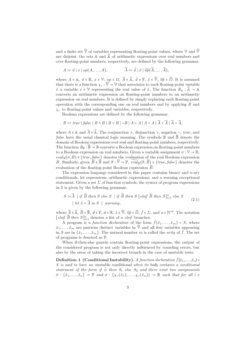 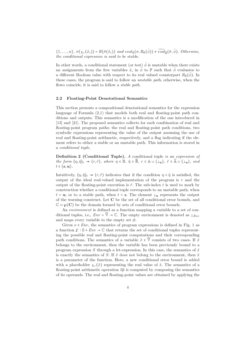 Floating-point numbers are widely used to represent real numbers in computer programs since they offer a good trade-off between efficiency and precision. The round-off error of a floating-point expression is the difference between the ideal computation in real arithmetic and the actual floating-point computation. These round-off errors accumulate during numerical computations. Besides having a direct effect on the result of mathematical operations, round-off errors may significantly impact the control flow of a program. This happens when the guard of a conditional statement contains a floating-point expression whose round-off error makes the actual Boolean value of the guard differ from the value that would be obtained assuming real arithmetic. In this case, the conditional statement is called an unstable test. Unstable tests are an inherent feature of floating-point programs. In general, it is not possible to completely avoid them. However, it is possible to mitigate their effect by transforming the original program into another program that conservatively (and soundly) detects and corrects unstable tests.

This paper presents a program transformation technique to transform a given program into a new one that returns either the same result of the original program or a warning when the real and floating-point flows may diverge. This transformation is parametric with respect to two Boolean abstractions that take into consideration the round-off error in the expressions occurring in the guard. The transformation replaces the unstable conditions with more restrictive conditions that are guaranteed to preserve the control flow of stable tests. The correctness of the proposed transformation is formally verified in the Prototype Verification System (PVS) [OwreRS92].

The remainder of the paper is organized as follows. sec:fp_err provides technical background on floating-point numbers and round-off errors. The proposed program transformation technique is presented in sec:transformation. sec:polycarp illustrates this technique by transforming the core logic of an algorithm for polygon containment that is part of a geofencing system developed by NASA. sec:related discusses related work and sec:concl concludes the paper.

Boolean expressions are defined by the following grammar.

The expression language considered in this paper contains binary and n-ary conditionals, let expressions, arithmetic expressions, and a warning exceptional statement. Given a set Σ of function symbols, the syntax of program expressions in S is given by the following grammar.

A program is a function declaration of the form ~f(~x1,…,~xm)=S, where ~x1,…,~xm are pairwise distinct variables in ˜V and all free variables appearing in S are in {~x1,…,~xm}. The natural number m is called the arity of ~f. The set of programs is denoted as P.

When if-then-else guards contain floating-point expressions, the output of the considered program is not only directly influenced by rounding errors, but also by the error of taking the incorrect branch in the case of unstable tests.

In other words, a conditional statement (or test) ~ϕ is unstable when there exists an assignments from the free variables ~xi in ~ϕ to F such that ~ϕ evaluates to a different Boolean value with respect to its real valued counterpart R˜B(~ϕ). In these cases, the program is said to follow an unstable path, otherwise, when the flows coincide, it is said to follow a stable path.

This section presents a compositional denotational semantics for the expression language of Formula (1) that models both real and floating-point path conditions and outputs. This semantics is a modification of the one introduced in [MoscatoTDM17] and [TitoloFMM18]

Given ν∈Env, the semantics of program expressions is defined in fig:sem as a function E:S×Env→C that returns the set of conditional tuples representing the possible real and floating-point computations and their corresponding path conditions. The operator ⊔ denotes the least upper bound of the domain of conditional error bounds.

The semantics of the conditional if˜BthenS1elseS2 uses an auxiliary operator ⇓.

Similarly, the semantics of an n-ary conditional is composed of stable and unstable cases. The stable cases are built from the semantics of all the program sub-expressions Si by enriching them with the information stating that the correspondent guard and its real counter-part hold and all the previous guards and their real counterparts do not hold. All the unstable combinations are built by combining the real parts of the semantics of a program expression Si and the floating-point contributions of a different program expression Sj. In addition, the operator ⇓ is used to propagate the information that the real guard of Si and the floating-point guard of Sj hold, while the guards of the previous branches do not hold.

In this section, a program transformation is proposed for detecting when round-off errors affect the evaluation of floating-point conditionals and for ensuring that when the floating-point control flow diverges from the real one a warning is issued. The proposed transformation takes into account round-off errors by abstracting the Boolean expressions in the guards of the original program. This is done by means of two Boolean abstractions β+,β−:˜B→˜B.

The Boolean abstractions β+ and β− can be instantiated as follows for conjunctions and disjunction of sign tests. Properties 1 and 2 are formally proven in PVS to hold for the following definitions of β+ and β−. Let ˜expr∈˜A and ϵ∈F such that |˜expr−R˜A(˜expr)|≤ϵ.

The abstractions performed for sign tests are not correct for generic inequalities of the form a≤b. In this case, to compensate for the round-off errors of both expressions, additional floating-point operations must be performed. Thus, the round-off error generated by such operations needs to be considered as well to obtain a sound approximation. The naive application of this strategy leads to a non-terminating transformation. The design of an effective approximation for these generic inequalities is left as future work.

The program transformation is defined as follows.

The following theorem states the correctness of the program transformation τ. If the transformed program τ(P) returns an output ~r different from warning, then the original program follows a stable path and returns the floating-point output ~r. Furthermore, in the case the original program presents an unstable behavior, the transformed program returns warning.

The program transformation defined in def:prog_trans has been formalized and th:corr_trans has been proven correct in PVS.111This formalization is available at https://shemesh.larc.nasa.gov/fm/PRECiSA.

Consider the program eps_line, which is part of the ACCoRD conflict detection and resolution algorithm [DowekMC05]. This function is used to compute an implicitly coordinated horizontal resolution direction for the aircraft involved in a pair-wise conflict.

can be used to compute the round-off error estimation

ϵ=6.4801497501321145×10−12 for ˜expr. PRECiSA is a tool that over-approximates the round-off error of floating-point programs. It is fully automatic and generates PVS proof certificates that guarantee the correctness of the error estimations with respect to the floating-point IEEE-754 standard. The following program is obtained by using the transformation τ with the Boolean approximations of ex:beta.

PolyCARP222PolyCARP is available at https://github.com/nasa/polycarp. (Algorithms for Computations with Polygons) [NarkawiczH16, NarkawiczMD17] is a suite of algorithms for geo-containment applications. One of the main applications of PolyCARP is to provide geofencing capabilities to unmanned aerial systems (UAS), i.e., detecting whether a UAS is inside or outside a given geographical region, which is modeled using a 2D polygon with a minimum and a maximum altitude. Another application of PolyCARP is the detection of weather cells, modeled as moving polygons, along an aircraft trajectory.

A core piece of logic in PolyCARP is the polygon containment algorithm, i.e., the algorithm that checks whether or not a point lies in the interior of a polygon. Algorithms for polygon containment have to be carefully implemented since numerical errors may lead to wrong answers, even in cases where the point is far from the boundaries of the polygon. PolyCARP uses several techniques to detect if a point is contained in a polygon. One of these techniques relies on the computation of the winding number. This number corresponds to the number of times the polygon winds around p.

Consider two consecutive vertices v and v′ of the polygon in the Cartesian plane with the point p as the origin. The function winding_number_edge checks in which quadrants v and v′ are located and counts how many axes are crossed by the edge (v,v′). If v and v′ belong to the same quadrant, the contribution of the edge to the winding number is 0 since no axis is crossed. If v and v′ lie in adjacent quadrants, the contribution is 1 (respectively -1) if moving from v to v′ along the edge is in counterclockwise (respectively clockwise) direction. In the case v and v′ are in opposite quadrants, the determinant is computed for checking the direction of the edge. If it is counterclockwise the contribution is 2, otherwise it is -2. The winding number is obtained as the sum of the contributions of all the edges of the polygon. If the result is 0 or 4, the point is inside the polygon, otherwise, it is outside.

The function winding_number_edge has been verified in PVS using real arithmetic. However, due to floating-point errors, taking the incorrect branch for one of the edges in the computation of the winding number may result in an incorrect conclusion about the position of the point with respect to the polygon. In order to overcome this problem, the transformation τ of def:prog_trans is applied to the function winding_number_edge resulting in the following function. Given initial bounds for the input variables, PRECiSA [MoscatoTDM17, TitoloFMM18] can be used to compute the round-off error estimations for nx, ny, tx, ty and the determinant, which are denoted ϵtx, ϵty, ϵnx, ϵny, an