In this work we propose a framework for improving the performance of any deep neural network that may suffer from vanishing gradients. To address the vanishing gradient issue, we study a framework, where we insert an intermediate output branch after each layer in the computational graph and use the corresponding prediction loss for feeding the gradient to the early layers. The framework - which we name Elastic network - is tested with several well-known networks on CIFAR10 and CIFAR100 datasets, and the experimental results show that the proposed framework improves the accuracy on both shallow networks (e.g., MobileNet) and deep convolutional neural networks (e.g., DenseNet). We also identify the types of networks where the framework does not improve the performance and discuss the reasons. Finally, as a side product, the computational complexity of the resulting networks can be adjusted in an elastic manner by selecting the output branch according to current computational budget. 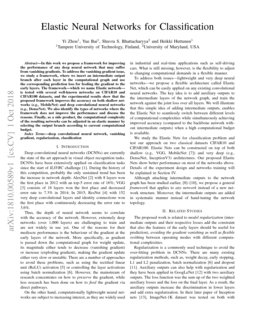 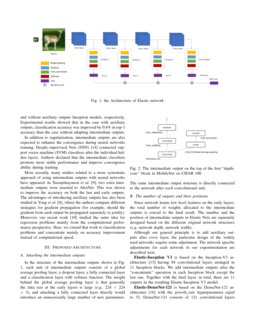 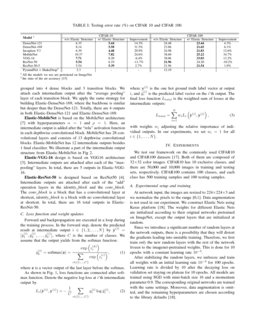 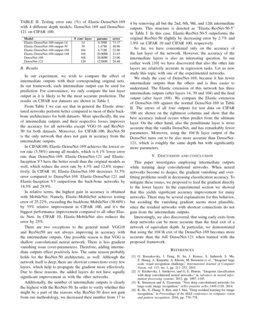 SCAI: A Spectral data Classification framework with Adaptive Inference for the IoT platform

Why should we add early exits to neural networks?

Volume-preserving Neural Networks: A Solution to the Vanishing Gradient Problem

Deep convolutional neural networks (DCNNs) are currently the state of the art approach in visual object recognition tasks. DCNNs have been extensively applied on classification tasks since the start of ILSVRC challenge [1]

. During the history of this competition, probably the only sustained trend has been the increase in network depth: AlexNet

Thus, the depth of neural network seems to correlate with the accuracy of the network. However, extremely deep networks (over 1,000 layers) are challenging to train and are not widely in use yet. One of the reasons for their mediocre performance is the behaviour of the gradient at the early layers of the network. More specifically, as gradient is passed down the computational graph for weight update, its magnitude either tends to decrease (vanishing gradient) or increase (exploding gradient), making the gradient update either very slow or unstable. There are a number of approaches to avoid these problems, such as using the rectified linear unit (ReLU) activation

[6]. However, the mainstream of research concentrates on how to preserve the gradient, while less research has been done on how to feed the gradient via direct pathways.

On the other hand, computationally lightweight neural networks are subject to increasing interest, as they are widely used in industrial and real-time applications such as self-driving cars. What is still missing, however, is the flexibility to adjust to changing computational demands in a flexible manner.

To address both issues—lightweight and very deep neural networks—we propose a flexible architecture called Elastic Net, which can be easily applied on any existing convolutional neural networks. The key idea is to add auxiliary outputs to the intermediate layers of the network graph, and train the network against the joint loss over all layers. We will illustrate that this simple idea of adding intermediate outputs, enables the Elastic Net to seamlessly switch between different levels of computational complexities while simultaneously achieving improved accuracy (compared to the backbone network without intermediate outputs) when a high computational budget is available.

We study the Elastic Nets for classification problem and test our approach on two classical datasets CIFAR10 and CIFAR100. Elastic Nets can be constructed on top of both shallow (e.g., VGG, MobileNet [7]) and very deep (e.g., DenseNet, InceptionV3) architectures. Our proposed Elastic Nets show better performance on most of the networks above. Details of the experiment design and networks training will be explained in Section IV.

The proposed work is related to model regularization (intermediate outputs and their respective losses add the constraint that also the features of the early layers should be useful for prediction), avoiding the gradient vanishing as well as flexible swithing between operating modes with different computational complexities.

Regularization is a commonly used technique to avoid the over-fitting problem in DCNNs. There are many existing regularization methods, such as, weight decay, early stopping, L1 and L2 penalization, batch normalization [6] and dropout [11]. Auxiliary outputs can also help with regularization and they have been applied in GoogLeNet [12]

with two auxiliary outputs. The loss function was the sum up of the two weighted auxiliary losses and the loss on the final layer. As a result, the auxiliary outputs increase the discrimination in lower layers and add extra regularization. In their later paper of Inception nets

In addition to regularization, intermediate outputs are also expected to enhance the convergence during neural networks training. Deeply-supervised Nets (DSN) [14]

More recently, many studies related to a more systematic approach of using intermediate outputs with neural networks have appeared. In Teerapittayanon et al. [9], two extra intermediate outputs were inserted to AlexNet. This was shown to improve the accuracy on both the last and early outputs. The advantages of introducing auxiliary outputs has also been studied in Yong et al. [8], where the authors compare different strategies for gradient propagation (for example, should the gradient from each output be propagated separately or jointly). Moreover, our recent work [10] studied the same idea for regression problems mainly from the computational performance perspective. Here, we extend that work to classification problems and concentrate mainly on accuracy improvement instead of computational speed.

Iii-B The number of outputs and their positions

Since network learns low level features on the early layers, the total number of weights allocated to the intermediate outputs is crucial to the final result. The number and the position of intermediate outputs in Elastic Nets are separately designed based on the different original network structures (e.g. network depth, network width).

Although our general principle is to add auxiliary outputs after every layer, the particular design of the widely used networks require some adjustment. The network specific adjustments for each network in our experimentation are described next.

Elastic-VGG-16 design is based on VGG16 architecture [3]. Intermediate outputs are attached after each of the “maxpooling” layers. In total, there are 5 outputs in Elastic-VGG-16.

Elastic-ResNet-50 is designed based on ResNet50 [4]. Intermediate outputs are attached after each of the “add” operation layers in the identity_block and the conv_block. The conv_block is a block that has a convolutional layer at shortcut, identity_block is a block with no convolutional layer at shortcut. In total, there are 16 total outputs in Elastic-ResNet-50.

Forward and backpropagation are executed in a loop during the training process. In the forward step, denote the predicted result at intermediate output

where z is a vector output of the last layer before the softmax.

As shown in Fig. 1, loss functions are connected after softmax function. Denote the negative log-loss at i’th intermediate output by

where y(i) is the one hot ground truth label vector at output i, and ^y(i)c is the predicted label vector on the i’th output. The final loss function Ltotal is the weighted sum of losses at the intermediate outputs:

with weights wi adjusting the relative importance of individual outputs. In our experiments, we set wi=1 for all i∈{1,…,N}.

3 and we normalize the pixels to the range [0,1]. Data augmentation is not used in our experiment. We construct Elastic Nets using Keras platform

Since we introduce a significant number of random layers at the network outputs, there is a possibility that they will distort the gradients leading into unstable training. Therefore, we first train only

the new random layers with the rest of the network frozen to the imagenet-pretrained weights. This is done for 10 epochs with a constant learning rate

After stabilizing the random layers, we unfreeze and train all weights with an initial learning rate 10−3 for 100 epochs. Learning rate is divided by 10 after the decaying loss on validation set staying on plateau for 10 epochs. All models are trained using SGD with mini-batch size 16 and a momentum parameter 0.9. The corresponding original networks are trained with the same settings. Moreover, data augmentation is omitted, and the remaining hyperparameters are chosen according to the library defaults [18].

From Table I we can see that in general the Elastic structured networks perform better compared to most of their back-bone architectures for both datasets. More specifically, the use of intermediate outputs and their respective losses improves the accuracy for all networks except VGG-16 and ResNet-50 for both datasets. Moreover, for CIFAR-100, ResNet-50 is the only network that does not gain in accuracy from the intermediate outputs.

There are two exceptions to the general trend: VGG16 and ResNet50 are not always improving in accuracy with the intermediate outputs. One possible reason is that VGG is shallow convolutional neural network. There is less gradient vanishing issue (over-parameters). Therefore, adding intermediate outputs effect positively less. The same reason probably holds for the ResNet-50 architecture, as well. Although the network itself is deep, there are shortcut connections every few layers, which help to propagate the gradient more effectively. Due to these reasons, the added layers do not have equally significant improvement as with the other networks.

Additionally, the number of intermediate outputs is clearly the highest with the ResNet-50. In order to verify whether this might be a part of the reasons why ResNet-50 does not gain from our methodology, we decreased their number from 17 to 4 by removing all but the 2nd, 6th, 9th, and 12th intermediate outputs. This structure is denoted as ”Elastic-ResNet-50-5” in Table I. In this case, Elastic-ResNet-50-5 outpeforms the original ResNet-50 slightly by decreasing error by 2.7% and 1.9% on CIFAR 10 and CIFAR 100, respecively.

So far, we have concentrated only on the accuracy of the last layer of the network. However, the accuracy of the intermediate layers is also an interesting question. In our earlier work [10] we have discovered that also the other late layers are relatively accurate in regression tasks. Let us now study this topic with one of the experimented networks.

We study the case of DenseNet-169, because it has fewer intermediate outputs than the others and is thus easier to understand. The Elastic extension of this network has three intermediate outputs (after layers 14, 39 and 104) and the final output (after layer 168). We compare the Elastic extension of DenseNet-169 against the normal DenseNet-169 in Table II. The errors of all four outputs for test data on CIFAR 100 are shown on the rightmost columns and show that the best accuracy indeed occurs when predict from the ultimate layer. On the other hand, also the penultimate layer is more accurate than the vanilla DenseNet, and has remarkably fewer parameters. Moreover, using the 104’th layer output of the DenseNet turns out to be also more accurate than DenseNet-121, which is roughly the same depth but with significantly more parameters.

This paper investigates employing intermediate outputs while training deep convolutional networks. When neural networks become to deeper, the gradient vanishing and over-fitting problems result in decreasing classification accuracy. To mitigate these issues, we proposed to feed the gradient directly to the lower layers. In the experimental section we showed that this yields significant accuracy improvement for many networks. There may be several explanations for this behavior, but avoiding the vanishing gradient seems most plausible, since the residual networks with shortcut connections do not gain from the intermediate outputs.