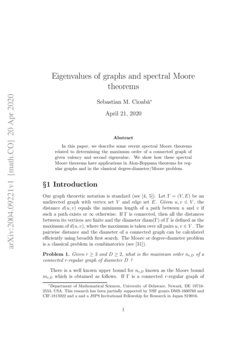 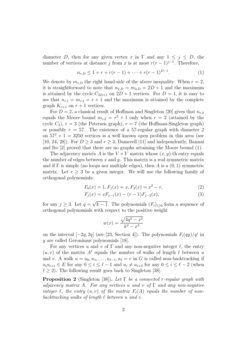 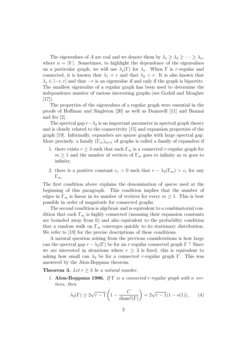 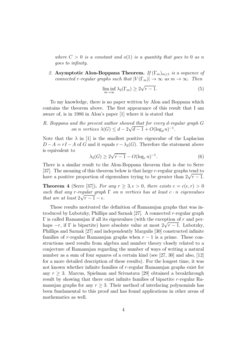 On the spectrum and linear programming bound for hypergraphs

The spectrum of a graph is closely related to many graph parameters. In ...
Sebastian M. Cioabă, et al. ∙

Representation theorems for extended contact algebras based on equivalence relations

The aim of this paper is to give new representation theorems for extende...
Philippe Balbiani, et al. ∙

Ramanujan Graphs and the Spectral Gap of Supercomputing Topologies

We employ the mathematical programming approach in conjunction with the ...
Nima Safaei, et al. ∙

On Near Optimal Spectral Expander Graphs of Fixed Size

We present a pair of heuristic algorithms. The first is to generate a ra...
Clark Alexander, et al. ∙

Our graph theoretic notation is standard (see [4, 5]). Let Γ=(V,E) be an undirected graph with vertex set V and edge set E. Given u,v∈V, the distance d(u,v) equals the minimum length of a path between u and v if such a path exists or ∞ otherwise. If Γ is connected, then all the distances between its vertices are finite and the diameter diam(Γ) of Γ is defined as the maximum of d(u,v), where the maximum is taken over all pairs u,v∈V. The pairwise distance and the diameter of a connected graph can be calculated efficiently using breadth first search. The Moore or degree-diameter problem is a classical problem in combinatorics (see [31]).

Given r≥3 and D≥2, what is the maximum order nr,D of a connected r-regular graph of diameter D ?

There is a well known upper bound for nr,D known as the Moore bound mr,D which is obtained as follows. If Γ is a connected r-regular graph of diameter D, then for any given vertex x in Γ and any 1≤j≤D, the number of vertices at distance j from x is at most r(r−1)j−1. Therefore,

The adjacency matrix A is the V×V matrix whose (x,y)-th entry equals the number of edges between x and y. This matrix is a real symmetric matrix and if Γ is simple (no loops nor multiple edges), then A is a (0,1) symmetric matrix. Let r≥3 be a given integer. We will use the following family of orthogonal polynomials:

for any j≥3. Let q=√k−1. The polynomials (Fi)i≥0 form a sequence of orthogonal polynomials with respect to the positive weight

Let Γ be a connected r-regular graph with adjacency matrix A. For any vertices u and v of Γ and any non-negative integer ℓ, the entry (u,v) of the matrix Fℓ(A) equals the number of non-backtracking walks of length ℓ between u and v.

The eigenvalues of A are real and we denote them by λ1≥λ2≥⋯≥λn, where n=|V|. Sometimes, to highlight the dependence of the eigenvalues on a particular graph, we will use λj(Γ) for λj. When Γ is r-regular and connected, it is known that λ1=r and that λ2<r. It is also known that λj∈[−r,r] and that −r is an eigenvalue if and only if the graph is bipartite. The smallest eigenvalue of a regular graph has been used to determine the independence number of various interesting graphs (see Godsil and Meagher [17]).

The properties of the eigenvalues of a regular graph were essential in the proofs of Hoffman and Singleton [20] as well as Damerell [11] and Bannai and Ito [2].

The spectral gap r−λ2 is an important parameter in spectral graph theory and is closely related to the connectivity [15] and expansion properties of the graph [19]. Informally, expanders are sparse graphs with large spectral gap. More precisely, a family (Γm)m≥1 of graphs is called a family of expanders if

The first condition above explains the denomination of sparse used at the beginning of this paragraph. This condition implies that the number of edges in Γm is linear in its number of vertices for every m≥1. This is best possible in order of magnitude for connected graphs.

Γm converges quickly to its stationary distribution. We refer to [19] for the precise descriptions of these conditions.

A natural question arising from the previous considerations is how large can the spectral gap r−λ2(Γ) be for an r-regular connected graph Γ ? Since we are interested in situations where r≥3 is fixed, this is equivalent to asking how small can λ2 be for a connected r-regular graph Γ. This was answered by the Alon-Boppana theorem.

Let r≥3 be a natural number.

To my knowledge, there is no paper written by Alon and Boppana which contains the theorem above. The first appearance of this result that I am aware of, is in 1986 in Alon’s paper [1] where it is stated that

R. Boppana and the present author showed that for every d-regular graph G on n vertices λ(G)≤d−2√d−1+O(logdn)−1.

Note that the λ in [1] is the smallest positive eigenvalue of the Laplacian D−A=rI−A of G and it equals r−λ2(G). Therefore the statement above is equivalent to

There is a similar result to the Alon-Boppana theorem that is due to Serre [37]. The meaning of this theorem below is that large r-regular graphs tend to have a positive proportion of eigenvalues trying to be greater than 2√r−1.

These results motivated the definition of Ramanujan graphs that was introduced by Lubotzky, Phillips and Sarnak [27]. A connected r-regular graph Γ is called Ramanujan if all its eigenvalues (with the exception of r and perhaps −r, if Γ is bipartite) have absolute value at most 2√r−1. Lubotzky, Phillips and Sarnak [27] and independently Margulis [30] constructed infinite families of r-regular Ramanujan graphs when r−1 is a prime. These constructions used results from algebra and number theory closely related to a conjecture of Ramanujan regarding the number of ways of writing a natural number as a sum of four squares of a certain kind (see [27, 30] and also, [12] for a more detailed description of these results). For the longest time, it was not known whether infinite families of r-regular Ramanujan graphs exist for any r≥3. Marcus, Spielman and Srivastava [29] obtained a breakthrough result by showing that there exist infinite families of bipartite r-regular Ramanujan graphs for any r≥3. Their method of interlacing polynomials has been fundamental to this proof and has found applications in other areas of mathematics as well.

Throughout the years, several proofs of the Alon-Boppana theorem have appeared (see Lubotzky, Phillips and Sarnak [27], Nilli [33], Kahale [25], Friedman [16], Feng and Li [14], Li and Solé [26], Nilli [34] and Mohar [32]). Theorem 4 was proved by Serre [37] with a non-elementary proof (see also [12]). The first elementary proofs appeared around the same time by Cioabă [6] and Nilli [34]. Richey, Stover and Shutty [36] worked to turn Serre’s proof into a quantitative theorem and asked the following natural question.

These authors obtained several results involving v(r,θ). In this section, we describe our recent results related to the problem above and its bipartite and hypergraph versions. See [9, 8, 7] and the references therein for more details and other related problems. The method that is fundamental to all these results is due to Nozaki [35] who proved the linear programming bound for graphs.

Nozaki used this result to study the following problem.

While similar to it, this problem is quite different from Problem 5.

In [8], the authors used Nozaki’s LP bound for graphs to obtain the following general upper bound for v(r,θ).

Given integers r,t≥3 and a non-negative real number c, let T(r,t,c) be the t×t tridiagonal matrix:

If θ equals the second largest eigenvalue λ2(T(r,t,c)) of the matrix T(r,t,c), then

We sketch below the ideas of the proof of this theorem. For j≥0, denote

Let r≥3 be an integer. For any θ∈[−1,2√r−1), there exists an integer t and a positive number c such that θ is the second largest eigenvalue of the matrix M(r,t,c).

with the odd graph

We point out the relevance of these results in the context of Alon-Boppana and Serre theorems. A typical Alon-Boppana result is of the form: if Γ is a connected r-regular graph with diameter D≥2k, then

See Friedman [16, Corollary 3.6] for the inequality above or Nilli [34, Theorem 1] for a slightly weaker bound. The equivalent contrapositive formulation of inequality (11) is the following: if Γ is a connected r-regular graph of diameter D with λ2(Γ)<2√r−1cosπk+1, then D<2k. By Moore bound (1), this implies that

Building on this work, the author with Koolen and Nozaki extended and refined these results to bipartite regular graphs [9]. Let r≥3 be an integer and θ be any real number between 0 and 2√r−1. Define b(r,θ) as the maximum number of vertices of a bipartite r-regular graph whose second largest eigenvalue is at most θ. Clearly, b(r,θ)≤v(r,θ) and a natural question is whether or not these parameters are actually the same or not. One can show that v(3,1)=10 attained by the Petersen graph and that b(3,1)=8 attained by the 3-dimensional cube. For the bipartite graphs, a linear programming bound similar to Nozaki’s Theorem 6 from [35] was obtained with the use of the following polynomials:

If θ is the second largest eigenvalue of B(r,t,c), then

Equality holds if and only if there exists a bipartite distance-regular graph whose quotient matrix with respect to the distance-partition from a vertex is B(r,t,c) for 1≤c<r or B(r,t−1,1) for c=r.

where mr,D is the upper bound from the Moore bound (1). Recall that λ(D) denotes the largest root of GD(x) and satisfies

Inequality (17) will improve the classical Moore bound (1) when GD(β)>0. This will happen when β>λ(D). When D=2, from (10) we know that λ(2)=−1+√4r−32. Note that [13, Theorem 2] contains a typo in the numerator of the right hand-side of the inequality (the 1 in the numerator should be a −1). The informal description of the result above is that when β is large, then the order of the graph will be smaller than the Moore bound. Note however that if β is small, then GD(β) may be negative and inequality (17) may be worse than the classical Moore bound (1). Our results from [8] may be used to handle some cases when β is small (actually when λ2 is small). More precisely, Theorem 8 gives an upper bound for the order of an r-regular graph with small second largest eigenvalue regardless of its diameter actually.

We explain this argument and give some numerical examples in Table 1 where we listed some values of (r,D) (these values are from [31, page 4]) where the maximum orders nr,D of r-regular graphs of diameter D are not known. For each such pair, the column labeled Known gives the largest known order of an r-regular graph of diameter D. The column Defect equals the difference between the Moore bound mr,D and the entry in the Known column. The column Moore contains the value of λ(D) rounded below to 5 decimal points. The column Upper contains the lower bound for τ that guarantees that inequality (17) will give a lower bound than the value from the Known column. For example, for r=8 and D=2, if Γ is an 8-regular graph with diameter 2 having τ<3.40512, then |V(Γ)|<57. The column Lower contains an upper bound for λ2 that guarantees that the order of such r-regular graph would be small. For example, for r=8 and D=2, our Theorem 8 implies that if Γ is an 8-regular graph with λ2<2.0953, then |V(Γ)|<57. Another way to interpret these results in Table 1 is that if one wants to look for a 3-regular graph of diameter 6 with more than 132 vertices, then the second largest eigenvalue of such putative graph has to be between 2.45777 and 2.75001.

This article is based on a talk I gave at the RIMS Conference Research on algebraic combinatorics, related groups and algebras. I thank the participants of the conference and I am grateful to Hiroshi Nozaki for his help with the computations in Table 1 and for his amazing support.