In this paper, the eigenvalue embedding problem of the undamped piezoelectric structure system with no-spillover (EEP-PS) is considered. It aims to update the original system to a new undamped piezoelectric structure system, such that some eigenpairs are replaced by newly given or measured ones, while the remaining eigenpairs are kept unchanged. A set of parametric solutions to the EEP-PS are provided and the performance of the proposed algorithms are illustrated by numerical examples. 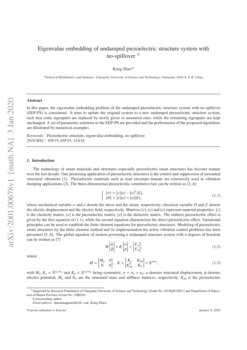 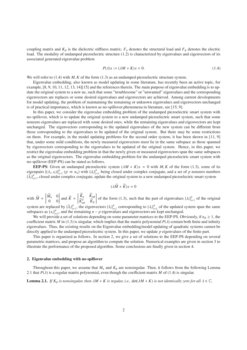 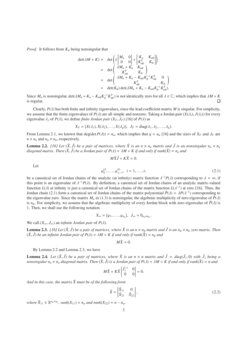 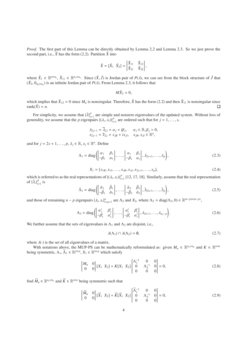 Structure of Trees with Respect to Nodal Vertex Sets

Let T be a tree with a given adjacency eigenvalue λ. In this paper, by u...
Asghar Bahmani, et al. ∙

The hot spots conjecture can be false: Some numerical examples

The hot spots conjecture is only known to be true for special geometries...
Andreas Kleefeld, et al. ∙

where mechanical variable σ and ϵ denote the stress and the strain, respectively; electrical variable D and E denote the electric displacement and the electric field, respectively. Matrices [c],[e] and [ε] represent material properties: [c] is the elasticity matrix, [e] is the piezoelectric matrix, [ε] is the dielectric matrix. The indirect piezoelectric effect is given by the first equation of (1.1), while the second equation characterizes the direct piezoelectric effect. Variational principles can be used to establish the finite element equations for piezoelectric structures. Modeling of piezoelectric smart structures by the finite element method and its implementation for active vibration control problems has been presented Meng-Ps-2006 ; Naraya-2003 . The global equation of motion governing a undamped structure system with ndegrees of freedom can be written as Tzou-Ps-1990

We will refer to (1.4) with M,K of the form (1.3) as an undamped piezoelectric structure system.

Eigenvalue embedding, also known as model updating in some literature, has recently been an active topic, for example, Qiang-2017 ; Chu-2007 ; Chu-2008 ; Chu-2009 ; Kang-2018-apm ; Lancaster-2008 ; Friswell-1998 Carvalho-2006 and the references therein. The main purpose of eigenvalue embedding is to update the original system to a new ne, such that some ”troublesome” or ”unwanted” eigenvalues and the corresponding eigenvectors are replaces or some desired eigenvalues and eigenvectors are achieved. Among current developments for model updating, the problem of maintaining the remaining or unknown eigenvalues and eigenvectors unchanged is of practical importance, which is known as no-spillover phenomena in literature, see Carvalho-2006 ; Chu-2007 .

We will provide a set of solutions depending on some parameter matrices to the EEP-PS. Obviously, if nϕ≥1, the coefficient matrix M in (1.3) is singular, which implies that the matrix polynomial P(λ) contain both finite and infinity eigenvalues. Thus, the existing results on the Eigenvalue embedding/model updating of quadratic systems cannot be directly applied to the undamped piezoelectric system. In this paper, we update p eigenvalues of the finite part.

This paper is organized as follows. In section 2, we give a set of solutions to the EEP-PS depending on several parametric matrices, and propose an algorithm to compute the solution. Numerical examples are given in section 3 to illustrate the performance of the proposed algorithm. Some conclusions are finally given in section 4.

Throughout this paper, we assume that Mu and Kϕ are nonsingular. Then, it follows from the following Lemma 2.1 that P(λ) is a regular matrix polynomial, even though the coefficient matrix M of (1.4) is singular.

It follows from Kϕ being nonsingular that

Since Mu is nonsingular, det(λMu+Ku−KuϕK−1ϕKTuϕ) is not identically zero for all λ∈C, which implies that λM+K is regular. ∎

Clearly, P(λ) has both finite and infinity eigenvalues, since the lead coefficient matrix M is singular. For simplicity, we assume that the finite eigenvalues of P(λ) are all simple and nonzero. Taking a Jordan pair (X(λi),J(λi)) for every eigenvalue λj of P(λ), we define finite Jordan pair (XF,JF) Lancaster-book of P(λ) as

And in this case, the matrix ^X must be of the following form

We further assume that the sets of eigenvalues in Λ1 and Λ2 are disjoint, i.e.,

where λ(⋅) is the set of all eigenvalues of a matrix.

holds for some ˜X1=X1Θ, where Θ∈Rp×p is nonsingular. Note that Λ2∈R(n−p)×(n−p) and X2∈Rn×(n−p) are remaining eigenvalues and eigenvectors of the original undamped piezoelectric system to be kept unchanged after the updating and they are generally unknown in applications. So it is necessary to characterize the solution to the EEP-PS without the information of Λ2 and X2.

To give the parametric solutions to the EEP-PS, we will need a spectral decomposition of the undamped piezoelectric smart system of (1.4) which is motivated by Qiang-2017 ; Chu-2009-spectral . We give the sufficient and necessary conditions for the matrices M and K in (1.3) such that (1.4) is satisfied and express M and K in terms of eigenvalues and eigenvectors of (1.4). The following theorem then gives the spectral decomposition of the undamped piezoelectric system (1.4), characterizing the structure of the Jordan pair (X,J) and the relationship between the coefficient matrices M, K in (1.3) and (X,J).

Then there exist nonsingular symmetry matrices Mu and K such that

If such matrices Γ and Φ exist, then the coefficient matrices Mu and K can be expressed as

We define Γ=XTuMuXu. Let Φ∈Rnϕ×nϕ be a nonsingular and symmetric matrix. Since X and Mu are nonsingular, it is easy to see that

and in this case, we have

Since K11 is symmetric, we must have

(Sufficiency) Conversely, if there exist two symmetric matrices Γ and Φ satisfying (2.12), where Φ is nonsingular, then

is also nonsingular, which means that XuTXTu is nonsingular and symmetric. Thus Mu is well defined by (2.13a). From (2.22), it follows that

i.e., MX+KXJ=0 since X is nonsingular. This completes the proof of the theorem. ∎

where X1u∈Rnu×p. Clearly, ([X1,X2],diag(Λ1,Λ2)) is a Jordan pair of P(λ).The following theorem is our main result which gives the parametric solutions to the EEP-PS.

By (2.30) and Theorem 2.5, we first give the expressions of the coefficient matrices Mu and QTKQ by the eigenvalue matrix Λ1, Λ3 and the eigenvectors matrix

where Φ∈Rnϕ×nϕ is a nonsingular and symmetric matrix. Then

where ˆK22=[−Λ3Γ−1200K′22], K′22 is an arbitrary nonsingular nϕ×nϕ symmetry matrix, which implies that the coefficient matrices of original undamped system can be expressed as