Human identification remains to be one of the challenging tasks in computer vision community due to drastic changes in visual features across different viewpoints, lighting conditions, occlusion, etc. Most of the literature has been focused on exploring human re-identification across viewpoints that are not too drastically different in nature. Cameras usually capture oblique or side views of humans, leaving room for a lot of geometric and visual reasoning. Given the recent popularity of egocentric and top-view vision, re-identification across these two drastically different views can now be explored. Having an egocentric and a top view video, our goal is to identify the cameraman in the content of the top-view video, and also re-identify the people visible in the egocentric video, by matching them to the identities present in the top-view video. We propose a CRF-based method to address the two problems. Our experimental results demonstrates the efficiency of the proposed approach over a variety of video recorded from two views. 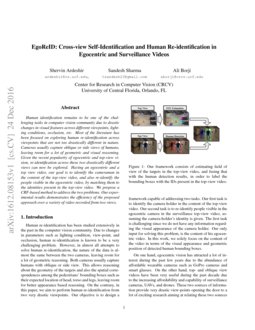 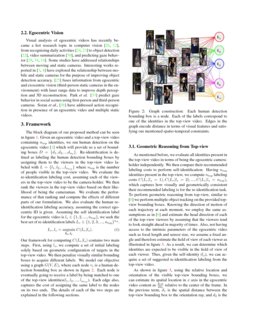 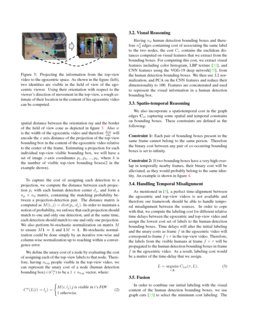 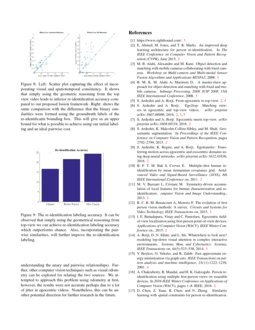 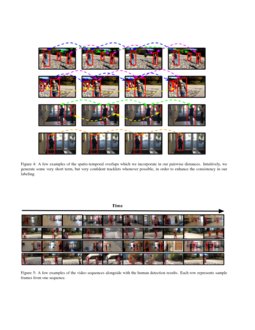 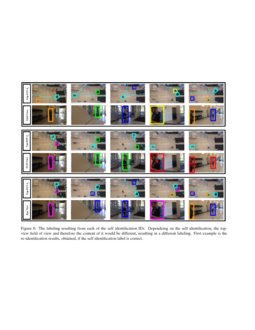 Human re-identification has been studied extensively in the past in the computer vision community. Due to changes in parameters such as lighting condition, view-point, and occlusion, human re-identification is known to be a very challenging problem. However, in almost all attempts to solve human re-identification, the nature of the data is almost the same between the two cameras, leaving room for a lot of geometric reasoning. Both cameras usually capture humans with oblique or side view. This allows reasoning about the geometry of the targets and also the spatial correspondences among the pedestrians’ bounding boxes such as their expected location of head, torso and legs, leaving room for better appearance based reasoning. On the contrary, in this paper, we aim to perform human re-identification from two very drastic viewpoints. Our objective is to design a framework capable of addressing two tasks. Our first task is to identify the camera holder in the content of the top-view video. Our second task is to re-identify people visible in the egocentric camera in the surveillance top-view video, assuming the camera-holder’s identity is given. The first task is challenging since we do not have any information regarding the visual appearance of the camera holder. Our only input for solving this problem, is the content of his egocentric video. In this work, we solely focus on the content of the video in terms of the visual appearance and geometric position of detected human bounding boxes.

On one hand, egocentric vision has attracted a lot of interest during the past few years due to the abundance of affordable wearable cameras such as GoPro cameras and smart glasses. On the other hand, top- and oblique view videos have been very useful during the past decade due to the increasing affordability and capability of surveillance cameras, UAVs, and drones. These two sources of information provide very drastic view-points opening the door to a lot of exciting research aiming at relating these two sources of knowledge.

To the best of our knowledge, the only previous work tackling the self-identification of egocentric viewers in top-view videos is [6]. This approach requires a set of egocentric videos and heavily relies on pairwise relationships among egocentric cameras to reason about the assignment. Having only one egocentric video, the problem would be very difficult. In our experiments, we compare our results to [6] as a baseline. In addition, [6] does not address our second task, which is re-identifying people visible in the egocentric video.

The rest of this paper is organized as follows. We selectively review the related work in Section 2. Our framework is described in Section 3. Experiments and results are explained in Section 4. Finally, Section 5 concludes the paper.

In this section, we review related works in the areas of human re-identification and egocentric vision.

Person re-identification has been studied heavily during the past few years in the computer vision community [19, 10, 11]. The objective here is to find and identify people across multiple cameras. In other words, who is each person present in one static camera, in another overlapping or non-overlapping static camera? The main cue in human re-identification is visual appearance of humans, which is absent in egocentric videos.

Tasks such as human identification and localization in egocentric cameras have been studied in the past. [20] uses the head motion of an egocentric viewer as a biometric signature to determine which videos have been captured by the same person. In [40], authors identify egocentric observers in other egocentric videos using their head motion. The work of [13] localizes the field of view of an egocentric camera by matching it against a reference dataset of videos or images, such as Google street view images. Landmarks and map symbols have been used in [27] to perform self localization on a map. The study reported in [16] addresses the problem of person re-identification in a surveillance network of wearable devices, and [41] performs re-identification on time-synchronized wearable cameras. The relationship between egocentric and top-view information has been explored in tasks such as human identification [6, 5], semantic segmentation[8] and temporal correspondence[7]. [9] also seeks an automated method for learning a transformation between motion features across egocentric and non-egocentric domains.

uses a region descriptor based on hierarchical Gaussian distribution of pixel features for person re-identification.

Our framework for computing C(Lr|ls) contains two main steps. First, using ls, we compute a set of initial labeling solely based on geometric configuration of targets in the top-view video. We then penalize visually similar bounding boxes to acquire different labels. We model our objective using a graph G(V,E), where each node vi is a human detection bounding box as shown in figure 2. Each node is eventually going to receive a label by being matched to one of the top-view identities(l1,l2,...,lntop). Each edge also, captures the cost of assigning the same label to the nodes on its two ends. The details of each of the two steps are explained in the following sections.

As mentioned before, we evaluate all identities present in the top-view video in terms of being the egocentric camera-holder independently. We then compare their recommended labeling costs to perform self-identification. Having ntop identities present in the top-view, we compute ntop labeling costs C(Lr|ls=1),C(Lr|ls=2),...,C(Lr|ls=ntop), which captures how visually and geometrically consistent their recommended labeling is for the re-identification task. To perform geometric reasoning from top-view, similar to [6]

we perform multiple object tracking on the provided top-view bounding boxes. Knowing the direction of motion of each trajectory at each moment, we employ the same assumptions as in

[6] and estimate the head direction of each of the top-view viewers by assuming that the viewers tend to look straight ahead in majority of times. Also, not having access to the intrinsic parameters of the egocentric video such as focal length and sensor size, we assume a fixed angle and therefore estimate the field of view of each viewer as illustrated in figure 3. As a result, we can determine which identities are expected to be visible in the field of view of each viewer. Thus, given the self-identity (ls), we can acquire a set of suggested re-identification labeling from the top-view video.

To capture the cost of assigning each detection to a projection, we compute the distance between each projection pi with each human detection center dj, and form a np×nd

matrix, containing the matching probability between a projection-detection pair. The distance matrix is computed as

M(i,j)=dist(pi,dj). In order to maintain a notion of probability, we enforce that each projection should match to one and only one detection, and at the same time, each detection should match to one and only one projection. We also perform bi-stochastic normalization on matrix M to ensure M1≈1 and 1M≈1. Bi-stochastic normalization could be done simply by an iterative row-wise and column-wise normalization up to reaching within a convergence error.

We also incorporate a spatiotemporal cost in the graph edges Cst capturing some spatial and temporal constrains on bounding boxes. These constraints are defined as the following:

Constraint 1: Each pair of bounding boxes present in the same frame cannot belong to the same person. Therefore the binary cost between any pair of co-occurring bounding boxes is set to infinity.

Constraint 2: If two bounding boxes have a very high overlap in temporally nearby frames, their binary cost will be alleviated, as they would probably belong to the same identity. An example is shown in figure 4.

As mentioned in [5], a perfect time-alignment between the egocentric and top-view videos is not available and therefore our framework should be able to handle temporal misalignment between the sources. In order to cope with that, we compute the labeling cost for different relative time delays between the egocentric and top-view video and assign the lowest cost set of labels to the human-detection bounding boxes. Time delays will alter the initial labeling and the unary costs as frame f in the egocentric video will correspond to frame f+τ in the top-view video. Therefore, the labels from the visible humans at frame f+τ will be propagated to the human detection bounding boxes in frame f in the egocentric video. As a result, labeling cost would be a matter of the time-delay that we assign.

In order to combine our initial labeling with the visual content of the human detection bounding boxes, we use graph cuts [15] to select the minimum cost labeling. The unary geometry based term (Cg) comes from the top-view suggested initial labeling, and the second and third term includes the binary costs for assigning different bounding boxes to different labels.

Intuitively, we initialize a labeling with different time-delays using the geometric reasoning, and then enforce visual and spatiotemporal consistency among the similarly labeled nodes by incorporating the binary costs. Our experiments show that the fusion will further improve the re-identification accuracy. At the end, we pick the configuration with the lowest labeling cost as in equation 3.

We use the first 10 sequences of the dataset used in [6]. The dataset contains test cases of videos shot in different indoor and outdoor environments. Each test case contains one top-view video and several egocentric videos captured by the people visible in the top-view camera. We annotated the labels for the human detection bounding boxed for each video and evaluated the accuracy for re-identification and self-identification. The first 10 sets contain 37 egocentric videos and 10 top-view videos. Number of people visible in the top-view cameras varies from 3 to 10, and lengths of the videos vary from 1019 frames (33.9 seconds) up to 3132 frames (110 seconds).

For future, a more general case of this problem can be explored such as assigning multiple egocentric viewers to viewers in multiple top-view cameras. Also, other approaches can be explored for solving the introduced problem or slight variations of it (e.g., supervised methods for understanding the unary and pairwise relationships). Further, other computer vision techniques such as visual odometry can be explored for relating the two sources. We attempted to approach this problem using odometry at first, however, the results were not accurate perhaps due to a lot of jitter in egocentric videos. Nonetheless, this can be another potential direction for further research in the future.