We study the enumeration of answers to ontology-mediated queries (OMQs) where the ontology is a set of guarded TGDs or formulated in the description logic ELI and the query is a conjunctive query (CQ). In addition to the traditional notion of an answer, we propose and study two novel notions of partial answers that can take into account nulls generated by existential quantifiers in the ontology. Our main result is that enumeration of the traditional complete answers and of both kinds of partial answers is possible with linear-time preprocessing and constant delay for OMQs that are both acyclic and free-connex acyclic. We also provide partially matching lower bounds. Similar results are obtained for the related problems of testing a single answer in linear time and of testing multiple answers in constant time after linear time preprocessing. In both cases, the border between tractability and intractability is characterized by similar, but slightly different acyclicity properties. 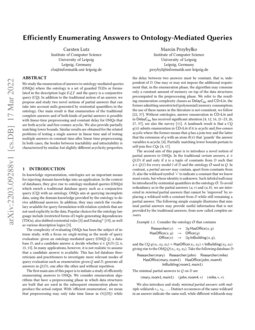 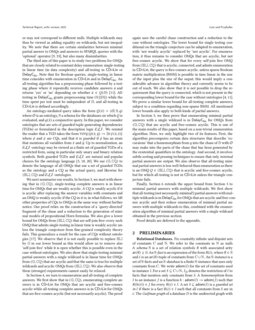 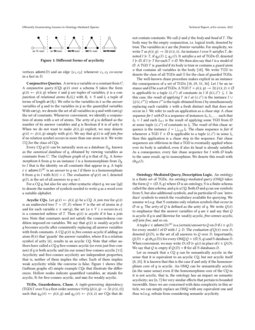 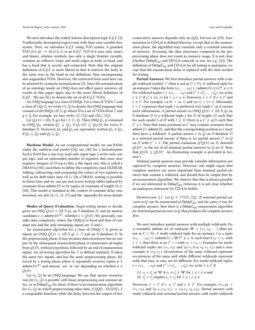 Enumeration on Trees under Relabelings

We provide an ultimately fine-grained analysis of the data complexity an...
Carsten Lutz, et al. ∙

We study the complexity of enumerating the answers of Conjunctive Querie...
Nofar Carmeli, et al. ∙

How to Approximate Ontology-Mediated Queries

In knowledge representation, ontologies are an important means for injecting domain knowledge into an application. In the context of databases, they give rise to ontology/̄mediated queries (OMQs) which enrich a traditional database query such as a conjunctive query (CQ) with an ontology. OMQs aim at querying incomplete data, using the domain knowledge provided by the ontology to derive additional answers. In addition, they may enrich the vocabulary available for query formulation with relation symbols that are not used explicitly in the data. Popular choices for the ontology language include (restricted forms of) tuple-generating dependencies (TDGs), also dubbed existential rules (DBLP:conf/ijcai/BagetMRT11) and Datalog± (DBLP:journals/ws/CaliGL12), as well as various description logics (baader-introduction-to-dl).

The complexity of evaluating OMQs has been the subject of intense study, with a focus on single-testing as the mode of query evaluation: given an ontology-mediated query (OMQ) Q, a database D, and a candidate answer ¯a, decide whether ¯a∈Q(D) (AbHV95; barcelo_omq_limits-g; bienvenu-answering-omq; bienvenu-ontology-disjunctive-datalog). In many applications, however, it is not realistic to assume that a candidate answer is available. This has led database theoreticians and practitioners to investigate more relevant modes of query evaluation such as enumeration: given Q and D, generate all answers in Q(D), one after the other and without repetition.

The first main aim of this paper is to initiate a study of efficiently enumerating answers to OMQs. We consider enumeration algorithms that have a preprocessing phase in which data structures are built that are used in the subsequent enumeration phase to produce the actual output. With ‘efficient enumeration’, we mean that preprocessing may only take time linear in O(||D||) while the delay between two answers must be constant, that is, independent of D. One may or may not impose the additional requirement that, in the enumeration phase, the algorithm may consume only a constant amount of memory on top of the data structures precomputed in the preprocessing phase. We refer to the resulting enumeration complexity classes as \mnDelayC\mnlin and CD∘Lin, the former admitting unrestricted (polynomial) memory consumption; the use of these names in the literature is not consistent, we follow (segoufin-enum; carmeli-enum-ucqs). Without ontologies, answer enumeration in CD∘Lin and in \mnDelayC\mnlin has received significant attention (DBLP:journals/dagstuhl-reports/BorosKPS19; bagan-enum-cdlin; berkholz-enum-fpt; carmeli-enum-ucqs; carmeli-enum-rand; carmeli-enum-func; segoufin-enum; deep-enum-alg; deep-enum-ranked), see also the survey (berkholz-enum-tutorial). A landmark result is that a CQ q(¯x) admits enumeration in CD∘Lin if it is acyclic and free-connex acyclic where the former means that q has a join tree and the latter that the extension of q with an atom R(¯x) that ‘guards’ the answer variables is acyclic (bagan-enum-cdlin). Partially matching lower bounds pertain to self-join free CQs (bagan-enum-cdlin; BraultBaron).

The second aim of this paper is to introduce a novel notion of partial answers to OMQs. In the traditional certain answers, ¯a∈Q(D) if and only if ¯a is a tuple of constants from D such that ¯a∈Q(I) for every model I of D and the ontology used in Q. In contrast, a partial answer may contain, apart from constants from D, also the wildcard symbol ‘∗’ to indicate a constant that we know must exists, but whose identity is unknown. Such labeled nulls may be introduced by existential quantifiers in the ontology . To avoid redundancy as in the partial answers (a,∗) and (a,b), we are interested in minimal partial answers that cannot be ‘improved’ by replacing a wildcard with a constant from D while still remaining a partial answer. The following simple example illustrates that minimal partial answers may provide useful information that is not provided by the traditional answers, from now called complete answers.

Consider the ontology that contains

The minimal partial answers to Q on D are

We also introduce and study minimal partial answers with multiple wildcards ∗1,∗2,…. Distinct occurences of the same wildcard in an answer indicate the same null, while different wildcards may or may not correspond to different nulls. Multiple wildcards may thus be viewed as adding equality on wildcards, but not inequality. We note that there are certain similarities between minimal partial answer to OMQs and answers to SPARQL queries with the ‘optional’ operator (DBLP:conf/pods/BarceloPS15; DBLP:conf/icdt/KrollPS16), but also many dissimilarities.

An ontology-mediated query takes the form Q(¯x)=(\Omc,\Sbf,q) where is an ontology, a schema for the databases on which Q is evaluated, and q(¯x) a conjunctive query. In this paper, we consider ontologies that are sets of guarded tuple-generating dependencies (TGDs) or formulated in the description logic ELI. We remind the reader that a TGD takes the form ∀¯x∀¯y(ϕ(¯x,¯y)→∃¯zψ(¯x,¯z)) where ϕ and ψ are CQs, and that it is guarded if ϕ has an atom that mentions all variables from ¯x and ¯y. Up to normalization, an ELI-ontology may be viewed as a finite set of guarded TGDs of a restricted form, using in particular only unary and binary relation symbols. Both guarded TGDs and \ELI are natural and popular choices for the ontology language (cali-more-expressove-onto; cali-taming-chase; baader-introduction-to-dl). We use (,) to denote the language of all OMQs that use a set of guarded TGDs as the ontology and a CQ as the actual query, and likewise for (,) and ELI-ontologies.

We next summarize our results. In Section LABEL:sect:singletesting, we start with showing that in (,), single-testing complete answers is in linear time for OMQs that are weakly acyclic. A CQ is weakly acyclic if it is acyclic after replacing the answer variables with constants and an OMQ is weakly acyclic if the CQ in it is; in what follows, we lift other properties of CQs to OMQs in the same way without further notice. Our proof relies on the construction of a ‘query-directed’ fragment of the chase and a reduction to the generation of minimal models of propositional Horn formulas. We also give a lower bound for OMQs from (,) that are self-join free: every such OMQ that admits single-testing in linear time is weakly acyclic unless the triangle conjecture from fine-grained complexity theory fails. This generalizes a result for the case of CQs without ontologies (BraultBaron). We observe that it is not easily possible to replace by in our lower bound as this would allow us to remove also ‘self-join free’ while it is open whether this is possible even in the case without ontologies. We also show that single-testing minimal partial answers with a single wildcard is in linear time for OMQs from (,) that are acyclic and that the same is true for multiple wildcards and acyclic OMQs from (,). We also observe that these (stronger) requirements cannot easily be relaxed.

In Section LABEL:sect:enumallcomplete, we turn to enumeration and all-testing of complete answers. We first show that in (,), enumerating complete answers is in CD∘Lin for OMQs that are acyclic and free/̄connex acyclic while all-testing complete answers is in CD∘Lin for OMQs that are free/̄connex acyclic (but not necessarily acyclic). The proof again uses the careful chase construction and a reduction to the case without ontologies. The lower bound for single testing conditional on the triangle conjecture can be adapted to enumeration, with ‘not weakly acyclic’ replaced by ‘not acyclic’. For enumeration, it thus remains to consider OMQs that are acyclic, but not free-connex acyclic. We show that for every self-join free OMQ from (,) that is acyclic, connected, and admits enumeration in CD∘Lin, the query is free-connex acyclic, unless sparse Boolean matrix multiplication (BMM) is possible in time linear in the size of the input plus the size of the ouput; this would imply a considerable advance in algorithm theory and currently seems to be out of reach. We also show that it is not possible to drop the requirement that the query is connected, which is not present in the corresponding lower bound for the case without ontologies (bagan-enum-cdlin; berkholz-enum-tutorial). We prove a similar lower bound for all-testing complete answers, subject to a condition regarding non-sparse BMM. All mentioned lower bounds also apply to both kinds of partial answers.

In Section LABEL:sect:LPAsingleWildcardUpper, we then prove that enumerating minimal partial answers with a single wildcard is in \mnDelayC\mnlin for OMQs from (,) that are acyclic and free/̄connex acyclic. This is one of the main results of this paper, based on a non-trivial enumeration algorithm. Here, we only highlight two of its features. First, the algorithm precomputes certain data structures that describe ‘excursions’ that a homomorphism from q into the chase of D with \Omc may make into the parts of the chase that has been generated by the existential quantifiers in the ontology. And second, it involves subtle sorting and pruning techniques to ensure that only minimal partial answers are output. We also observe that all-testing minimal partial answers is less well-behaved than enumeration as there is an OMQ Q∈(,) that is acyclic and free/̄connex acyclic, but for which all-testing is not in CD∘Lin unless the triangle conjecture fails.