When building state-of-the-art speech translation models, the need for large computational resources is a significant obstacle due to the large training data size and complex models. The availability of pre-trained models is a promising opportunity to build strong speech translation systems efficiently. In a first step, we investigate efficient strategies to build cascaded and end-to-end speech translation systems based on pre-trained models. Using this strategy, we can train and apply the models on a single GPU. While the end-to-end models show superior translation performance to cascaded ones, the application of this technology has a limitation on the need for additional end-to-end training data. In a second step, we proposed an additional similarity loss to encourage the model to generate similar hidden representations for speech and transcript. Using this technique, we can increase the data efficiency and improve the translation quality by 6 BLEU points in scenarios with limited end-to-end training data. 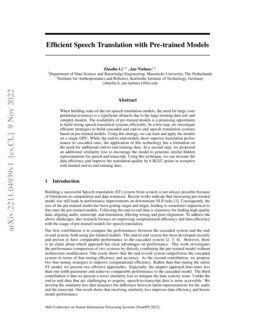 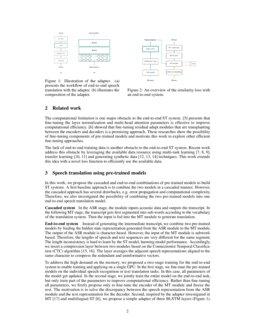 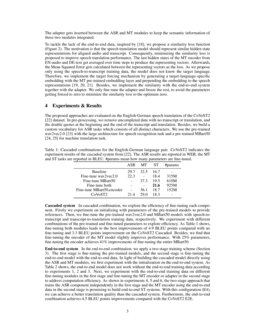 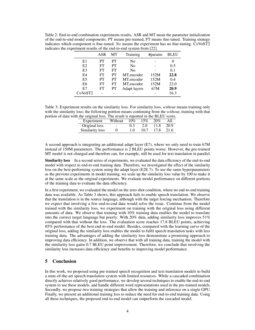 A Comparative Study on End-to-end Speech to Text Translation

Consistent Transcription and Translation of Speech

Building a successful Speech translation (ST) system from scratch is not always possible because of limitations in computation and data resources. Recent works indicate that increasing pre-trained model size still leads to performance improvements on downstream NLP tasks Sanh et al. (2020). Consequently, the size of the pre-trained model has been getting larger and larger, leading to sometimes impractical to fine-tune the pre-trained models. Collecting the end-to-end data is expensive for finding high-quality data, aligning audio, transcript, and translation, filtering wrong and poor alignment. To address the above challenges, this research focuses on improving computational efficiency and data efficiency with the usage of pre-trained models for speech translation.

Our first contribution is to compare the performances between the cascaded system and the end-to-end system, both using pre-trained models. The end-to-end system has been developed recently and proven to have comparable performance to the cascaded system Niehues et al. (2018); Ansari et al. (2020); Bentivogli et al. (2021). However, there is no claim about which approach has clear advantages on performance. This work investigates the performance comparison of two systems by directly combining the pre-trained model without architecture modification. Our result shows that the end-to-end system outperforms the cascaded system in terms of fine-tuning efficiency and accuracy. As the second contribution, we propose two fine-tuning strategies to improve computational efficiency. Rather than fine-tuning the entire ST model, we present two effective approaches. Especially, the adapter approach fine-tunes less than one-tenth parameter and achieves comparable performance to the cascaded model. The third contribution is that we present a novel similarity loss to mitigate the data scarcity issue. Unlike the end-to-end data that are challenging to acquire, speech-to-transcript data is more accessible. We develop the similarity loss that measures the difference between latent representations for the audio and the transcript. Our result shows that involving similarity loss improves data efficiency and boosts model performance.

techniques. This work extends this idea with a novel loss function to efficiently use the available data.

In this work, we propose the cascaded and end-to-end combinations of pre-trained models to build ST systems. A first baseline approach is to combine the two models in a cascaded manner. However, the cascaded approach has several drawbacks, e.g. error propagation and computational complexity. Therefore, we also investigated the possibility of combining the two pre-trained models into one end-to-end speech translation model.

Cascaded system   In the ASR stage, the module inputs acoustic data and outputs the transcript. In the following MT stage, the transcript gets first segmented into sub-words according to the vocabulary of the translation system. Then the input is fed into the MT module to generate translation.

End-to-end system    Instead of generating the intermediate transcript, we combine two pre-trained models by feeding the hidden state representation generated from the ASR module to the MT module. The output of the ASR module is character-based. However, the input of the MT module is subword-based. Therefore, the lengths of speech and text sequences are very different for the same segment. The length inconsistency is hard to learn by the ST model, harming model performance. Accordingly, we insert a compression layer between two modules based on the Connectionist Temporal Classification (CTC) algorithm Graves et al. (2006); Gaido et al. (2021)

. The layer averages the adjacent speech representations aligned to the same character to compress the redundant and uninformative vectors.

To address the high demand on the memory, we proposed a two-stage training for the end-to-end system to enable training and applying on a single GPU: In the first stage, we fine-tune the pre-trained models on the individual speech recognition or text translation tasks. In this case, all parameters of the model get updated. In the second stage, we jointly train the entire model on the end-to-end task, but only train part of the parameters to improve computational efficiency. Rather than fine-tuning all parameters, we firstly propose only to fine-tune the encoder of the MT module and freeze the rest. The motivation is to solve the discrepancy between the speech representation from the ASR module and the text representation for the decoder. Second, inspired by the adapter investigated in MT Bapna et al. (2019) and multilingual ST Le et al. (2021), we propose a simple adapter of three BLSTM layers (Figure 2). The adapter gets inserted between the ASR and MT modules to keep the semantic information of these two modules integrated.

To tackle the lack of the end-to-end data, inspired by Pham et al. (2019), we propose a similarity loss function (Figure 2). The motivation is that the speech translation model should represent similar hidden state representations for aligned audio and transcript. Consequently, minimizing the similarity loss is proposed to improve speech translation performance. The last hidden states of the MT encoder from EN-audio and DE-text get averaged over time steps to produce the representing vectors. Afterwards, the Mean Squared Error gets calculated between the representing vectors as the loss. As we propose only using the speech-to-transcript training data, the model does not know the target language. Therefore, we implement the target forcing mechanism by generating a target-language-specific embedding with the MT pre-trained embedding layer and prepending the embedding to the speech representations Ha et al. (2016); Johnson et al. (2017); Gangi et al. (2019). Besides, we implement the similarity with the end-to-end system together with the adapter. We only fine-tune the adapter and freeze the rest, to avoid the parameters getting forced to zero to minimize the similarity loss to the optimum zero.

The proposed approaches are evaluated on the English-German speech translation of the CoVoST2 Wang et al. (2020) dataset. In pre-processing, we remove uncompleted data with no transcript or translation, and the double quotes at the beginning and the end of the transcript and translation. Besides, we build a custom vocabulary for ASR tasks which consists of all distinct characters. We use the pre-trained wav2vec2.0 Baevski et al. (2020) with the large architecture for speech recognition task and a pre-trained MBart50 Liu et al. (2020); Tang et al. (2020) for machine translation task.

A second approach is integrating an additional adapt layer (E7), where we only need to train 67M instead of 150M parameters. The performance is 2 BLEU points worse. However, the pre-trained MT model is not changed and therefore can, for example, still be used for text translation in parallel.

In a second series of experiments, we evaluated the data efficiency of the end-to-end model with respect to end-to-end training data. Therefore, we investigated the effect of the similarity loss on the best-performing system using the adapt layer (E2E 7). To use the same hyperparameters as the previous experiments in model training, we scale up the similarity loss value by 100 to make it at the same scale as the original experiments. We evaluate model performance on different portions of the training data to evaluate the data efficiency.

In this work, we proposed using pre-trained speech recognition and text translation models to build a state-of-the-art speech translation system with limited resources. While a cascaded combination directly achieves relatively good performance, we develop several techniques to enable the end-to-end system to use these models, and handle different word representations used in the pre-trained models. Secondly, we propose two training strategies that allow the training and inference on a single GPU. Finally, we present an additional training loss to reduce the need for end-to-end training data. Using all these techniques, the proposed end-to-end model can outperform the cascaded model.