Mobile networks are intriguing in recent years due to their practical implications. Previous routing strategies for improving transport efficiency have little attention what order should the packets be forwarded, just simply used first-in-first-out queue discipline. Here we apply priority queueing discipline to shortest distance routing strategy on mobile networks. Numerical experiments show it not only remarkably improves network throughput and the packet arriving rate, but also reduces average end-to-end delay and the rate of queueing delay. Our work may be helpful in routing strategy designing on mobile networks. 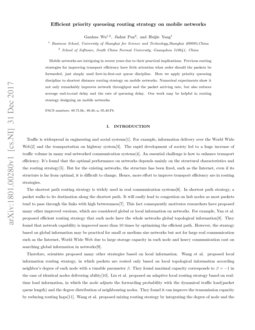 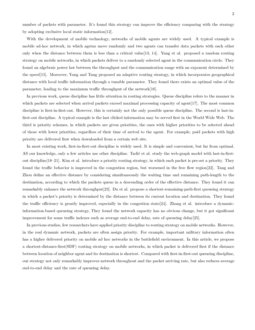 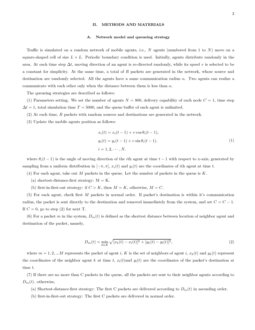 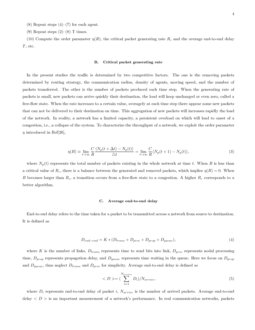 Effective usage of random routing on networks of mobile agents

This paper deals with the concept of a 'Physical Internet', the idea of ...
Jean-Yves Colin, et al. ∙

Traffic is widespread in engineering and social systemsChenSurvey . For example, information delivery over the World Wide WebSatorrasPRL and the transportation on highway systemMilton . The rapid development of society led to a huge increase of traffic volume in many real networked communication systemsOhira . An essential challenge is how to enhance transport efficiency. It’s found that the optimal performance on networks depends mainly on the structural characteristics and the routing strategyBoguna . But for the existing networks, the structure has been fixed, such as the Internet, even if its structure is far from optimal, it is difficult to change. Hence, more effort to improve transport efficiency are in routing strategies.

The shortest path routing strategy is widely used in real communication systemsSP . In shortest path strategy, a packet walks to its destination along the shortest path. It will easily lead to congestion on hub nodes as most packets tend to pass through the links with high betweennessDanila . This fact consequently motivates researchers have proposed many other improved versions, which are considered global or local information on networks. For example, Yan et al. proposed efficient routing strategy that each node have the whole network s global topological informationYan2006 . They found that network capability is improved more than 10 times by optimizing the efficient path. However, the strategy based on global information may be practical for small or medium size networks but not for large real communication such as the Internet, World Wide Web due to large storage capacity in each node and heavy communication cost on searching global information in networksAlbert .

. Liu et al. proposed an adaptive local routing strategy based on real-time load information, in which the node adjusts the forwarding probability with the dynamical traffic load(packet queue length) and the degree distribution of neighbouring nodes. They found it can improve the transmission capacity by reducing routing hops

Liu_CPB . Wang et al. proposed mixing routing strategy by integrating the degree of node and the number of packets with parameter. It’s found this strategy can improve the efficiency comparing with the strategy by adopting exclusive local static informationWang_Mix .

With the development of mobile technology, networks of mobile agents are widely used. A typical example is mobile ad-hoc network, in which agetns move randomly and two agents can transfer data packets with each other only when the distance between them is less than a critical valueAbolhasan ; Camp . Yang et al. proposed a random routing strategy on mobile networks, in which packets deliver to a randomly selected agent in the communication circle. They found an algebraic power law between the throughput and the communication range with an exponent determined by the speedYangHX2011 . Moreover, Yang and Tang proposed an adaptive routing strategy, in which incorporates geographical distance with local traffic information through a tunable parameter. They found there exists an optimal value of the parameter, leading to the maximum traffic throughput of the networkyanghx2014 .

In previous work, queue discipline has little attention in routing strategies. Queue discipline refers to the manner in which packets are selected when arrival packets exceed maximal processing capacity of agentGross . The most common discipline is first-in-first-out. However, this is certainly not the only possible queue discipline. The second is last-in-first-out discipline. A typical example is the last clicked information may be served first in the World Wide Web. The third is priority schemes, in which packets are given priorities, the ones with higher priorities to be selected ahead of those with lower priorities, regardless of their time of arrival to the agent. For example, paid packets with high priority are delivered first when downloaded from a certain web site.

In most existing work, first-in-first-out discipline is widely used. It is simple and convenient, but far from optimal. AS our knowledge, only a few articles use other discipline. Tadić et al. study the web-graph model with last-in-first-out disciplineTadic1 ; Tadic2 ; Tadic3 ; PRE2015 . Kim et al. introduce a priority routing strategy, in which each packet is pre-set a priority. They found the traffic behavior is improved in the congestion region, but worsened in the free flow regionKimPriQue . Tang and Zhou define an effective distance by considering simultaneously the waiting time and remaining path-length to the destination, according to which the packets queue in a descending order of the effective distance. They found it can remarkably enhance the network throughputTang2011 . Du et al. propose a shortest-remaining-path-first queueing strategy in which a packet’s priority is determined by the distance between its current location and destination. They found the traffic efficiency is greatly improved, especially in the congestion stateDu2013 . Zhang et al. introduce a dynamic-information-based queueing strategy, They found the network capacity has no obvious change, but it got significant improvement for some traffic indexes such as average end-to-end delay, rate of queueing delayZhangDIB .

In previous studies, few researchers have applied priority discipline to routing strategy on mobile networks. However, in the real dynamic network, packets are often assign priority. For example, important military information often has a higher delivered priority on mobile ad hoc networks in the battlefield environment. In this article, we propose a shortest-distance-first(SDF) routing strategy on mobile networks, in which packet is delivered first if the distance between location of neighbor agent and its destination is shortest. Compared with first-in-first-out queueing discipline, our strategy not only remarkably improves network throughout and the packet arriving rate, but also reduces average end-to-end delay and the rate of queueing delay.

Traffic is simulated on a random network of mobile agents, i.e., N agents (numbered from 1 to N) move on a square-shaped cell of size L×L. Periodic boundary condition is used. Initially, agents distribute randomly in the area. At each time step Δt, moving direction of an agent is re-directed randomly, while its speed v is selected to be a constant for simplicity. At the same time, a total of R packets are generated in the network, whose source and destination are randomly selected. All the agents have a same communication radius α. Two agents can realize a communicate with each other only when the distance between them is less than α.

The queueing strategies are described as follows:

(1) Parameters setting. We set the number of agents N=800, delivery capability of each node C=1, time step Δt=1, total simulation time T=5000, and the queue buffer of each agent is unlimited.

(2) At each time, R packets with random sources and destinations are generated in the network.

with respect to x-axis, generated by sampling from a uniform distribution in

(5) For each agent, check first M packets in normal order. If packet’s destination is within it’s communication radius, the packet is sent directly to the destination and removed immediately from the system, and set C=C−1. If C=0, go to step (2) for next T.

(6) For a packet m in the system, Dm(t) is defined as the shortest distance between location of neighbor agent and destination of the packet, namely,

(7) If there are no more than C packets in the queue, all the packets are sent to their neighbor agents according to Dm(t). otherwise,

(a) Shortest-distance-first strategy: The first C packets are delivered according to Dm(t) in ascending order.

(b) first-in-first-out strategy: The first C packets are delivered in normal order.

In the present studies the traffic is determined by two competitive factors. The one is the removing packets determined by routing strategy, the communication radius, density of agents, moving speed, and the number of packets transferred. The other is the number of packets produced each time step. When the generating rate of packets is small, new packets can arrive quickly their destination, the load will keep unchanged or even zero, called a free-flow state. When the rate increases to a certain value, averagely at each time step there appear some new packets that can not be delivered to their destination on time. This aggregation of new packets will increases rapidly the load of the network. In reality, a network has a limited capacity, a persistent overload on which will lead to onset of a congestion, i.e., a collapse of the system. To characterize the throughput of a network, we exploit the order parameter η introduced in RefArenas ,

where Np(t) represents the total number of packets existing in the whole network at time t. When R is less than a critical value of Rc, there is a balance between the generated and removed packets, which implies η(R)=0. When R becomes larger than Rc, a transition occurs from a free-flow state to a congestion. A higher Rc corresponds to a better algorithm.

End-to-end delay refers to the time taken for a packet to be transmitted across a network from source to destination. It is defined as

where K is the number of links, Dtrans represents time to send bits into link, Dproc represents nodal processing time, Dprop represents propagation delay, and Dqueue represents time waiting in the queue. Here we focus on Dprop and Dqueue, thus neglect Dtrans and Dproc for simplicity. Average end-to-end delay is defined as

where Di represents end-to-end delay of packet i, Narrive is the number of arrived packets. Average end-to-end delay <D> is an important measurement of a network’s performance. In real communication networks, packets have a finite life time to avoid wasting the network resourcesChen2010 ; Du2011 . For example, an error of packet’s destination may cause the packet to be transmitted endlessly. Therefore, if a packet has been transferred more than finite life time, it will be removed from the networks even if it has not achieved its destination. Obviously, high value of <D> means more packets will be removed before they can achieve their destination.

ii.4 The rate of queueing delay

The rate of queueing delay is defined as

where Di−end−end is the end-to-end delay of packet i, Di−queue is the total delay in the queues of packet i, and Narrive is the number of arrived packets. In general, Q reflects the degree of customer satisfaction. In many systems, such as airlines systems and the World Wide Web, users become impatient if Q is large.

Traffic on mobile networks is a challenging work. However, previous routing strategies have little attention what order should the packets be forwarded, just simply used first-in-first-out queue discipline. Based on queueing theory, we propose a shortest-distance-first strategy, in which packets those have shortest distance are delivered first, regardless of their arrival time.

Our strategy improves remarkably network throughput than the first-in-first-out strategy, especially when agents move at high speed. In addition, our strategy increases the packet arriving rate, and reduces average end-to-end delay and the rate of queueing delay.

We also find critical packet generating rate Rc of the first-in-first-out strategy increases as moving speed increases at the beginning and reaches the maximin value at v=0.1 and then decreases slowly, while that of the shortest-distance-first strategy increases until v=0.7 and then remains stable (∼700). Besides, Rc of the two strategies increases as communication radius increases. Finally, it should be pointed out the priority queue discipline can be applied to other routing strategies. Our work may be helpful in routing strategy designing on mobile networks.

The work is supported by the National Science Foundation of China under Grant Nos 10975099, the Program for Professor of Special Appointment (Orientational Scholar) at Shanghai Institutions of Higher Learning under Grant Nos D-USST02, and the Shanghai project for construction of discipline peaks under Grant No.USST-02-SAI.