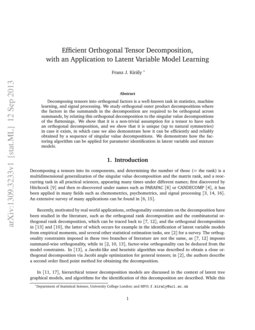 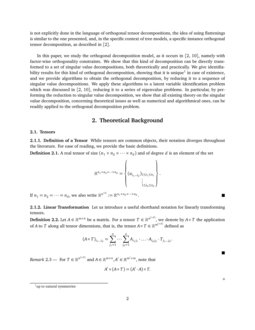 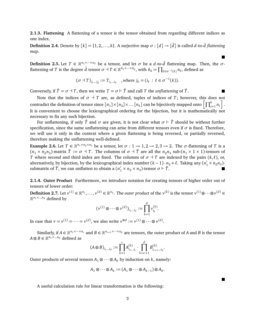 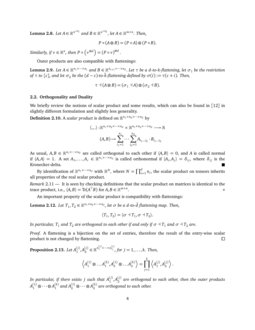 Decomposing a tensors into its components, and determining the number of those (= the rank) is a multidimensional generalization of the singular value decomposition and the matrix rank, and a reoccurring task in all practical sciences, appearing many times under different names; first discovered by Hitchcock [9] and then re-discovered under names such as PARAFAC [8] or CANDECOMP [4], it has been applied in many fields such as chemometrics, psychometrics, and signal processing [3, 16, 14]. An extensive survey of many applications can be found in [15, 6].

, the latter of which occurs for example in the identification of latent variable models from empirical moments, and several other statistical estimation tasks, see

, a Jacobi-like and heuristic algorithm was described to obtain a close orthogonal decomposition via Jacobi angle optimization for general tensors; in

[2], the authors describe a second order fixed point method for obtaining the decomposition.

While tensors are common objects, their notation diverges throughout the literature. For ease of reading, we provide the basic definitions.

Let A∈Rm×n be a matrix. For a tensor T∈Rn(×d), we denote by A∘T the application of A to T along all tensor dimensions, that is, the tensor A∘T∈Rm(×d) defined as

A flattening of a tensor is the tensor obtained from regarding different indices as one index.

Conversely, if ~T=σ⊣T, then we write T=σ⊢~T and call T the unflattening of ~T.

Note that the indices of σ⊣T are, as defined, tuples of indices of T; however, this does not contradict the definition of tensor since [n1]×[n2]×…[nk] can be bijectively mapped onto [∏ki=1ni]. It is convenient to choose the lexicographical ordering for the bijection, but it is mathematically not necessary to fix any such bijection.

For unflattening, if only ~T and σ are given, it is not clear what σ⊢~T should be without further specification, since the same unflattening can arise from different tensors even if σ is fixed. Therefore, we will use it only in the context where a given flattening is being reversed, or partially reversed, therefore making the unflattening well-defined.

Furthermore, we introduce notation for creating tensors of higher order out of tensors of lower order:

Similarly, if A∈Rn1×⋯×nc and B∈Rnc+1×⋯×nd are tensors, the outer product of A and B is the tensor A⊗B∈Rn1×…nd defined as

A useful calculation rule for linear transformation is the following:

We briefly review the notions of scalar product and some results, which can also be found in [12] in slightly different formulation and slightly less generality.

A scalar product is defined on Rn1×n2×⋯×nd by

By identification of Rn1×⋯×nd with RN, where N=∏di=1ni, the scalar product on tensors inherits all properties of the real scalar product.

It is seen by checking definitions that the scalar product on matrices is identical to the trace product, i.e., ⟨A,B⟩=Tr(A⊤B) for A,B∈Rm×n.

An important property of the scalar product is compatibility with flattenings:

In particular, T1 and T2 are orthogonal to each other if and only if σ⊣T1 and σ⊣T2 are.

A flattening is a bijection on the set of entries, therefore the result of the entry-wise scalar product is not changed by flattening. ∎

Using that scalar product on tensors is the trace product (see 2.11), we obtain

The cyclic property of the trace product for matrices yields

All equalities put together yield the claim. ∎

An orthogonal atomic decomposition does not need to exist necessarily. However, if it does, it is compatible with respect to flattenings, as Proposition 2.17 will show. We introduce notation for a more concise statement of the compatibility first:

be an orthogonal atomic decomposition with signature (S1,…,Sk), let σ be compatible with the signature. Then,

This is a direct consequence of Lemma 2.12, checking compatibility of scalar product and orthogonality with the flattening at each of the sets of indices Si. ∎

2.3 Identifiability of the Orthogonal Atomic Decomposition

The orthogonal decomposition, as given in Definition 2.15, does not need to exist for a tensor, nor does it need to be unique. We will show that due to the compatibility with flattenings, if it exists, it is unique, if the rank is chosen minimal.

The main ingredient, besides flattenings, is uniqueness of singular value decomposition [18], a classical result, which we state in a convenient form:

the sequence of summation, i.e., up to arbitrary permutation of the indices i=1,…,n

the choice of sign of wi,ui,vi, i.e., up to changing the sign in any two of wi,ui,vi for fixed i

Condition (c) includes (b) as a special case, and (c) can be removed as a condition if no two distinct wi,wj have the same absolute value.

Let T∈Rn1×n2×⋯×nd, and assume that T has an orthogonal atomic decomposition

There is no orthogonal atomic decomposition of T with signature (S1,…,Sk), and of rank strictly smaller than r.

The orthogonal atomic decomposition of T of rank r is unique, up to:

the sequence of summation, i.e., up to arbitrary permutation of the indices i=1,…,n

the choice of sign of wi,A(k)i, i.e., up to changing the sign in any two of wi and the A(k)i for fixed i and arbitrary k

transformations of factors A(k)i,A(k)j, and their respective tensor products, such that |wi|=|wj|, which induce unitary transformations in all flattenings compatible with the signature (S1,…,Sk).

Condition (c) includes (b) as a special case, and (c) can be removed as a condition if no two distinct wi,wj have the same absolute value.

Fix some arbitrary j. Consider the d-to-2-flattening σ:Sj↦{1},Si↦{2} for i≠j, note that σ is compatible with the signature. Let m=Nj,n=∏i≠jNi, and A=σ⊣T. Note that A is a (m×n)-matrix. Let

be the orthogonal atomic decomposition of T, and let ui=σ⊣A(j)i, and vi=σ⊣⨂k≠jA(k)i for all i. Note that ui is an m

is a singular value decomposition of A.

Another result which seems to be folklore, but not available in the literature, is that it is a strong restruction for a tensor to assume that it has an orthogonal decomposition. Since it is almost implied by the identifiability Theorem 2, we state a quantitative version of this:

The set of tensors T∈Rn1×n2×⋯×nd, with d≥3, and nj≥2 for all j, for which T has an orthogonal CP-decomposition, is a Lebesgue zero set.

The CP-decomposition can be viewed as an algebraic map

Since the left hand side is an irreducible variety, the image of the map ϕ also is. The orthogonal CP-decompositions form an algebraic subset of the left hand side. Therefore the state follows from the fact that ϕ

is not surjective. This follows from a degree of freedom resp. dimension count. One has

An explicit computation shows that D1⪈D2, which proves the statement.

The proof above can be rephrased in terms of the CP-rank (see [5] for an introduction), can be obtained by observing that the generic CP-rank of the tensors in questions must be strictly larger than min(n1,…,nk), then proceeding again by arguing that the algebraic set of tensors with orthogonal CP-decompositions must be a proper subset of all tensors with that format, thus a Lebesgue zero set. ∎

Proposition 2.18 can be extended to orthogonal atomic decompositions with signature (S1,…,Sk),k≥3, by considering suitable unflattenings.

We briefly show how tensors relate to moments of multivariate real random variables:

Let X be a real n-dimensional random variable. Then, define:

where τ∈R1×n is a formal vector of variables. The d-th moment (or moment tensor) Md(X)∈Rn(×d) of X, and the d-th cumulant (or cumulant tensor) κd(X)∈Rn(×d) of X are defined222in case of convergence as the coefficients in the multivariate Taylor expansions

In the following, we will always assume that the moments and cumulants in question exist.

Let X be a real n-dimensional random variable and let A∈Rm×n. Then,

We prove the statement for cumulants, the proof for moments is completely analogous. For the cumulant generating functions χX of X and χA⋅X of A⋅X, it holds that

The last equality follows from the definition of χX(τ). But by definition, it also holds that

Throughout the paper, we will consider the following independent rank 1 mixture model:

While the above scenario seems very restrictive, several important problems can be reduced to this setting, see for example [10], or chapter 3 of [2]. We recommend the interested reader to read the exposition there.

Algebraic Problem: Let r≤n, let μ1,…,μr∈Rn be linearly independent and w1,…,wr∈R arbitrary such that ∑ri=1wi=1. Given (exact or noisy estimators for)

determine the μi and wi.

First, for completeness, we treat the trivial case in Algorithm 2.

The algorithm for the general case, Algorithm 4, consists as well of repeated applications of reindexing and singular value decomposition. Variants of singular value decomposition exist with adjustable noise tolerance or singular value thresholding, and can therefore be employed to obtain thresholding and numerically stable variants of Algorithm 4. Furthermore, step 1 allows for an arbitrary choice of k-to-2-flattening, in each recursion. Since in the presence of noise, the results might differ when taking a different sequence flattenings, the numerical stability can be improved by clustering the results of all possible choices, then averaging.

Termination of Algorithm 4 is implied by the observation that in each recursion, the partition of [d] is made strictly finer. Since [d] has finite cardinality, there is only a finite number of recursions. The fact that the decompositions in steps 6 and 7 have rank one, and coefficients 1, follows from the uniqueness of the orthogonal decomposition guaranteed in Theorem 2. Correctness of Algorithm 4 follows from repeated application of Proposition 2.17, and the uniqueness of singular value decomposition.

4.2 An Estimator for the Mixture Model

For illustrative purposes, we write out Algorithm 4 for the problem introduced in 3, which has also extensively been studied in [2]:

Example: Let r≤n, let μ1,…,μr∈Rn be linearly independent and w1,…,wr∈R arbitrary such that ∑ri=1wi=1. Given (exact or noisy estimators for)

determine the μi and wi.

Algorithm 5 solves the problem, by reducing it to

Theorem 4.3 in [2] implies that the tensor T obtained in step 4 has an orthogonal CP-decomposition, and it implies the correctness of steps 8, and 12. The fact that ~Ai in step 8 has rank one, and the coefficients are 1, follow from the uniqueness of the decomposition guaranteed in Theorem 2.

Note that explicit presentation of the algorithm could be substantially abbreviated by applying ODT directly to ~T in step 4, with signature ({1},{2,3}), and then performing the analogues of steps 8 and 12. Furthermore, the accuracy of the estimator in step 11 can be improved, by repeating the procedure for the three possible signatures ({1},{2,3}),({2},{1,3}), and ({3},{1,3}), then averaging, or weighted averaging, over the nine estimates for each ~μi, making use of the symmetry of the problem.

Also, similar to Algorithm 4, the presented Algorithm 5, while already numerically stable, can be modified to cope better with noise by, e.g., introducing thresholding to the singular value decomposition and rank computations. The numerical stability with respect to noise is governed by the numerical stability of the SVDs performed, and the pseudo-inversion of W′ in step 12.

Algorithm 5 is also related to Algorithm 1 proposed in  [1]. Namely, Triples(η), as defined in section 4.1, is a degree 2-projection of the tensor T, and therefore can be also understood as a random projection of the flattening σ⊣T.

Furthermore, an estimator for the hierarchical models described in [11, 17] can be constructed in a similar way.

I thank Arthur Gretton, Zoltán Szabó, and Andreas Ziehe for interesting discussions. I thank the Mathematisches Forschungsinstitut Oberwolfach for support.