Neutrino oscillation study involves inferences from tiny samples of data which have complicated dependencies on multiple oscillation parameters simultaneously. This is typically carried out using the unified approach of Feldman and Cousins which is very computationally expensive, on the order of tens of millions of CPU hours. In this work, we propose an iterative method using Gaussian Process to efficiently find a confidence contour for the oscillation parameters and show that it produces the same results at a fraction of the computation cost. 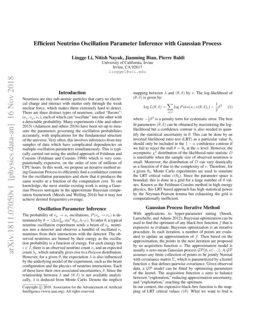 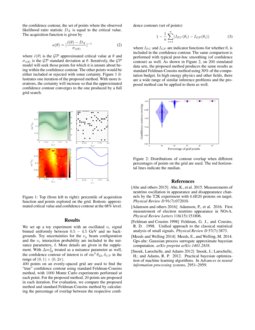 Neutrinos are tiny sub-atomic particles that carry no electrical charge and interact with matter only through the weak nuclear force, which makes them extremely hard to detect. There are three distinct types of neutrinos, called “flavors”: (νe, νμ, ντ

), each of which can “oscillate” into the other with a detectable probability. Many experiments

[Abe and others2015] [Adamson and others2016] have been set-up to measure the parameters governing the oscillation probabilities accurately, with implications for the fundamental structure of the universe. Very often, this involves inferences from tiny samples of data which have complicated dependencies on multiple oscillation parameters simultaneously. This is typically carried out using the unified approach of Feldman and Cousins [Feldman and Cousins1998] which is very computationally expensive, on the order of tens of millions of CPU hours. In this work, we propose an iterative method using Gaussian Process to efficiently find a confidence contour for the oscillation parameters and show that it produces the same results at a fraction of the computation cost. To our knowledge, the most similar existing work is using a Gaussian Process surrogate in the approximate Bayesian computation framework [Meeds and Welling2014] but it may not achieve desired frequentist coverage.

The probability of νμ→νe oscillations, P(νμ→νe) is determined by θ=(Δm232,sin2θ23,δCP). To infer θ, a typical neutrino oscillation experiment sends a beam of νμ neutrinos into a detector and observes a handful of oscillated νe neutrinos from their interactions with the detector. The observed neutrinos are binned by their energy as the oscillation probability is a function of energy. For each energy bin i∈I, there is an observed neutrino count xi and an expected count λi, which naturally gives rise to a Poisson distribution. However, for a given θ, the expectation λ is also influenced by the underlying model of the experiment, such as the beam configuration and the physics of neutrino interactions. Each of these have their own associated uncertainties, δ. Since the relationship between λ and (θ,δ) is not available analytically, λ is deduced from Monte Carlo. Denote the implicit mapping between λ and (θ,δ) by v. The log-likelihood of (θ,δ) is given by:

where −12δ2 is a penalty term for systematic error. The best fit parameters (^θ,^δ) can be obtained by maximizing the log-likelihood but a confidence contour is also needed to quantify the statistical uncertainty in ^θ. This can be done by an inverted likelihood ratio test (LRT) as a particular value θ0 should only be included in the 1−α confidence contour if we fail to reject the null θ=θ0 at the α level. However, the asymptotic χ2 distribution of the likelihood ratio statistic D is unreliable when the sample size of observed neutrinos is small. Moreover, the distribution of D can vary drastically as a function of θ due to the complexity of v. Therefore, for a given θ0, Monte Carlo experiments are used to simulate the LRT critical value c(θ0). Since the parameter space is bounded, this is done in a grid for a large number of θ values. Known as the Feldman-Cousins method in high energy physics, this LRT based approach has high statistical power by the Neyman-Pearson lemma but exhausting the grid is computationally inefficient.

With applications to hyper-parameter tuning [Snoek, Larochelle, and Adams2012], Bayesian optimization can be used to find the optimum of any black-box function f that is expensive to evaluate. Bayesian optimization is an iterative procedure. In each iteration, a number of points are evaluated to update an approximation of f. Then based on the approximation, the points in the next iteration are proposed by an acquisition function a. The approximation model is usually a zero-mean Gaussian process GP(0,κ(⋅,⋅)). A GP assumes any finite collection of points to be jointly Normal with covariance matrix Σ, which is parametrized by a kernel function κ that defines pairwise covariance. Given observed data, a GP model can be fitted by optimizing parameters of the kernel. The acquisition function a aims to balance between “exploration,” reducing approximation uncertainty, and “exploitation,” reaching the optimum. In our context, the expensive black-box function is the mapping of LRT critical values c(θ). What we want to find is the confidence contour, the set of points where the observed likelihood ratio statistic DX is equal to the critical value. The acquisition function is given by

where ^c(θ) is the GP approximated critical value at θ and σ^c(θ) is the GPstandard deviation at θ. Iteratively, the GP model will seek those points for which it is unsure about being within the confidence contour. The other points would be either included or rejected with some certainty. Figure 1 illustrates one iteration of the proposed method. With more iterations, the certainty will increase so that the approximated confidence contour converges to the one produced by a full grid search.

We set up a toy experiment with an oscillated νe signal binned uniformly between 0.5−4.5 GeV and no backgrounds. Toy uncertainties for the νμ beam configuration and the νe interaction probability are included in the nuisance parameters, δ. More details are given in the supplement. With Δm232 treated as a nuisance parameter as well, the confidence contour of interest is of sin2θ23,δCP in the range of (0,1)×(0,2π). 400 points on an evenly-spaced grid are used to find the “true” confidence contour using standard Feldman-Cousins method, with 1000 Monte Carlo experiments performed at each point. For the proposed method, 20 points are proposed in each iteration. For evaluation, we compare the proposed method and standard Feldman-Cousins method by calculating the percentage of overlap between the respective confidence contours (set of points)

where IFC and IGP are indicator functions for whether θi is included in the confidence contour. The same comparison is performed with typical post-hoc smoothing (of confidence contour) as well. As shown in Figure 2, on 200 simulated data sets, the proposed method produces the same results as standard Feldman-Cousins method using 30% of the computation budget. In high energy physics and other fields, there are a wide range of similar inference problems and the proposed method can be applied to them as well.