In object recognition, Fisher vector (FV) representation is one of the state-of-art image representations ways at the expense of dense, high dimensional features and increased computation time. A simplification of FV is attractive, so we propose Sparse Fisher vector (SFV). By incorporating locality strategy, we can accelerate the Fisher coding step in image categorization which is implemented from a collective of local descriptors. Combining with pooling step, we explore the relationship between coding step and pooling step to give a theoretical explanation about SFV. Experiments on benchmark datasets have shown that SFV leads to a speedup of several-fold of magnitude compares with FV, while maintaining the categorization performance. In addition, we demonstrate how SFV preserves the consistence in representation of similar local features. 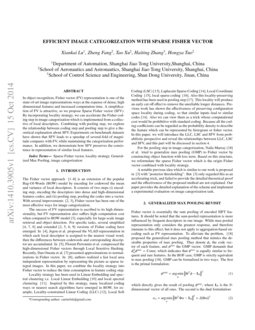 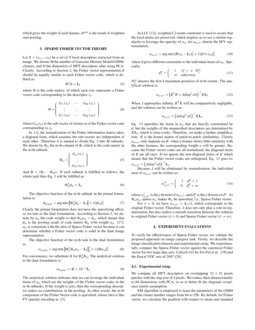 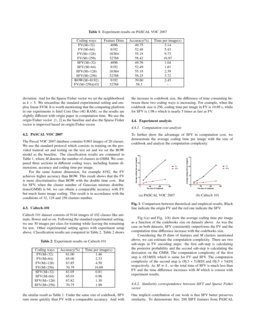 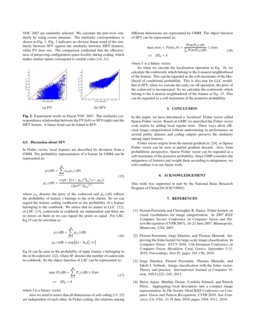 Probing the Intra-Component Correlations within Fisher Vector for Material Classification

In this paper, we propose a new unsupervised feature learning framework,...
Yunlong He, et al. ∙

What is the right way to represent document images?

is an extension of the popular Bag-Of-Words (BOW) model by encoding for codeword the mean and variance of local descriptors. It consists of two steps (i) encoding step, encoding the descriptors into dense and high-dimensional features codes; and (ii) pooling step, pooling the codes into a vector. With several improvements

[2, 3], Fisher vector has been one of the most effective ways for image categorization.

[4, 7, 8] and extended [2, 5, 6, 9] versions of Fisher coding have emerged. In  [4], Jegou et al. proposed the VLAD representation in which each local descriptor is assigned to the nearest visual word, then the differences between codewords and corresponding descriptor are accumulated. In  [5], Florent Perronnin et al. compressed the high-dimensional Fisher vectors through Local Sensitive Hashing. Recently, Dan Oneata et al. [7] presented approximations to normalizations in Fisher vector. In  [8], authors realized a fast local area independent representation by representing the picture as sparse integral images. In this paper, we combine the locality strategy into Fisher vector to reduce the time consumption in feature coding step.

. Also we can view them as a trick whose computational cost would be prohibitive with standard coding. Because all the coding coefficients can be regarded as the probability density to describe the feature which can be represented by histogram or fisher vector. In this paper, we will introduce the LLC, LSC and SFV from probabilistic perspective and reveal the relationships between LLC, LSC and SFV, and this part will be discussed in section 4.

For the pooling step in image categorization, Naila Murray [18] et al. tried to generalize max pooling (GMP) to Fisher vector by constructing object function with loss term. Based on this structure, we reformulate the sparse Fisher vector which is the origin Fisher vector combined with locality strategy.

A notable previous idea which is similar to our work is proposed in  [3] with ”posterior thresholding”. But  [3] only regarded this as an accelerating trick, and failed to provide the detailed theoretical proof and the effectiveness of the proposed method are not explained. Our paper provides the detailed explanation of the scheme and implement a experimental evaluation on image categorization task.

Fisher vector is essentially the sum pooling of encoded SIFT features. It should be noted that the sum-pooled representation is more influenced by frequent descriptors in one image. While max-pooled representation only considers the greatest response, and therefore immune to this effect, but it does not apply to aggregation-based encoding such as FV representation. To alleviate the problem,  [18] proposed the generalized max pooling method that mimics the desirable properties of max pooling. They denote ϕn the code vector of each feature, and ϕmax the GMP vector. GMP demands that ϕTnϕmax=Const, which indicates that ϕmax is equally similar to frequent and rare features. In the BOF case, GMP is strictly equivalent to max pooling [18]. GMP can be formalized in two ways. The first is the primal formulation:

which directly gives the result of pooling ϕgmp, where 1N is the N-dimensional vector of all ones. The second is the dual formulation:

which gives the weight of each feature. ϕgmp is the result of weighted sum pooling.

Let X={x1,....xN} be a set of N local descriptors extracted from an image. We denote M

the number of Gaussian Mixture Model(GMM) clusters, and

D the dimension of SIFT descriptors after using PCA. Clearly. According to Section 2, the Fisher vector representation ϕ should be equally similar to each Fisher vector code, which is defined as:

where Φ is the code matrix, of which each row represents a Fisher vector code corresponding to the descriptor \emphxn.

where Gm(xn) is the sub-vector of cluster m of the Fisher vector code corresponding to \emphxn.

In  [1], the normalization of the Fisher information matrix takes a diagonal form, which assumes the sub-vectors are independent of each other. Therefore it is natural to divide Eq. 3 into M subtasks. We denote by Φm the m-th column of Φ, which is the code matrix in the m-th subtask:

And Φ=(Φ1⋯ΦM). If each subtask is fulfilled as follows, the whole task likes Eq. 3 will be fulfilled as:

The objective function of the m-th subtask in the primal formulation is:

Clearly the primal formulation does not have the sparsifying effect, so we turn to the dual formulation. According to Section 2, we denote by αm the code weight so that Φmαm=ϕm, which means that ϕm is the pooling result of code matrix Φm with weight αm  [17]. αm is consistent with the idea of Sparse Fisher vector because it can determine whether a Fisher vector code is valid in the final image representation.

The objective function of the m-th task in the dual formulation is:

For convenience, we substitute K for ΦTmΦm. The analytical solution to the dual formulation is:

The analytical solution indicates that we can leverage the individual items of αm which are the weights of the Fisher vector codes in the m-th subtasks. If the weight is zero, then the corresponding descriptor makes no contributions in the pooling. In other words, the m-th component of the Fisher Vector code is sparsified, whose idea is like FV sparsity encoding in  [3].

In LLC [12], weighted L2-norm constraint is used to assure that the local atoms are preserved, which inspires us to use a similar regularity to leverage the sparsity of αm, let αm,sfv denote the SFV representation,

where d gives different constraints to the individual items of αm. Specially,

When λ approaches infinity, KTK will be comparatively negligible, and the solution can be written as:

Eq. 13 sparsifies the items in αm that are heavily constrained by d, but the weights of the unsparsified descriptors are determined by K1N, which is time-costly. Therefore, we make a further simplification. K is the kernel matrix of patch-to-patch similarities. Clearly αm,sfv only depends on K: when a feature shows little similarity with the other features, the corresponding weight α will be greater. Because the Fisher vector codes are all normalized, the diagonal items of K are all ones. If we ignore the non-diagonal items of K which means that the Fisher vector codes are orthogonal, Eq. 13 goes to: αm,sfv=(λdiag2(d))−11N.

Because λ will be eliminated by normalization, the individual item of αm,sfv can be written as:

We compute all SIFT descriptors on overlapping 32×32 pixels patches with the step size of 4 pixels. We reduce their dimensionality to 64 dimensions with PCA, so as to better fit the diagonal covariance matrix assumption.

EM algorithm is employed to learn the parameters of the GMM and the cluster number ranges from 64 to 256. By default, for Fisher vector, we calculate the gradient with respect to mean and standard deviation. And for the Sparse Fisher vector we set the neighborhood as

\emphk=5. We streamline the standard experimental setting and employ linear SVM. It is worth mentioning that the computing platform in our experiments is Intel Core Duo (4G RAM), so the results are slightly different with origin paper in computation time. We use the origin Fisher vector  [1, 2] as the baseline and also the Sparse Fisher vector is improved based on origin Fisher vector.

The Pascal VOC 2007 database contains 9,963 images of 20 classes. We use the standard protocol which consists in training on the provided trainval set and testing on the test set and we set the BOW model as the baseline. The classification results are compared in Table 1, where M denotes the number of clusters in GMM. We compared three sections in different coding ways, including feature dimensions, accuracy and coding time per image.

For the same feature dimension, for example 8192, the FV achieves higher accuracy than BOW. This result shows that the FV is more discriminative than BOW with the double time cost. But for SFV, when the cluster number of Gaussian mixture distributions(GMM) is 64, we can obtain a comparable accuracy with FV but much faster image coding. This result is in accordance with the conditions of 32, 128 and 256 clusters number.

Caltech 101 dataset consists of 9144 images of 102 classes like animals, flower and so on. Following the standard experimental setting, we use 30 images per class for training while leaving the remaining for test. Other experimental setting agrees with experiment setup above. Classification results are compared in Table 2.

Table 2 shows the similar result as Table 1. Under the same size of codebook, SFV runs more quickly than FV with a comparable accuracy. And with the increase in codebook size, the difference of time consuming between these two coding ways is increasing. For example, when the codebook size is 256, coding time per image in FV is 10.69 s, while for SFV is 1.98 s which is nearly 5 times as fast as FV.

To further show the advantage of SFV in computation cost, we demonstrate the average coding time per image with the size of codebook and analyze the computation complexity.

Fig.1(a) and Fig. 1(b) show the average coding time per image as a function of the codebooks size on datasets above. As was the case on both datasets, SFV consistently outperforms the FV and the computation time difference increase with the codebooks size.

Considering the D dims of features and M

O[3MD] which is same for FV and SFV. The computaion complexity of the second step is O[(3+5)MD] and O[(3+5)kD] respectively. As M≫k , so the total time of SFV is much less than FV and the time difference increases with M which is consist with experiment results.

In Fisher vector, local features are described by deviation from a GMM. The probability representation of a feature by GMM can be represented as:

where ωm denotes the prior of the codeword and pm(x|θ) reflects the probability of feature x belongs to the m-th cluster. So we can regard the feature coding coefficient as the probability of a feature belonging to the codebook. We notice that no matter in LLC  [12], or LSC [13], codewords in codebook are independent and there are no priors on them or we can regard the priors as equal. For LSC, Eq.15 can be rewritten as:

Eq.16 can be seen as the probability of input feature x belonging to the m-th codeword  [22], where M denotes the number of codewords in codebook. So the object function of LSC can be represented as:

where I is a binary vector.

Also we need to notice that all dimensions of soft coding [13, 23] are independent of each other. In Fisher coding, the relations among different dimensions are represented by GMM. The object function of SFV can be represented as:

where I is a binary vector.

In this paper, we have introduced a ’localized’ Fisher vector called Sparse Fisher vector. Based on GMP, we sparsified the Fisher vector code matrix by adding local regular term. These ways allow efficient image categorization without undermining its performance on several public datasets and coding outputs preserve the similarity among input features.

This work was supported in part by the National Basic Research Program of China(2012CB719903).