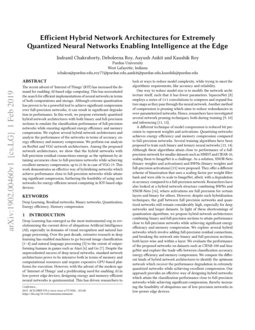 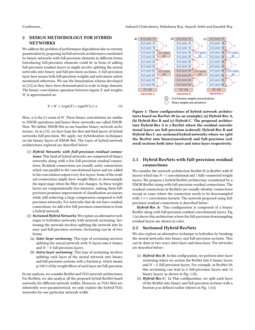 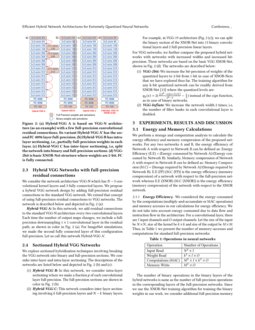 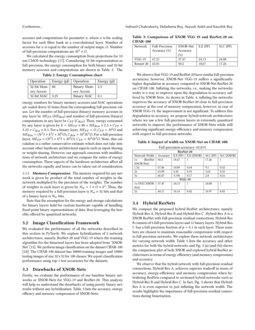 PCA-driven Hybrid network design for enabling Intelligence at the Edge

The pervasiveness of "Internet-of-Things" in our daily life has led to a...
Yinghan Long, et al. ∙

The effectiveness of shortcut/skip-connection has been widely verified, ...
Yilin Liao, et al. ∙

Deep Learning has emerged as the most instrumental cog in revolutionizing the current drive of ubiquitous Artificial Intelligence (AI), especially in domains of visual recognition and natural language processing. Over the past decade, extensive research in deep learning has enabled machines to go beyond image classification

(Krizhevsky et al., 2012; Szegedy et al., 2015; He et al., 2016; Girshick et al., 2015) and natural language processing (Mikolov et al., 2013) to the extent of outperforming humans in games such as Atari (Mnih et al., 2015) and Go (Silver et al., 2017). Despite the unprecedented success of deep neural networks, standard network architectures prove to be intensive both in terms of memory and computational resources and require expensive GPU-based platforms for execution. However, with the advent of the modern age of ‘Internet of Things’ and a proliferating need for enabling AI in low-power edge devices, designing energy and memory-efficient neural networks is quintessential. This has driven researchers to look at ways to reduce model complexity, while trying to meet the algorithmic requirements, like accuracy and reliability.

One way to reduce model size is to modify the network architecture itself, such that it has fewer parameters. SqueezeNet (Iandola et al., 2016) employs a series of 1×1 convolutions to compress and expand feature maps as they pass through the neural network. Another method of compression is pruning which aims to reduce redundancies in over-parameterized networks. Hence, researchers have investigated several network pruning techniques, both during training (Alvarez and Salzmann, 2017; Weigend et al., 1991) and inferencing (Han et al., 2015; Ullrich et al., 2017).

were proposed. They offer a different scheme of binarization that uses a scaling factor per weight filter bank and were able to scale to ImageNet, albeit, with a degradation in accuracy compared to a full-precision network. Researchers have also looked at a hybrid network structure combining BWNs and XNOR-Nets

Here, α is the L1-norm of W. These binary convolutions are similar to XNOR operations and hence these networks are called XNOR-Nets. We define XNOR-Net as our baseline binary network architecture. As in (Rastegari et al., 2016), we have kept the first and final layers of hybrid networks full-precision. We apply our hybridization techniques on the binary layers of XNOR-Net. The types of hybrid network architectures explored are described below:

In our analysis, we consider ResNet and VGG network architectures. For ResNets, we also analyze all the proposed hybrid ResNet-based networks for different network widths. However, as VGG-Nets are inherently over-parameterized, we only explore the hybrid VGG networks for one particular network width.

Hybrid-Res A: This configuration is comprised of a binary ResNet along with full-precision residual convolutional layers. Fig. 1 (a) shows this architecture where the full-precision downsampling residual layers are shown in color.

We also explore an alternative technique to hybridize by breaking the neural networks into binary and full-precision sections. This can be done in two ways, inter-layer and intra-layer. The networks are described below:

Hybrid-VGG A: In this network, we add residual connections to the standard VGG-N architecture every two convolutional layers. Each time the number of output maps changes, we include a full-precision downsampling 1×1 convolutional layer in the residual path, as shown in color in Fig. 2 (a). For ImageNet simulations, we made the second fully connected layer of this configuration full-precision. Let us call this network Hybrid-VGG A’.

We explore sectioned hybridization techniques involving breaking the VGG network into binary and full-precision sections. We consider inter-layer and intra-layer sectioning. The descriptions of the networks are listed below and depicted in Fig. 2 (b) and (c):

We considered the energy consumed by the computations (multiply-and-accumulate or MAC operations) and memory accesses in our calculations for energy efficiency. We do not take into account energy consumed due to data flow and instruction flow in the architecture. For a convolutional layer, there are I input channels and O output channels. Let the size of the input be N×N, size of the kernel be k×k and size of the output be M×M. Thus, in Table 1 we present the number of memory-accesses and computations for standard full-precision networks:

. Note, this calculation is a rather conservative estimate which does not take into account other hardware architectural aspects such as input-sharing or weight-sharing. However, our approach concerns with modifications of network architecture and we compare the ratios of energy consumption. These aspects of the hardware architecture affect all the networks equally and hence can be taken out of consideration.

Note that the assumption for the energy and storage calculations for binary layers hold for custom hardware capable of handling fixed-point binary representations of data, thus leveraging the benefits offered by quantized networks.

We evaluated the performance of all the networks described in this section in PyTorch. We explore hybridization of 2 network architectures, namely, ResNet-20 and VGG-19 where the training algorithm for the binarized layers has been adopted from ‘XNOR-Net’

(Rastegari et al., 2016). We perform image classification on the dataset CIFAR-100 (Krizhevsky and Hinton, 2009). The CIFAR-100 dataset has 50000 training images and 10000 testing images of size 32×32 for 100 classes. We report classification performance using top-1 test accuracies for the datasets.

Firstly, we evaluate the performance of our baseline binary networks or XNOR-Nets for VGG-19 and ResNet-20. This analysis will help us understand the drawbacks of using purely binary networks without any hybridization. Table. 3 lists the accuracy, energy effiency and memory compression of XNOR-Nets:

We observe that the hybrid network with full-precision residual connections, Hybrid-Res A, achieves superior tradeoff in terms of accuracy, energy-efficiency and memory compression when hybridizing ResNets compared to sectioned hybrid networks such as Hybrid-Res B and Hybrid-Res C. In fact, Fig. 3 shows that Hybrid-Res A is even superior to just inflating the network width. The results highlights the importance of full-precision residual connections during binarization.

Fig. 4 (a) ( and (b)) shows the comparison of networks in terms of accuracy and energy-efficiency (and memory-compression). We observe that the hybrid VGG network with full-precision residual connections (Hybrid-VGG A) achieves the best accuracy while achieving the highest compression and energy efficiency compared to other hybrid networks. We show that Hybrid-VGG A can improves the performance of a VGG XNOR baseline by 25 % while achieving 19.5× the energy efficiency and 21.8× the memory compression compared to a full-precision network. Sectioning the network such that the final 3 fully connected layers are full-precision, as in Hybrid-VGG C, do not match Hybrid-VGG A in terms of accuracy despite losing significantly in efficiency and compression. Interestingly, Hybrid-VGG A performs better than Hybrid-VGG B, despite the latter being an alternative network where full-precision information is carried in parallel. To summarize, Hybrid-VGG A emerge as the most optimum hybrid network which is also significantly superior to VGG-2bit and inflated binarized VGG network. These results further show that hybrid networks with full-precision residual connections offer the best tradeoff for improving the performance extremely quantized networks.

The dataset ImageNet (Deng et al., 2009) is the most challenging dataset pertaining to image classification tasks which is used by the competition ImageNet Large-Scale Visual Recognition Challenge (ILSVRC) to perform the experiments. This subset consists of 1.2 million training images and 50000 validation images divided into 1000 categories. We consider the network VGG-19 for our evaluation and compare Hybrid-VGG A with the VGG-19 XNOR baseline and Hybrid-VGG C. For further comparison, we use a variant of Hybrid-VGG A, described in Section 2.3, named Hybrid-VGG A’. Table. 7 lists the accuracy, energy efficiency and memory compression for the explored networks. We observe that although Hybrid-VGG A does not enhance the performance signficantly, using an additional full-precision linear layer as in Hybrid-VGG A’ can increase the performance of the XNOR-Net baseline by ∼ 20 % while still achieving 13.1 × the energy efficiency compared to full-precision networks. Hybrid-VGG C matches the performance of Hybrid-VGG A’, however, at the cost of compression. The results show that the superiority of hybrid networks with full-precision residual connections over other hybrid networks hold true even for larger datasets.

The humongous computing power and memory requirements of deep networks stand in the way of ubiquitous use of AI for performing on-chip analytics in low-power edge devices. Memory compression along with the close match to state-of-art accuracies offered by the hybrid extremely quantized networks go a long way to address that challenge. The significant energy efficiency offered by the compressed hybrid networks increases the viability of using AI, powered by deep neural networks, in edge devices. With the proliferation of connected devices in the IOT environment, AI-enabled edge computing can reduce the communication overhead of cloud computing and augment the functionalities of the devices beyond primitive tasks such as sensing, transmission and reception to in-situ processing.