In prevalent cohort studies where subjects are recruited at a cross-section, the time to an event may be subject to length-biased sampling, with the observed data being either the forward recurrence time, or the backward recurrence time, or their sum. In the regression setting, it has been shown that the accelerated failure time model for the underlying event time is invariant under these observed data set-ups and can be fitted using standard methodology for accelerated failure time model estimation, ignoring the length-bias. However, the efficiency of these estimators is unclear, owing to the fact that the observed covariate distribution, which is also length-biased, may contain information about the regression parameter in the accelerated life model. We demonstrate that if the true covariate distribution is completely unspecified, then the naive estimator based on the conditional likelihood given the covariates is fully efficient. 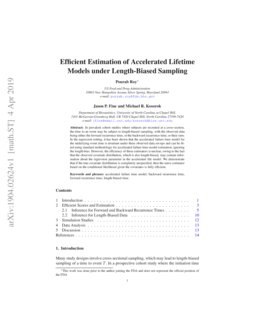 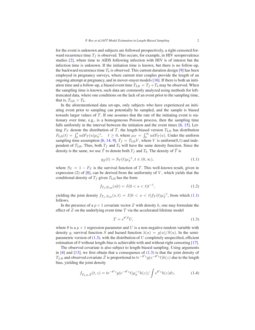 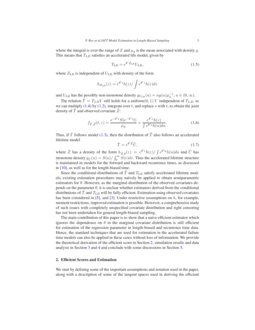 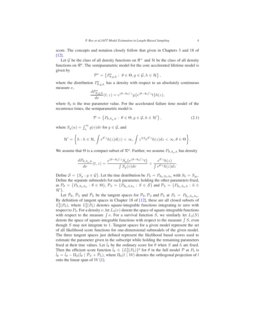 Many study designs involve cross-sectional sampling, which may lead to length-biased sampling of a time to event T. In a prospective cohort study where the initiation time for the event is unknown and subjects are followed prospectively, a right-censored forward recurrence time Tf is observed. This occurs, for example, in HIV seroprevalence studies [2], where time to AIDS following infection with HIV is of interest but the infection time is unknown. If the initiation time is known, but there is no follow-up, the backward recurrence time Tb is observed. This current duration design [9] has been employed in pregnancy surveys, where current trier couples provide the length of an ongoing attempt at pregnancy, and in mover-stayer models [16]. If there is both an initiation time and a follow-up, a biased event time TLB=Tf+Tb may be observed. When the sampling time is known, such data are commonly analyzed using methods for left-truncated data, where one conditions on the lack of an event prior to the sampling time, that is, TLB>Tb.

In the aforementioned data set-ups, only subjects who have experienced an initiating event prior to sampling can potentially be sampled, and the sample is biased towards larger values of T. If one assumes that the rate of the initiating event is stationary over time, e.g., is a homogeneous Poisson process, then the sampling time falls uniformly in the interval between the initiation and the event times [6, 15]. Letting FT denote the distribution of T, the length-biased version TLB has distribution FLB(t)=∫t0udFT(u)μ−1T, t≥0, where μT=∫∞0udFT(u). Under the uniform sampling time assumption [6, 14, 9], Tf=TLBV, where V is uniform(0,1) and independent of TLB. Thus, both Tf and Tb will have the same density function. Since the density is the same, we use ~T to denote both Tf and Tb. The density of ~T is

where ST=1−FT is the survival function of T. This well-known result, given in expression (2) of [8], can be derived from the uniformity of V, which yields that the conditional density of Tf given TLB has the form

In the presence of a p×1

Z with density h, one may formulate the effect of Z on the underlying event time T via the accelerated lifetime model

where θ is a p×1 regression parameter and U

is a non-negative random variable with density

g, survival function S and hazard function λ(u)=g(u)/S(u). In the semiparametric version of (1.3), with the distribution of U completely unspecified, efficient estimation of θ without length-bias is achievable with and without right censoring [17].

where the integral is over the range of Z and μg is the mean associated with density g. This means that TLB satisfies an accelerated life model, given by

where ZLB is independent of ULB with density of the form

The relation ~T=TLBV still holds for a uniform(0,1) V independent of TLB, so we can multiply (1.4) by (1.2), integrate over t, and replace s with t, to obtain the joint density of ~T and observed covariate ~Z:

Thus, if T follows model (1.3), then the distribution of ~T also follows an accelerated lifetime model

where ~Z has a density of the form h~Z,θ(z)=eθ′zh(z)/∫eθ′uh(u)du and ~U has monotone density g~U(u)=S(u)/∫∞0S(v)dv. Thus the accelerated lifetime structure is maintained in models for the forward and backward recurrence times, as discussed in [10], as well as for the length-biased time.

Since the conditional distributions of ~T and TLB satisfy accelerated lifetime models, existing estimation procedures may naively be applied to obtain semiparametric estimators for θ. However, as the marginal distribution of the observed covariates depends on the parameter θ, it is unclear whether estimators derived from the conditional distributions of ~T and TLB will be fully efficient. Estimation using observed covariates has been considered in [5], and [3]. Under restrictive assumptions on h

, for example, moment restrictions, improved estimation is possible. However, a comprehensive study of such issues with completely unspecified covariate distribution and right censoring has not been undertaken for general length-biased sampling.

The main contribution of this paper is to show that a naive efficient estimator which ignores the dependence on θ in the marginal covariate distribution is still efficient for estimation of the regression parameter in length-biased and recurrence time data. Hence, the standard techniques that are used for estimation in the accelerated failure time models can also be applied in these cases without loss of information. We provide the theoretical derivation of the efficient score in Section 2, simulation results and data analysis in Section 3 and 4 and conclude with some discussions in Section 5.

We start by defining some of the important assumptions and notation used in the paper, along with a description of some of the tangent spaces used in deriving the efficient score. The concepts and notation closely follow that given in Chapters 3 and 18 of [12].

where the distribution P∗θ,g,h has a density with respect to an absolutely continuous measure ν,

where θ0 is the true parameter value. For the accelerated failure time model of the recurrence times, the semiparametric model is

We assume that Θ is a compact subset of Rp. Further, we assume Pθ,Sg,h has density

Let ˙Pθ, ˙PS and ˙Ph be the tangent spaces for Pθ,PS and Ph at P0=Pθ0,S0,h0. By definition of tangent spaces in Chapter 18 of [12], these are all closed subsets of L02(P0), where L02(P0) denotes square-integrable functions integrating to zero with respect to P0. For a density ν, let L2(ν) denote the space of square-integrable functions with respect to the measure ∫ν. For a survival function S, we similarly let L2(S) denote the space of square-integrable functions with respect to the measure ∫S, even though S may not integrate to 1. Tangent spaces for a given model represent the set of all likelihood score functions for one-dimensional submodels of the given model. The three tangent spaces just defined represent the likelihood based scores used to estimate the parameter given in the subscript while holding the remaining parameters fixed at their true values. Let ˙lθ be the ordinary score for θ when S and h are fixed. Then the efficient score function ~lθ∈{L02(P0)}p for θ in the full model P at P0 is ~lθ=˙lθ−Π0(˙lθ∣˙PS+˙Ph), where Π0(l∣W) denotes the orthogonal projection of l onto the linear span of W [1].

For right-censored ~T, we assume Θ is a compact set in Rp, and that θ0 belongs in the interior of Θ. For fixed but arbitrary θ, we define our semiparametric model in terms of the distribution of U(θ)=e−θ′~Z~T=e−(θ−θ0)′~Z~U and the corresponding censored variable Uc(θ)=e−θ′~Z~C. The conditional density of U(θ) given ~Z=z is thus

while the conditional hazard is

Given ~Z the density of U(θ) is monotone decreasing. We now state our assumptions:

The last assumption is needed to ensure that the density of U(θ) has finite Fisher information about θ. The next theorem gives that the efficient score equals that from the naive efficient estimator.

the tangent space ˙PS for S is {˙lSb:b∈L02(S)} where the score operator ˙lS for S is given by

The likelihood for one observation (Ui∧Uci,δi,~Zi) is given by

Taking log and differentiating with respect to θ, we obtain the ordinary score for θ at θ=θ0,

The expression in 2.3 for the ordinary score function for θ can be derived by noting that the quantity in brackets on the right hand side of the above expression is a stochastic integral with respect to the counting-process martingale in 2.2 [1], using proposition A.3.6 in [1].

The second equality above is obtained by using the result that if Yi=∫fidM,i=1,2, then

Thus the projection of ˙lθ on ˙Ps is given by

Now for finding ˙Ph for h∈H′, we consider the one-parameter path η↦hη=(1+ηk)h, where k∈L02(h). The score operator for h is given by

Now replacing z with ~Z and subtracting 2.6 and 2.7 from 2.3 yields the efficient score given in 2.5. The accelerated failure time model for ~T given ~Z is equivalent to the log-linear model Y=log(~T)=−θ′~Z+ϵ, where ϵ has hazard function

and λ~T(u) is the baseline hazard for ~T. In the current setting,

This model is the same as the linear regression model for

Y but with a sign change on θ. The efficient score for the linear regression model under right-censoring is given in Expression (27) on Page 149 of [1] and has the same form as 2.5, except for changes in parameter and variable notation. Specifically, the function Rϕ(u) in 2.5 equals the negative of Rψ(t)=−˙λ(t)/λ(t) defined in Expression (23) of [1], after replacing t with log(u), where the negative is due to the sign change. To see this, note that

and the efficient information becomes

Before presenting Lemma 2.1, we provide a few needed definitions. Let Q be the model consisting of densities on R+ of the form Sg(u)/∫∞0Sg(v)dv, where g∈G; and let ˙QS and ˙Gg be the respective tangent sets for Q and G at S and at g, where g satisfies Sg=S. Lemma 2.1 establishes that ˙QS=L02(S), which is needed in the proof of Theorem 2.1 to identify ˙PS, a key technical step. We will be using score operators which allow us to construct scores for a model of interest from scores for a simpler model [see, e.g., Chapter 18 of 12].

If AS is the score operator mapping tangents in ˙Gg to ˙QS, then AS˙Gg is dense in the maximal tangent set L02(S) for QS, i.e., ˙QS=L02(S).

Let g be the density on R+ corresponding to S. Consider the following parametric path through g:

Thus, the tangent set ˙QS (which consists of scores with respect to the one parameter models pgη) is given by the operator

as n→∞ by previous arguments combined with some analysis. Since c was an arbitrary choice for which S(c)>0, we obtain that b0=0 S-almost surely, and the desired conclusion follows. ∎

A similar result may be obtained for length-biased data by replacing in the proof of Theorem 2.1 S(u)/∫S(u)d(u) with ~g=ug(u)/∫S(u)d(u), where, as before, g is the density generating S. This yields the following result:

Using the same notation as Theorem 2.1 and under the same conditions, the efficient score for θ at θ=θ0 for length-biased data is

Here, the actual form of gU(θ)(Ui)=e(θ−θ0)′~Zi~g(e(θ−θ0)′~ZiUi) is different from Theorem 2.1. Thus we need to replace PS with P~g, where the map g↦~g is as implicitly defined above just before the statement of Theorem 2.2. Specifically, this is the new model for g holding θ and h fixed at their true values. The other models and submodels are the same as for Theorem 2.1 except that S and S0 are replaced by ~g and ~g0. Taking log of l(θ) and differentiating with respect to θ we obtain ˙lθ0=~Zi[δiϕ(Ui)+(1−δi)E{ϕ(U(θ0))∣U(θ0)>Uci}]+(~Zi−E~Z) as the ordinary score for θ at θ=θ0. The quantity in brackets on the right hand side is a stochastic integral with respect to the counting-process martingale in (2.14) and is thus also a martingale. Using this, we can obtain the ordinary score