We derive consistency and asymptotic normality results for quasi-maximum likelihood methods for drift parameters of ergodic stochastic processes observed in discrete time in an underlying continuous-time setting. The special feature of our analysis is that the stochastic integral part is unobserved and non-parametric. Additionally, the drift may depend on the (unknown and unobserved) stochastic integrand. Our results hold for ergodic semi-parametric diffusions and backward SDEs. Simulation studies confirm that the methods proposed yield good convergence results. 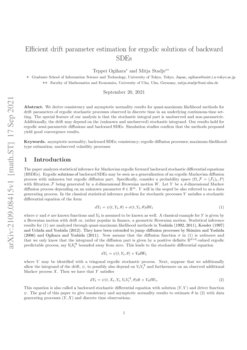 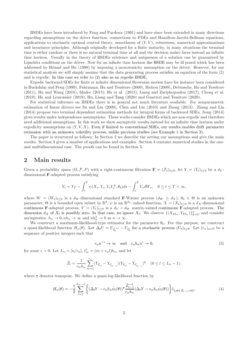 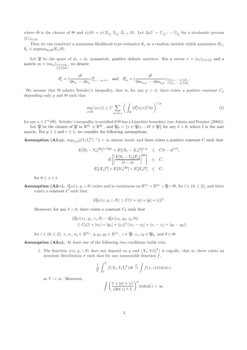 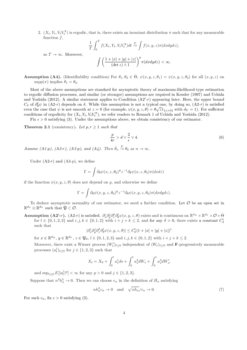 The notion of drift refers to the phenomenon that the distribution, whic...
Fabian Hinder, et al. ∙

Methods to Deal with Unknown Populational Minima during Parameter Inference

There is a myriad of phenomena that are better modelled with semi-infini...
Matheus Henrique Junqueira Saldanha, et al. ∙

Adaptive estimation for small diffusion processes based on sampled data

Consider the problem of estimating a weighted average of the means of n ...
Eitan Greenshtein, et al. ∙

backward SDEs may be seen as a generalization of an ergodic Markovian diffusion process with unknown but ergodic diffusion part. Specifically, consider a probability space

(Ω,F=(Ft)t,P) with filtration F being generated by a d-dimensional Brownian motion W. Let Y be a d-dimensional Markov diffusion process depending on an unknown parameter θ∈Rm. Y will in the sequel be also referred to as a data generating process. In the classical statistical inference problem for stochastic processes Y satisfies a stochastic differential equation of the form

where ψ and σ are known functions and Y0 is assumed to be known as well. A classical example for Y is given by a Brownian motion with drift or, rather popular in finance, a geometric Brownian motion. Statistical inference results for (1) are analyzed through quasi-maximum likelihood methods in Yoshida (1992, 2011), Kessler (1997) and Uchida and Yoshida (2012). They have been extended to jump–diffusion processes by Shimizu and Yoshida (2006) and Ogihara and Yoshida (2011). Now assume that the diffusion function σ in (1) is unknown and that we only know that the integrand of the diffusion part is given by a positive definite Rd×d-valued ergodic predictable process, say VtV⊺t bounded away from zero. This leads to the stochastic differential equation

where V may be identified with a triagonal ergodic stochastic process. Next, suppose that we additionally allow the integrand of the drift, ψ, to possibly also depend on VtV⊺t and furthermore on an observed additional Markov process X. Then we have that Y satisfies

This equation is also called a backward stochastic differential equation with solution (Y,V) and driver function ψ. The goal of this paper to give consistency and asymptotic normality results to estimate θ in (2) with data generating processes (Y,X) and discrete time observations.

BSDEs have been introduced by Peng and Pardoux (1991) and have since been extended in many directions regarding assumptions on the driver function, connections to PDEs and Hamilton-Jacobi-Bellman equations, applications to stochastic optimal control theory, smoothness of (Y,V), robustness, numerical approximations and invariance principles. Although originally developed for a finite maturity, in many situations the terminal time is either random or there is no natural terminal time at all and the decision maker faces instead an infinite time horizon. Usually in the theory of BSDEs existence and uniqueness of a solution can be guaranteed by Lipschitz conditions on the driver. Now for an infinite time horizon the BSDE may be ill posed which has been addressed by Briand and Hu (1998) by imposing a monotonicity assumption on the driver. However, for our statistical analysis we will simply assume that the data generating process satisfies an equation of the form (2) and is ergodic. In this case we refer to (2) also as an ergodic BSDE.

For statistical inference on BSDEs there is in general not much literature available. For nonparametric estimation of linear drivers see Su and Lin (2009), Chen and Lin (2010) and Zhang (2013). Zhang and Lin (2014) propose two terminal dependent estimation methods for integral forms of backward SDEs. Song (2014) gives results under independence assumptions. These works consider BSDEs which are non-ergodic and therefore need additional assumptions. In this work we show asymptotic results instead for an infinite time horizon under ergodicity assumptions on (Y,V,X). Even if limited to conventional SDEs, our results enables drift parameter estimaion with an unknown volatility process, unlike previous studies (see Example 1 in Section 3).

The paper is structured as follows: In Section 2 we describe the setting our assumptions and give the main results. Section 3 gives a number of applications and examples. Section 4 contains numerical studies in the one- and multidimensional case. The proofs can be found in Section 5.

We construct a maximum-likelihood-type estimator for the parameter θ0. For this purpose, we construct a quasi-likelihood function Hn(θ). Let ΔlU=Utl+10−Utl0 for a stochastic process (Ut)t≥0. Let (cn)n∈N be a sequence of positive integers such that

where ⊺ denotes transpose. We define a quasi-log-likelihood function by

Then we can construct a maximum-likelihood-type estimator ^θn

as a random variable which maximizes

We assume that Θ admits Sobolev’s inequality, that is, for any p>d, there exists a positive constant Cp depending only p and Θ such that

for any u∈C1(Θ). Sobelev’s inequality is satisfied if Θ has a Lipschitz boundary (see Adams and Founier (2003)).

Moreover, for any δ>0, there exists a constant Cδ such that

At least one of the following two conditions holds true.

Most of the above assumptions are standard for asymptotic theory of maximum-likelihood-type estimation to ergodic diffusion processes, and similar (or stronger) assumptions are required in Kessler (1997) and Uchida and Yoshida (2012). A similar statement applies to Condition (A2′-r) appearing later. Here, the upper bound Cδ of ∂lθψ in (A2-r) depends on δ. While this assumption is not a typical one, by doing so, (A2-r) is satisfied even the case that ψ is not smooth at z=0 (for example, ψ(x,y,z,θ)=θ√z1{z>0} with dY=1). For sufficient conditions of ergodicity for (Xt,Yt,VtV⊺t), we refer readers to Remark 1 of Uchida and Yoshida (2012).

Fix ϵ>0 satisfying (3). Under the assumptions above, we obtain consistency of our estimator.

if the function ψ(x,y,z,θ) does not depend on y, and otherwise we define

To deduce asymptotic normality of our estimator, we need a further condition. Let O be an open set in RdY⊗RdY such that ¯P⊂O.

Suppose that n3h5n→0. Then we can choose cn in the definition of Hn satisfying

The condition n3h5n→0 is stronger than the ones in previous works (for instance nh2n→0 in Yoshida (2011), and nhpn→0 for p≥2 in Uchida and Yoshida (2012) and Kessler (1997)). Unlike previous studies, we need to construct an estimator ^Zl of Zt whose structure is not specified. For this purpose, (7) and consequently n3h5n→0 is required.

If Vt is a diffusion process with SDE-coefficients not depending on θ, ^θn is asymptotically efficient under the assumptions of Gobet (2002) because Γ−1

In the sequel, we will consider different possibilities for our sequences converging to zero or to infinity. In particular, consider cn=n0.05k,k=1,2,…,l−1.

4.1 Simulation Results for the Vasicek model

Suppose that Xt evolves according to the Vasicek model, that is, dXt=a(b−Xt)dt+σdWt where Wt is the standard Brownian motion, with parameters a=2,b=0.3 and σ=0.025. The initial value X0 is set as 0.3. Let us estimate θ in the equation

In the following hn is set to be n−0.05l and cn to be n0.05k. We consider integers l and k where to satisfy the conditions of Theorem 2.1 and Theorem 2.2 13≤l≤19 and max(1,10−l2)≤k≤2l−20. To look for the pair of (l,k) which best estimates θ, we run simulations for each combination of (l,k) and calculate the average of the errors as the sum of differences between ^θn and θ in percentage for the n’s simulated, which means

The results are summarized in the following tables.

From the tables it can be seen that the choices for l and k strongly matter. The pairs with l=13 gives the smallest error and estimates θ most accurately under both sets of n’s.When simulations are repeated, any of the three pairs could result in the smallest error. Overall, for the same k, the smaller l is, the better the estimation for θ is.

Below, Figure 1 shows an analysis for the Vasicek model where k and l are chosen to be 6 and 13 respectively, with θ0=10. The number of simulation times n is set as

For each n, we repeat the process by 500 times and calculate the Mean Error of the estimators ^θ’s.

The number of simulation times n is set as

For each n, we repeat the process by 500 times and calculate the Mean-Absolute-Error (MAE) of the estimators ^θ’s. Figure 2 shows the result.

In this section, we prove the results in Section 2. In Section 5.1, we introduce two functions ˇHn,δ and ~Hn,δ which are approximation of the quasi-log-likelihood Hn. The function ˇHn,δ is introduced to control the event that either Zt or ^Zl is close to degenerate for some t or l, and is equal to Hn except on that event. The function ~Hn,δ is obtained by replacing the estimator ^Zl−1 in ˇHn,δ with Ztl−10. In Section 5.2, we will show that the difference of ∂lθˇHn,δ and ∂lθ~Hn,δ can be asymptotically ignored, and we consequently obtain consistency of ^θn. To show Theorem 2.2, we need an accurate estimate for the difference of ∂θˇHn,δ(θ0) and ∂θ~Hn,δ(θ0), which is given in Proposition 5.1 of Section 5.3. Together with asymptotic estimate Lemma 5.3 of ∂lθ~Hn,δ, we obtain then the desired results.

For a vector v and a matrix A, [v]i and [A]ij denote (i,j) element of a matrix A and i-th element of v, respectively. For q>0 and a sequence pn of positive numbers, let us denote by {¯Rn,q(pn)}n∈N and {R––n,q(pn)}n∈N sequences of random variables (which may also depend on l and θ) satisfying

Let Zt=VtV⊺t. We first introduce a family of stopping times controlling the degeneracy of Zt and ^Zl. For any δ>0, let

When δ is sufficiently small and n sufficiently large, ˇHn corresponds to Hn with high probability (see (16)). ~Hn is an approximation of ˇHn which is useful when we deduce the asymptotic behavior.

and therefore, we have

Equation (16) implies that the asymptotic behavior of Hn is essentially the same as more tractable ˇHn,δ for sufficiently small δ>0. We further show that ˇHn,δ is asymptotically equivalent to ~Hn,δ in Lemma 5.1 of the following section.

By the definitions of ˇHn and ~Hn, we can decompose the difference as