We propose a data augmentation scheme for improving the rate of convergence of the EM algorithm in estimating Gaussian state space models. The scheme is based on a linear transformation of the latent states, and two working parameters are introduced for simultaneous rescaling and re-centering. A variable portion of the mean and scale are thus being moved into the missing data. We derive optimal values of the working parameters (which maximize the speed of the EM algorithm) by minimizing the fraction of missing information. We also study the large sample properties of the working parameters and their dependence on the autocorrelation and signal-to-noise ratio. We show that instant convergence is achievable when the mean is the only unknown parameter and this result is extended to Gibbs samplers and variational Bayes algorithms. 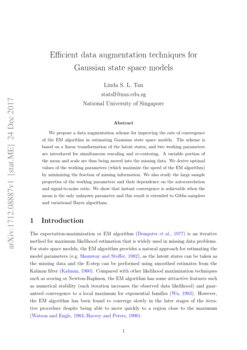 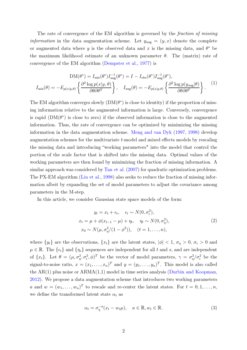 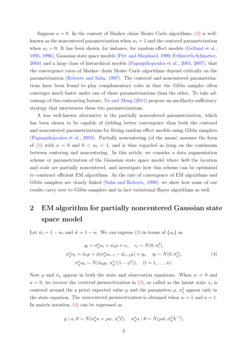 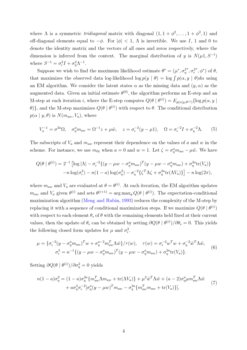 The expectation-maximization or EM algorithm

(Dempster et al., 1977) is an iterative method for maximum likelihood estimation that is widely used in missing data problems. For state space models, the EM algorithm provides a natural approach for estimating the model parameters (e.g. Shumway and Stoffer, 1982)

, as the latent states can be taken as the missing data and the E-step can be performed using smoothed estimates from the Kalman filter

(Kalman, 1960). Compared with other likelihood maximization techniques such as scoring or Newton-Raphson, the EM algorithm has some attractive features such as numerical stability (each iteration increases the observed data likelihood) and guaranteed convergence to a local maximum for exponential families (Wu, 1983). However, the EM algorithm has been found to converge slowly in the later stages of the iterative procedure despite being able to move quickly to a region close to the maximum (Watson and Engle, 1983; Harvey and Peters, 1990).

The rate of convergence of the EM algorithm is governed by the fraction of missing information in the data augmentation scheme. Let yaug=(y,x) denote the complete or augmented data where y is the observed data and x is the missing data, and θ∗ be the maximum likelihood estimate of an unknown parameter θ. The (matrix) rate of convergence of the EM algorithm (Dempster et al., 1977) is

In this article, we consider Gaussian state space models of the form:

be the vector of model parameters,

γ=σ2η/σ2ϵ be the signal-to-noise ratio, x=(x1,…,xn)T and y=(y1,…,yn)T. This model is also called the AR(1) plus noise or ARMA(1,1) model in time series analysis (Durbin and Koopman, 2012). We propose a data augmentation scheme that introduces two working parameters a and w=(w1,…,wn)T to rescale and re-center the latent states. For t=0,1,…,n, we define the transformed latent state αt as

. In the context of Markov chain Monte Carlo algorithms, (

A less well-known alternative is the partially noncentered parametrization, which has been shown to be capable of yielding better convergence than both the centered and noncentered parametrizations for fitting random effect models using Gibbs samplers (Papaspiliopoulos et al., 2003). Partially noncentering (of the mean) assumes the form of (3) with a=0 and 0<wt<1, and is thus regarded as lying on the continuum between centering and noncentering. In this article, we consider a data augmentation scheme or parametrization of the Gaussian state space model where both the location and scale are partially noncentered, and investigate how this scheme can be optimized to construct efficient EM algorithms. As the rate of convergence of EM algorithms and Gibbs samplers are closely linked (Sahu and Roberts, 1999), we show how some of our results carry over to Gibbs samplers and in fact variational Bayes algorithms as well.

Now μ and ση appear in both the state and observation equations. When w=0 and a=0, we recover the centered parametrization in (2), so called as the latent state xt is centered around the a priori expected value μ and the parameters μ, σ2η appear only in the state equation. The noncentered parametrization is obtained when w=1 and a=1. In matrix notation, (4) can be expressed as

, 1 and 0 to denote the identity matrix and the vectors of all ones and zeros respectively, where the dimension is inferred from the context. The marginal distribution of

Suppose we wish to find the maximum likelihood estimate θ∗=(μ∗,σ2η∗,σ2ϵ∗,ϕ∗) of θ, that maximizes the observed data log-likelihood logp(y∣θ)=log∫p(α,y∣θ)dα using an EM algorithm. We consider the latent states α as the missing data and (y,α) as the augmented data. Given an initial estimate θ(0), the algorithm performs an E-step and an M-step at each iteration i, where the E-step computes Q(θ∣θ(i))=Ep(α∣y,θ(i)){logp(α,y∣θ)}, and the M-step maximizes Q(θ∣θ(i)) with respect to θ. The conditional distribution p(α∣y,θ) is N(maw,Va), where

The subscripts of Va and maw represent their dependence on the values of a and w in the scheme. For instance, we use m01 when a=0 and w=1. Let ζ=σaηmaw−μ~w. We have

where maw and Va are evaluated at θ=θ(i). At each iteration, the EM algorithm updates maw and Va given θ(i) and sets θ(i+1)=argmaxθQ(θ∣θ(i)). The expectation-conditional maximization algorithm (Meng and Rubin, 1993) reduces the complexity of the M-step by replacing it with a sequence of conditional maximization steps. If we maximize Q(θ∣θ(i)) with respect to each element θs of θ with the remaining elements held fixed at their current values, then the update of θs can be obtained by setting ∂Q(θ∣θ(i))/∂θs=0. This yields the following closed form updates for μ and σ2ϵ.

and closed form updates are available only in the following special cases:

which can be solved using iterative methods.

Here we are interested in finding the values of a and w that optimize the rate of convergence of the EM algorithm. From (1), since Iobs(θ∗) depends only on the observed data and is independent of the parametrization, it is sufficient to minimize Iaug(θ∗) with respect to a and w. We use Iθi,θj to denote the (i,j) element in Iaug(θ∗). We first consider the cases where only the location μ or the scale σ2η is unknown followed by the case where all the parameters are unknown,

Suppose ϕ,σ2ϵ,σ2η are known and μ is the only unknown parameter. The EM algorithm for this case, hereby called Algorithm 1, alternately updates maw and μ as in (5) and (6).

As u1=1 from (10), Theorem 2 implies that wopt can be computed using only elements from the first row of Q−1. In addition, wopt is symmetric since woptt=woptn−t+1 for each t. It is clear that the value of wopt depends on ϕ, and on σ2η and σ2ϵ only through the signal-to-noise ratio γ. Corollary 1 presents bounds for wopt which are tight when ϕ=0.

If 0<ϕ<1, each element of wopt decreases strictly as the signal-to-noise ratio γ increases and as ϕ increases. As ϕ approaches 1, wopt approaches the zero vector.

from Property 2. It is clear from (11) that as ϕ approaches 1, wopt approaches the zero vector. ∎

For random effects models (Gelfand et al., 1995; Papaspiliopoulos et al., 2003), the partial noncentering parameter for location always lies between 0 and 1. This is also true for the Gaussian state space model when 0<ϕ<1. However, when −1<ϕ<0, woptt is positive but not necessarily bounded above by one as shown in Fig. 1. From Corollary 2, the centered parametrization (w=0) is increasingly preferred as ϕ and γ increase when 0<ϕ<1. However, when −1<ϕ<0, Fig. 1 shows that woptt may not be strictly decreasing with either ϕ or γ.

Next, suppose ϕ,σ2ϵ,μ are known and σ2η is the only unknown parameter. The EM algorithm for this case (hereby called Algorithm 2), alternately updates maw and Va at the E-step and σ2η at the M-step as given in (5) and (7) respectively.

The rate of convergence of Algorithm 2 can be optimized by minimizing Iσ2η,σ2η with respect to a and w. We can show that Iσ2η,σ2η=(2σ4η)−1I, where

Solving the two equations simultaneously, we obtain the results in (12). The Hessian of I can be verified to be positive definite at (aopt,wopt). Hence I is minimized at (aopt,wopt). ∎

From Theorem 3, aopt and wopt depend not only on the unknown σ∗η, but also on the observed data y. Thus even if the true parameter is known, aopt and wopt will still vary across datasets generated from model (4) due to sampling variability. We recommend updating aopt and wopt at each iteration in Algorithm 2 based on the latest update of σ2η.

If μ=0, aopt is clearly bounded in (0,1]. If μ≠0, aopt is always bounded above by 1 but may be negative, especially when n is small and the signal-to-noise ratio is large. To investigate the dependence of aopt on ϕ and the signal-to-noise ratio γ, we compute aopt for datasets simulated under a variety of parameter settings. We set μ=1, σ2ϵ=0.1, σ2η∈{0.01,0.1,1}, ϕ∈{−0.99,−0.98,…,0.99}, n∈{50,500,5000} and generate 1000 datasets in each setting. Fig. 2 shows that the mean of aopt seems to decrease as the signal-to-noise ratio increases, is symmetric about ϕ=0, and varies with ϕ in the form of an (inverted) U-shaped curve. Support for these observations is provided by Theorem 4 below, which derives an estimate ^aopt of aopt for large n. This estimate (shown in Fig. 2) improves as n increases and is almost indistinguishable from aopt for n greater than 500. Proof of Theorem 4 requires the trace of Q−1 and Q−2 which are stated in Property 3 (see Tan2017).

If μ≠0, aopt converges to ^aopt in quadratic mean as n→∞, where

The approximation in Theorem 4 lends insight on how aopt varies with γ and ϕ. For instance, ^aopt is symmetric about ϕ=0. It is also easy to verify that ∂^aopt/∂γ is always negative and hence ^aopt decreases strictly with the signal-to-noise ratio. From Corollary 3, aopt is almost surely to lie in the interval (0,1) when n is large. On the other hand, woptt in (12) is not bounded in [0,1] unlike in Section 3. Results from simulations (see Fig. 3) show that as n→∞, E(woptt) is close to one under different conditions but there is greater variability when the signal-to-noise is large. In Theorem 5, we show that E(woptt)→1 approximately as n→∞

by taking the moments of a second order Taylor’s approximation. However, Fig

shows that the 5th and 95th quantiles of

wopt1 do not approach one even for large n, especially when |ϕ| is close to one and/or signal-to-noise ratio is large. Thus var(woptt) does not seem to vanish as n→∞.