We propose a DTCWT ScatterNet Convolutional Neural Network (DTSCNN) formed by replacing the first few layers of a CNN network with a parametric log based DTCWT ScatterNet. The ScatterNet extracts edge based invariant representations that are used by the later layers of the CNN to learn high-level features. This improves the training of the network as the later layers can learn more complex patterns from the start of learning because the edge representations are already present. The efficient learning of the DTSCNN network is demonstrated on CIFAR-10 and Caltech-101 datasets. The generic nature of the ScatterNet front-end is shown by an equivalent performance to pre-trained CNN front-ends. A comparison with the state-of-the-art on CIFAR-10 and Caltech-101 datasets is also presented. 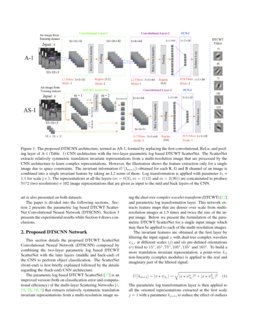 tasks in computer vision and speech applications over the past few years. However, these models produce state-of-the-art results only for large datasets and tend to overfit

[17] on many other applications such as the analysis of hyperspectral images [22], stock market prediction [11], medical data analysis [21] etc due to the small training datasets.

Two primary approaches have been utilized to train DCNNs effectively for applications with small training datasets: (i) Data augmentation and synthetic data generation, and (ii) Transfer Learning. Training CNNs on synthetic datasets may not learn potentially useful patterns of real data as often the feature distribution of synthetic data generated shifts away from the real data

[33]. On the other hand, transfer Learning aims to extract the knowledge from one or more source tasks and applies the knowledge to a target task. The weights of the CNN are initialized with those from a network trained for related tasks before fine-tuning them using the target dataset [23]. These Networks have resulted in excellent embeddings, which generalize well to new categories [24].

and a parametric log transformation layer. These extracted features, that incorporate edge information similar to the first layers of the networks trained on ImageNet

[31], [10], are used by the middle and later CNN layers to learn high-level features. This helps the proposed DTSCNN architecture to converge faster as it has fewer filter weights to learn compared to its corresponding CNN architecture (Section 2). In addition, the CNN layers can learn more complex patterns from the start of learning as it is not necessary to wait for the first layer to learn edges as they are already extracted by the ScatterNet.

The performance of the DTSCNN architecture is evaluated on (i) Classification error and, (ii) Computational efficiency and the rate of learning with over 50 experiments performed with 14 CNN architectures. The efficient learning of the DSTCNN architectures is demonstrated by their ability to train faster and with lower classification error on small as well as large training datasets, generated from the CIFAR-10 dataset. The DTCWT ScatterNet front-end is also shown to give similar performance to the first convolutional pre-trained layers of CNNs which capture problem specific filter representations, on Caltech-101 as well as CIFAR-10 datasets. A comparison with the state-of-the-art is also presented on both datasets.

This section details the proposed DTCWT ScatterNet Convolutional Neural Network (DTSCNN) composed by combining the two-layer parametric log based DTCWT ScatterNet with the later layers (middle and back-end) of the CNN to perform object classification. The ScatterNet (front-end) is first briefly explained followed by the details regarding the (back-end) CNN architecture.

The parametric log based DTCWT ScatterNet [27] is an improved version (both on classification error and computational efficiency) of the multi-layer Scattering Networks [4, 19, 26, 18, 5] that extracts relatively symmetric translation invariant representations from a multi-resolution image using the dual-tree complex wavelet transform (DTCWT) [12] and parametric log transformation layer. This network extracts feature maps that are denser over scale from multi-resolution images at 1.5 times and twice the size of the input image. Below we present the formulation of the parametric DTCWT ScatterNet for a single input image which may then be applied to each of the multi-resolution images.

The invariant features are obtained at the first layer by filtering the input signal x with dual-tree complex wavelets ψj,r at different scales (j) and six pre-defined orientations (r) fixed to 15∘,45∘,75∘,105∘,135∘ and 165∘. To build a more translation invariant representation, a point-wise L2 non-linearity (complex modulus) is applied to the real and imaginary part of the filtered signal:

, to reduce the effect of outliers by introducing relative symmetry of pdf, as shown below:

Next, a local average is computed on the envelope |U1[λm=1]| that aggregates the coefficients to build the desired translation-invariant representation:

The high frequency components lost due to smoothing are retrieved by cascaded wavelet filtering performed at the second layer. The retrieved components are again not translation invariant so invariance is achieved by first applying the L2 non-linearity of eq(2) to obtain the regular envelope:

and then a local-smoothing operator is applied to the regular envelope (U2[λm=1,λm=2]) to obtain the desired second layer (m=2) coefficients with improved invariance:

The scattering coefficients for each layer are:

(WResNet) (A-7). The DTSCNN architectures (AS-5, AS-6, AS-7) for the standard architectures (NIN (A-5), VGG (A-6), WResNet (A-7)) are again obtained by removing the first convolutional layer of each network and replacing it with the ScatterNet. The architectures are trained in an end-to-end manner by Stochastic Gradient Descent with softmax loss until convergence.

The performance of the DTSCNN architecture is demonstrated on CIFAR-10 and Caltech-101 datasets with over 50 experiments performed with 14 CNN architectures of increasing depth on (i) Classification error and, (ii) Computational efficiency and the rate of learning. The generic nature of the features extracted by the DTCWT ScatterNet is shown by an equivalent performance to the pre-trained CNN front-ends. The details of the datasets and the results are presented below.

224 labeled into 101 object categories and a background class. The classification error on this dataset is measured on 3 randomly generated splits of training and test data, so that each split contains 30 training images per class, and up to 50 test images per class. In each split, 20% of training images were used as a validation set for hyper-parameter selection. Transfer learning is used to initialize the filter weights for the networks that are used to classify this dataset because the number of training samples are not sufficient to train the networks from a random start.

3.2 Evaluation and Comparison on Classification Error

3.3 Analysis on Computational Efficiency and Learning

as well as the standard (A-5 to A-7) deep learning architectures for a range of small and large training dataset sizes.

The DTSCNN architectures have a higher rate of learning or faster converge than the original CNN architectures because the numbers of filter weights required to be learned are smaller but also because the ScatterNet extracts edge representations that allow the later CNN layers to learn high-level features from the first epoch onwards. The faster convergence is shown for both the derived (A-1 to A-4) and standard deep architectures (A-5 to A-7) as shown in Fig. 2 and Fig. 3, respectively. An architecture is considered to have converged at a specific epoch when the error value for the subsequent epochs changes within 2% of the error value at that specific epoch. The convergence is marked on the epoch axis using an orange dotted line for the DTSCNN architecture and a purple dotted line for the CNN architectures. As observed from Fig. 2 and Fig. 3, the orange line has a lower epoch value as compared to the purple line indicating the faster convergence.

The time required for training the original and their corresponding DSTCNN architectures is presented for a small (5000) and large training dataset (50000) for both the derived (A-1 to A-4) and standard deep architectures (A-5 to A-6), as shown in Fig. 2 and Fig. 3, respectively. The time for convergence is again measured to within 2% of the final converged error value. As observed from both figures, the training time is higher for the original networks than the DTSCNN networks because of the reasons mentioned above.

The networks are trained using the MatConvNet [29] package on a server with a NVIDIA GeForce 7800 GTX card.

The classification performance of the DTCWT ScatterNet front-end is compared with the first pre-trained convolutional layer for the Network in Network (NIN) [16] and the Visual Geometry Group convolutional (VGG) [25] architectures, on Caltech-101 and CIFAR-10 datasets. The filter weights for both the NIN and the VGG networks are initialized with the weights obtained from their models pre-trained on ImageNet (found here [1]

). The first layers for both the architectures are fixed to be the ScatterNet and the pre-trained convolutional layer, while the filter weights only in later layers are fine-tuned using the training images of CIFAR-10 and Caltech-101. The ScatterNet front-end gives similar performance to the pre-trained first convolutional layer on classification error for both datasets as shown in Table. 4. For this experiment, dropout, batch normalization and data augmentation with crops and horizontal flips were utilized

[2]. The use of the NIN network is preferred as it gives similar performance to the VGG network while being 4 times faster.

3.5 Comparison with the state-of-the-art

The DTCWT scattering front-end is mathematically designed to deal with all edge orientations equally and with 2 or more scales, as required. The generic nature of the DTCWT scattering front-end is shown by its similar classification performance to the front-end of learned networks, on two different datasets. The generic features are likely to give it wide applicability to both small and large image datasets as it gives lower (small dataset) or similar classification error (large dataset), with faster rates of convergence.