A simple yet efficient computational algorithm for computing the continuous optimal experimental design for linear models is proposed. An alternative proof the monotonic convergence for D-optimal criterion on continuous design spaces are provided. We further show that the proposed algorithm converges to the D-optimal design. We also provide an algorithm for the A-optimality and conjecture that the algorithm convergence monotonically on continuous design spaces. Different numerical examples are used to demonstrated the usefulness and performance of the proposed algorithms. 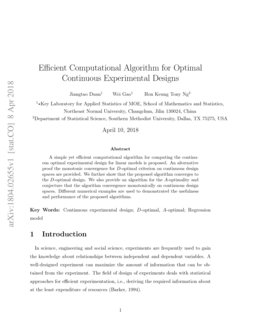 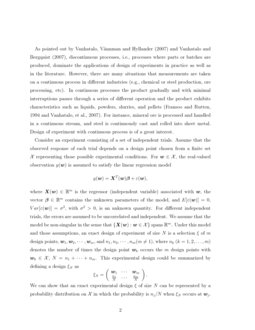 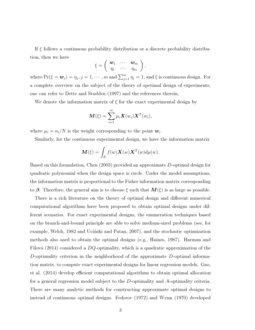 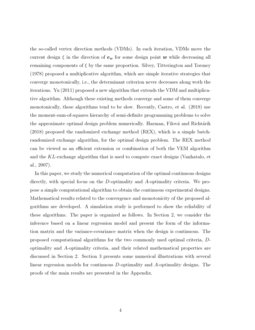 In science, engineering and social science, experiments are frequently used to gain the knowledge about relationships between independent and dependent variables. A well-designed experiment can maximize the amount of information that can be obtained from the experiment. The field of design of experiments deals with statistical approaches for efficient experimentation, i.e., deriving the required information about at the least expenditure of resources (Barker, 1994).

As pointed out by Vanhatalo, Vännman and Hyllander (2007) and Vanhatalo and Bergquist (2007), discontinuous processes, i.e., processes where parts or batches are produced, dominate the applications of design of experiments in practice as well as in the literature. However, there are many situations that measurements are taken on a continuous process in different industries (e.g., chemical or steel production, ore processing, etc). In continuous processes the product gradually and with minimal interruptions passes through a series of different operation and the product exhibits characteristics such as liquids, powders, slurries, and pellets (Fransoo and Rutten, 1994 and Vanhatalo, et al., 2007). For instance, mineral ore is processed and handled in a continuous stream, and steel is continuously cast and rolled into sheet metal. Design of experiment with continuous process is of a great interest.

Consider an experiment consisting of a set of independent trials. Assume that the observed response of each trial depends on a design point chosen from a finite set X representing those possible experimental conditions. For w∈X, the real-valued observation y(w)

is assumed to satisfy the linear regression model

β∈Rm contains the unknown parameters of the model, and E[ε(w)]=0, Var[ε(w)]=σ2, with σ2>0, is an unknown quantity. For different independent trials, the errors are assumed to be uncorrelated and independent. We assume that the model be non-singular in the sense that {X(w):w∈X} spans Rm. Under this model and those assumptions, an exact design of experiment of size N is a selection ξ of m design points, w1,w2,⋯,wm, and n1,n2,⋯,nm(m≠1), where nk (k=1,2,…,m) denotes the number of times the design point wk occurs the m design points with wk∈X, N=n1+⋯+nm. This experimental design could be summarized by defining a design ξN as

can be represented by a probability distribution on

X in which the probability is nj/N when ξN occurs at wj.

where Pr(ξ=wj)=ηj,j=1,⋯,m and ∑mj=1ηj=1, and ξ is continuous design. For a complete overview on the subject of the theory of opetimal design of experiments, one can refer to Dette and Studden (1997) and the references therein.

where μi=ni/N is the weight corresponding to the point wi.

Similarly, for the continuous experimental design, we have the information matrix

Based on this formulation, Chen (2003) provided an approximate D-optimal design for quadratic polynomial when the design space is circle. Under the model assumptions, the information matrix is proportional to the Fisher information matrix corresponding to β. Therefore, the general aim is to choose ξ such that M(ξ) is as large as possible.

There is a rich literature on the theory of optimal design and different numerical computational algorithms have been proposed to obtain optimal designs under different scenarios. For exact experimental designs, the enumeration techniques based on the branch-and-bound principle are able to solve medium-sized problems (see, for example, Welch, 1982 and Uciński and Patan, 2007), and the stochastic optimization methods also used to obtain the optimal designs (e.g., Haines, 1987). Harman and Filová (2014) considered a DQ-optimality, which is a quadratic approximation of the D-optimality criterion in the neighborhood of the approximate D-optimal information matrix, to compute exact experimental designs for linear regression models. Gao, et al. (2014) develop efficient computational algorithms to obtain optimal allocation for a general regression model subject to the D-optimality and A-optimality criteria. There are many analytic methods for constructing approximate optimal designs to instead of continuous optimal designs. Fedorov (1972) and Wynn (1970) developed the so-called vertex direction methods (VDMs). In each iteration, VDMs move the current design ξ in the direction of ew for some design point w while decreasing all remaining components of ξ

by the same proportion. Silvey, Titterington and Torsney (1978) proposed a multiplicative algorithm, which are simple iterative strategies that converge monotonically, i.e., the determinant criterion never decreases along woth the iterations. Yu (2011) proposed a new algorithm that extends the VDM and multiplicative algorithm. Although these existing methods converge and some of them converge monotonically, these algorithms tend to be slow. Recently, Castro, et al. (2018) use the moment-sum-of-squares hierarchy of semi-definite programming problems to solve the approximate optimal design problem numerically. Harman, Filová and Richtárik (2018) proposed the randomized exchange method (REX), which is a simple batch-randomized exchange algorithm, for the optimal design problem. The REX method can be viewed as an efficient extension or combination of both the VEM algorithm and the

In this paper, we study the numerical computation of the optimal continuous designs directly, with special focus on the D-optimality and A

-optimality criteria. We propose a simple computational algorithm to obtain the continuous experimental designs. Mathematical results related to the convergence and monotonicity of the proposed algorithms are developed. A simulation study is performed to show the reliability of these algorithms. The paper is organized as follows. In Section 2, we consider the inference based on a linear regression model and present the form of the information matrix and the variance-covariance matrix when the design is continuous. The proposed computational algorithms for the two commonly used optimal criteria,

where β is a p-dimensional parameter vector, x(w) is the covariates, E is the continuous design space and ϵ(w) is error terms with mean 0 and variance σ2. When the observations are obtained based on Model (1

), the ordinary least square estimator of

β can be expressed as

The variance of ^β is

We can obtain the following result.

The proof of Theorem 1 is provided in Appendix. Based on Theorem 1, for the D-optimal criterion in (2), the following algorithm is proposed to obtain the optimal f∗(w).

Step D1. Set the initial value of f as

Step D2. Update f in the n-th step as

Lemma 1. Let A(w) be a nonnegative definite matrix function on E , f(w) and g(w) are nonnegative functions on it, and

are positive definite matrices with infinite elements. Then,

Lemma 2. Suppose f(w) and g(w) are density functions defined on E, then

Now, we present the theorem to show the convergence of the proposed algorithm for D-optimality.

Theorem 2. Under the assumption that log|∫Ex(w)xT(w)dw| is bounded, we have

The proof of Theorem 2 is provided in Appendix. The algorithm proposed here is in the general class of the multiplicative algorithms (Silvery, et al., 1978), which shares the simplicity and monotonic convergence property of class of the multiplicative algorithm. One of the most attractive properties of the proposed algorithm is that the convergence rate of the algorithm does not depend on the number of design points N compared to some existing algorithms such as the coordinate-exchange algorithm (Meyer and Nachtsheim, 1995) and the randomized exchange algorithm (Harman and Filová, 2014).

Another optimality criterion considered here is based on the trace of the first-order approximation of the variance-covariance matrix of the MLEs. It is identical to the sum of the diagonal elements of the variance-covariance matrix. The A-optimality criterion provides an overall measure of the average variance of the parameter estimates. The A-optimal design points minimize the objective function defined by A-optimal criterion:

The proof of Theorem 3 is provided in Appendix. Based on Theorem 3, for the A-optimal criteria in (3), the following algorithm is proposed to obtain the optimal design f∗(w).

Step A2. Update f in the n-th step as

Step A3. Repeat Steps A1 and A2 until convergence occurs.

In Settings 1 and 2, we consider the continuous design space E={(w1,w2)T:w21+w22≤1} and polynomial measurements with unknown parameters β∈Rd, where the number of unknown parameters of Settings 1 and 2 are d1=2 and d2=6, respectively. To compute the D-optimal design and the A-optimal design, we apply the algorithms presented in Sections 2.1 and 2.2. We can obtain the positions of the optimal design points. For Settings 1 and 2, Figures 1–4 show that the optimal design points converge to the boundary of a circle and the support also includes the point (0,0) if the model includes the constant term. For Setting 2 (see Figure 3), we integrate the blue region around (0, 0) and get the integral value of 0.162 (≈1/6), and the integral of area of the circle is 0.833 (≈5/6

). Note that 1/6 and 5/6 are the theoretical proportions for the optimal design in Setting 2. In order to verify that the optimal design points have uniform distribution on the ring, we also integrate region with the same arc on the ring and find that these integral values are equal. Similar conclusions can be obtained for

For Setting 3, Figures 5 and 6 show that there are 9 optimal design points in the continuous design space E, and the weights are obtained by integrating around these 9 points. The weights obtained from the randomized exchange algorithm and the proposed algorithm are presented in Tables 3 and 4. From Tables 3 and 4, we can see that the proposed method identified the same optimal design points as the randomized exchange algorithm, and the corresponding weights are close to the theoretical values.

In this paper, we proposed simple yet efficient iterative computational algorithms for obtaining the D-optimal and A-optimal continuous designs for linear models. We also provided an alternate proof of the monotonic convergence of the proposed algorithm for D-optimality and demonstrate that the proposed algorithm converges to the optimal design. Although a theoretical justification for the convergence of the proposed computational algorithm for A-optimality is not available, our computational results support the validity and reliability of the algorithm. These algorithms are programmed under MATLAB R2016a environment and the programs are available from the authors upon request.

Since log(|A|) is convex in A with A being a positive definite matrix, we have

Then, f∗ is the optimal solution for the D-optimal criterion in (2) if and only if

which gives the result stated in the theorem.

From Lemma 1, we have

Thus, we can conclude that

Therefore, under the bounded assumption, the sequence log∣∣∫Ef(n)(w)x(w)xT(w)dw∣∣ is uniformly bounded and increasing, and hence it is convergent.

Using Lemma 1 and Lemma 2, we can obtain

Then, we can conclude that

It is easy to check that tr(A)−1 is concave in A, where A is positive definite matrix. For the sake of simplicity, we make S=∫Ef(w)x(w)xT(w)dw and S∗=∫Ef∗(w)x(w)xT(w)dw. We have

Dette, H. and Studden, W. J., 1997. The theory of canonical moments with applications in statistics, probability, and analysis. Wiley & Sons.

Haines, L. M., 1987. The application of the annealing algorithm to the construction of exact optimal designs for linear-regression models. Technometrics, 29(4), 439–447.

Vanhatalo, E. and Bergquist, B., 2007. Special considerations when planning experiments in a continuous process. Quality Engineering, 19, 155–169.