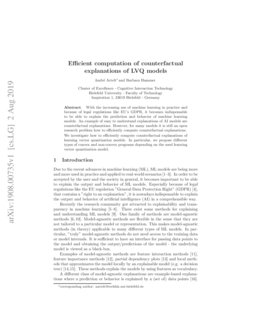 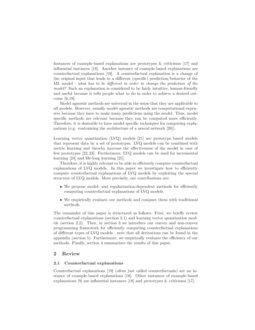 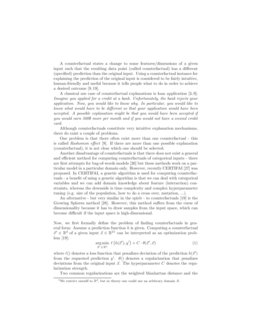 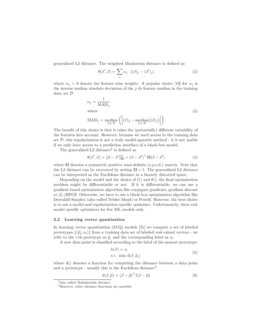 Due to the recent advances in machine learning (ML), ML models are being more and more used in practice and applied to real-world scenarios [1, 2, 3]. In order to be accepted by the user and the society in general, it becomes important to be able to explain the output and behavior of ML models. Especially because of legal regulations like the EU regulation ”General Data Protection Right” (GDPR) [4]

, that contains a ”right to an explanation”, it is nowadays indispensable to explain the output and behavior of artificial intelligence (AI) in a comprehensible way.

and local methods that approximates the model locally by an explainable model (e.g. a decision tree)

[14, 15]. These methods explain the models by using features as vocabulary.

[20]). Learning vector quantization (LVQ) models [21] are prototype based models that represent data by a set of prototypes. LVQ models can be combined with metric learning and thereby increase the effectiveness of the model in case of few prototypes [22, 23]. Furthermore, LVQ models can be used for incremental learning [24] and life-long learning [25].

The remainder of this paper is structured as follows: First, we briefly review counterfactual explanations (section 2.1) and learning vector quantization models (section 2.2). Then, in section 3 we introduce our convex and non-convex programming framework for efficiently computing counterfactual explanations of different types of LVQ models - note that all derivations can be found in the appendix (section 5). Furthermore, we empirically evaluate the efficiency of our methods. Finally, section 4 summarizes the results of this paper.

Although counterfactuals constitute very intuitive explanation mechanisms, there do exist a couple of problems.

Another disadvantage of counterfactuals is that there does not exist a general and efficient method for computing counterfactuals of categorical inputs - there are first attempts for bag-of-words models [26] but these methods work on a particular model in a particular domain only. However, recently CERTIFAI [27]

was proposed. In CERTIFAI, a genetic algorithm is used for computing counterfactuals - a benefit of using a genetic algorithm is that we can deal with categorical variables and we can add domain knowledge about feature (interaction) constraints, whereas the downside is time complexity and complex hyperparameter tuning (e.g. size of the population, how to do a cross over, mutation, …).

Now, we first formally define the problem of finding counterfactuals in general form: Assume a prediction function h is given. Computing a counterfactual →x′∈Rd of a given input →x∈Rd222We restrict ourself to Rd, but in theory one could use an arbitrary domain X. can be interpreted as an optimization problem [19]:

denotes a loss function that penalizes deviation of the prediction

h(→x′) from the requested prediction y′. θ() denotes a regularization that penalizes deviations from the original input →x. The hyperparameter C denotes the regularization strength.

where αj>0 denote the feature wise weights. A popular choice [19] for αj is the inverse median absolute deviation of the j-th feature median in the training data set D:

The benefit of this choice is that it takes the (potentially) different variability of the features into account. However, because we need access to the training data set D, this regularization is not a truly model-agnostic method - it is not usable if we only have access to a prediction interface of a black-box model.

The generalized L2 distance333also called Mahalanobis distance is defined as

Depending on the model and the choice of ℓ() and θ(), the final optimization problem might be differentiable or not. If it is differentiable, we can use a gradient-based optimization algorithm like conjugate gradients, gradient descent or (L-)BFGS. Otherwise, we have to use a black-box optimization algorithm like Downhill-Simplex (also called Nelder-Mead) or Powell. However, the best choice is to use a model and regularization specific optimizer. Unfortunately, there exit model specific optimizers for few ML models only.

In learning vector quantization (LVQ) models [21] we compute a set of labeled prototypes {(p→i,oi)} from a training data set of labeled real-valued vectors - we refer to the i-th prototype as p→i and the corresponding label as oi.

A new data point is classified according to the label of the nearest prototype:

where d() denotes a function for computing the distance between a data point and a prototype - usually this is the Euclidean distance444However, other distance functions are possible.:

There exist LVQ models like GMLVQ, LGMLVQ [22], MRSLVQ and LMRSLVQ [23] that learn a custom (class or prototype specific) distance matrix Ωp that is used instead of the identity I when computing the distance between a data point and a prototype. This gives rise to the generalized L2 distance Eq. 4:

Because Ωp must be a s.p.s.d. matrix, instead of learning Ωp directly, these LVQ variants learn a matrix ~Ωp and compute the final distance matrix as:

By this, we can guarantee that the matrix Ωp is s.p.s.d., whereas the model only has to learn an arbitrary matrix ~Ωp - which is much easier than making some restriction on the definiteness. Training usually takes place by optimizing suitable cost functions as regards prototype locations and metric parameters. For counterfactual reasoning, the specific training method is irrelevant and we refer to the final model only.

We aim for an efficient explicit formulation how to find counterfactuals, given an input →x and a specific LVQ model.

where P(y′) denotes the set of all prototypes not labeled as y′. Note that the feasible region of Eq. 9 is always non-empty - the prototype p→i is always a feasible solution.

The pseudocode for computing a counterfactual of a LVQ model is described in Algorithm 1.

Note that the for loop in line 3 of Algorithm 1 can be easily parallelized. Furthermore and in contrast to Eq. 1, we do not have any hyperparameters that need to be chosen. In the subsequent sections we explore Eq. 9 for different regularizations θ() and LVQ models, and investigate how to solve it efficiently. Note that for the purpose of better readability and due to space constraints, we put all derivations in the appendix (section 5).

becomes either a linear program (LP) or a convex quadratic program (QP).

When using the weighted Manhattan distance Eq. 2 as a regularization θ(), Eq. 9 can be written as a LP:

Note that qij and rij are the same as in Eq. 10. Eq. 10 and Eq. 14 both contain strict inequalities →x′⊤→γij+cij<0. Unfortunately, strict inequalities are not allowed in linear/quadratic programming because the feasible region would become an open set. However, we could turn the < into a ≤ by subtract a small number ϵ from the right side of the inequality. In practice, when implementing our methods, we found that we can safely replace all < by ≤ without changing anything else - this might be because of the numerics (like round-off errors) of fixed size floating-point numbers. Both a linear and a convex quadratic program can be solved efficiently [29]. Another benefit is that we can easily add additional linear constraints like box constraints, restricting the value range of linear interaction of features or freezing some features - these features are not allowed to be different in the counterfactual.

When using the weighted Manhattan distance Eq. 2 as a regularization θ(), the optimization problem Eq. 9 becomes:

When using the Euclidean distance Eq. 4 as a regularization θ(), Eq. 9 can be written as:

Unfortunately, we can not make any statement about the definiteness of Qij. Because Qij is the difference of two s.p.s.d. matrices, all we know is that it is a symmetric matrix. Therefore, Eq. 15 and Eq. 19 are both non-convex QCQPs and solving a non-convex QCQP is known to be NP-hard [30]. However, there exist methods like the Suggest-Improve framework [30] that can approximately solve a non-convex QCQP very efficiently - more details on how to apply this to Eq. 15 and Eq. 19 can be found in the appendix (section 5).

In order to empirically confirm the efficiency of our proposed methods, we conducted some experiments:

We implemented our proposed methods (Algorithm 1) for computing counterfactual explanations555Available on GitHub https://github.com/andreArtelt/efficient_computation_counterfactuals_lvq. We used the SCS solver [33, 34] for solving linear/quadratic programs and the Suggest-Improve framework [30] for approximatly solving non-convex QCQPs - we simply picked the target prototype as an initial feasible solution in the Suggest-step and used the penalty convex-concave procedure (CCP)666As a subroutine, we used the MOSEK solver - https://www.mosek.com. We gratefully acknowledge the academic license provided by MOSEK ApS. in the Improve-step [35, 30]. For comparison, we used the optimizer for computing counterfactual explanations of LVQ models as implemented in ceml [36] - the optimization problem Eq. 1, where the loss function is the distance to the nearest prototype with the requested label y′, is minimized by the Downhill-Simplex algorithm. In all cases (including our methods), we used the Manhattan distance as a regularizer.

For each possible combination of model, data set and method, we did a 4-fold cross validation and recorded for each sample the computation time as well as the Manhattan distance between the counterfactual and the original data point.

The results are listed in Table 1 and Table 2.

In all cases, our method yields counterfactuals that are closer to the original data point and is always (much) faster than optimizing the original cost function Eq. 1 by using the Downhill-Simplex algorithm. All experiments were implemented in Python 3.6 [37] using the packages cvxpy [38] cvx-qcqp [39], sklearn-lvq [40], numpy [41], scipy [42], scikit-learn [43] and ceml [36].

We proposed, and empirically evaluated, model- and regularization-dependent convex and non-convex programs for efficiently computing counterfactual explanations of LVQ models. We found that in many cases we get either a set of linear or convex quadratic programs which both can be solved efficiently. Only in the case of localized LVQ models we have to solve a set of non-convex quadratically constrained quadratic programs - we found that they can be efficiently approximately solved by using the Suggest-Improve framework.

Next, we note that that we can drop the constant →x⊤→x when optimizing with respect to →x′:

First, we transform the problem of minimizing the weighted Manhattan distance (Eq. 2) into epigraph form:

Next, we separate the dimensions:

After that, we remove the absolute value function:

Finally, we rewrite everything in matrix-vector notation:

5.3 Enforcing a specific prototype as the nearest neighbor

By using the following set of inequalities, we can force the prototype p→i to be the nearest neighbor of the counterfactual →x′ - which would cause →x′ to be classified as oi:

We consider a fixed pair of i and j:

If we only have one global distance matrix Ω, we find that Qij=0 and the inequality Eq. 28 simplifies:

If we do not use a custom distance matrix, we have Ω=I and Eq. 28 becomes:

where the matrix Qij is defined as the difference of two s.p.s.d. matrices:

Under the assumption that our regularization function θ() is a convex function777The weighted Manhattan distance and the Euclidean distance are convex functions!, we can rewrite a generic version of the non-convex QCQP (Eq. 15 and Eq. 19) as follows:

Note that we relaxed the strict inequality. Because Ωi and Ωj are s.p.s.d. matrices, we know that f(→x′) and g(→x′) are convex functions. Therefore, Eq. 43 is a difference-of-convex program (DCP).

This allows us to use the penalty convex-concave procedure (CCP) [30] for computing an approximate solution of Eq. 43 that is equivalent to the original non-convex QCQPs Eq. 15 and Eq. 19. For using the penalty CCP, we need the first order Taylor approximation of g(→x′) around a current point →xk: