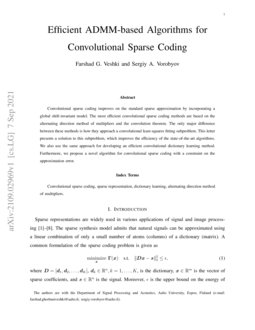 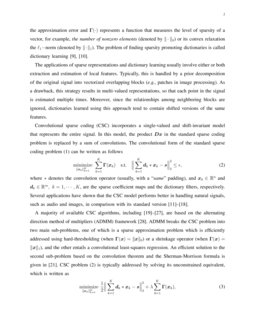 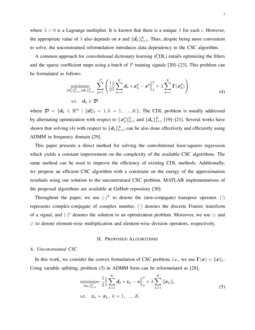 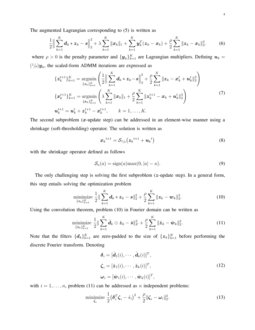 Sparse and convolutional constraints form a natural prior for many optim...
Hilton Bristow, et al. ∙

Sparse representations are widely used in various applications of signal and image processing [face_rec2009, sig_rec2007, im_den20016, im_sr2010, hyper2012, 5G2015, my_mffusion, my_mmfusion]. The sparse synthesis model admits that natural signals can be approximated using a linear combination of only a small number of atoms (columns) of a dictionary (matrix). A common formulation of the sparse coding problem is given as

is the vector of sparse coefficients, and

s∈Rn is the signal. Moreover, ϵ is the upper bound on the energy of the approximation error and Γ(⋅) represents a function that measures the level of sparsity of a vector, for example, the number of nonzero elements (denoted by ∥⋅∥0) or its convex relaxation the ℓ1−norm (denoted by ∥⋅∥1). The problem of finding sparsity promoting dictionaries is called dictionary learning [MOD1999, KSVD2006].

The applications of sparse representations and dictionary learning usually involve either or both extraction and estimation of local features. Typically, this is handled by a prior decomposition of the original signal into vectorized overlapping blocks (

e.g., patches in image processing). As a drawback, this strategy results in multi-valued representations, so that each point in the signal is estimated multiple times. Moreover, since the relationships among neighboring blocks are ignored, dictionaries learned using this approach tend to contain shifted versions of the same features.

where ∗ denotes the convolution operator (usually, with a “same

xk∈Rn and dk∈Rm, k=1,⋯,K, are the sparse coefficient maps and the dictionary filters, respectively. Several applications have shown that the CSC model performs better in handling natural signals, such as audio and images, in comparison with its standard version [piano2017, music2016, CT2019, fusion2016, RGB2018, superres2015, rain2018, astro2021].

A majority of available CSC algorithms, including [Bristow2013, Heide2015, Wohlberg2016, Peng2019, Choudhury2017, Papyan2017, Otero2020, Papyan20172, Wang2018], are based on the alternating direction method of multipliers (ADMM) framework [ADMM2011]. ADMM breaks the CSC problem into two main sub-problems, one of which is a sparse approximation problem which is efficiently addressed using hard-thresholding (when Γ(x)=∥x∥0) or a shrinkage operator (when Γ(x)=∥x∥1), and the other entails a convolutional least-squares regression. An efficient solution to the second sub-problem based on the convolution theorem and the Sherman-Morrison formula is given in [Wohlberg2016]. CSC problem (2) is typically addressed by solving its unconstrained equivalent, which is written as

where λ>0 is a Lagrange multiplier. It is known that there is a unique λ for each ϵ. However, the appropriate value of λ also depends on s and {dk}Kk=1. Thus, despite being more convenient to solve, the unconstrained reformulation introduces data dependency to the CSC algorithm.

A common approach for convolutional dictionary learning (CDL) entails optimizing the filters and the sparse coefficient maps using a batch of P training signals [Heide2015, Choudhury2017, Wohlberg2016, Peng2019]. This problem can be formulated as follows

This paper presents a direct method for solving the convolutional least-squares regression which yields a constant improvement on the complexity of the available CSC algorithms. The same method can be used to improve the efficiency of existing CDL methods. Additionally, we propose an efficient CSC algorithm with a constraint on the energy of the approximation residuals using our solution to the unconstrained CSC problem. MATLAB implementations of the proposed algorithms are available at GitHub repository [GithubRep].

Throughout the paper, we use (⋅)T to denote the (non-conjugate) transpose operator. (¯⋅) represents complex-conjugate of complex number, (^⋅)

denotes the discrete Fourier transform of a signal, and

(⋅)⋆ denotes the solution to an optimization problem. Moreover, we use ⊙ and ⊘ to denote element-wise multiplication and element-wise division operators, respectively.

In this work, we consider the convex formulation of CSC problem, i.e., we use Γ(x)=∥x∥1. Using variable splitting, problem (3) in ADMM form can be reformulated as [ADMM2011],

The augmented Lagrangian corresponding to (5) is written as

where ρ>0 is the penalty parameter and {yk}Kk=1 are Lagrangian multipliers. Defining uk=(\sfrac1ρ)yk, the scaled-form ADMM iterations are expressed as

The second subproblem (x-update step) can be addressed in an element-wise manner using a shrinkage (soft-thresholding) operator. The solution is written as

with the shrinkage operator defined as follows

The only challenging step is solving the first subproblem (z-update step). In a general form, this step entails solving the optimization problem

Using the convolution theorem, problem (10) in Fourier domain can be written as

Note that the filters {dk}Kk=1 are zero-padded to the size of {zk}Kk=1 before performing the discrete Fourier transform. Denoting

with i=1,…,n, problem (11) can be addressed as n independent problems:

Equating the derivative with respect to ζi to zero, we have

which can be inferred from the second line of (14). Solving problem (18) using direct matrix inversion results in a time complexity of O(K3) [Bristow2013]. However, the work of [Wohlberg2016] demonstrated that this can be reduced to O(K) using the Sherman-Morrison formula. The time complexity of the proposed method is also of O(K). However, using further simplifications, the proposed approach eliminates the need for explicit matrix inversion and requires fewer computations. In particular, performing the z-update step on a batch of P images using the proposed method requires ((4K+1)P+3K+1)n flops, while it takes (7KP+3K+1)n flops using the method of [Wohlberg2016], indicating a considerable improvement provided by our method.

where f({zk}Kk=1) is an indicator function of the constraint set in (3), that is,

The ADMM iterations are

Depending on {wk}Kk=1, problem (23) either has a trivial solution or it is equivalent to an equality-constrained optimization problem. This can be expressed as

Using a suitable Lagrange multiplier ν, the problem in the second term of (24) can be reformulated as

where the division by n is required by Parseval’s theorem. Thus, problem (23) is simplified to a single-variable optimization problem for finding the optimal multiplier ν⋆, which satisfies

Considering that e({z⋆k}Kk=1) is monotonically increasing in ν > 0, this problem can be efficiently addressed, for example, using the secant method. Once ν⋆ is known, the z-update can be performed as

with the ADMM iterations

The first subproblem (g-update) is similar to problem (10). Thus, it can be efficiently addressed using the proposed approach in Section II-A. The use of the Fourier domain-based approach requires {gpk}Kk=1 to be the same size as {xpk}Kk=1. As a result, the filters {dk}Kk=1 are zero-padded to the size of {xpk}Kk=1 to be conformable with {gpk}Kk=1. The second subproblem (dk-update) can be solved simply by projecting 1P∑Pp=1(gp,t+1k+vp,tk) on the constraint set by mapping the entries outside the constraint support to zero before normalizing the ℓ2−norm.

CDL problem (4) is addressed by alternating between CSC (see Section II-A) and dictionary update (see Section II-C) subproblems. We use a single iteration for each subproblem. This approach has been shown to be effective while simplifying the algorithm [Wohlberg2016, cardona2018]. We also use the variable coupling approach suggested in [cardona2017] which is shown to provide a better numerical stability [Wohlberg2016, cardona2018]. Specifically, the sparse codes {xpk}Kk=1 and the constrained filters {dk}Kk=1 are passed to the next subproblem.

In this section, we first compare the proposed unconstrained CSC algorithm with the state-of-the-art method, which uses the Sherman-Morrison formula in convolutional fitting step (the SM method) [Wohlberg2016]. Then, we compare our unconstrained and constrained CSC methods in terms of convergence speed. Finally, we compare the proposed CDL algorithm with three available methods. All methods are based on the same alternating approach explained in Section II-D and use ADMM in both phases (CSC and dictionary update). All compared methods use the SM method in CSC phase. The compared dictionary learning methods are based on the conjugate gradient method (CG) [Wohlberg2016], the iterative Sherman-Morrison method (ISM) [Wohlberg2016] and a method based on the consensus ADMM framework and the Sherman-Morrison formula (SM-cns) [cardona2018].

A 512×512 greyscale Lena image is used in the CSC experiments. The CDL experiments are performed using a dataset of 20 images taken from the USC-SIPI database [SIPIdatabase]. All images in the dataset are converted to greyscale and resized to 256×256 pixels. All methods are implemented using MATLAB. All experiments are conducted on a PC equipped with an Intel(R) Core(TM) i5-8365U 1.60GHz CPU.

Fig. 1 shows the functional values over time for 25 iterations of the proposed unconstrained CSC method and the SM method using different values of ρ and λ. We use a fixed number of iterations to display the deference in efficiencies (the iterations of the two methods are equally effective). As it can be seen, the proposed method is significantly more efficient in all cases. The algorithm complexities have been compared in Section II-A.

In Fig. 3, the functional values over time for 50 iterations of all CDL methods using different dataset sizes (P) are compared. The complexity of the ISM method is of O(KP2), which makes it inefficient when P is large. CG improves scalability, but slows down the convergence. The complexities of the proposed method and SM-cns are both of O(KP), while their iterations are equally effective. However, as it can be seen, the proposed method is substantially faster. This is achieved by using the method explained in Section II-A instead of the Sherman-Morrison formula, in both the z-update step (CSC phase) and the g-update step (dictionary update phase).

In Fig. 4 the convergence speeds of the proposed CDL method and SM-cns using different dictionary sizes (K) are compared. The improved computational efficiency of the proposed method can be clearly observed.