For a multinomial distribution, suppose that we have prior knowledge of the sum of the probabilities of some categories. This allows us to construct a submodel in a full (i.e., no-restriction) model. Maximum likelihood estimation (MLE) under this submodel is expected to have better estimation efficiency than MLE under the full model. This article presents the asymptotic expansion of the risk of MLE with respect to Kullback--Leibler divergence for both the full model and submodel. The results reveal that, using the submodel, the reduction of the risk is quite small in some cases. Furthermore, when the sample size is small, the use of the subomodel can increase the risk. 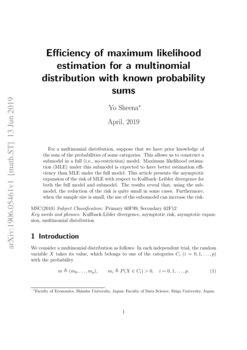 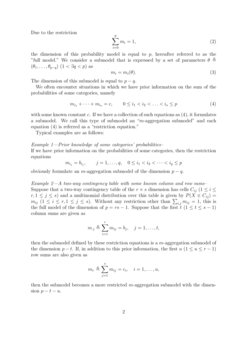 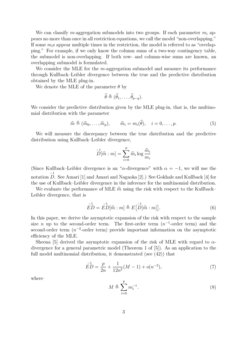 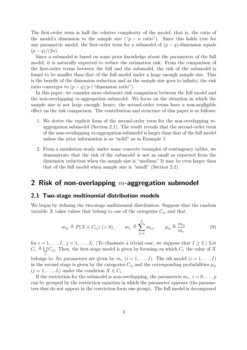 Maximum Likelihood Estimation from a Tropical and a Bernstein–Sato Perspective

Asymptotic efficiency of M.L.E. using prior survey in multinomial distributions

Incorporating information from a prior survey is generally supposed to d...
Yo Sheena, et al. ∙

For a parametric model of distributions, the closest distribution in the...
Yo Sheena, et al. ∙

We consider a multinomial distribution as follows: In each independent trial, the random variable

X takes its value, which belongs to one of the categories Ci (i=0,1,…,p) with the probability

Due to the restriction

the dimension of this probability model is equal to p, hereafter referred to as the ”full model.” We consider a submodel that is expressed by a set of parameters θ≜(θ1,…,θp−q) (1<∃q<p) as

The dimension of this submodel is equal to p−q.

We often encounter situations in which we have prior information on the sum of the probabilities of some categories, namely

with some known constant c. If we have a collection of such equations as (4), it formulates a submodel. We call this type of submodel an “m-aggregation submodel” and each equation (4) is referred as a “restriction equation.”

obviously formulate an m-aggregation submodel of the dimension p−q. Example 2—A two-way contingency table with some known column and row sums–

Suppose that a two-way contingency table of the

r×s dimension has cells Cij (1≤i≤r,1≤j≤s) and a multinomial distribution over this table is given by P(X∈Cij)=mij (1≤i≤r,1≤j≤s). Without any restriction other than ∑i,jmij=1, this is the full model of the dimension of p=rs−1. Suppose that the first t (1≤t≤s−1) column sums are given as

then the submodel defined by these restriction equations is a m-aggregation submodel of the dimension p−t. If, in addition to this prior information, the first u (1≤u≤r−1) row sums are also given as

then the submodel becomes a more restricted m-aggregation submodel with the dimension p−t−u.

m-aggregation submodels into two groups. If each parameter mi appears no more than once in all restriction equations, we call the model “non-overlapping.” If some mis appear multiple times in the restriction, the model is referred to as “overlapping.” For example, if we only know the column sums of a two-way contingency table, the submodel is non-overlapping. If both row- and column-wise sums are known, an overlapping submodel is formulated.

We consider the MLE for the m-aggregation submodel and measure its performance through Kullback–Leibler divergence between the true and the predictive distribution obtained by the MLE plug-in.

We denote the MLE of the parameter θ by

We consider the predictive distribution given by the MLE plug-in, that is, the multinomial distribution with the parameter

We evaluate the performance of MLE ˆm using the risk with respect to the Kullback–Leibler divergence, that is

-divergence for a general parametric model (Theorem 1 of

[5]). As an application to the full model multinomial distribution, it demonstrated (see (42)) that

Since a submodel is based on some prior knowledge about the parameters of the full model, it is naturally expected to reduce the estimation risk. From the comparison of the first-order terms between the full and the submodel, the risk of the submodel is found to be smaller than that of the full model under a large enough sample size. This is the benefit of the dimension reduction and as the sample size goes to infinity, the risk ratio converges to (p−q)/p (“dimension ratio”).

In this paper, we consider more elaborate risk comparison between the full model and the non-overlapping m-aggregation submodel. We focus on the situation in which the sample size is not large enough; hence, the second-order terms have a non-negligible effect on the risk comparison. The contribution and structure of this paper is as follows:

We begin by defining the two-stage multinomial distribution. Suppose that the random variable X takes values that belong to one of the categories Cij and that

for i=1,…,I, j=1,…,Ji. (To eliminate a trivial case, we suppose that I≥2.) Let Ci⋅≜⋃jCij. Then, the first-stage model is given by focusing on which Ci⋅ the value of X belongs to. Its parameters are given by mi⋅ (i=1,…,I). The ith model (i=1,…,I) in the second stage is given by the categories Cij and the corresponding probabilities pij (j=1,…,Ji) under the condition X∈Ci⋅.

where EU1[⋅] is the expectation under the condition Ud=U1. (For more details on divergences, see Vajda [7] and Amari and Nagaoka [2].)

Thanks to this property, we can decompose the MLE risk into several parts, each of which corresponds to the first- and second-stage distributions.

When a sample of size n is taken from the two-stage multinomial distribution, let xij and xi⋅ (i=1,…,I,j=1,…,Ji) denote the number of individuals that belong to Cij and Ci⋅, respectively, hence

The notations of Xij and Xi⋅ are similarly defined as the corresponding random variables.

In this section, we always assume that mi⋅ and pij are parameterized independently, that is,

We obtain the following result.

The MLE for the two-stage multinomial distribution model, ˆm=(ˆmij), is given by

For the sample x=(xij), the log-likelihood is expressed as

up to constant with the sample xi1,…,xiJi. Since mij=mi⋅(τ)pij(θ(i)), all the results are obtained. ∎

Hereon, we consider only MLE as the estimator ˆm of m, which is given by (13).

The following decomposition of −1D[ˆm:m] holds;

It should be noted that it is possible that Xi⋅=0. Hence, we can encounter a situation in which we are unable to estimate pij, j=1,…,Ji, the parameter of the i-th second-stage model, because there is no available sample. We overcome this problem by making it a rule to discard such samples with no estimation. In the following theorems, all the expectations are conditional on the state Xi⋅≠0, 1≤∀i≤I. However, as Lemma 1 in the Appendix shows, the conditional expectations of Kullback–Leibler divergence and (Xi⋅−nmi⋅)k(k=1,2,…) differ from those that are unconditional by o(n−s) for any s>0. Therefore, we use the same notation as that for the unconditional distribution.(Avoiding zero probability estimates is a practically important issue. See Darsheid et.al. [3].)

The next theorem is Theorem 1 of Sheena [6]. It provides the decomposition of −1ED when the first-stage model is a full model.

If the first-stage model is a full model, then the risk of MLE is equal to

Suppose that we have prior knowledge on τ in (11), equivalently mf. The next theorem gives the risk of MLE for this situation.

If the first-stage model is a full model and τi (i=1,…,I) are all known, then the risk of MLE is

Especially, if all the second-stage models are full models, then the risk of MLE is

Taylor expansions of 1/Xi⋅ and 1/X2i⋅ are given by

When all the second-stage models are full,

If we insert these results into (19), we have

We now compare the risk of (18) and that of the (19). Notice that the difference between Theorem 2 and Theorem 3 is the existence of the prior information on Mf. We call the models in Theorem 2 and 3 “M1” and “M’2,” respectively. If the second-stage models are all full, then M1 becomes the full model and M2 becomes the m-aggregation submodel.

especially, when the second-stage models are all full models,

Regarding the first-order terms, that of M2 is always smaller than that of M1. The risk ratio between the full and submodels is close to the dimension ratio

under a large enough sample size.

When the second-stage models are all full, si=0 is equivalent to Ji=1, namely

in (24). We call the restriction equation of this type “solid” as it provides solid information on the probability of a particular cell. The aforementioned result is applied to the m-aggregation model as a corollary.

If none of the restriction equations of the m-aggregation submodel are solid, then the second-order term of the submodel is larger than that of the full model.

Our conclusion is as follows:

The comparison between the full and sub models is based on (18) and (19), which are “approximations” of the true risks obtained by neglecting o(n−2) terms.

2.2 Numeric analysis of some examples

In the previous subsection, we observed the risk difference between the full model and the non-overlapping m-aggregation submodel through the approximated risks, that is, the asymptotic expansion of the risks up to the second order. In this subsection we confirm several results using simulation with three examples. Every example is a two-way contingency table and the non-overlapping m-aggregation submodel is given as the one in which the column sums are all known (see Example 2 in Introduction). As a two-stage model, the first-stage model consists of the multinomial distribution over the columns and each second-stage model is the distribution over the rows within a given column.

To compare the submodel and full model, we also use the indicator, “the required sample size (r.s.s) of the submodel to the full model under the condition n0,” which is defined by the solution n∗ of the following equation

where −1EDs(n) and −1EDf(n) are the risks of the sub and full model considered as the function of the sample size, respectively. This reveals the required sample size for the submodel is equal in terms of risk with the full model of the sample size n0. The risks in the equation above are calculated by approximation or simulation.

–Example 1– The first example is an artificial setting to confirm some theoretical results in the previous subsection. Consider a 100 x 2 contingency table with uniform probability. Consequently, I=2,J1=J2=100 and

In this setting, the use of the submodel (prior information) makes little contribution to risk reduction because there is virtually just one restriction equation while the dimension of the full model is as large as 199.

The risks and r.s.s. under several values of n are given in Table 1. The r.s.s is under the condition n0=n. For the calculation of the simulated risk, we used 104 sets of samples and took the average over these.

We observe the following results:

https://archive.ics.uci.edu/ml/datasets/Breast+Cancer). We created a cross-tabulation table from the variable “the degree of malignancy” (3 levels:1,2,3) and “age group” (5 groups: 30–39,…,70–79) excluding one person in his or her twenties from the original data set. We gained the relative frequency by dividing each cell by the total number of individuals (285)(see Table 2). We assume that this is the true probability mij, i=1,…,3,j=1,…,5 for each category. We treat the submodel according to the situation in which we have prior knowledge of the sums of each column, that is, the distribution over the age groups.

We summarize the result as follows:

–Example 3– We use data from the “2014 National Survey of Family Income and Expenditure” by the Statistics Bureau in Japan (https://www.stat.go.jp/english/data/zensho/index.html). Table 4 is the relative frequency obtained from the classification of 100,006 households according to “Yearly income group (Y1,…,Y10)” and “Household age group (H1,…,H6).” We use this relative frequency as the population parameter mij, 1≤i≤10, 1≤j≤6. We consider the submodel that is based on the prior knowledge of all the column sums. Table 5 presents the results.

We summarize the results as follows:

The theoretical and numerical analyses revealed the following points:

We briefly refer to the following points for further study:

1) and the sample size n. The distribution under the condition Xi≠0,0≤∀i≤p is considered. Let the unconditional and conditional expectations of a random variable Y(X) be denoted by E[Y(X)] and E∗[Y(X)], respectively. If

holds with some nonnegative numbers a,b,c, the difference between the two expectations decreases to zero with exponential speed as n goes to infinity, namely for any s>0,

, and the moments of

For i(=1,…,p+1) and s(>0), because the following equivalence relationship holds

Let Zp+1+ be the set of all p+1-dimensional vectors whose elements are nonnegative integers.