The spiking neural network (SNN) has been attracting considerable attention not only as a mathematical model for the brain, but also as an energy-efficient information processing model for real-world applications. In particular, SNNs based on temporal coding are expected to be much more efficient than those based on rate coding, because the former requires substantially fewer spikes to carry out tasks. As SNNs are continuous-state and continuous-time models, it is favorable to implement them with analog VLSI circuits. However, the construction of the entire system with continuous-time analog circuits would be infeasible when the system size is very large. Therefore, mixed-signal circuits must be employed, and the time discretization and quantization of the synaptic weights are necessary. Moreover, the analog VLSI implementation of SNNs exhibits non-idealities, such as the effects of noise and device mismatches, as well as other constraints arising from the analog circuit operation. In this study, we investigated the effects of the time discretization and/or weight quantization on the performance of SNNs. Furthermore, we elucidated the effects the lower bound of the membrane potentials and the temporal fluctuation of the firing threshold. Finally, we propose an optimal approach for the mapping of mathematical SNN models to analog circuits with discretized time. 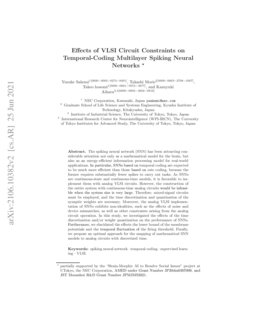 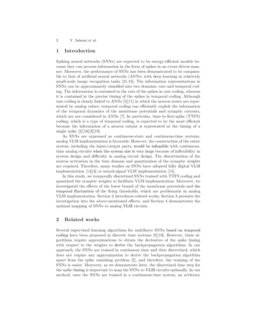 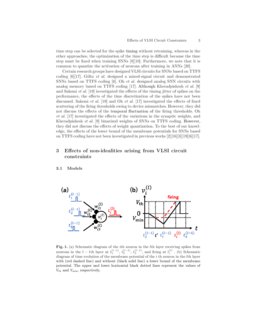 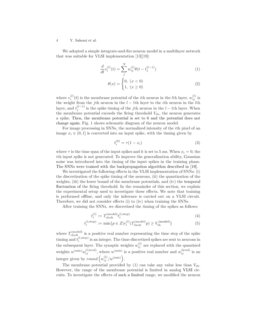 Spiking neural networks (SNNs) are expected to be energy-efficient models because they can process information in the form of spikes in an event-driven manner. Moreover, the performance of SNNs has been demonstrated to be comparable to that of artificial neural networks (ANNs) with deep learning in relatively small-scale image recognition tasks

in which the neuron states are represented by analog values, temporal coding can efficiently exploit the information of the temporal dynamics of the membrane potentials and synaptic currents, which are not considered in ANNs

[7]. In particular, time-to-first-spike (TTFS) coding, which is a type of temporal coding, is expected to be the most efficient because the information of a neuron output is represented as the timing of a single spike [2][16][3][19].

In this study, we temporally discretized SNNs trained with TTFS coding and quantized the synaptic weights to facilitate VLSI implementation. Moreover, we investigated the effects of the lower bound of the membrane potentials and the temporal fluctuation of the firing thresholds, which are problematic in analog VLSI implementation. Section 2 introduces related works, Section 3 presents the investigation into the above-mentioned effects, and Section 4 demonstrates the optimal mapping of SNNs to analog VLSI circuits.

Several supervised learning algorithms for multilayer SNNs based on temporal coding have been proposed in discrete time systems [8][10]. However, these algorithms require approximations to obtain the derivative of the spike timing with respect to the weights to derive

[2], and therefore, the training of the SNNs is easier. Moreover, as we demonstrate later, the discretized time step for the spike timing is important to map the SNNs to VLSI circuits optimally. In our method, once the SNNs are trained in a continuous-time system, an arbitrary time step can be selected for the spike timing without retraining, whereas in the other approaches, the optimization of the time step is difficult because the time step must be fixed when training SNNs [8][10]. Furthermore, we note that it is common to quantize the activation of neurons after training in ANNs [20].

We adopted a simple integrate-and-fire neuron model in a multilayer network that was suitable for VLSI implementation [13][19]:

For image processing in SNNs, the normalized intensity of the ith pixel of an image xi∈(0,1] is converted into an input spike, with the timing given by

where τ is the time span of the input spikes and it is set to 5 ms. When xi=0, the ith input spike is not generated. To improve the generalization ability, Gaussian noise was introduced into the timing of the input spikes in the training phase. The SNNs were trained with the backpropagation algorithm described in [19].

We investigated the following effects in the VLSI implementation of SNNs: (i) the discretization of the spike timing of the neurons, (ii) the quantization of the weights, (iii) the lower bound of the membrane potentials, and (iv) the temporal fluctuation of the firing threshold. In the remainder of this section, we explain the experimental setup used to investigate these effects. We note that training is performed offline, and only the inference is carried out on a VLSI circuit. Therefore, we did not consider effects (i) to (iv) when training the SNNs.

After training the SNNs, we discretized the timing of the spikes as follows:

where T(model)clock is a positive real number representing the time step of the spike timing and t(l,step)i is an integer. The time-discretized spikes are sent to neurons in the subsequent layer. The synaptic weights w(l)ij are replaced with the quantized weights w(min)w(l,level)ij, where w(min) is a positive real number and w(level)ij is an integer given by round(w(l)ij/w(min)).

is drawn from the Gaussian distribution as

where N(a,b) is a Gaussian distribution with a mean of a

and standard deviation of

b. The standard deviation of the firing threshold is given by σVth.

In this section, we demonstrate the effects of VLSI circuit constrains on SNNs (784-800-10) for the MNIST

The left panels of Fig. 3 depicts the performance of the SNNs with time-discretized spikes for various values of T(model)clock. For both the MNIST and Fashion-MNIST datasets, the effects of the time discretization of the spikes at the output layer were more significant than those at the other layers. This can be attributed to the fact that the prediction results obtained by the network are represented by the earliest spike at the output layer. If the real timing difference between the earliest and second earliest spikes is less than T(model)clock, the network cannot predict the correct label when the timing of the spikes is discretized. The effects of the time discretization of the spike timing were substantially lower for the input layer. This may be because the coding of the input spikes includes “no spike” states, which are inherently robust against timing discretization.

One may wonder why the SNNs trained on the MNIST dataset were almost not affected by the lower bound when Vmin = -1, even though the average of the minimum voltage v(min) given by (8) was much lower than -1 as shown in Fig. 4 (c). This is because the minimum values (8) were typically obtained after another neuron was fired, as shown in Fig. 2. To elucidate this fact, Fig. 4 (d) plots the distribution of the minimum membrane potential before the timing of the earliest spike:

We found that a large portion of the minimum membrane potentials given by (9) had distributions that were higher than -0.5.

Fig. 5 depicts the classification accuracy for various values of σVth. We found that the performance of the SNNs was not significantly impaired if σVth was less than 0.05 for the MNIST and Fashion-MNIST datasets.

4 Mapping of SNNs to Vlsi circuits

We demonstrate a procedure for mapping SNNs to VLSI circuits. First, we introduce a VLSI circuit model derived from Kirchhoff’s law. Second, we show how to map an SNN to the VLSI circuit optimally, assuming certain circuit parameters and constraints.

We consider an integrate-and-fire model as illustrated in Fig. 6

, which is commonly employed in matrix–vector computation

where I(min) represents the controllable minimum current, I(level)ij is an integer, and C is the capacitance. The timing of the firing is obtained as follows:

where T(circuit)clock is a real number representing the time step of the time-discrete spikes in the circuits.

By setting I(l,level)ij=w(l,level)ij, the condition whereby (1) and (10) are equivalent can be obtained as follows:

4.2 Optimal mapping of SNNs to circuits

We used the circuit parameters displayed in Fig. 6 to study the mapping of SNNs to circuits. These values of parameters were determined typically from VLSI design based on the approach of time-domain analog computing with transient states (TACT), in which synapse currents were given by field-effect transistors operating in a subthreshold region [22, 25].

In this study, we evaluated the performance of SNNs with TTFS coding on the MNIST and Fashion-MNIST datasets when considering circuit constraints. We found that the SNNs with TTFS coding were robust against these circuit constraints. Although information is contained in the precise spike timing in SNNs, the performance of the SNNs was only slowly degraded as the time step of the time discretization increased. Only 20 or 30 quantized levels were sufficient for the weights to prevent performance impairment, which corresponded to 4- or 5-bit precision. The lower bound of the membrane potential was not critical if we used only the earliest spike as the prediction result. The temporal fluctuation of the firing threshold was also not critical.

We demonstrated the optimal mapping of SNN models with TTFS coding to VLSI circuits, assuming a reasonable set of circuit parameters. We confirmed that the optimal choice of the discretization parameters for the spike timing and weights is obtained by a trade-off between the classification accuracy and energy efficiency. In this study, we fixed the circuit parameters and searched for the optimal discretization parameters for the SNNs. It will be straightforward to expand this strategy so that one can also search for optimal circuit parameters such as the clock period T(circuit)clock and the capacitance of neurons C. Further, we focused on a specific neuron model (1), however, the proposed techniques can be applied to other neuron models such as ones adopted in [16] and [3].

The authors would like to thank Kazumasa Yanagisawa and Masatoshi Yamaguchi from Floadia corporation for the fruitful discussion.