Effectiveness of Anonymization in Double-Blind Review

Double-blind review relies on the authors' ability and willingness to effectively anonymize their submissions. We explore anonymization effectiveness at ASE 2016, OOPSLA 2016, and PLDI 2016 by asking reviewers if they can guess author identities. We find that 74 that reviewers who self-identify as experts on a paper's topic are more likely to attempt to guess, but no more likely to guess correctly. We present our findings, summarize the PC chairs' comments about administering double-blind review, discuss the advantages and disadvantages of revealing author identities part of the way through the process, and conclude by advocating for the continued use of double-blind review. 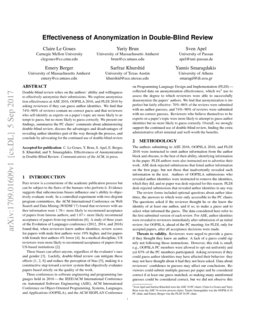 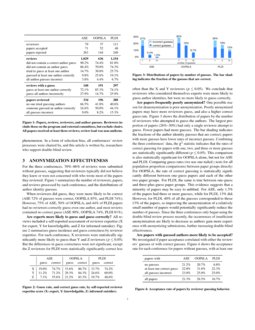 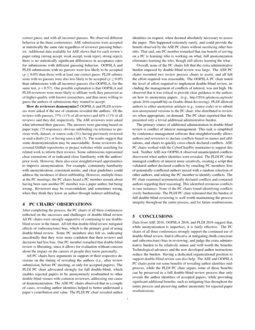 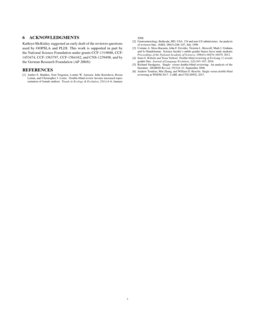 Peer review is a cornerstone of the academic publication process but can be subject to the flaws of the humans who perform it. Evidence suggests that subconscious biases influence one’s ability to objectively evaluate work: In a controlled experiment with two disjoint program committees, the ACM International Conference on Web Search and Data Mining (WSDM’17) found that reviewers with author information were 1.76× more likely to recommend acceptance of papers from famous authors, and 1.67× more likely recommend acceptance of papers from top institutions (Tomkins17, ). A study of three years of the Evolution of Languages conference (2012, 2014, and 2016) found that, when reviewers knew author identities, review scores for papers with male first authors were 19% higher, and for papers with female first authors 4% lower (Roberts16, ). In a medical discipline, US reviewers were more likely to recommend acceptance of papers from US-based institutions (Gastroenterology98, ).

These biases can affect anyone, regardless of the evaluator’s race and gender (Moss-racusin12, ). Luckily, double-blind review can mitigate these effects (Gastroenterology98, ; Tomkins17, ; Budden08, ) and reduce the perception of bias (Snodgrass06, ), making it a constructive step toward a review system that objectively evaluates papers based strictly on the quality of the work.

Three conferences in software engineering and programming languages held in 2016 — the IEEE/ACM International Conference on Automated Software Engineering (ASE), ACM International Conference on Object-Oriented Programming, Systems, Languages, and Applications (OOPSLA), and the ACM SIGPLAN Conference on Programming Language Design and Implementation (PLDI) — collected data on anonymization effectiveness, which we111Sven Apel and Sarfraz Khurshid were the ASE’16 PC chairs, Claire Le Goues and Yuriy Brun were the ASE’16 review process chairs, Yannis Smaragdakis was the OOPSLA’16 PC chair, and Emery Berger was the PLDI’16 PC chair. use to assess the degree to which reviewers were able to successfully deanonymize the papers’ authors. We find that anonymization is imperfect but fairly effective: 70%–86% of the reviews were submitted with no author guesses, and 74%–90% of reviews were submitted with no correct guesses. Reviewers who believe themselves to be experts on a paper’s topic were more likely to attempt to guess author identities but no more likely to guess correctly. Overall, we strongly support the continued use of double-blind review, finding the extra administrative effort minimal and well-worth the benefits.

The review forms included optional questions about author identities, the answers to which were only accessible to the PC chairs. The questions asked if the reviewer thought he or she knew the identity of at least one author, and if so, to make a guess and to select what informed the guess. The data considered here refer to the first submitted version of each review. For ASE, author identities were revealed to reviewers immediately after submission of an initial review; for OOPSLA, ahead of the PC meeting; for PLDI, only for accepted papers, after all acceptance decisions were made.

Threats to validity. Reviewers were urged to provide a guess if they thought they knew an author. A lack of a guess could signify not following those instructions. However, this risk is small, e.g., OOPSLA PC members were allowed to opt out uniformly and yet 83% of the PC members participated. Asking reviewers if they could guess author identities may have affected their behavior: they may not have thought about it had they not been asked. Data about reviewers’ confidence in guesses may affect our conclusions. Reviewers could submit multiple guesses per paper and be considered correct if at least one guess matched, so making many uninformed guesses could be considered correct, but we did not observe this phenomenon. In a form of selection bias, all conferences’ review processes were chaired by, and this article is written by, researchers who support double-blind review.

For the three conferences, 70%–86% of reviews were submitted without guesses, suggesting that reviewers typically did not believe they knew or were not concerned with who wrote most of the papers they reviewed. Figure 1 summarizes the number of reviewers, papers, and reviews processed by each conference, and the distributions of author identity guesses.

Are papers frequently poorly anonymized? One possible reason for deanonymization is poor anonymization. Poorly anonymized papers may have more reviewers guess, and also a higher correct guess rate. Figure 3 shows the distribution of papers by the number of reviewers who attempted to guess the authors. The largest proportion of papers (26%–30%) had only a single reviewer attempt to guess. Fewer papers had more guesses. The bar shading indicates the fractions of the author identity guesses that are correct; papers with more guesses have lower rates of incorrect guesses. Combining the three conferences’ data, the χ2 statistic indicates that the rates of correct guessing for papers with one, two, and three or more guesses are statistically significantly different (p≤0.05). This comparison is also statistically significant for OOPSLA alone, but not for ASE and PLDI. Comparing guess rates (we use one-tailed z tests for all population proportion comparisons) between paper groups directly: For OOPSLA, the rate of correct guessing is statistically significantly different between one-guess papers and each of the other two paper groups. For PLDI, the same is true between one-guess and three-plus-guess paper groups. This evidence suggests that a minority of papers may be easy to unblind. For ASE, only 1.5% of the papers had three or more guesses, while for PLDI, 13% did. However, for PLDI, 40% of all the guesses corresponded to those 13% of the papers, so improving the anonymization of a relatively small number of papers would potentially significantly reduce the number of guesses. Since the three conferences only began using the double-blind review process recently, the occurrences of insufficient anonymization are likely to decrease as authors gain more experience with anonymizing submissions, further increasing double-blind effectiveness.

How do reviewers deanonymize? OOPSLA and PLDI reviewers were asked if the use of citations revealed the authors. Of the reviews with guesses, 37% (11% of all reviews) and 44% (11% of all reviews) said they did, respectively. The ASE reviewers were asked what informed their guesses. The answers were guessing based on paper topic (75 responses); obvious unblinding via reference to previous work, dataset, or source code (31); having previously reviewed or read a draft (21); or having seen a talk (3). The results suggest that some deanonymization may be unavoidable. Some reviewers discovered GitHub repositories or project websites while searching for related work to inform their reviews. Some submissions represented clear extensions of or indicated close familiarity with the authors’ prior work. However, there also exist straightforward opportunities to improve anonymization. For example, community familiarity with anonymization, consistent norms, and clear guidelines could address the incidence of direct unblinding. However, multiple times at the PC meetings, the PC chairs heard a PC member remark about having been sure another PC member was a paper author, but being wrong. Reviewers may be overconfident, and sometimes wrong, when they think they know an author through indirect unblinding.

All PC chairs have arguments in support of their respective decisions on the timing of revealing the authors (i.e., after review submission, before PC meeting, or only for accepted papers). The PLDI PC chair advocated strongly for full double-blind, which enables rejected papers to be anonymously resubmitted to other double-blind venues with common reviewers, addressing one cause of deanonymization. The ASE PC chairs observed that in a couple of cases, revealing author identities helped to better understand a paper’s contribution and value. The PLDI PC chair revealed author identities on request, when deemed absolutely necessary to assess the paper. This happened extremely rarely, and could provide the benefit observed by the ASE PC chairs without sacrificing other benefits. That said, one PC member remarked that one benefit of serving on a PC is learning who is working on what; full anonymization eliminates learning the who, though still allows learning the what.

Overall, none of the PC chairs felt that the extra administrative burden imposed by double-blind review was large. The ASE PC chairs recruited two review process chairs to assist, and all felt the effort required was reasonable. The OOPSLA PC chair noted the level of effort required to implement double-blind review, including the management of conflicts of interest, was not high. He observed that it was critical to provide clear guidance to the authors on how to anonymize papers. (e.g., http://2016.splashcon.org/track/splash-2016-oopsla#FAQ-on-Double-Blind-Reviewing). PLDI allowed authors to either anonymize artifacts (e.g., source code) or to submit non-anonymized versions to the PC chair, who distributed to reviewers when appropriate, on demand. The PC chair reported that this presented only a trivial additional administrative burden.

The primary source of additional administration in double-blind review is conflict of interest management. This task is simplified by conference management software that straightforwardly allows authors and reviewers to declare conflicts based on names and affiliations, and chairs to quickly cross-check declared conflicts. ASE PC chairs worked with the CyberChairPro maintainer to support this task. Neither ASE nor OOPSLA observed unanticipated conflicts discovered when author identities were revealed. The PLDI PC chair managed conflicts of interest more creatively, creating a script that validated author-declared conflicts by emailing PC members lists of potentially-conflicted authors mixed with a random selection of other authors, and asking the PC member to identify conflicts. The PC chair examined asymmetrically declared conflicts and contacted authors regarding their reasoning. This identified erroneous conflicts in rare instances. None of the PC chairs found identifying conflicts overly burdensome. The PLDI PC chair reiterated that the burden of full double-blind reviewing is well worth maintaining the process integrity throughout the entire process, and for future resubmissions.

Data from ASE 2016, OOPSLA 2016, and PLDI 2016 suggest that, while anonymization is imperfect, it is fairly effective. The PC chairs of all three conferences strongly support the continued use of double-blind review, find it effective at mitigating (both conscious and subconscious) bias in reviewing, and judge the extra administrative burden to be relatively minor and well-worth the benefits. Technological advances and the now developed author instructions reduce the burden. Having a dedicated organizational position to support double-blind review can also help. The ASE and OOPSLA PC chairs point out some benefits of revealing author identities mid-process, while the PLDI PC chair argues some of those benefits can be preserved in a full double-blind review process that only reveals the author identities of accepted papers, while providing significant additional benefits, such as mitigating bias throughout the entire process and preserving author anonymity for rejected paper resubmissions.