We present a simple yet elegant solution to train a single joint model on multi-criteria corpora for Chinese Word Segmentation (CWS). Our novel design requires no private layers in model architecture, instead, introduces two artificial tokens at the beginning and ending of input sentence to specify the required target criteria. The rest of the model including Long Short-Term Memory (LSTM) layer and Conditional Random Fields (CRFs) layer remains unchanged and is shared across all datasets, keeping the size of parameter collection minimal and constant. On Bakeoff 2005 and Bakeoff 2008 datasets, our innovative design has surpassed both single-criterion and multi-criteria state-of-the-art learning results. To the best knowledge, our design is the first one that has achieved the latest high performance on such large scale datasets. Source codes and corpora of this paper are available on GitHub. 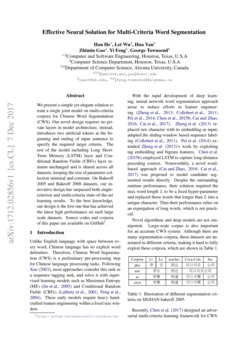 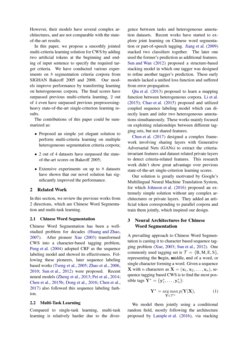 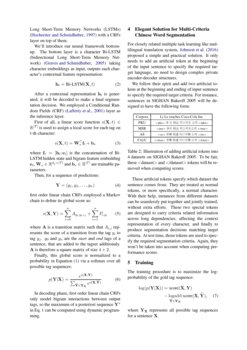 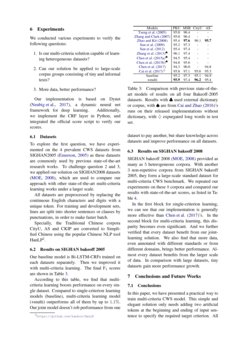 , most approaches consider this task as a sequence tagging task, and solve it with supervised learning models such as Maximum Entropy (ME)

Novel algorithms and deep models are not omnipotent. Large-scale corpus is also important for an accurate CWS system. Although there are many segmentation corpora, these datasets are annotated in different criteria, making it hard to fully exploit these corpora, which are shown in Table 1.

Recently, Chen et al. (2017) designed an adversarial multi-criteria learning framework for CWS. However, their models have several complex architectures, and are not comparable with the state-of-the-art results.

In this paper, we propose a smoothly jointed multi-criteria learning solution for CWS by adding two artificial tokens at the beginning and ending of input sentence to specify the required target criteria. We have conducted various experiments on 8

2 out of 4 even have surpassed previous preprocessing-heavy state-of-the-art single-criterion learning results.

The contributions of this paper could be summarized as:

In this section, we review the previous works from 2 directions, which are Chinese Word Segmentation and multi-task learning.

stacked two classifiers together. The later one used the former’s prediction as additional features.

proposed a structure-based stacking model in which one tagger was designed to refine another tagger’s prediction. These early models lacked a unified loss function and suffered from error propagation.

Our solution is greatly motivated by Google’s Multilingual Neural Machine Translation System, for which

Johnson et al. (2016) proposed an extremely simple solution without any complex architectures or private layers. They added an artificial token corresponding to parallel corpora and train them jointly, which inspired our design.

A prevailing approach to Chinese Word Segmentation is casting it to character based sequence tagging problem Xue (2003); Sun et al. (2012). One commonly used tagging set is T={B,M,E,S}, representing the begin, middle, end of a word, or single character forming a word. Given a sequence X with n characters as X=(x1,x2,…,xn), sequence tagging based CWS is to find the most possible tags Y∗={y∗1,…,y∗n}:

We model them jointly using a conditional random field, mostly following the architecture proposed by Lample et al. (2016), via stacking Long Short-Term Memory Networks (LSTMs) Hochreiter and Schmidhuber (1997) with a CRFs layer on top of them.

After a contextual representation ht is generated, it will be decoded to make a final segmentation decision. We employed a Conditional Random Fields (CRF) Lafferty et al. (2001) layer as the inference layer.

First of all, a linear score function s(X,t)∈R|T| is used to assign a local score for each tag on t-th character:

where ft=[ht;et] is the concatenation of Bi-LSTM hidden state and bigram feature embedding et, Ws∈Rdf×|T| and bs∈R|T| are trainable parameters.

Then, for a sequence of predictions:

where A is a transition matrix such that Ai,j represents the score of a transition from the tag yi to tag yj. y0 and yn are the start and end tags of a sentence, that are added to the tagset additionaly. A is therefore a square matrix of size 4+2.

Finally, this global score is normalized to a probability in Equation (

1) via a softmax over all possible tag sequences:

In decoding phase, first order linear chain CRFs only model bigram interactions between output tags, so the maximum of a posteriori sequence Y∗ in Eq. 1 can be computed using dynamic programming.

For closely related multiple task learning like multilingual translation system, Johnson et al. (2016) proposed a simple and practical solution. It only needs to add an artificial token at the beginning of the input sentence to specify the required target language, no need to design complex private encoder-decoder structures.

We follow their spirit and add two artificial tokens at the beginning and ending of input sentence to specify the required target criteria. For instance, sentences in SIGHAN Bakeoff 2005 will be designed to have the following form:

These artificial tokens specify which dataset the sentence comes from. They are treated as normal tokens, or more specifically, a normal character. With their help, instances from different datasets can be seamlessly put together and jointly trained, without extra efforts. These two special tokens are designed to carry criteria related information across long dependencies, affecting the context representation of every character, and finally to produce segmentation decisions matching target criteria. At test time, those tokens are used to specify the required segmentation criteria. Again, they won’t be taken into account when computing performance scores.

The training procedure is to maximize the log-probability of the gold tag sequence:

where YX represents all possible tag sequences for a sentence X.

We conducted various experiments to verify the following questions:

Our implementation is based on Dynet Neubig et al. (2017), a dynamic neural net framework for deep learning. Additionally, we implement the CRF layer in Python, and integrated the official score script to verify our scores.

To explore the first question, we have experimented on the 4 prevalent CWS datasets from SIGHAN2005 Emerson (2005) as these datasets are commonly used by previous state-of-the-art research works. To challenge question 2 and 3, we applied our solution on SIGHAN2008 datasets MOE (2008), which are used to compare our approach with other state-of-the-art multi-criteria learning works under a larger scale.

All datasets are preprocessed by replacing the continuous English characters and digits with a unique token. For training and development sets, lines are split into shorter sentences or clauses by punctuations, in order to make faster batch.

Our baseline model is Bi-LSTM-CRFs trained on each datasets separately. Then we improved it with multi-criteria learning. The final F1 scores are shown in Table 3.

SIGHAN bakeoff 2008 MOE (2008) provided as many as 5 heterogeneous corpora. With another 3 non-repetitive corpora from SIGHAN bakeoff 2005, they form a large-scale standard dataset for multi-criteria CWS benchmark. We repeated our experiments on these 8 corpora and compared our results with state-of-the-art scores, as listed in Table 4.

In the first block for single-criterion learning, we can see that our implementation is generally more effective than Chen et al. (2017)’s. In the second block for multi-criteria learning, this disparity becomes even significant. And we further verified that every dataset benefit from our joint-learning solution. We also find that more data, even annotated with different standards or from different domains, brings better performance. Almost every dataset benefits from the larger scale of data. In comparison with large datasets, tiny datasets gain more performance growth.

In this paper, we have presented a practical way to train multi-criteria CWS model. This simple and elegant solution only needs adding two artificial tokens at the beginning and ending of input sentence to specify the required target criterion. All the rest of model architectures, hyper-parameters, parameters and feature space are shared across all datasets. Experiments showed that our multi-criteria model can transfer knowledge between differently annotated corpora from heterogeneous domains. Our system is highly end-to-end, capable of learning large-scale datasets, and outperforms the latest state-of-the-art multi-criteria CWS works.

Our effective and elegant multi-criteria learning solution can be applied to sequence labeling tasks such as POS tagging and NER. We plan to conduct more experiments of using our effective technique in various application domains.