Deep neural networks are over-parameterized, which implies that the number of parameters are much larger than the number of samples used to train the network. Even in such a regime deep architectures do not overfit. This phenomenon is an active area of research and many theories have been proposed trying to understand this peculiar observation. These include the Vapnik Chervonenkis (VC) dimension bounds and Rademacher complexity bounds which show that the capacity of the network is characterized by the norm of weights rather than the number of parameters. However, the effect of input noise on these measures for shallow and deep architectures has not been studied. In this paper, we analyze the effects of various regularization schemes on the complexity of a neural network which we characterize with the loss, L_2 norm of the weights, Rademacher complexities (Directly Approximately Regularizing Complexity-DARC1), VC dimension based Low Complexity Neural Network (LCNN) when subject to varying degrees of Gaussian input noise. We show that L_2 regularization leads to a simpler hypothesis class and better generalization followed by DARC1 regularizer, both for shallow as well as deeper architectures. Jacobian regularizer works well for shallow architectures with high level of input noises. Spectral normalization attains highest test set accuracies both for shallow and deeper architectures. We also show that Dropout alone does not perform well in presence of input noise. Finally, we show that deeper architectures are robust to input noise as opposed to their shallow counterparts. 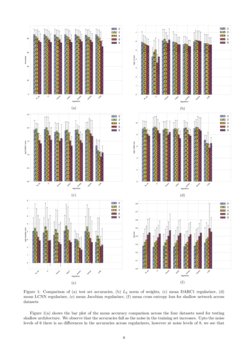 Deep convolutional neural networks have recently become the de-facto approach for feature construction and classification in computer vision. With applications from image classification for object recognition

. Their impressive performance on a variety of tasks have made them immensely applicable to a variety of applications, including transfer learning

[10, 11]. The widespread general applicability of deep neural network architectures such as Residual Networks [5], Inception models [3] and Wide Resnet [12] have made them popular recognition architectures for various applications.

The generalization properties of deep neural networks have been studied in great depth over the last few years. This has further resulted in their widespread adaptation into real world scenarios. Moreover, coupled with popular regularization methods such as Batch Normalization

[13], Dropout [14] and L2-Regularization these models have been able to achieve significant improvements in accuracies by further reducing the generalization errors. Recent works in this area have led to new distribution dependent regularization priors such as direct regularization of model complexity [15] and taking a bounded spectral norm of the network’s Jacobian matrix in the neighbourhood of the training sample [16]. While each of these methods solves a unique problem, we seek to look at the overall model in terms of the network complexity and its relative accuracies on a test set.

The goal of this study is to identify an empirically backed strong regularizer that can reduce the complexity of the network by resulting in smaller weights and perform equally well in the presence of input noise. By comparing the accuracies on a hold out dataset we also show that the effects of regularization vary greatly across these different methods. TO best of our knowledge this is the first such study of regularization methods in deep learning under complexity bounds and varying input noise. Our primary contribution lies in demonstrating strong experimental evidence in favor of certain regularizers over the others. We show that deep networks are robust in presence of input noise and

L2 norm acts as a proxy for model complexity of neural networks. We also show that distribution dependent DARC1 regularizer and L2 regularizer perform well in presence of input noise in the training set since the network tends to prefer a simpler hypothesis to get better test set accuracies on a clean noise-free test set.

The paper is divided into 5 sections. Section 2 introduces pre-requisites to generalization error and presents a brief mathematical background of various measures of complexities and regularizers. Section 3 discusses the experimental settings used in the paper along with the results on accuracies and various notions of model complexities and techniques to control the complexities like L2 norm, DARC1 norm, Dropout, Jacobian norm and Spectral regularization. Section 4 presents insights and key findings obtained from the experiments Finally Section 5 presents conclusions and future line of research.

In this section, we describe the background, measures of complexities and the regularizers that control the model complexity of the neural network. Firstly, we present various notations used in the paper in the Table 1.

The goal in machine learning is to minimize the expected risk

R[fA(Sm)]. However, the expected risk being non-computable, we aim to minimize the computable empirical risk denoted by ^RSm[fA(Sm)]. The generalization gap is given by:

A major drawback of this approach is the dependence of fA(Sm) on the same dataset Sm used in the definition of ^RSm. One way to tackle this is to considering the worst-case gap for functions in the hypothesis space.

A union bound over all the elements of the hypothesis class yields a vacuous bound, hence we consider other quantities to characterize the complexity of F namely, Vapnik-Chervonenkis (VC) dimension [17, 18] and Rademacher Complexity [19, 20, 21]. If the codomain of the loss is given by ℓ∈[0,1], for any δ>0

where, Rm(LF) is the Rademacher Complexity of LF, which can then be bounded by Rademacher complexity of F denoted as Rm(F). Similar bounds can be found in the literature using VC dimension, fat shattering dimension and covering numbers. We now highlight the various bounds for a neural network in the next subsection.

2.1 Measures of Complexities of a Neural Network

Consider a deep net with H layers A1,A2,…AH and output margin γ on training set Sm. Various generalization bounds proposed in the literature are mentioned in the Table 2. The term ρ

denotes the number of parameters of a multilayered feed forward neural network.

We now briefly describe various regularizers used in neural networks namely, L2 norm, dropout, jacobian, DARC1 and spectral normalization. We study the behavior of these regularizers in presence of varying input noise. In doing so, we characterize the complexity of network by the L2 norm of the parameters and DARC1 Rademacher bound.

The following section describes the experimental settings and results by varying the input noise.

In this paper we analyze various regularizers and their effect on input noise. We characterize the complexity required by each network with different regularizers as the noise in the input increases. Following Arora et al. [30], we find that deep nets are noise-stable. However, shallow nets are not as is evident from the results.

We describe the experimental settings used in the paper. To begin with, we add a class specific gaussian noise to each input example in the training set while the validation and test set remained unchanged.

be the standard deviation of the training points belonging to class i. To each sample of class i in training set, we add a zero mean unit variance Gaussian noise scaled by

ηi and a noise level. The noise level ranges from 0 to 1.2 in steps of 0.2. The procedure to generate noisy datasets is described in the Algorithm 1.

The shallow network was trained separately with the seven different regularizers viz. no regularization, L2 norm, DARC1 norm, LCNN norm, Dropout, Jacobian and Spectral normalization. The deep network was trained with the aforementioned regularizers. We tuned each network on the validation set and report the results on the test set for the best hyperparameter setting.

For the shallow conv net we used the hyperparameter settings mentioned in the Table 3.

For the deep network, we used the hyperparameters mentioned in the Table 4:

We show results on 5 datasets in this paper. We experimented with two neural network architectures, one shallow convolutional net (with three layers) for datasets 1 to 4 and one deep (Wide Resnet 28-10) for dataset 5 (CIFAR 10). The datasets are described in the Table 5.

We compare test set accuracies, log2 L2 norm, DARC1 norm and loss for each datasets. Firstly, we present the results for shallow conv net and thereafter show the results for a Wide Resnet 28-10 on CIFAR10 dataset.

Figure 0(b) shows the mean log2 scaled L2 norms obtained for the shallow architecture. We observe that the network with L2 regularization results in smallest L2 norm. For network without regularization, DARC1, LCNN regularization we find that the L2 norm decreases as the noise increases, however for Dropout, Jacobian, Spectral and L2 regularization we observe an increase in L2 norm initially and then a decline. The latter trend is more pronounced in case of L2 norm. This is indicative of the fact that with slight increase in noise, the model increases its complexity at first to fir the noise, but as the noise increases to a larger extent, the model reduces its complexity to fit the non-noisy validation set. Similar trends are observed for DARC1 regularizer (fig. 0(c)), LCNN regularizer (fig. 0(d)) and Jacobian regularizer (fig. 0(e)). Since, LCNN is an upper bound on DARC1, the graphs have a similar trend.

We now show the results of these regularizers on a deeper architecture (Wide Resnet 28-10) trained on an image dataset. For this experiment we varied the noise levels from 0 to 8 in steps of 2.

Figure 1(a) shows the accuracies obtained as the noise ratio increases for various regularization techniques. We observe that dropout results in a non-robust graph, where the accuracy drops sharply as noise increases earlier and then increases with noise. Spectral normalization results in the highest set of accuracies and is not affected by noise. For other methods such there is no appreciable drops in accuracies as the noise increases, thus validating the hypothesis that deep neural nets are robust to input noise.

Figure 1(b) shows the log2 L2 norm. We see that for L2 regularization, the L2 norm is the smallest, followed by spectral norm. The L2 norm in case of L2 is orders of magnitude smaller than the rest, despite having comparable accuracies. This is indicative of the fact that deeper architectures have high model complexities which be controlled using L2 norm.

Figure 1(f) shows the cross entropy loss variation with noise. The loss is inversely related to the accuracy (fig. 1(a)). The loss is high for network with only Dropout as regularizer. The loss is minimal for LCNN norm, followed by Spectral normalization and L2 norm.

From the results we can obtain the following insights:

In this paper we presented a study on the effect of regularization of model complexity and generalization as the noise in the inputs x∈X increases. We find multiple notions of model complexities in the literature ranging from distribution independent VC dimension bounds for neural networks [18, 22] to distribution dependent Rademacher complexity bounds [19, 21, 23, 20]. All these bounds are in terms of product or sum of norm of weights of the network. We used sum of L2 norm of the weights as proxy for model complexity. This directly translates to adding a weight decay regularizer that penalizes larger weights. Recently proposed DARC1 or LCNN regularizer are a step in generating a distribution dependent bounds for neural networks. We see the both L2 and DARC1 controls the model complexity.

The experiments clearly demonstrate that the L2 norm is best suited for controlling model complexity as well as for generating solutions with high accuracies. For deeper networks Dropout alone does not result in higher accuracies or control the model complexity in terms of the norm of weights. We also see that the newly proposed distribution dependent DARC1 and LCNN regularization performs equally well as L2 regularization. Spectral normalization results in one of the best results for deeper architectures, due to stable gradient propagation. Our experiments also show that deep neural networks are more generally more robust to varying degrees of Gaussian input noise than shallow architectures and can therefore effectively model any number of such distributions under strong priors. In future, we shall explore novel regularization schemes like shakedrop [32] and shake-shake regularization [33]