To evaluate the cyclic behavior under different loading conditions using the kinematic and isotropic hardening theory of steel, a Chaboche viscoplastic material model is employed. The parameters of a constitutive model are usually identified by minimization of the distance between model response and experimental data. However, measurement errors and differences in the specimens lead to deviations in the determined parameters. In this article, the Choboche model is used and a stochastic simulation technique is applied to generate artificial data which exhibit the same stochastic behavior as experimental data. Then the model parameters are identified by applying an estimation using Bayes's theorem. The Gauss-Markov-Kalman filter using functional approximation is introduced and employed to estimate the model parameters in the Bayesian setting. Identified parameters are compared with the true parameters in the simulation, and the efficiency of the identification method is discussed. In the end, the effect of the load path on parameter identification is investigated. 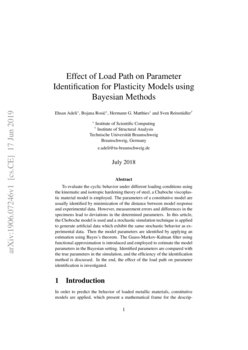 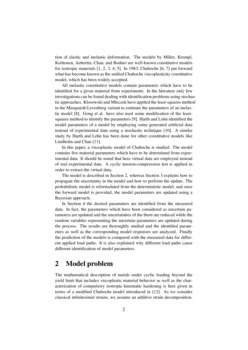 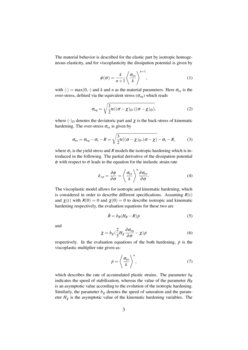 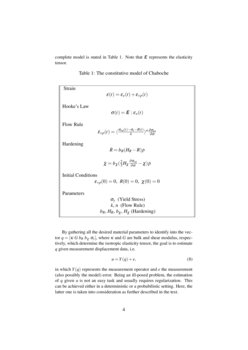 Parameter identification in elasto-plasticity: distance between parameters and impact of measurement errors

Inspection of ratcheting models for pathological error sensitivity and overparametrization

In order to predict the behavior of loaded metallic materials, constitutive models are applied, which present a mathematical frame for the description of elastic and inelastic deformation. The models by Miller, Krempl, Korhonen, Aubertin, Chan, and Bodner are well-known constitutive models for isotropic materials [1, 2, 3, 4, 5]. In 1983, Chaboche [6, 7] put forward what has become known as the unified Chaboche viscoplasticity constitutive model, which has been widely accepted.

All inelastic constitutive models contain parameters which have to be identified for a given material from experiments. In the literature only few investigations can be found dealing with identification problems using stochastic approaches. Klosowski and Mleczek have applied the least-squares method in the Marquardt-Levenberg variant to estimate the parameters of an inelastic model [8]. Gong et al. have also used some modification of the least-squares method to identify the parameters [9]. Harth and Lehn identified the model parameters of a model by employing some generated artificial data instead of experimental data using a stochastic technique [10]. A similar study by Harth and Lehn has been done for other constitutive models like Lindholm and Chan [11].

The model is described in Section 2, whereas Section 3 explains how to propagate the uncertainty in the model and how to perform the update. The probabilistic model is reformulated from the deterministic model, and once the forward model is provided, the model parameters are updated using a Bayesian approach.

The mathematical description of metals under cyclic loading beyond the yield limit that includes viscoplastic material behavior as well as the characterization of compulsory isotropic-kinematic hardening is here given in terms of a modified Chaboche model introduced in [12]. As we consider classical infinitesimal strains, we assume an additive strain decomposition. The material behavior is described for the elastic part by isotropic homogeneous elasticity, and for viscoplasticity the dissipation potential is given by

with ⟨⋅⟩=max(0,⋅) and k and n as the material parameters. Here σex is the over-stress, defined via the equivalent stress (σeq) which reads

where (⋅)D denotes the deviatoric part and χ is the back-stress of kinematic hardening. The over-stress σex is given by

where σy is the yield stress and R models the isotropic hardening which is introduced in the following. The partial derivative of the dissipation potential ϕ with respect to σ leads to the equation for the inelastic strain rate

respectively. In the evaluation equations of the both hardening, ˙p is the viscoplastic multiplier rate given as:

q=[κ G bR bχ σy], where κ and G are bulk and shear modulus, respectively, which determine the isotropic elasticity tensor, the goal is to estimate q given measurement displacement data, i.e.

in which Y(q) represents the measurement operator and e the measurement (also possibly the model) error. Being an ill-posed problem, the estimation of q given u is not an easy task and usually requires regularization. This can be achieved either in a deterministic or a probabilistic setting. Here, the latter one is taken into consideration as further described in the text.

By using additional (prior) knowledge on the parameter set next to the observation data, the probabilistic approach regularizes the problem of estimating q with the help of Bayes’s theorem

in which the likelihood L(u|q) describes how likely the measurement data are given prior knowledge πq(q). This in turn requires the reformulation of the deterministic model into a probabilistic one, and hence the propagation of material uncertainties through the model —the so-called forward problem— in order to obtain the likelihood [13, 14].

The main difficulty in using Equation (9

) lies in the computation of the likelihood. Various numerical algorithms can be applied, the most popular example of which are the Markov chain Monte Carlo methods. Being constructed on the fundamentals of ergodic Markov theory, these methods are characterized by very slow convergence. To avoid this, an approximate method based on Kolmogorov’s definition of conditional expectation as already presented in

be modeled as random variables on a probability space

S:=L2(Ω,B,P). Here, Ω denotes the space of elementary events ω, B is the σ-algebra and P stands for the probability measure. This alternative formulation of Bayes’s rule can be achieved by expressing the conditional probabilities in Equation (9) in terms of conditional expectation. Following the mathematical derivation in [15, 17, 16, 18], this approach boils down to a quadratic minimization problem by considering the forecast random variable qf and the update of the forecast random variable qa:

where PQsn is the orthogonal projection operator of qf onto the space of the new information Qsn:=Q⊗Sn in which the space Sn is the space of random variables generated by the measurement u=Y(q)+e. Due to the Doob-Dynkin lemma, ¯q|z is a function of the observation, where uf(ω)=Y(q(ω))+e(ω) is the forecast, and the assimilated value is qa(ω)=qf(ω)+(Ξ(^z)−Ξ(uf(ω))).

Constraining the space of all functions Ξ to the subspace of linear maps, the minimization problem in Equation (10) leads to a unique solution K. Note that the projection is performed over a smaller space than Qsn. An implication of this is that available information is not completely used in the process of updating, introducing an approximation error. This gives an affine approximation of Equation (10)

also known as a linear Bayesian posterior estimate or the so-called Gauss-Markov-Kalman filter (GMKF). Here, qf represents the prior random variable, qa is the posterior approximation, uf=Y(qf(ω))+e(ω) is the predicted measurement and K represents the very well-known Kalman gain

which can be easily evaluated if the appropriate covariance matrices Cqfuf, Cuf and Cε are known.

In this light the linear Bayesian procedure can be reduced to a simple algebraic method. Starting from the functional representation of the prior

where ψα are multivariate Hermite polynomials, and by considering the proxy in Equation (13), one may discretize Equation (11) as:

The identification of the material constants in the Chaboche unified viscoplasticity model is a reverse process, here based on virtual data. In case of the Chaboche model the best way of parameter identification is using the results of the cyclic tests, since more information can be obtained from cyclic test rather than creep and relaxation tests, specifically information regarding hardening parameters. The aim of the parameter identification is to find a parameter vector q introduced in the previous section. The bulk modulus (κ), the shear modulus (G), the isotropic hardening coefficient (bR), the kinematic hardening coefficient (bχ) and the yield stress (σy) are considered as the uncertain parameters of the constitutive model.

Considering the parameters listed in Table 2, the related σ-ϵ hysteretic graph obtained for the applied force case 1 and 2 which can be seen in Fig. 3 and Fig. 4, respectively.

The displacements of one of the nodes on the front surface in normal and in plane directions are observed as the virtual data in this study. Applying the Gauss-Markov-Kalman filter with functional approximation as explained in the previous chapter and introducing measurement error in such a way that 15 percent of mean values are equal to the coefficient of variation for the related parameter, the probability density function (PDF) of prior and posterior of the identified parameters can be seen in Fig.

5 and Fig. 6 for the first and second case, respectively.

and the mean and standard deviation of the estimated parameters,

qmest and qstdest respectively, for both cases are compared in Table 3.

4.1 Discussion of the results

From the sharpness of the posterior PDF of κ, G and σy, it can be concluded that enough information from virtual data is received and updating the parameters considering their uncertainty is done very properly for the both cases, as the standard deviation of the residual uncertainty is below 1% of the mean.

One reason that can be mentioned is that the process is not always in the states that hardening equations are involved like the elastic states. Therefore less information from the whole simulation can be analyzed for estimating the hardening parameters and updating their parameters’ uncertainties. Fig. 7 and Fig. 8 prove this fact that since more states are out of the von Mises yield criterion for the second case compared to the first case, in which the hardening equations are involved only in these states, the better identification can be done for the second case, where a gradually varying increasing applied force is considered, for hardening parameters in comparison with the first case where a constant magnitude applied force is employed. In fact, the cyclic applied force in the second case causes the more activation of the desired parameters in the studied set of equations comparing to the first case and accordingly a better determination of the parameters can be carried out for the second case. It should be pointed out that the von Mises yield criterion is illustrated by the green cylinder in the mentioned figures i.e. inside and outside of the cylinder respectively refer to the elasticity and plasticity states, respectively. Also the blue color represents the principal stresses in these figures.

. The other conclusion that can be made is that the more information we receive, the better parameter identification we can do using the Gauss-Markov-Kalman filter method. This fact is observed by comparing the posterior probability density functions of hardening parameters,

bR and bχ , for case 1 and 2. Therefore in terms of mechanical models, it should be always considered that the applied force should be applied in such a way that all time all equations should be involved. In other words, the applied load path should lead to activation of all uncertain parameters in the set of equations, as here a cyclic gradually varying increasing applied force leads to a better determination of the parameters. Otherwise only the parameters which are in the involved equations are updated.

Acknowledgement This work is partially supported by the DFG through GRK 2075.