Effect of context in swipe gesture-based continuous authentication on smartphones

This work investigates how context should be taken into account when performing continuous authentication of a smartphone user based on touchscreen and accelerometer readings extracted from swipe gestures. The study is conducted on the publicly available HMOG dataset consisting of 100 study subjects performing pre-defined reading and navigation tasks while sitting and walking. It is shown that context-specific models are needed for different smartphone usage and human activity scenarios to minimize authentication error. Also, the experimental results suggests that utilization of phone movement improves swipe gesture-based verification performance only when the user is moving. 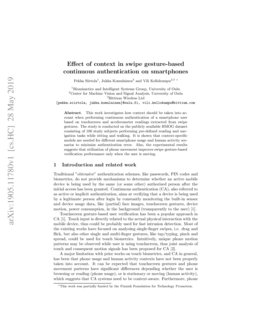 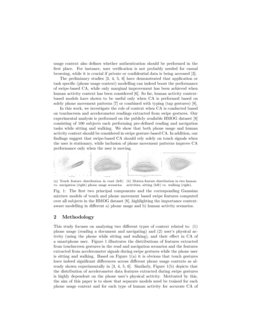 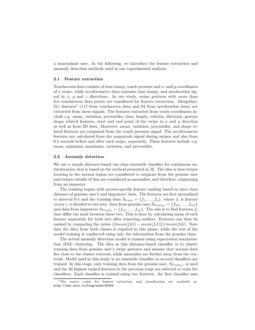 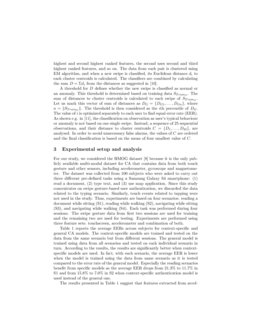 Traditional ”obtrusive” authentication schemes, like passwords, PIN codes and biometrics, do not provide mechanisms to determine whether an active mobile device is being used by the same (or some other) authorized person after the initial access has been granted. Continuous authentication (CA), also referred to as active or implicit authentication, aims at verifying that a device is being used by a legitimate person after login by constantly monitoring the built-in sensor and device usage data, like (partial) face images, touchscreen gestures, device motion, power consumption, in the background (transparently to the user) [1].

. Touch input is directly related to the actual physical interaction with the mobile device, thus could be probably used for fast intrusion detection. Most of the existing works have focused on analysing single-finger swipes, i.e. drag and flick, but also other single and multi-finger gestures, like tap/typing, pinch and spread, could be used for touch biometrics. Intuitively, unique phone motion patterns may be observed while user is using touchscreen, thus joint analysis of touch and consequent motion signals has been proposed for CA

A major limitation with prior works on touch biometrics, and CA in general, has been that phone usage and human activity contexts have not been properly taken into account. It can be expected that touchscreen gestures and phone movement patterns have significant differences depending whether the user is browsing or reading (phone usage), or is stationary or moving (human activity), which suggests that CA systems need to be context-aware. Furthermore, phone usage context also defines whether authentication should be performed in the first place. For instance, user verification is not probably needed for casual browsing, while it is crucial if private or confidential data is being accessed [3].

The preliminary studies [3, 4, 5, 6] have demonstrated that application or task specific (phone usage context) modelling can indeed boost the performance of swipe-based CA, while only marginal improvement has been achieved when human activity context has been considered [6]. So far, human activity context-based models have shown to be useful only when CA is performed based on solely phone movement patterns [7] or combined with typing (tap gestures) [8].

In this work, we investigate the role of context when CA is conducted based on touchscreen and accelerometer readings extracted from swipe gestures. Our experimental analysis is performed on the publicly available HMOG dataset [8] consisting of 100 subjects each performing pre-defined reading and navigation tasks while sitting and walking. We show that both phone usage and human activity context should be considered in swipe gesture-based CA. In addition, our findings suggest that swipe-based CA should rely solely on touch signals when the user is stationary, while inclusion of phone movement patterns improve CA performance only when the user is moving.

This study focuses on analysing two different types of context related to: (1) phone usage (reading a document and navigating) and (2) user’s physical activity (using the phone while sitting and walking), and their effect in CA of a smartphone user. Figure 1

1(a) it is obvious that touch gestures have indeed significant differences across different phone usage contexts as already shown experimentally in [3, 4, 5, 6]. Similarly, Figure 1(b)

depicts that the distribution of accelerometer data features extracted during swipe gestures is highly dependent on the phone user’s physical activity. Motivated by this, the aim of this paper is to show that separate models need be trained for each phone usage context and for each type of human activity for accurate CA of a smartphone user. In the following, we introduce the feature extraction and anomaly detection methods used in our experimental analysis.

Touchscreen data consists of time stamp, touch pressure and x- and y-coordinates of a swipe, while accelerometer data contains time stamp, and acceleration signal in x, y and z directions. In our study, swipe gestures with more than five touchscreen data points are considered for feature extraction. Altogether, 211 features111The source codes for feature extraction and classification are available at: http://www.oulu.fi/bisg/node/40364 (117 from touchscreen data and 94 from acceleration data) are extracted from these signals. The features extracted from touch coordinates include e.g. mean, variation, percentiles, time, length, velocity, direction, gesture shape related features, start and end point of the swipe in x and y direction as well as from 2D data. Moreover, mean, variation, percentiles, and shape related features are computed from the touch pressure signal. The accelerometer features are calculated from the magnitude signal during swipes and also from 0.5 seconds before and after each swipe, separately. These features include e.g. mean, minimum, maximum, variation, and percentiles.

[9]. The idea is that swipes locating in the normal region are considered to originate from the genuine user and swipes outside of this are considered as anomalies, and therefore, originating from an impostor.

The training begins with person-specific feature ranking based on inter-class distance of genuine user’s and impostors’ data. The features are first normalized to interval 0-1 and the training data Strain={f1,…,fn}, where fi

i, is divided to two sets: data from genuine user STrainG={f1G,…,fnG} and data from impostors STrainI={f1I,…,fnI}. The aim is to find features fi

that differ the most between these two. This is done by calculating mean of each feature separately for both sets after removing outliers. Features can then be ranked by comparing the ratios

(∥mean(fiG)−mean(fiI)∥)/mean(fiG). Note that the data from both classes is required in this phase, while the rest of the model training is conducted using only the information from the genuine class.

The actual anomaly detection model is trained using expectation maximization (EM) clustering. The idea in this distance-based classifier is to cluster training data from genuine user’s swipe gestures and assume that normal data lies close to the cluster centroid, while anomalies are further away from the centroid. Model used in this study is an ensemble classifier so several classifiers are trained. In this stage, only training data from the genuine user,

A threshold for D defines whether the new swipe is classified as normal or an anomaly. This threshold is determined based on training data STrainG. The sum of distances to cluster centroids is calculated to each swipe of STrainG. Let us mark this vector of sum of distances as DG ={DG1,…,DGn}, where n=∥STrainG∥. The threshold is then considered as the ith percentile of DG. The value of i is optimized separately to each user to find equal error rate (EER). As shown e.g. in [11], the classification on observation as user’s typical behaviour or anomaly is not based on one single swipe. Instead, a sequence of 25 sequential observations, and their distance to cluster centroids C={D1,…,D25}, are analysed. In order to avoid unnecessary false alarms, the values of C are ordered and the final classification is based on the mean of four smallest value of C.

For our study, we considered the HMOG dataset [8] because it is the only publicly available multi-modal dataset for CA that contains data from both touch gesture and other sensors, including accelerometer, gyroscope and magnetometer. The dataset was collected from 100 subjects who were asked to carry out three different pre-defined tasks using a Samsung Galaxy S4 smartphone: (1) read a document, (2) type text, and (3) use map application. Since this study concentrates on swipe gesture-based user authentication, we discarded the data related to the typing scenario. Similarly, touch events related to tapping were not used in the study. Thus, experiments are based on four scenarios: reading a document while sitting (S1), reading while walking (S2), navigating while sitting (S3), and navigating while walking (S4). Each task was performed during four sessions. The swipe gesture data from first two sessions are used for training and the remaining two are used for testing. Experiments are performed using three feature sets: touchscreen, accelerometer and combination of both.

The results presented in Table 1 suggest that features extracted from acceleration signals are advised to be used only if user is physically active. In fact, it can be seen from Table 1 that the best EER for sitting scenarios are obtained using only touchscreen features while the best EERs for walking scenarios are obtained using fusion of touch and motion features. The results depict also that navigation scenario is more difficult than reading scenario from CA point of view. The main reason for this is that the navigation scenario contains swipes to different directions while in reading scenario swipes are mainly vertical. In fact, we conducted an additional experiment with S3 data where horizontal swipes were removed. The EER for touch features dropped from 21.5% to 17.2%, which suggests that vertical swipes contain more unique variations among the subjects.

This study investigated the role of context in swipe gesture-based continuous authentication. It was shown that both phone usage and human activity scenarios affect how the user is interacting with the device. Therefore, not only different applications or tasks require their own specific model but different human activities as well. According to the experiments, only touch features should be used for swipe-based verification if the user is stationary and combination of features extracted from touchscreen and accelerometer signals when the user is moving.

We plan to extend our work from laboratory conditions into unconstrained real-world scenarios where context information is not available. In general, the phone usage context can be determined based on the currently running foreground application, while we believe that the human activity context can be estimated using pre-trained models