In many applications, different populations are compared using data that are sampled in a biased manner. Under sampling biases, standard methods that estimate the difference between the population means yield unreliable inferences. Here we develop an inference method that is resilient to sampling biases and is able to control the false positive errors under moderate bias levels in contrast to the standard approach. We demonstrate the method using synthetic and real biomarker data. 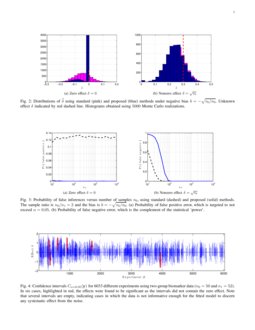 In many applications of statistical inference, the aim is to compare data from different populations. Specifically, given n0 and n1

y0 and y1, the target quantity is often the difference between their means, denoted δ, which we call the effect. For instance, in randomized trials and A/B testing, the data are outcomes from two populations and δ is the average causal effect of assigning subjects to a test group ‘1’ as compared to a control group ‘0’. [1, 2] The standard approach is to use the difference between sample averages in each group, viz. ˆδ=¯¯¯y1−¯¯¯y0, where ¯¯¯yi=1⊤yi/ni

ˆδ can be obtained using Welch’s method, which employs an approximating t-distribution [3, 4, 5].

Ideally, the samples from both groups are representative of their target populations. Then the bias of the estimator,

is zero. However, in nonideal conditions with finite samples this is not the case, e.g., when some units of the intended populations are less likely to be included than others. Under such conditions, b decreases with sample sizes n0 and n1 but will nevertheless be nonzero. Sampling biases increase the risk of inferring spurious effects when using standard inference methods.

In this paper, we develop an inference method that is resilient to sampling biases. In contrast to the standard approach, the proposed method reduces the risk of reporting spurious effect estimates and is capable of controlling the false positive errors under moderate biases. The method relies on an effect estimator using a fully automatic and data-adaptive regularization. We demonstrate its performance on both synthetic and real data.

Code for the method can be found at https://github.com/dzachariah/two-groups-data

We model the dataset as

. We model the effect as a random variable, where different ranges of values of

have different probabilities. To achieve resilliance to sampling biases, we adopt a conservative approach in which nonexistant or negligible effects are considered to be more probable. Specifically, we employ the following model:

where λ is an unknown parameter.

Our aim is to derive a confidence interval Cα(y) that contains the unknown δ with a coverage probability of at least 1−α. That is,

The confidence interval is to be centered on an estimator ˆδ(y) and should be resilient to sampling biases. That is, even if b≠0 the interval must not indicate nonzero effects with a probability greater than α. Fig. 1 illustrates the ability of the method proposed below to ensure (3) under a range of biases, provided b does not greatly exceed the dispersion of sample averages, i.e., √vi/ni.

We will derive a confidence interval using model (1) and (2), with nuisance parameters

Let Eθ[δ|y] be the conditional mean of the effect given the data. Using an estimate ˆθ of the nuisance parameters, we propose the following effect estimator

where we introduce the variable ρ≡λ/v1 that can be interpreted as a signal-to-noise ratio [7].

When the systematic error of ˆδ(y) is invariant with respect to θ, then the mean-squared error over all possible effects and data is bounded as follows E[|δ−ˆδ(y)|2]≥c2θ, where

When using an efficient estimator that attains the bound (5), the interval in (6) satifies the specified coverage probability (3).

Interestingly, the problem (9) can be solved by a one-dimensional numerical search. Begin by defining the variables

Note that γ≥0. Then the following result holds.

The estimated variances are given by

which are ensured to be nonnegative, and ˆλ=ˆρˆv1, where

All variables in (10)-(12) are functions of the mean μ, whose estimate ˆμ is obtained by minimizing the one-dimensional function

By plugging in ˆμ, ˆρ, ˆv0 and ˆv1 into (4) and (6), we obtain estimates ˆδ(y) and Cα(y), respectively. We note that the overall mean μ is fitted to the data in a nonstandard manner using (13), which yields a fully automatic and data-adaptive regularization of the effect estimator (4). If the minimizing ˆμ is such that β<α, then the estimated signal-to-noise ratio is ˆρ=0. In this case, the method indicates that the data is not sufficiently informative to discriminate any systematic difference from noise. Consequently, ˆδ(y) collapses to zero and Cα(y)=∅, indicating a case in which the effect cannot be reliably inferred.

We demonstrate the proposed inference method using both synthetic and real data.

We generate two-group data using the model (1) and add a negative bias b to the test group, using the setup parameters described in Fig. 1. The adaptive regularization of ˆδ is illustrated in Fig. 2: when the unknown effect is nonexistent, δ=0, the estimates are concentrated at zero, despite the bias b. As δ exceeds the dispersion of the sample averages, however, the regularized and standard estimators become nearly identical.

We report a significant effect estimate when a nonempty interval Cα(y) excludes the zero effect. Fig. 3 illustrates the ability of the proposed method to control the false positive error probability as n0 increases, in contrast to the standard method. This is achieved while incurring a loss of statistical power that vanishes as the number of samples increases.

We now consider real data from n0=50 healthy individuals and n1=52 individuals with prostate cancer [8, 9]. The data contains 6033 different biomarker responses. The inferred effects are shown in Fig. 4. For 6 markers, the effects were found to be significant at the α=0.05 level. By contrast, the standard approach using Welch’s t-intervals yields 478 genes, but the inferences are less reliable under sampling biases.

We developed a method for inferring effects in two-group data that, unlike the standard approach, is resilient to sampling biases. The method is able to control the false positive errors under moderate bias levels and its performance was demonstrated using both synthetic and real biomarker data.

-a The derivation of the Cramér-Rao bound

The mean-square error can be decomposed as

where ¯¯¯δ is the conditional mean. Next, define the score function and the information matrix,

Since the marginal pdf is Gaussian, we can compute J using Slepian-Bangs formula [10]. It has a block diagonal form

Let g≜Ey[ϕ(¯¯¯δ−ˆδ)] denote the correlation between the score function and estimation error. Then we have the general bound

In our case, we obtain

where the fourth line follows under the constant bias assumption. Inserting this expression for g in (18) yields

-B The derivation of the confidence interval

Thus Pr{δ∈Cα(y)}≥1−α when the estimator is efficient.

-C The derivation of the concentrated cost

Problem (9) can be formulated equivalently as the minimization of:

is inserted back to yield a concentrated cost function

Next, using the Sherman-Morrison and matrix determinant lemmas we can reparametrize f1 as

where we dropped the subindices for notational convenience.

To find the minimizing ρ≥0, we first consider the stationary point of

Taking the derivative with respect to ρ, yields the following condition for a stationary point:

By evaluating the second derivative at this point, we verify that it is a minimum. Inserting (12) back into (25) and combining with (23), we can write (21) in the concentrated form (13) after omitting irrelevant constants.