Despite the importance of handwritten numeral classification, a robust and effective method for a widely used language like Arabic is still due. This study focuses to overcome two major limitations of existing works: data diversity and effective learning method. Hence, the existing Arabic numeral datasets have been merged into a single dataset and augmented to introduce data diversity. Moreover, a novel deep model has been proposed to exploit diverse data samples of unified dataset. The proposed deep model utilizes the low-level edge features by propagating them through residual connection. To make a fair comparison with the proposed model, the existing works have been studied under the unified dataset. The comparison experiments illustrate that the unified dataset accelerates the performance of the existing works. Moreover, the proposed model outperforms the existing state-of-the-art Arabic handwritten numeral classification methods and obtain an accuracy of 99.59 validation phase. Apart from that, different state-of-the-art classification models have studied with the same dataset to reveal their feasibility for the Arabic numeral classification. Code available at http://github.com/sharif-apu/EdgeNet. 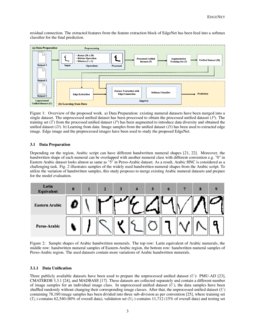 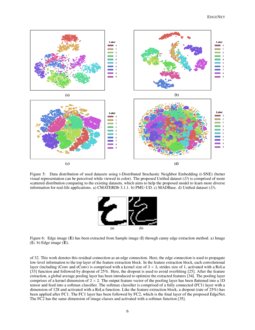 No neural coreference resolver for Arabic exists, in fact we are not awa...
Abdulrahman Aloraini, et al. ∙

Calligraphy is an essential part of the Arabic heritage and culture. It ...
Zaid Alyafeai, et al. ∙

Audio is one of the most used way of human communication, but at the sam...
Sahar Al Ajmi, et al. ∙

Handwritten numeral classification (HNC) is one of the most prominent research areas in computer vision for several decades. HNC is considered as a sub-field of optical character recognition (OCR) and aims to convert handwritten images into computer readable texts

[1]. In general, HNC has several real-life applications such as reading passports, recognize license-plates, sort postal mails, process bank cheques, and address book identification [2]. Considering the importance of HNC, a noticeable amount of research works has been conducted on Arabic script.

Arabic is known to be the fourth most widely used language script with more than 422 million native speakers. It is being used as an official language in more than twenty-six countries [3]. Unfortunately, existing Arabic HNC methods are still inefficient compared to the classification methods of other language scripts [4, 5]. Existing Arabic HNC methods are not optimized due to two main reasons. First, the recent Arabic HNC works are focused on homogeneous data samples [5]. Performance evaluation of these methods in diverse data samples is still due. Second, the recent works [6, 7] used stacked CNN inspired by LeNet [8]. However, it is well known that the network architecture with the residual connection can accelerate the classification performance for even complex data samples [9]. Moreover, performance evaluation of the existing state-of-the-art network architectures like VGG, ResNet, DenseNet etc. in Arabic HNC is still unexplored.

The limitations of the existing work have inspired this study to propose a robust and effective method for Arabic HNC. Here, robust and effective are defined as learning from diverse data samples and utilizing available knowledge with an efficient deep model. Hence, this work proposes to unify the existing Arabic numeral datasets and augment them for data diversity (robust) followed by a novel deep network with the low-level features (edge) as residual connection (effective). Particularly, edge information has been used in different computer vision applications such as object detection [10]

[14], etc. So far, none of the existing HNC works utilize the edge features as residual connection [9]. The proposed model with edge connection is refereed as EdgeNet in this study.

This study contributes to the Arabic HNC as follows:

According to the classification approaches, the Arabic HNC works can be divided into three basic categories: 1) Handcrafted features with a linear classifier, 2) Deep Learning, and 3) Hybrid Approach.

used a Gabor-based features extraction and applied to an SVM for ANC. With their method, they had achieved a validation accuracy of 97.94% on a private dataset containing 21,120 image samples. In another study,

In recent years, the convolutional neural network (CNN) has outperformed the handcrafted feature extraction based methods for HNC. Particularly, LeNet had demonstrated a significant improvement over handcrafted feature based classification methods. Following the trend,

[6] applied LeNet for Arabic HNC and used the same dataset as [16] used in their method. They outperformed their previous study with deep learning and achieved an accuracy of 88.00%. In the following year, [18]

utilized deep autoencoder on the same dataset and set new benchmark results with 98.50 % validation accuracy. At the same year,

[7] also applied a stacked CNN on another public dataset containing 3000 data sample. Unfortunately, due to the lack of training samples, they were unable to outperform other deep learning based methods and obtained a classification result of 97.40 %. However, in follow up study, [19] had introduced data augmentation and significantly increased trainable parameters. Subsequently, the model was able to demonstrate a satisfactory improvement over the previous approaches and obtained a validation accuracy of 99.40%. To the best concern, this method used data augmentation for the first time in ANC. However, their method is questionable due to a large number of trainable parameters. It has been suspected to suffer from an overfitting phenomenon due to lack of insufficient training samples.

Hybrid Approach. Apart from the previous two categories, a hybrid approach has been adopted by [20]

. Moreover, they had combined restricted Boltzmann machine (RBM) and CNN for Arabic HNC. They had used the same dataset as

Despite the potential capability of edge feature as a residual connection, the recent methods on Arabic HNC are still focusing on stacked CNN. Moreover, existing works are focused on a specific type of data samples. Their conservative approaches restrict them to obtain maximum performance. Thus, this study focuses on overcoming the limitation of the existing works with a robust and effective HNC method. Moreover, the various state-of-the-art classification networks have also been studied for finding their feasibility for a widely used language script like Arabic.

Depending on the region, Arabic script can have different handwritten numeral shapes [21, 22]. Moreover, the handwritten shape of each numeral can be overlapped with another numeral class with different convention e.g. "0" in Eastern Arabic dataset looks almost as same as "5" in Perso-Arabic dataset. As a result, Arabic HNC is considered as a challenging task. Fig. 2 illustrates samples of the widely used handwritten numeral shapes from the Arabic script. To utilize the variation of handwritten samples, this study proposes to merge existing Arabic numeral datasets and prepare for the model evaluation.

Edge feature and residual connection are two different useful techniques to accelerate performance of a deep model [13]. This study proposes to use an edge feature as residual connection for Arabic HNC. Hence, the edge image (E) has been extracted from a sample image (I). Moreover, the proposed EdgeNet has been feed with an input set (K) as K={I,E}. It allows the proposed model to learn two different kinds of information simultaneously.

[13]. The output of Conv3 layer is concatenated with low-level edge feature (eConv) as residual connection and fed into another convolutional layer with feature depth of 32. This work denotes this residual connection as an edge connection. Here, the edge connection is used to propagate low-level information to the top layer of the feature extraction block. In the feature extraction block, each convolutional layer (including iConv and eConv) is comprised with a kernel size of 3×3

, strides size of 1, activated with a ReLu

[33] function and followed by dropout of 25%. Here, the dropout is used to avoid overfitting [25]. After the feature extraction, a global average pooling layer has been introduced to optimize the extracted features [34]. The pooling layer comprises of a kernel dimension of 2×2

. The output feature vector of the pooling layer has been flattened into a 1D tensor and feed into a softmax classifier. The softmax classifier is comprised of a fully connected (FC1) layer with a dimension of 128 and activated with a ReLu function. Like the feature extraction block, a dropout (rate of 25%) has been applied after FC1. The FC1 layer has been followed by FC2, which is the final layer of the proposed EdgeNet. The FC2 has the same dimension of image classes and activated with a softmax function

The trainable parameters of a deep model can be calculated with the following equation [36]:

) for the cross-validation. The learning rate of 0.001 has been selected to control the gradient steps. The batch size has been fixed to 128 and trained for 100 epochs. Adadelta

optimizer has been applied to optimize the categorical cross entropy losses. In the later section, the different variants of the proposed model have experimented for the justification with the same hyperparameters (please see section 4.1 for details). All experiment has been conducted on a machine running on Ubuntu 16.04.6 with a hardware configuration of 24GB random-access memory (RAM) and Intel core i7-7700 central processing unit (CPU). A Titan-XP graphical accelerated processing unit (GPU) has been utilized to accelerate the learning process.

The proposed EdgeNet has been justified with different experiments and compared with existing Arabic HNC works. Finally, the feasibility of the state-of-the-art network architecture from different classification application has been studied for the Arabic HNC.

The different variants of proposed EdgeNet have been studied by modifying parameters such as data representation, edge extraction method, and removing edge connection. However, the overall architecture of EdgeNet has been remained unchanged. Table. 2 shows the experiments with EdgeNet variants. Here, EdgeNetWC, EdgeNetSE, EdgeNetID, and EdgeNetLog denote the variants of EdgeNet, which denote without edge connection, Sobel edge extraction method, inverse data, and Laplacian of Gaussian (LoG) edge extraction method respectively. The experimental results illustrate that precise shape extraction through canny edge method and propagation of low-level features through edge connection help the proposed EdgeNet to outperform other variants. Moreover, it has obtained the maximum accuracy of 99.59% in the validation phase. Fig. 8 and Fig. 9

As Table. 3 demonstrates, the proposed method outperforms the existing works in both validation and testing phase. It achieved a validation and testing accuracy of 99.59% and 99.50% respectively. The data diversity of unified dataset (\mathnormalD) accelerates the performance of the existing methods as well. In both validation and testing phase, the existing methods surpassed their reported results. Particularly, [6] method demonstrate a significant improvement (more than 11%) over their reported result with the unified dataset (\mathnormalD) due to optimized performance of LeNet. The experiment results also justify that the deep model outperformed the handcrafted feature extraction based methods in a diverse data collection. The deep models are consistent in the testing phase as well. In exception, [19] method does not demonstrate validation improvement on unified dataset (\mathnormalD) due to a large number of training parameters (4,977,290) and apparent overfitted.

In this study, a novel approach for Arabic handwritten numeral classification has been proposed. The existing benchmark datasets have been unified and extended with augmentation. It allows this study to introduce data diversity. Finally, a deep network with edge connection has been proposed. The experimental results demonstrate that the proposed model with edge connection can outperform the existing state-of-the-art methods for the unified dataset. In the validation phase, the proposed EdgeNet achieved a classification accuracy of 99.59%. The feasibility of state-of-the-art network architectures is also studied for Arabic HNC. It has been found that different network architectures like VGG, DenseNet, ResNet, Inception etc. can outperform existing Arabic HNC methods. In addition, the proposed EdgeNet can outperform those network architectures without introducing a massive number of trainable parameters. In the foreseeable future, EdgeNet will be studied for more complex data distribution.