EASYFLOW: Keep Ethereum Away From Overflow

While Ethereum smart contracts enabled a wide range of blockchain applications, they are extremely vulnerable to different forms of security attacks. Due to the fact that transactions to smart contracts commonly involve cryptocurrency transfer, any successful attacks can lead to money loss or even financial disorder. In this paper, we focus on the overflow attacks in Ethereum , mainly because they widely rooted in many smart contracts and comparatively easy to exploit. We have developed EASYFLOW , an overflow detector at Ethereum Virtual Machine level. The key insight behind EASYFLOW is a taint analysis based tracking technique to analyze the propagation of involved taints. Specifically, EASYFLOW can not only divide smart contracts into safe contracts, manifested overflows, well-protected overflows and potential overflows, but also automatically generate transactions to trigger potential overflows. In our preliminary evaluation, EASYFLOW managed to find potentially vulnerable Ethereum contracts with little runtime overhead. 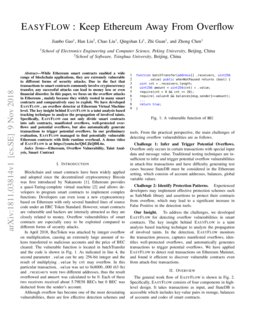 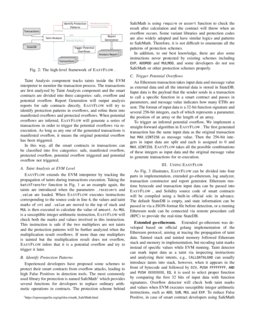 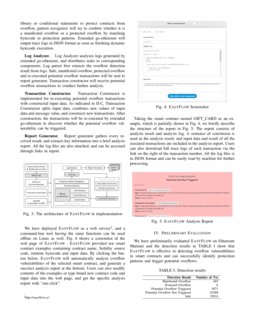 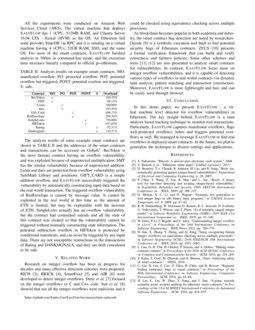 Blockchain and smart contracts have been widely applied and adopted since the decentralized cryptocurrency Bitcoin was first introduced by Nakamoto[1]. Ethereum provides a quasi-Turing-complete virtual machine[2] and allows developers to program smart contracts to implement complex functions. Developers can even issue a new cryptocurrency based on Ethereum with only several hundred lines of source code under an ERC Token Standard. However, smart contracts are vulnerable and hackers are intensely attracted as they are closely related to money. Overflow vulnerabilities of smart contracts are especially easy to be exploited compared to different forms of security attacks.

In April 2018, BecToken was attacked by integer overflow on multiplication, causing an extremely large amount of tokens transferred to malicious accounts and the price of BEC cleared. The vulnerable function is located in batchTransfer and the code is shown in Fig. 1. As indicated in line 4, the second parameter _value can be any 256-bit integer and the result of multiplying _value by cnt may overflow. In this particular transaction, _value was set to 0x8000…000 (63 0s) and _receivers were two different addresses, thus the result overflowed and amount was calculated to be 0. Each of these two receivers received about 5.79E58 BECs but 0 BEC was deducted from the sender’s account.

Although overflow has become one of the most devastating vulnerabilities, there are few effective detection schemes and tools. From the practical perspective, the main challenges of detecting overflow vulnerabilities are as follows.

Challenge 1: Infer and Trigger Potential Overflows.  Overflow only occurs in certain transactions with special input data and message value. Traditional testing techniques are insufficient to infer and trigger potential overflow vulnerabilities in attack-free transactions and have difficulty generating test cases because StateDB must be considered in the Ethereum setting, which consists of account addresses, balances, global variable values.

Challenge 2: Identify Protection Patterns.  Experienced developers may implement effective protection schemes such as SafeMath library and assertions to protect their contracts from overflow, which may lead to a significant increase in False Positive in the detection tools.

Our Insight.  To address the challenges, we developed EasyFlow for detecting overflow vulnerabilities in smart contracts. The key insight behind EasyFlow is a taint analysis based tracking technique to analyze the propagation of involved taints. In the detection, EasyFlow monitors the transaction process, captures manifested overflows, identifies well-protected overflows, and automatically generates transactions to trigger potential overflows. We have applied EasyFlow to detect real transactions on Ethereum Mainnet, and found it efficient to discover vulnerable contracts even from attack-free transactions.

The general work flow of EasyFlow is shown in Fig. 2. Specifically, EasyFlow consists of four components in high-level design. It takes transactions as input, and StateDB is accessible which includes key-value pairs in storage, balances of accounts and codes of smart contracts.

EasyFlow extends the EVM interpreter by tracking the propagation of taints during transactions execution. Taking the batchTransfer function in Fig. 1 as an example again, the taints are introduced when the parameters _receivers and _value are loaded. When EasyFlow executes instructions corresponding to the source code in line 4, the values and taint marks of cnt and _value are moved to the top of stack and MUL is then executed to calculate the value of amount. As MUL is a susceptible integer arithmetic instruction, EasyFlow will check both the marks and values involved in this instruction. This instruction is safe if the two multipliers are not taints and the protection patterns will be further analyzed when the multiplication result overflows. If more than one multipliers is tainted but the multiplication result does not overflow, EasyFlow infers that it is a potential overflow and try to trigger it later.

Experienced developers have proposed some schemes to protect their smart contracts from overflow attacks, leading to high False Positives in detection tools. The most commonly used library for protection is named SafeMath111https://openzeppelin.org/api/docs/math_SafeMath.html which provides several functions for developers to replace ordinary arithmetic operations in contracts. The protection scheme behind SafeMath is using require or assert function to check the result after calculation and the contract will throw when an overflow occurs. Some variant libraries and protection codes are also widely adopted and have similar logics and patterns to SafeMath. Therefore, it is not difficult to enumerate all the patterns of protection schemes.

In addition, to our best knowledge, there are also some instructions never protected by existing schemes including EXP, ADDMOD and MULMOD, and some developers do not use SafeMath or other protection schemes properly.

An Ethereum transaction takes input data and message value as external data and all the internal data is stored in StateDB. Input data is the payload that the sender sends in a transaction to call a specific function in a smart contract and passes in parameters, and message value indicates how many ETHs are sent. The format of input data is a 32-bit function signature and several 256-bit integers, each of which represents a parameter, the position of an array or the length of an array.

As Fig. 3 illustrates, EasyFlow can be divided into four parts in implementation, extended go-ethereum, log analyzer, transaction constructor and report generator. Ethereum runtime bytecode and transaction input data can be passed into EasyFlow , and Solidity source code of smart contracts will be compiled using a built-in official solc in advance. The default StateDB is empty, and state information can be passed in via a JSON-format file before detection, or a running Ethereum node can be connected via remote procedure call (RPC) to provide the real-time StateDB.

Extended go-ethereum.  Extended go-ethereum was developed based on official golang implementation of the Ethereum protocol, aiming at tracing the propagation of taint data. Tainted stack and tainted memory followed Ethereum stack and memory in implementation, but recoding taint marks instead of specific values while EVM running. Taint detector can mark input data as a taint via inspecting instructions and analyzing their intents, e.g., CALLDATALOAD can usually introduce taints into stack, however, when it appears in the front of bytecode and followed by DIV, PUSH FFFFFFFF, AND and PUSH XXXXXXXX, EQ, it is used to select proper function by comparing the first 32 bits of input data with function signatures. Overflow detector will check both taint marks and values when EVM executes susceptible integer arithmetic instructions, such as ADD, SUB, MUL and EXP. To reduce False Positive, in case of smart contract developers using SafeMath library or conditional statements to protect contracts from overflow, pattern recognizer will try to confirm whether it is a manifested overflow or a protected overflow by matching bytecode to protection patterns. Extended go-ethereum will output trace logs in JSON format as soon as finishing dynamic bytecode execution.

Report Generator.  Report generator gathers every received result, and extracts key information into a brief analysis report. All the log files are also attached, and can be accessed through links in report.

We have deployed EasyFlow as a web service222http://easyflow.cc/, and a command-line tool having the same functions can be used offline on Linux as well. Fig. 4 shows a screenshot of the web page of EasyFlow . EasyFlow provided ten smart contract examples containing contract name, Solidity source code, runtime bytecode and input data. By clicking the button below, EasyFlow will automatically analyze overflow vulnerabilities of the selected smart contract, and generate a succinct analysis report at the bottom. Users can also modify contents of the examples or type brand new contract code and input data into the web page, and get the specific analysis report with "one-click".

Taking the smart contract named GIFT_CARD as an example, which is partially shown in Fig. 4, we briefly describe the structure of the report in Fig. 5. The report consists of analysis result and analysis log. A sentence of conclusion is used as the analysis result, and input data and result of all the executed transactions are included in the analysis report. Users can also download full trace logs of each transaction via the link on the right of the transaction number. All the log files is in JSON format and can be easily read by machine for further processing.

We have preliminarily evaluated EasyFlow on Ethereum Mainnet and the detection results in TABLE I show that EasyFlow is effective in detecting overflow vulnerabilities in smart contracts and can successfully identify protection patterns and trigger potential overflows.

All the experiments were conducted on Amazon Web Services Cloud (AWS). The virtual machine that deploys EasyFlow has 1 vCPU, 512MB RAM, and Ubuntu Server 16.04 LTS - Xenial (HVM) as the OS. An Ethereum full node provides StateDB via RPC and it is running on a virtual machine having 4 vCPUs, 32GB RAM, SSD, and the same OS. For most of the smart contracts, EasyFlow finished analysis in 300ms in command-line mode, and the execution time increases linearly compared to official go-ethereum.

The analysis results of some example smart contracts are shown in TABLE II and the addresses of the smart contracts and transactions can be accessed on Github333https://github.com/Jianbo-Gao/EasyFlow/tree/master/taint-realworld. BecToken is the most famous contract having an overflow vulnerability, and was exploited because of unprotected multiplication. SMT has the similar vulnerability because of unprotected addition. Lizun and darx are protected from overflow vulnerability using SafeMath Library and assertions. GIFT_CARD is a simple addition overflow, and EasyFlow successfully triggered the vulnerability by automatically constructing input data based on the real-world transaction. The triggered overflow vulnerability of RedEnvelope is caused by message value. It cannot be exploited in the real world at this time as the amount of ETH is limited, but may be exploitable with the increase of ETH. SimpleLotto actually has an overflow vulnerability, but the contract had committed suicide and all the state of this contract was cleared so that the vulnerability cannot be triggered without manually constructing state information. The potential subtraction overflow in HBToken is protected by conditional statements, and can never be triggered by any input data. There are not susceptible instructions in the transactions of Rating and DANKSIGNALS, and they are both considered to be safe.

As blockchain becomes popular in both academia and industry, the smart contract bug detection are noted by researchers. Oyente[9] is a symbolic execution tool built to find potential security bugs of Ethereum contracts. ZEUS[10] presents a formal verification framework that can build and verify correctness and fairness policies. Some other schemes and tools [11][12] are also presented to analyze smart contracts for vulnerabilities. In contrast, EasyFlow

focus more on integer overflow vulnerabilities, and it is capable of detecting various types of overflows in real-world contracts via dynamic taint analysis, pattern matching and transaction construction. Moreover,

EasyFlow is more lightweight and fast, and can be easily used through browser.

In this demo paper, we present EasyFlow , a virtual machine level detector for overflow vulnerabilities in Ethereum. The key insight behind EasyFlow is a taint analysis based tracking technique to monitor real transactions. Particularly, EasyFlow captures manifested overflows, flags well-protected overflows, infers and triggers potential overflows as well. We managed to leverage EasyFlow to find real overflows in deployed smart contracts. In the future, we plan to generalize the technique to diverse settings and applications.