Ear-Slicing for Matchings in Hypergraphs

We study when a given edge of a factor-critical graph is contained in a matching avoiding exactly one, pregiven vertex of the graph. We then apply the results to always partition the vertex-set of a 3-regular, 3-uniform hypergraph into at most one triangle (hyperedge of size 3) and edges (subsets of size 2 of hyperedges), corresponding to the intuition, and providing new insight to triangle and edge packings of Cornuéjols' and Pulleyblank's. The existence of such a packing can be considered to be a hypergraph variant of Petersen's theorem on perfect matchings, and leads to a simple proof for a sharpening of Lu's theorem on antifactors of graphs. 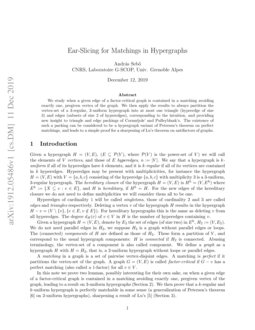 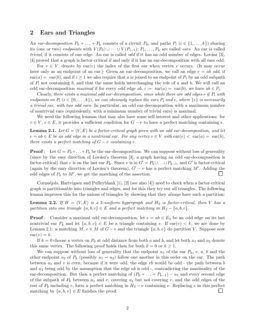 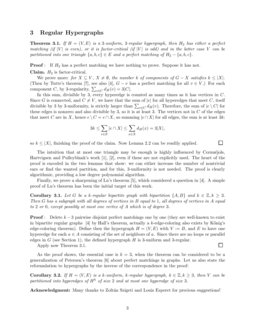 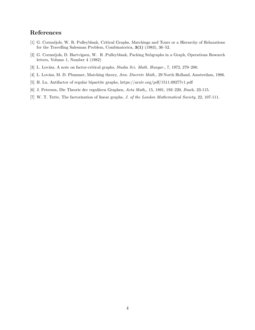 A matching in a graph is a set of pairwise vertex-disjoint edges. A matching is perfect if it partitions the vertex-set of the graph. A graph G=(V,E) is called factor-critical if G−v has a perfect matching (also called a 1-factor) for all v∈V.

In this note we prove two lemmas, possibly interesting for their own sake, on when a given edge of a factor-critical graph is contained in a matching avoiding exactly one, pregiven vertex of the graph, leading to a result on 3-uniform hypergraphs (Section 2). We then prove that a k-regular and k-uniform hypergraph is perfectly matchable in some sense (a generalization of Petersen’s theorem [6] on 2-uniform hypergraphs), sharpening a result of Lu’s [5] (Section 3).

if it has an odd number of edges. Lovász

[3], [4] proved that a graph is factor-critical if and only if it has an ear-decomposition with all ears odd.

For v∈V, denote by ear(v) the index of the first ear when vertex v occurs. (It may occur later only as an endpoint of an ear.) Given an ear-decomposition, we call an edge e=ab odd, if ear(a)= ear(b), and if i≥1 we also require that a is joined to an endpoint of Pi by an odd subpath of Pi not containing b, and that the same holds interchanging the role of a and b. We will call an odd ear-decomposition maximal if for every odd edge ab, i:= ear(a)= ear(b), we have ab∈Pi.

We need the following lemmas that may also have some self-interest and other applications: for v∈V, e∈E, it provides a sufficient condition for G−v to have a perfect matching containing e.

Proof : Let G=P0+…+Pk be the ear-decomposition. We can suppose without loss of generality (since by the easy direction of Lovász’s theorem [3], a graph having an odd ear-decomposition is factor-critical) that e is on the last ear Pk. Since v is in G′=P0∪…∪Pk−1, and G′ is factor-critical (again by the easy direction of Lovász’s theorem), G′−v has a perfect matching M′. Adding the odd edges of Pk to M′, we get the matching of the assertion.

Cornuéjols, Hartvigsen and Pulleyblank [1], [2] (see also [4]) need to check when a factor-critical graph is partitionable into triangles and edges, and for this they try out all triangles. The following lemma improves this for the unions of triangles by showing that they always have such a partition:

If H=(V,E) is a 3-uniform hypergraph and H2 is factor-critical, then V has a partition into one triangle {a,b,c}∈E and a perfect matching in H2−{a,b,c}.

Proof : Consider a maximal odd ear-decomposition, let e=ab∈E2 be an odd edge on its last nontrivial ear Pk and let {a,b,v}∈E be a triangle containing e. If ear(v)<k, we are done by Lemma 2.1: a matching M, e∈M of G−v and the triangle {a,b,v} do partition V. Suppose now ear(v)=k.

If k=0 choose a vertex on P0 at odd distance from both a and b, and let both u1 and u2 denote this same vertex. The following proof holds then for both k=0 or k≥1.

We can suppose without loss of generality that the endpoint u1 of the ear Pk, v, a, b and the other endpoint u2 of Pk (possibly u1=u2) follow one another in this order on the ear. The path between u1 and v is even, because if it were odd, the edge vb would be odd - the path between b and u2 being odd by the assumption that the edge ab is odd -, contradicting the maximality of the ear-decomposition. But then a perfect matching of (P0+…+Pk−1)−u1 and every second edge of the subpath of Pk between u1 and v, covering u1 but not covering v, and the odd edges of the rest of Pk including e, form a perfect matching in H2−v containing e. Replacing e in this perfect matching by {a,b,v}∈E finishes the proof.

Proof : If H2 has a perfect matching we have nothing to prove. Suppose it has not.

so k≤|X|, finishing the proof of the claim. Now Lemma 2.2 can be readily applied.

The intuition that at most one triangle may be enough is highly influenced by Cornuéjols, Hartvigsen and Pulleyblank’s work [1], [2], even if these are not explicitly used. The heart of the proof is encoded in the two lemmas that show: we can either increase the number of nontrivial ears or find the wanted partition, and for this, 3-uniformity is not needed. The proof is clearly algorithmic, providing a low degree polynomial algorithm.

Proof : Delete k−3 pairwise disjoint perfect matchings one by one (they are well-known to exist in bipartite regular graphs  [4] by Hall’s theorem, actually a k-edge-coloring also exists by Kőnig’s edge-coloring theorem). Define then the hypergraph H=(V,E) with V:=B, and E to have one hyperedge for each a∈A consisting of the set of neighbors of a. Since there are no loops or parallel edges in G (see Section 1), the defined hypergraph H is 3-uniform and 3-regular.

As the proof shows, the essential case is k=3, when the theorem can be considered to be a generalization of Petersen’s theorem [6] about perfect matchings in graphs. Let us also state the reformulation to hypergraphs by the inverse of the correspondence in the proof:

Acknowledgment: Many thanks to Zoltán Szigeti and Louis Esperet for precious suggestions!