We extend the notion of anti-unification to cover equational theories and present a method based on regular tree grammars to compute a finite representation of E-generalization sets. We present a framework to combine Inductive Logic Programming and E-generalization that includes an extension of Plotkin's lgg theorem to the equational case. We demonstrate the potential power of E-generalization by three example applications: computation of suggestions for auxiliary lemmas in equational inductive proofs, computation of construction laws for given term sequences, and learning of screen editor command sequences. 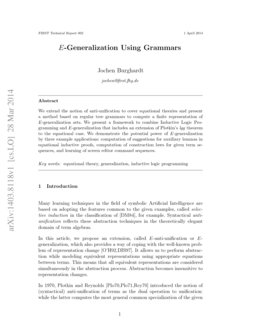 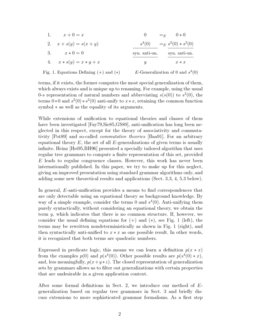 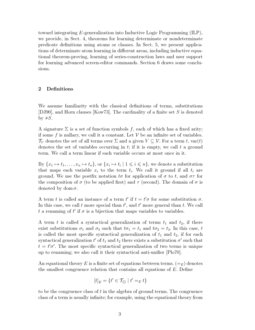 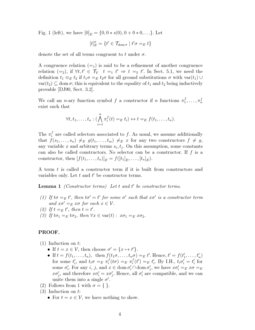 Many learning techniques in the field of symbolic Artificial Intelligence are based on adopting the features common to the given examples, called

selective induction in the classification of [DM84], for example. Syntactical anti-unification reflects these abstraction techniques in the theoretically elegant domain of term algebras.

In 1970, Plotkin and Reynolds [Plo70, Plo71, Rey70] introduced the notion of (syntactical) anti-unification of terms as the dual operation to unification: while the latter computes the most general common specialization of the given terms, if it exists, the former computes the most special generalization of them, which always exists and is unique up to renaming. For example, using the usual 0-s representation of natural numbers and abbreviating s(s(0)) to s2(0), the terms 0∗0 and s2(0)∗s2(0) anti-unify to x∗x, retaining the common function symbol ∗ as well as the equality of its arguments.

While extensions of unification to equational theories and classes of them have been investigated [Fay79, Sie85, GS89], anti-unification has long been neglected in this respect, except for the theory of associativity and commutativity [Pot89] and so-called commutative theories [Baa91]. For an arbitrary equational theory E, the set of all E-generalizations of given terms is usually infinite. Heinz [Hei95, BH96] presented a specially tailored algorithm that uses regular tree grammars to compute a finite representation of this set, provided E leads to regular congruence classes. However, this work has never been internationally published. In this paper, we try to make up for this neglect, giving an improved presentation using standard grammar algorithms only, and adding some new theoretical results and applications (Sect. 3.3, 4, 5.3 below).

In general, E-anti-unification provides a means to find correspondences that are only detectable using an equational theory as background knowledge. By way of a simple example, consider the terms 0 and s4(0). Anti-unifying them purely syntactically, without considering an equational theory, we obtain the term y, which indicates that there is no common structure. If, however, we consider the usual defining equations for (+) and (∗), see Fig. 1 (left), the terms may be rewritten nondeterministically as shown in Fig. 1 (right), and then syntactically anti-unified to x∗x as one possible result. In other words, it is recognized that both terms are quadratic numbers.

Expressed in predicate logic, this means we can learn a definition p(x∗x) from the examples p(0) and p(s4(0)). Other possible results are p(s4(0)∗x), and, less meaningfully, p(x+y∗z). The closed representation of generalization sets by grammars allows us to filter out generalizations with certain properties that are undesirable in a given application context.

After some formal definitions in Sect. 2, we introduce our method of E-generalization based on regular tree grammars in Sect. 3 and briefly discuss extensions to more sophisticated grammar formalisms. As a first step toward integrating E-generalization into Inductive Logic Programming (ILP), we provide, in Sect. 4, theorems for learning determinate or nondeterminate predicate definitions using atoms or clauses. In Sect. 5, we present applications of determinate atom learning in different areas, including inductive equational theorem-proving, learning of series-construction laws and user support for learning advanced screen-editor commands. Section 6 draws some conclusions.

We assume familiarity with the classical definitions of terms, substitutions [DJ90], and Horn clauses [Kow73]. The cardinality of a finite set S is denoted by \raisebox1.13811pt#S.

A signature Σ is a set of function symbols f, each of which has a fixed arity; if some f is nullary, we call it a constant. Let V be an infinite set of variables. \Ite\Ite\IteVTV,()T()\IteVTV()T()\Ite\IteVTV,T\IteVTVT denotes the set of all terms over Σ and a given V⊆V. For a term t, \var(t) denotes the set of variables occurring in t; if it is empty, we call t a ground term. We call a term linear if each variable occurs at most once in it.

By {x1↦t1,…,xn↦tn}, or {xi↦ti\allowbreak∣1⩽i⩽n}, we denote a substitution that maps each variable xi to the term ti. We call it ground if all ti are ground. We use the postfix notation tσ for application of σ to t, and στ for the composition of σ (to be applied first) and τ (second). The domain of σ is denoted by \domσ.

A term t is called an instance of a term t′ if t=t′σ for some substitution σ. In this case, we call t more special than t′, and t′ more general than t. We call t a renaming of t′ if σ is a bijection that maps variables to variables.

An equational theory E is a finite set of equations between terms. (=E) denotes the smallest congruence relation that contains all equations of E. Define

denote the set of all terms congruent to t under σ.

We call an n-ary function symbol f a constructor if n functions πf1,…,πfn exist such that

The πfi are called selectors associated to f. As usual, we assume additionally that f(s1,…,sn)⧸=Eg(t1,…,tm)⧸=Ex for any two constructors f≠g, any variable x and arbitrary terms si,tj. On this assumption, some constants can also be called constructors. No selector can be a constructor. If f is a constructor, then [f(t1,…,tn)]E=f([t1]E,…,[tn]E).

Each fi(Ni1,…,Nini) is called an alternative of the rule. We assume that for each nonterminal N∈N, there is exactly one defining rule in R with N as its left-hand side. As usual, the rules may be mutually recursive.

Given a grammar G and a nonterminal N∈N, the language LG(N) produced by N is defined in the usual way as the set of all ground terms derivable from N as the start symbol. We omit the index G if it is clear from the context. We denote the total number of alternatives in G by \raisebox1.13811pt#G.

In Sect. 4, we will use the following predicate logic definitions. To simplify notation, we sometimes assume all predicate symbols to be unary. An n-ary predicate p′ can be simulated by a unary p using an n-ary tupling constructor symbol and defining p(⟨t1,…,tn⟩)⇔p′(t1,…,tn).

An n-ary predicate p is called determinate wrt. some background theory B if there is some k such that w.l.o.g. each of the arguments k+1,…,n has only one possible binding, given the bindings of the arguments 1,…,k [LD94, Sect. 5.6.1]. The background theory B may be used to define p, hence p’s determinacy depends on B. Similar to the above, we sometimes write p(t1,…,tn) as a binary predicate p(⟨t1,…,tk⟩,⟨tk+1,…,tn⟩) to reflect the two classes of arguments. For a binary determinate predicate p, the relation {⟨s,t⟩∣s,t∈\Ite\Ite\Ite{}T{},()T()\Ite{}T{}()T()\Ite\Ite{}T{},T\Ite{}T{}T∧B⊨p(s,t)} corresponds to a function g. We sometimes assume that g is defined by equations from a given E, i.e. that B⊨p(s,t)↔g(s)=Et.

A clause is a finite set C={L1,…,Ln} of literals, with the meaning C⇔L1∨…∨Ln. We consider only nonredundant clauses, i.e. clauses that do not contain congruent literals. For example, {p(x+0),p(x)} is redundant if x+0=Ex. We write C1⊆EC2 if

if C2 is nonredundant, L2 is uniquely determined by L1.

We call a Horn clause

semi-determinate wrt. some background theory B if all pi are determinate wrt. B, all variables xi are distinct and do not occur in s0,   \var(si)⊆\var(s0)∪{x1,…,xi−1}, and \var(t1,…,tm)⊆\var(s0,x1,…,xn). Semi-determinacy for clauses is a slight extension of determinacy defined by [LD94, Sect. 5.6.1], as it additionally permits arbitrary predicates qi. On the other hand, [LD94] permits xi=xj for i≠j; however, pi(si,xi)∧pj(sj,xi) can be equivalently transformed into pi(si,xi)∧pj(sj,xj)∧xi=Exj.

As a first step towards computing E-generalization sets, let us weaken Def. 2 by fixing the substitutions σ1 and σ2. We will see below, in Sect. 4 and 5, that the weakened definition has important applications in its own right.

If we can represent the congruence class [t1]E and [t2]E as some regular tree language LG1(N1) and LG2(N2), respectively, we can immediately compute the set of constrained E-generalizations [t1]σ1E∩[t2]σ2E: The set of regular tree languages is closed wrt. union, intersection and complement, as well as under inverse tree homomorphisms, which cover substitution application as a special case. Figure 2 gives an overview of our method for computing the constrained set of E-generalizations of t1 and t2 wrt. σ1 and σ2 according to Def. 3:

Lifting (Lifting) Let a regular tree grammar G=⟨Σ,N,R⟩ and a ground substitution σ be given. Define Gσ:=⟨Σ∪\domσ,{Nσ∣N∈N},Rσ⟩, where each Nσ is a distinct new nonterminal, and the rules of Rσ are built as follows: For each rule N ::=mi=1fi(Ni1,…,Nini) in R include the rule Nσ into R′. Then for all N∈N and all t∈\Ite\Ite\IteVTV,()T()\IteVTV()T()\Ite\IteVTV,T\IteVTVT, we have t∈LGσ(Nσ) iff \var(t)⊆\domσ and tσ∈LG(N). The condition xσ∈LG(N) in the defining rule of Nσ is decidable. G and Gσ have the same number of nonterminals, and of rules. Each rule of Gσ may have at most \raisebox1.13811pt#\domσ more alternatives. Note that variables from \domσ occur in the grammar Gσ like constants. ∎

in the above method (cf. the dotted vectors in Fig.

2). Intuitively, we introduce one variable for each pair of congruence classes and map them to a kind of normalform member of the first and second class by τ1 and τ2, respectively.

We give below a general construction that also accounts for auxiliary nonterminals not representing a congruence class, and state the universality of τ1,τ2 in a formal way. For the sake of technical simplicity, we assume that [t1]E and [t2]E share the same grammar G; this can easily be achieved by using the disjoint union of the grammars for [t1]E and [t2]E.

Normal Form (Normal Form) Let an arbitrary tree grammar G=⟨Σ,N,R⟩ be given. A non-empty set of nonterminals N⊆N is called maximal if ⋂N∈NL(N)≠{}, but ⋂N∈N′L(N)={} for each N′⊃N. Define Nmax={N⊆N∣N≠{},\allowbreakN maximal}. Choose some arbitrary but fixed

The computation of universal substitutions is very expensive because it involves computing many tree-language intersections to determine the mappings N(⋅) and t(⋅). Assume N=Nc∪No, where Nc comprises nc nonterminals representing congruence classes and No comprises no other ones. A maximal set N may contain at most one nonterminal from Nc and an arbitrary subset of No; however, no maximal N may be a proper subset of another one. By some combinatorics, we get (nc+1)⋅(nono/2) as an upper bound on \raisebox1.13811pt#Nmax. Hence, the cardinality of \domτi is bounded by the square of that number. In our experience, no is usually small. In most applications, it does not exceed 1, resulting in \raisebox1.13811pt#\domτi⩽(nc+1)2. Computing the τi requires no+1 grammar intersections in the worst case, viz. when No∪{Nc} for some Nc∈Nc is maximal. In this case, \domτi is rather small. Since the time for testing emptiness is dominated by the intersection computation time, and (nc+1)⋅(nono/2)⩽(nc+1)⋅nno/2o⩽\raisebox1.13811pt#Gno+1, we get a time upper bound of O(\raisebox1.13811pt#Gno+1) for computing the τi.

If the grammar is deterministic, then each nonterminal produces a distinct congruence class [McA92, Sect.2], and we need compute no intersection at all to obtain τ1 and τ2. We get \raisebox1.13811pt#\domτi=\raisebox1.13811pt#N2. In this case, N(⋅), t(⋅), and v(⋅,⋅) can be computed in linear time from G. However, in general a nondeterminstic grammar is smaller in size than its deterministic counterpart.

Since the set of E-generalizations resulting from our method is given by a regular tree grammar, it is necessary to enumerate some terms of the corresponding tree language in order to actually obtain some results. Usually, there is a notion of simplicity (or weight), depending on the application <span aria-label="E" class="