This paper discusses the odds problem, proposed by Bruss in 2000, and its variants. A recurrence relation called a dynamic programming (DP) equation is used to find an optimal stopping policy of the odds problem and its variants. In 2013, Buchbinder, Jain, and Singh proposed a linear programming (LP) formulation for finding an optimal stopping policy of the classical secretary problem, which is a special case of the odds problem. The proposed linear programming problem, which maximizes the probability of a win, differs from the DP equations known for long time periods. This paper shows that an ordinary DP equation is a modification of the dual problem of linear programming including the LP formulation proposed by Buchbinder, Jain, and Singh. 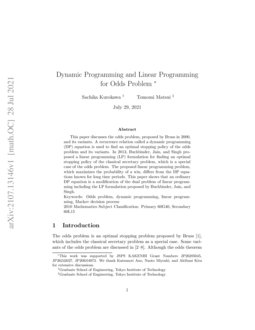 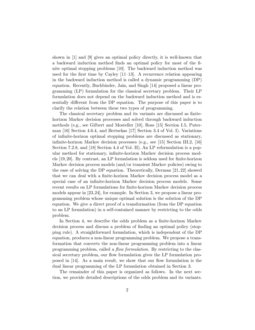 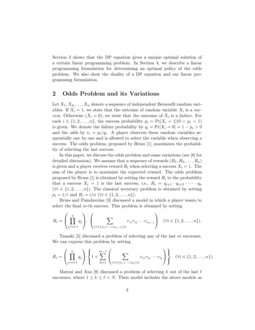 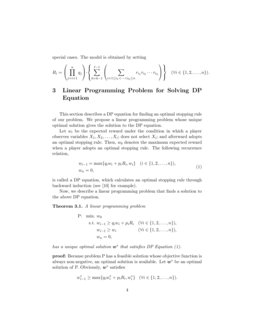 2 Odds Problem and its Variations

denote a sequence of independent Bernoulli random variables. If

Xi=1, we state that the outcome of random variable Xi is a success. Otherwise (Xi=0), we state that the outcome of Xi is a failure. For each i∈{1,2,…,n}, the success probability pi=\rm Pr[Xi=1](0<pi<1) is given. We denote the failure probability by qi=\rm Pr[Xi=0]=1−pi>0 and the odds by ri=pi/qi. A player observes these random variables sequentially one by one and is allowed to select the variable when observing a success. The odds problem, proposed by Bruss [1], maximizes the probability of selecting the last success.

In this paper, we discuss the odds problem and some variations (see [8] for detailed discussion). We assume that a sequence of rewards (R1,R2,…,Rn) is given and a player receives reward Ri when selecting a success Xi=1. The aim of the player is to maximize the expected reward. The odds problem proposed by Bruss [1] is obtained by setting the reward Ri to the probability that a success Xi=1 is the last success, i.e., Ri=qi+1⋅qi+2⋅⋯⋅qn (∀i∈{1,2,…,n}). The classical secretary problem is obtained by setting pi=1/i and Ri=i/n (∀i∈{1,2,…,n}).

Bruss and Paindaveine [3] discussed a model in which a player wants to select the final m-th success. This problem is obtained by setting

Tamaki [5] discussed a problem of selecting any of the last m successes. We can express this problem by setting

Matsui and Ano [8] discussed a problem of selecting k out of the last ℓ successes, where 1≤k≤ℓ<N. Their model includes the above models as special cases. The model is obtained by setting

This section describes a DP equation for finding an optimal stopping rule of our problem. We propose a linear programming problem whose unique optimal solution gives the solution to the DP equation.

is called a DP equation, which calculates an optimal stopping rule through backward induction (see [10] for example).

Now, we describe a linear programming problem that finds a solution to the above DP equation.

has a unique optimal solution \boldmathw∗ that satisfies DP Equation (1).

We prove that \boldmathw∗ satisfies DP Equation (1) through a contradiction. Assume that there exists an index ^i∈{1,2,…,n} that satisfies

We introduce a sufficiently small positive number ε>0 and a solution (w′0,w′1,…,w′n) defined by

From the above, \boldmathw′ is feasible to problem P. Obviously, we have w′0<w∗0, which contradicts with the optimality of \boldmathw∗. □

4 Flow Formulation and its Duality

In this subsection, we describe the odds problem as a finite-horizon Markov decision process and give a straightforward non-linear programming formulation of a problem for finding an optimal policy. We propose a transformation that converts the problem into a linear programming problem.

In this paper, we represent the record of a game using a sequence of realization values of observed random variables. For example, the record (X1,X2,X3,X4)=(1,0,0,1) indicates that the player observed four random variables X1,X2,X3,X4 and selected the success X4=1. When a player observes all random variables and fails to select one, we define a record of the game though a sequence of realization values with an additional last component 1, i.e., (X1,X2,…,Xn,1). Then, the set of all possible records, denoted by Ξ, becomes

Next, we introduce a finite-horizon Markov decision process that formulates our problem. Let φ be a state space defined by φ=C∪S, where C={c0,c1,…,cn+1} and S={s1,s2,…,sn}. The state c0 is the initial state of our process. The state cn+1 is an absorbing state called a terminal state. For each state ci(i∈{0,1,2,…,n}), we define a transition probability from ci to a state s∈φ by

π=(π1,π2,…,πn)∈[0,1]n, where πi denotes a probability that an action cont is selected at state si. Our goal is to find an optimal policy π∗ such that the expected reward is maximized.

In the following, we transform the above problem into a linear programming problem. The following theorem provides the key idea of our transformation.

Let \boldmath{y}=(y1,y2,…,yn) be an n-dimensional real vector. The following two conditions are equivalent.

There exists \boldmath{z}=(z0,z1,…,zn) such that (\boldmath{y},\boldmath{z}) satisfies the following linear inequality system:

We then have the following inequalities:

From the above, (\boldmath{y},π) is feasible to problem Q. □

By employing the above theorem, we can transform problem Q into the following linear programming problem:

We call the above a flow formulation. When we have an optimal solution to FF, Equation (3) provides an optimal policy π, which is optimal to problem Q.

The linear programming duality of FF is

Non-negativity constraints αi≥0, as shown in (8), implies the following:

Thus, the above procedure coverts problem P1 into P.

This paper described a linear programming problem whose unique optimal solution is the solution to the DP equation for the odds problem. We proposed a flow formulation that maximizes the expected reward of the odds problem based on a finite-horizon Markov decision process. Furthermore, we showed the duality of these two formulations.