Dynamic prediction of time to event with survival curves

With the ever-growing complexity of primary health care system, proactive patient failure management is an effective way to enhancing the availability of health care resource. One key enabler is the dynamic prediction of time-to-event outcomes. Conventional explanatory statistical approach lacks the capability of making precise individual level prediction, while the data adaptive binary predictors does not provide nominal survival curves for biologically plausible survival analysis. The purpose of this article is to elucidate that the knowledge of explanatory survival analysis can significantly enhance the current black-box data adaptive prediction models. We apply our recently developed counterfactual dynamic survival model (CDSM) to static and longitudinal observational data and testify that the inflection point of its estimated individual survival curves provides reliable prediction of the patient failure time. 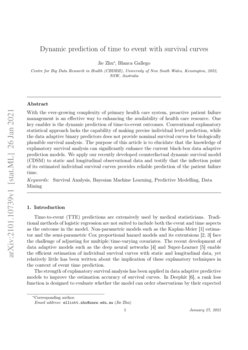 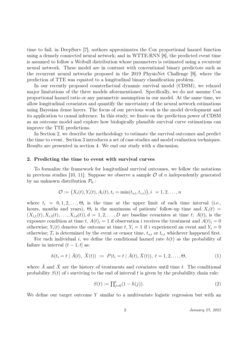 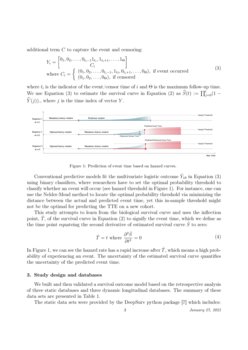 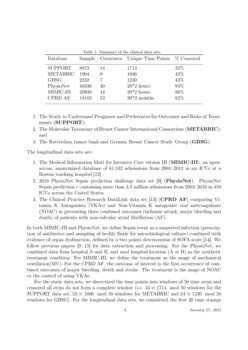 Statistical Inference on the Cure Time

Why comparing survival curves between two prognostic subgroups may be misleading

Generalized Weighted Survival and Failure Entropies and their Dynamic Versions

Time-to-event (TTE) predictions are extensively used by medical statisticians. Traditional methods of logistic regression are not suited to include both the event and time aspects as the outcome in the model. Non-parametric models such as the Kaplan-Meier

Kaplan and Meier (1958) estimator and the semi-parametric Cox proportional hazard models and its extentsions Cox (1972); Recknor and Gross (1994)

face the challenge of adjusting for multiple/time-varying covariates. The recent development of data adaptive models such as the deep neural networks

Gensheimer and Narasimhan (2019) and Super-Learner Golmakani and Polley (2020) enable the efficient estimation of individual survival curves with static and longitudinal data, yet relatively little has been written about the implication of these explanatory techniques in the context of event time prediction.

The strength of explanatory survival analysis has been applied in data adaptive predictive models to improve the estimation accuracy of survival curves. In Deephit Lee et al. (2020)

, a rank loss function is designed to evaluate whether the model can order observations by their expected time to fail; in DeepSurv

Reyna et al. (2019), where the prediction of TTE was equated to a longitudinal binary classification problem.

In our recently proposed counterfactual dynamic survival model (CDSM), we relaxed major limitations of the three models aforementioned. Specifically, we do not assume Cox proportional hazard ratio or any parametric assumption in our model. At the same time, we allow longitudinal covariates and quantify the uncertainty of the neural network estimations using Bayesian dense layers. The focus of our previous work is the model development and its application to causal inference. In this study, we fixate on the prediction power of CDSM as an outcome model and explore how biologically plausible survival curve estimations can improve the TTE predictions.

In Section 2, we describe the methodology to estimate the survival outcomes and predict the time to event. Section 3 introduces a set of case studies and model evaluation techniques. Results are presented in section 4. We end our study with a discussion.

2 Predicting the time to event with survival curves

To formalize the framework for longitudinal survival outcomes, we follow the notations in previous studies Imai and Strauss (2011); Zhu and Gallego (2020). Suppose we observe a sample O of n independently generated by an unknown distribution P0 :

where ti=0,1,2,…,Θi is the time at the upper limit of each time interval (i.e., hours, months and years), Θi is the maximum of patients’ follow-up time and Xi(t)=(Xi,1(t),Xi,2(t),…,Xi,d(t)),d=1,2,…,D are baseline covariates at time t; A(t)i is the exposure condition at time t, A(t)i=1 if observation i receives the treatment and A(t)i=0 otherwise; Yi(t) denotes the outcome at time t, Yi=1 if i experienced an event and Yi=0 otherwise; Ti is determined by the event or censor time, ts,i or tc,i whichever happened first.

For each individual i, we define the conditional hazard rate h(t)

as the probability of failure in interval

where ¯A and ¯X are the history of treatments and covariates until time t. The conditional probability S(t) of i surviving to the end of interval t

is given by the probability chain rule:

We define our target outcome Y similar to a multivariate logistic regression but with an additional term C to capture the event and censoring:

where ti is the indicator of the event/censor time of i and Θ is the maximum follow-up time. We use Equation (3) to estimate the survival curve in Equation (2) as ˆS(t):=∏tj=0(1−ˆY(j))., where j

is the time index of vector

) using binary classifiers, where researchers have to set the optimal probability threshold to classify whether an event will occur (see hazard threshold in Figure

1). For instance, one can use the Nelder-Mead method to locate the optimal probability threshold via minimizing the distance between the actual and predicted event time, yet this in-sample threshold might not be the optimal for predicting the TTE on a new cohort.

This study attempts to learn from the biological survival curve and uses the inflection point, ^T, of the survival curve in Equation (2) to signify the event time, which we define as the time point equateing the second derivative of estimated survival curve ^S to zero:

We built and then validated a survival outcome model based on the retrospective analysis of three static databases and three dynamic longitudinal databases. The summary of these data sets are presented in Table 1.

The static data sets were provided by the DeepSurv python package Katzman et al. (2018) which includes:

The longitudinal data sets are:

In both MIMIC-III and PhysioNet, we define Sepsis event as a suspected infection (prescription of antibiotics and sampling of bodily fluids for microbiological culture) combined with evidence of organ dysfunction, defined by a two points deterioration of SOFA score Seymour (2016). We follow previous papers Reyna et al. (2019); Komorowski et al. (2018) for data extraction and processing. For the PhysioNet, we combined data from hospital A and B, and used hospital location (A or B) as the synthetic treatment condition. For MIMIC-III, we define the treatment as the usage of mechanical ventilation(MV). For the CPRD AF, the outcome of interest is the first occurrence of combined outcomes of major bleeding, death and stroke. The treatment is the usage of NOAC vs the control of using VKAs.

We performed an evaluation of the estimations of survival curves and predictions of event time using the three metrics described below:

The area under the receiver operating characteristic (AUROC) and C-Index: we use AUROC and Harrell’s C-index Frank et al. (1982) to evaluate the models’ discrimination performance. Both indicators are calculated using the multivariate logistic outcome ^Y1θ in Equation (3) .

Utility distance (Distance Score): we define the distance metric to evaluate the predicted event time as:

where ^T is defined in Equation (4) and T is the true event/censoring time.

We compared following algorithms on the estimation of survival curves and the prediction of event time:

The model construction and training uses Python 3.8.0 with Tensorflow 2.3.0 and Tensorflow-Probability 0.11.0

In Table 2, we confirmed CDSM, RNN and DeepHit had similar performance on the estimation of survival curves (see the concordance index) and the prediction of event time (see the distance score) in the three static testing data sets. However, in terms of the AUROC, we noticed RNN Binary had superior performance than the others, although it had lower C-Index.

The counterfactual sub-networks and the selection bias calibration loss function in CDSM did not affect the estimation accuracy, resulting the equivalency among CDSM, RNN and DeepHit in the static non-causal survival estimations.

Similar trend was observed when we evaluated CDSM, RNN, and RNN Binary using the longitudinal databases (see the estimation data set evaluations in Table 3). However, in the corresponding testing data sets, D-Surv significantly outperformed RNN Binary, especially for the C-Index and distance score. We saw the imposition of survival outcome in Equation (3) and concordance loss functions defined in D-Surv/RNN produced nominal survival curves, where the RNN Binary only maximized the discrimination performance on the binary indicator of whether the sepsis has occurred (i.e., the estimated survival probabilities for the AF testing data set were stacked at zeros and ones as shown in Figure 2 (a)).

All metrics are averaged over 20 estimation windows using either estimation (the default) or testing data sets (specified in brackets). The best value in each metric is in bold.

The nominal survival curves by CDSM made it possible to apply Equation (4) to locate the inflection point as the event time. This is a better approach than choosing a probability threshold to construct a Binary classifier. In Figure 2 (b), we saw the error of predicted event time is sensitive to the chosen probability threshold, where the range of average timing difference was from -4.3 to 9.5 months in a small threshold range: 0.99 to 0.9999. In contrast, after applying the inflection point to determine the event time, we observed the predicted time accurately tracked the true time in Figure 2 (c), with most predictions happened ahead of the true AF event time. The average distance to from the predicted time is 1.720 months ahead of the true AF event time, while 1.014 months ahead for true AF censored time. CDSM allows the threshold-free prediction of the individual event time and early intervention on patients who might be prone to event occurrence.

This study demonstrated that injecting the knowledge of survival analysis into the design of recurrent neural network can significantly improve the prediction of time-to-event outcomes. Our proposed outcome model, CDSM fitting the joint distribution of both failure and censored observations. The conventional machine learning algorithms for binary discrimination can maximize evaluation scores such as AUROC, but failed to provide meaningful survival curves and reliable predictions of event time. The major drawback of these algorithms, as identified by our empirical study, is that they do not take account of censoring and had significant drop in accuracy when being evaluated on the testing database.

This work was supported by National Health and Medical Research Council, project grant no. 1125414.