We provide a new theoretical analysis framework to investigate online gradient descent in the dynamic environment. Comparing with the previous work, the new framework recovers the state-of-the-art dynamic regret, but does not require extra gradient queries for every iteration. Specifically, when functions are α strongly convex and β smooth, to achieve the state-of-the-art dynamic regret, the previous work requires O(κ) with κ = β/α queries of gradients at every iteration. But, our framework shows that the query complexity can be improved to be O(1), which does not depend on κ. The improvement is significant for ill-conditioned problems because that their objective function usually has a large κ. 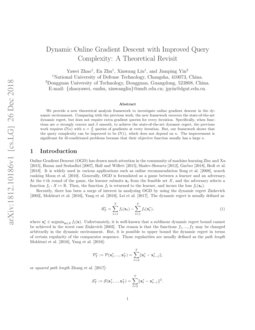 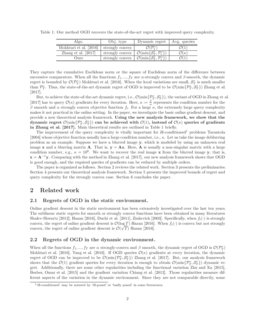 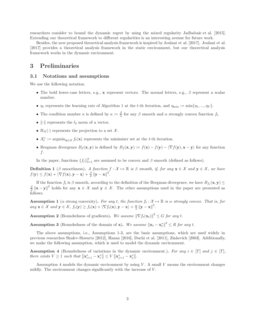 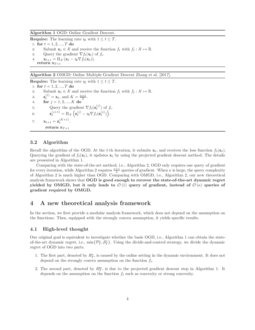 where x∗t∈\operatornamewithlimitsargminx∈Xft(x). Unfortunately, it is well-known that a sublinear dynamic regret bound cannot be achieved in the worst case Zinkevich (2003). The reason is that the functions f1,...,fT may be changed arbitrarily in the dynamic environment. But, it is possible to upper bound the dynamic regret in terms of certain regularity of the comparator sequence. Those regularities are usually defined as the path length Mokhtari et al. (2016); Yang et al. (2016):

They capture the cumulative Euclidean norm or the square of Euclidean norm of the difference between successive comparators. When all the functions f1,...,fT are α-strongly convex and β-smooth, the dynamic regret is bounded by O(P∗T) Mokhtari et al. (2016). When the local variations are small, S∗T is much smaller than P∗T. Thus, the state-of-the-art dynamic regret of OGD is improved to be O(min{P∗T,S∗T}) Zhang et al. (2017).

But, to achieve the state-of-the-art dynamic regret, i.e., O(min{P∗T,S∗T}), the variant of OGD in Zhang et al. (2017) has to query O(κ) gradients for every iteration. Here, κ:=βα represents the condition number for the β smooth and α strongly convex objective function ft. For a large κ, the extremely large query complexity makes it not practical in the online setting. In the paper, we investigate the basic online gradient descent, and provide a new theoretical analysis framework. Using the new analysis framework, we show that the dynamic regret O(min{P∗T,S∗T}) can be achieved with O(1), instead of O(κ) queries of gradients in Zhang et al. (2017). Main theoretical results are outlined in Table 1 briefly.

The improvement of the query complexity is vitally important for ill-conditioned111‘ill-conditioned’ may be notated by ‘ill-posed’ or ‘badly posed’ in some literatures. problems Tarantola (2004); Hansen et al. (2006); Marroquin et al. (1987) whose objective function usually has a large condition number, i.e., κ. Let us take the image deblurring problem as an example Hansen et al. (2006). Suppose we have a blurred image y, which is modeled by using an unknown real image x and a blurring matrix A. That is, y=Ax. Here, A is usually a non-singular matrix with a large condition number, e.g., κ=106. We want to recover the real image x from the blurred image y, that is, x=A−1y. Comparing with the method in Zhang et al. (2017), our new analysis framework shows that OGD is good enough, and the required queries of gradients can be reduced by multiple orders.

The paper is organized as follows. Section 2 reviews the related work. Section 3 presents the preliminaries. Section 4 presents our theoretical analysis framework. Section 5 presents the improved bounds of regret and query complexity for the strongly convex case. Section 6 concludes the paper.

2.1 Regrets of OGD in the static environment.

2.2 Regrets of OGD in the dynamic environment.

We use the following notation.

In the paper, functions {ft}Tt=1 are assumed to be convex and β smooth (defined as follows).

If the function ft is β smooth, according to the definition of the Bregman divergence, we have holds for any x∈X and y∈X. The other assumptions used in the paper are presented as follows.

Assumption 3 (Boundedness of the domain of x).

We assume ∥∥xt−x∗t∥∥2≤R for any t.

The above assumptions, i.e., Assumptions 1-3, are the basic assumptions, which are used widely in previous researches Shalev-Shwartz (2012); Hazan (2016); Duchi et al. (2011); Zinkevich (2003). Additionally, we make the following assumption, which is used to model the dynamic environment.

Assumption 4 (Boundedness of variations in the dynamic environment.).

Recall the algorithm of the OGD. At the t-th iteration, it submits xt

, and receives the loss function

ft(xt). Querying the gradient of ft(xt), it updates xt by using the projected gradient descent method. The details are presented in Algorithm 1.

In the section, we first provide a modular analysis framework, which does not depend on the assumption on the functions. Then, equipped with the strongly convex assumption, it yields specific results.

Our original goal is equivalent to investigate whether the basic OGD, i.e., Algorithm 1 can obtain the state-of-the-art dynamic regret, i.e., min{P∗T,S∗T}. Using the divide-and-control strategy, we divide the dynamic regret of OGD into two parts.

Generally, the dynamic regret of OGD is bounded as follows.

For any ηt>0 in Algorithm 1, the dynamic regret of OGD defined in (1) is bounded by

Note that the upper bound of RmT depends on the strongly convex assumption of the function ft.

Note that this upper bound of RoT does not depend on the strongly convex assumption of the function ft. It still holds for the convex function ft.

According to Lemma 1, when ft’s are strongly convex, 0<ρ<1 (See Lemma 1). When ft’s are just convex, ρ=1 (that is, α→0). Recall that RmT depends on the strongly convex assumption of ft’s. Equipped by Lemma 1, we find that as long as RmT is further bounded, we are able to provide an upper bound for the dynamic regret.

When all ft’s are smooth and strongly convex, the dynamic regret of our method OGD is upper bounded by the following theorem.

Suppose T∑t=1∥∥∇ft(x∗t)∥∥2=O(S∗T). According to Theorem 3, the dynamic regret of OGD is bounded by

where J1 and J2 are defined in Theorem 3.

It completes the proof.

Recall the previous method, i.e., Algorithm 2. Its dynamic regret has been proved, and we present it as follows.

Use Assumptions 1, 2, and 3, and choose ηt≤1β in Algorithm 2. Denote the dynamic regret of Algorithm 2 by ~R∗T. Then, for any constant σ>0, ~R∗T is bounded by

Comparing with Lemma 2, our new result achieves the same bound of the regret. But, OGD, i.e., Algorithm 1, only requires one query of gradient for every iteration, which does not depend on κ, and thus outperforms Algorithm 2 by reduing the query complexity significantly. The following remarks hightlight the advantages of our analysis framework.

We provide a new theoretical analysis framework to analyze the regret and query complexity of OGD in the dynamic environment. Comparing with the previous work, our framework achieves the state-of-the-art dynamic regret, and improve the required queries of gradient to be O(1).

Now, we begin to bound I1. According to Lemma 4, we obtain

After that, we begin to bound I2.

The last inequality holds because that all ft’s are β smooth. Substituting (3) and (4) into (2), we finally complete the proof. ∎

According to the cosine theorem, we have

Summing up, we obtain

\textcircled1 holds according to Assumption 4.

Combining Case 1 and Case 2, we obtain

When the function ft is α strongly convex, we have

Substituting (11) into Theorem 1, we obtain

According to the first-order optimality condition Boyd and Vandenberghe (2004), we have, for any z∈X and x∗∈X∗t,