This paper introduces sparse dynamic chain graph models for network inference in high dimensional non-Gaussian time series data. The proposed method parametrized by a precision matrix that encodes the intra time-slice conditional independence among variables at a fixed time point, and an autoregressive coefficient that contains dynamic conditional independences interactions among time series components across consecutive time steps. The proposed model is a Gaussian copula vector autoregressive model, which is used to model sparse interactions in a high-dimensional setting. Estimation is achieved via a penalized EM algorithm. In this paper, we use an efficient coordinate descent algorithm to optimize the penalized log-likelihood with the smoothly clipped absolute deviation penalty. We demonstrate our approach on simulated and genomic datasets. The method is implemented in an R package tsnetwork. 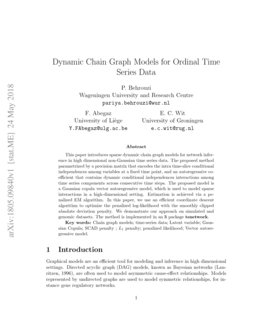 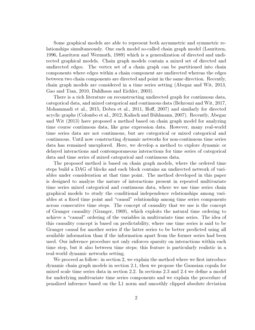 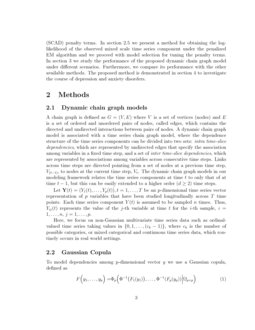 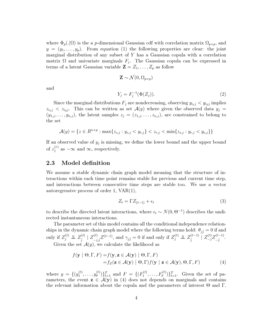 The proposed method is based on chain graph models, where the ordered time steps build a DAG of blocks and each block contains an undirected network of variables under consideration at that time point. The method developed in this paper is designed to analyze the nature of interactions present in repeated multivariate time series mixed categorical and continuous data, where we use time series chain graphical models to study the conditional independence relationships among variables at a fixed time point and “causal” relationship among time series components across consecutive time steps. The concept of causality that we use is the concept of Granger causality (Granger, 1969), which exploits the natural time ordering to achieve a “causal” ordering of the variables in multivariate time series. The idea of this causality concept is based on predictability, where one time series is said to be Granger causal for another series if the latter series to be better predicted using all available information than if the information apart from the former series had been used. Our inference procedure not only enforces sparsity on interactions within each time step, but it also between time steps; this feature is particularly realistic in a real-world dynamic networks setting.

We proceed as follow: in section 2, we explain the method where we first introduce dynamic chain graph models in section 2.1, then we propose the Gaussian copula for mixed scale time series data in section 2.2. In sections 2.3 and 2.4 we define a model for underlying multivariate time series components and we explain the procedure of penalized inference based on the L1 norm and smoothly clipped absolute deviation (SCAD) penalty terms. In section 2.5 we present a method for obtaining the log-likelihood of the observed mixed scale time series component under the penalized EM algorithm and we proceed with model selection for tuning the penalty terms. In section 3 we study the performance of the proposed dynamic chain graph model under different scenarios. Furthermore, we compare its performance with the other available methods. The proposed method is demonstrated in section 4 to investigate the course of depression and anxiety disorders.

A chain graph is defined as G=(V,E) where V is a set of vertices (nodes) and E is a set of ordered and unordered pairs of nodes, called edges, which contains the directed and undirected interactions between pairs of nodes. A dynamic chain graph model is associated with a time series chain graph model, where the dependence structure of the time series components can be divided into two sets: intra time-slice dependencies, which are represented by undirected edges that specify the association among variables in a fixed time step, and a set of inter time-slice dependencies, which are represented by associations among variables across consecutive time steps. Links across time steps are directed pointing from a set of nodes at a previous time step, V(t−1), to nodes at the current time step, Vt. The dynamic chain graph models in our modeling framework relates the time series components at time t to only that of at time t−1, but this can be easily extended to a higher order (d≥2) time steps.

Let Y(t)=(Y1(t),…,Yp(t)´),t=1,…,T be an p-dimensional time series vector representation of p variables that have been studied longitudinally across T time points. Each time series component Y(t) is assumed to be sampled n times. Thus, Yij(t) represents the value of the j-th variable at time t for the i-th sample, i=1,…,n, j=1,…,p.

Here, we focus on non-Gaussian multivariate time series data such as ordinal-valued time series taking values in {0,1,…,(ck−1)}, where ck is the number of possible categories, or mixed categorical and continuous time series data, which routinely occurs in real world settings.

To model dependencies among p-dimensional vector y we use a Gaussian copula, defined as

Since the marginal distributions Fj are nondecreasing, observing yi1j<yi2j implies zi1j<zi2j. This can be written as set A(y) where given the observed data yj=(y1,j,…,yn,j), the latent samples zj=(z1,j,…,zn,j), are constrained to belong to the set

If an observed value of yj is missing, we define the lower bound and the upper bound of z(r)j as −∞ and ∞, respectively.

We assume a stable dynamic chain graph model meaning that the structure of interactions within each time point remains stable for previous and current time step, and interactions between consecutive time steps are stable too. We use a vector autoregressive process of order 1, VAR(1),

to describe the directed latent interactions, where ϵt∼N(0,Θ−1) describes the undirected instantaneous interactions.

Given the set A(y), we calculate the likelihood as

where y={(y(t)1,…,y(t)p)}Tt=1 and F={(F(t)1,…,F(t)p)}Tt=1. Given the set of parameters, the event z∈A(y) in (2.3) does not depends on marginals and contains the relevant information about the copula and the parameters of interest Θ and Γ. We drop the second term in (2.3) because this term does not provide any information about intra and inter time-slice dependencies. As Hoff (2007) proposes we use fZ(z∈A(y) | Θ,Γ) as the rank likelihood,

which its density for t-th observation is defined as

In Gaussian copula, we treat the marginals distributions as nuisance parameters since our main goal is to learn the dependence structure among time series components both at a fixed time step t∈N and also across consecutive time steps. We use an empirical marginal cdf ˆFj=nn+1n∑i=11n1(yij≤y) (Genest et al., 1995) to estimate marginals.

Genetic time series data often are high dimensional due to a large number of variables that are measured on small number of samples across only few time steps. Furthermore, many real-world networks (e.g. genetic, genomics, and brain networks) are intrinsically sparse. Thus, incorporating sparsity into the proposed dynamic chain graph model makes the derived model more biologically plausible. Accordingly, we propose a dynamic chain graph model for genetic data based on the penalized likelihood. In order to find the penalized maximum likelihood estimation we will use the EM algorithm (Green, 1990). This modeling technique provides sparse estimates of the autoregressive coefficient matrix Γ and the precision matrix Θ in (3) which are used to reconstruct inter and intra time-slice conditional independences, respectively.

The E-step of the EM algorithm is given by

Under the assumption described in (6), the E-step can be written as

such that conditional expectation at current time, Scc, and at past, Spp, is defined as

and the conditional expectation at inter time-slice dependence is

they can be computed through the second moment

When j≠j′ the off-diagonal elements of Scc, Spp, and Spc matrices can be computed through the first moment as

and the second moments is

Given the property of Gaussian distribution,

follows a multivariate normal distribution with mean and variance-covariance matrix

Therefore, the conditional distribution of Z(t)i,j | Z(t−1)i,Z(t)i,−j,Z(t+1)i;Θ,Γ inside the inner expectation in (13) and (14) follows a multivariate normal distribution with mean μij and variance vij as follow

Thus, this conditional distributions follows a truncated normal on the interval [cj,y(t)ij,cj,y(t)ij+1] which the first and second moments can be obtained via lemma 2.1.

where ϕ(.) is the density function of the standard normal distribution.

where δ(t)i,j,y(t)i,j=(c(t)i,j−μ′i,j)/σ′ij. Here, the first order delta method is used to approximate the nonlinear terms [more details in (Guo et al., 2015)]. Moreover, we approximate the elements of inter time-slice conditional expectation matrix Spc through equations (2.4) and (2.4). For approximating the elements of intra time-slice conditional expectation matrices Spp, Scc we refer to the Appendix.

The M-step of the EM algorithm contains two-stage optimization process where we maximize expectation of the penalized log-likelihood with respect to Θ and Γ. We introduce two different penalty functions Pλ(.) and Pρ(.) for intra time-slice conditional independencies Θ, and inter time-slice conditional independencies Γ, respectively. Therefore, the objective function for optimization can be defined as

where S(E)Γ denotes the expectation of SΓ given the data and updated parameters, and θjj′ and γjj′ are the jj′-th element of the Θ and Γ matrices. Among different penalty functions, we consider the L1 norm and smoothly clipped absolute deviation (SCAD) penalty functions which have the desirable sparsity properties.

The Lasso or L1 penalty function is defined as

The L1 penalty leads to a desirable optimization problem, where the log-likelihood is convex and can efficiently be solved using various optimization algorithms at the k-th iteration of the EM. Under this penalty function, the updated estimates are given via

where the sparsity level of intra and inter time-slice conditional independences are controlled by λ and ρ. L1 penalty is biased due to its constant rate of penalty. To address this issue, Fan and Li (2001)

The SCAD penalty function is expressed as

where λ and a are two tunning parameters. The function Pλ,a(θ) corresponds to a quadratic spline on [0,∞) with knots at λ and aλ. A similar function can be written for Pρ,a(γ) where ρ and aρ are two knots. The SCAD penalty is symmetric but non-convex, whose first order derivative is given by

The notation z+ stands for the positive part of z. Fan and Li (2001) showed that in practice a=3.7 is a good choice. Maximizing non-convex penalized likelihood is challenging. To address this issue, we use an efficient algorithm proposed in Fan et al. (2009), which is based on local linear approximation, to maximize the penalized log-likelihood for the SCAD penalty function. In each its step, a symmetric linear function is used to locally approximates the SCAD penalty. Using the Taylor expansion, Pλ,a(θ) and Pρ,a(γ) can be approximated in the neighbor of θ0 and γ0 as follow:

Due to the monotonicity of Pλ(.) and Pρ(.) over [0,∞), the derivatives P′λ(.)=∂∂θ(Pλ(θ)) and P′ρ(.)=∂∂γ(Pρ(γ)) are non-negative for θ∈[0,∞) and γ∈[0,∞). Therefore, under the penalized log-likelihood with SCAD penalty, the estimate of the sparse parameters Θ(k) and Γ(k) relies on the solution of the following optimization problem at step k

where wjj′=P′λ(θ(k)jj′), νjl=P′ρ(γ(k)jl), and θ(k)jj′, γ(k)jl are jj′-th element of Θ and jl-th element of Γ, respectively. The SCAD penalty applies a constant penalty to large coefficients, whereas the L1 penalty increases linearly as |θ| increases. This features keep the SCAD penalty against producing biases for estimating large coefficients. Therefore, the SCAD penalty overcome the bias issue of the L1 penalty. Then a two stage-optimization problem within the M-step of the EM algorithm is employed to solve the objective functions (20) or (21) to estimate the parameters Θ and Γ.

For the SCAD penalty-based estimation, in the first stage we optimize

for previous Γ⋆. This optimization can be solved efficiently using the graphical lasso algorithm proposed by Friedman et al. (2008). Due to the sparsity in each iteration, we consider a one-step local linear approximation algorithm (LLA). Zou and Li (2008) showed that one-step LLA, asymptotically, performs as well as the fully iterative LLA algorithm as long as initial solution is good enough. In practice, we take the initial value as the L1 penalty graphical LASSO for estimating the intra time-slice conditional independences Θ in order to calculate the initial weights wjj′</spa