Consider the following distance query for an n-node graph G undergoing edge insertions and deletions: given two sets of nodes I and J, return the distances between every pair of nodes in I× J. This query is rather general and captures several versions of the dynamic shortest paths problem. In this paper, we develop an efficient (1+ϵ)-approximation algorithm for this query using fast matrix multiplication. Our algorithm leads to answers for some open problems for Single-Source and All-Pairs Shortest Paths (SSSP and APSP), as well as for Diameter, Radius, and Eccentricities. Below are some highlights. Note that all our algorithms guarantee worst-case update time and are randomized (Monte Carlo), but do not need the oblivious adversary assumption. Subquadratic update time for SSSP, Diameter, Centralities, ect.: When we want to maintain distances from a single node explicitly (without queries), a fundamental question is to beat trivially calling Dijkstra's static algorithm after each update, taking Θ(n^2) update time on dense graphs. It was known to be improbable for exact algorithms and for combinatorial any-approximation algorithms to polynomially beat the Ω(n^2) bound (under some conjectures) [Roditty, Zwick, ESA'04; Abboud, V. Williams, FOCS'14]. Our algorithm with I={s} and J=V(G) implies a (1+ϵ)-approximation algorithm for this, guaranteeing Õ(n^1.823/ϵ^2) worst-case update time for directed graphs with positive real weights in [1, W]. With ideas from [Roditty, V. Williams, STOC'13], we also obtain the first subquadratic worst-case update time for (5/3+ϵ)-approximating the eccentricities and (1.5+ϵ)-approximating the diameter and radius for unweighted graphs (with small additive errors). [...] 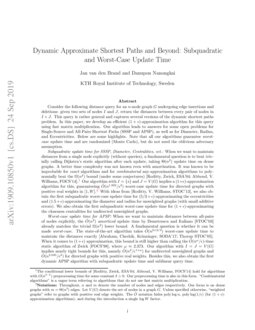 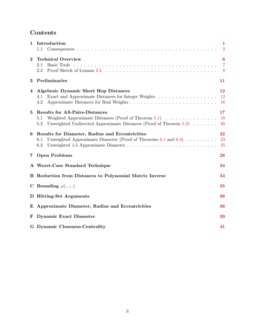 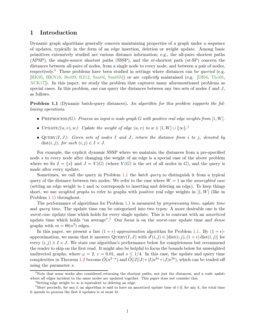 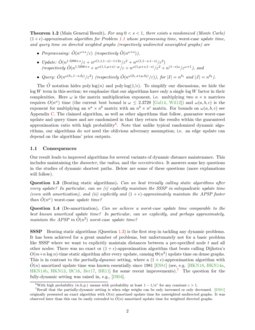