Winograd's minimal filtering algorithm has been widely used in Convolutional Neural Networks (CNNs) to reduce the number of multiplications for faster processing. However, it is only effective on convolutions with kernel size as 3x3 and stride as 1, because it suffers from significantly increased FLOPs and numerical accuracy problem for kernel size larger than 3x3 and fails on convolution with stride larger than 1. In this paper, we propose a novel Decomposable Winograd Method (DWM), which breaks through the limitation of original Winograd's minimal filtering algorithm to a wide and general convolutions. DWM decomposes kernels with large size or large stride to several small kernels with stride as 1 for further applying Winograd method, so that DWM can reduce the number of multiplications while keeping the numerical accuracy. It enables the fast exploring of larger kernel size and larger stride value in CNNs for high performance and accuracy and even the potential for new CNNs. Comparing against the original Winograd, the proposed DWM is able to support all kinds of convolutions with a speedup of  2, without affecting the numerical accuracy. 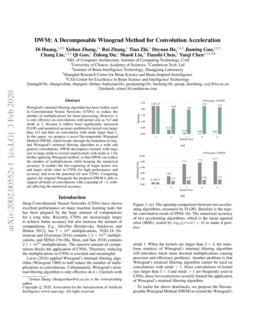 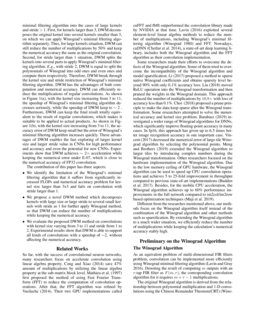 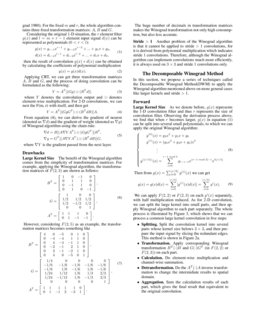 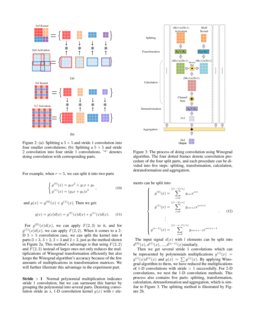 ., with stride 2, DWM is equal to split the polynomials of Winograd into odd ones and even ones and compute them respectively. Therefore, DWM break through the kernel size and stride restriction of Winograd’s minimal filtering algorithm. DWM has the advantages of both computation and numerical accuracy. DWM can efficiently reduce the multiplications of regular convolutions. As shown in Figure

1(a), with the kernel size increasing from 3 to 11, the speedup of Winograd’s minimal filtering algorithm decreases seriously, while the speedup of DWM keep to ∼ 2 . Furthermore, DWM can keep the final result totally equivalent to the result of regular convolutions, which makes it suitable to be applied to actual products. As shown in Figure 1(b), with the kernel size increasing from 3 to 11, the accuracy error of DWM keep small but the error of Winograd’s minimal filtering algorithm increases quickly. These advantages of DWM enables the fast exploring of larger kernel size and larger stride value in CNNs for high performance and accuracy and even the potential for new CNNs. Experiments show that DWM achieves ∼2× acceleration while keeping the numerical error under E-07, which is close to the numerical accuracy of FP32 convolution.

The contribution of this paper has three aspects:

So far, with the success of convolutional neuron networks, many researchers focus on accelerate convolution using linear algebra property. Cong and Xiao cong2014minimizing save 47% amount of multiplications by utilizing the linear algebra property at the sub-matrix block level. Mathieu et al. madisetti1997digital first proposed the method of using Fast Fourier Transform (FFT) to reduce the computation of convolution operations. After that, the FFT algorithm was refined by Vasilache vasilache2014fast. Their two GPU implementations called cuFFT and fbfft outperformed the convolution library made by NVIDIA at that time. Lavin lavin2016fast exploited several element-level linear algebra methods to reduce the number of multiplications, including Winograd’s minimal filtering algorithm

, a state-of-art deep learning library, includes both the Winograd algorithm and the FFT algorithm as their convolution implementation.

Preliminary on the Winograd Algorithm

As an equivalent problem of multi-dimensional FIR filters problem, convolution can be implemented more efficiently using Winograd minimal filtering algorithm [9]. Denoting the result of computing m outputs with an r-tap FIR filter as F(m,r), the corresponding convolution algorithm for it requires m+r−1 multiplications.

The original Winograd algorithm is derived from the relationship between polynomial multiplication and 1-D convolutions using the Chinese Remainder Theorem(CRT) [17]. For the fixed m and r, the whole algorithm contains three fixed transformation matrices: A, B and G.

Applying CRT, we can get three transformation matrices A, B and G, and the process of doing convolution can be formulated as the following:

where Y denotes the convolution output and ⊙ denotes element-wise multiplication. For 2-D convolutions, we can nest the F(m, r) with itself, and then get

where ∇Y is the gradient passed from the next layer.

However, considering F(2,5) as an example, the transformation matrices becomes something like

In this section, we propose a series of techniques called the Decomposable Winograd Method(DWM) to apply the Winograd algorithm mentioned above on more general cases like larger kernels and stride > 1.

We can apply F(2,2) or F(2,3) on each yi(x) separately, with half multiplication reduced. As for 2-D convolution, we can split the large kernel into small parts, and then apply Winograd algorithm to each part separately. The whole process is illustrated by Figure 3, which shows that we can process a common large kernel convolution in five steps:

For example, when r=5, we can split it into two parts

For g(0)(x)d(x), we can apply F(2,3) to it, and for g(1)(x)d(x), we can apply F(2,2). When it comes to a 2-D 5×5 convolution case, we can split the kernel into 4 parts:3×3, 3×2, 2×3 and 2×2, just as the method shown in Figure 1(a). This method’s advantage is that using F(2,2) and F(2,3) instead of larger ones not only reduces the multiplications of Winograd transformation efficiently but also keeps the Winograd algorithm’s accuracy because of the few amounts of multiplications in transformation matrices. We will further illustrate this advantage in the experiment part.

Normal polynomial multiplication indicates stride 1 convolution, but we can surmount this barrier by grouping the polynomial into several parts. Denoting convolution stride as s, 1-D convolution kernel g(x) with r elements can be split into

Then we get several stride 1 convolutions which can be represented by polynomials multiplications y(i)(x)=g(i)(x)d(i)(x) and y(x)=∑y(i)(x). By applying Winograd algorithm to them, we have reduced the multiplications of 1-D convolutions with stride > 1 successfully. For 2-D convolutions, we nest the 1-D convolution methods. This process also contains five parts: splitting, transformation, calculation, detransformation and aggregation, which is similar to Figure 3. The splitting method is illustrated by Figure 1(b).

For instance, when we are dealing with stride 2 convolutions, we can group the convolution kernel g(x) and input signal d(x) by their degree’s parity, and then get

Occasionally, we need to do a stride > 2 convolution with large kernel size, then we can combine the two techniques mentioned above. By applying these two techniques, we can optimize all kinds of convolutions with the Winograd algorithm, reducing the number of multiplications by half.

Using equation (5), we can apply DWM in the process of calculating gradients, and this will also reduce the number of multiplications by half. From SGD algorithm, we can derive that

where Wwino denotes weight in Winograd form and t denotes iteration. We should notice that GGT≠E

, so we keep weight W in the normal form (or called ’spatial domain’) instead of Winograd form (or called ’frequency domain’) during the training process in order to make DWM be the equivalent substitute of normal convolution.

From the derivative rules we know that for part j:

This means that we don’t need to store each output Y(i) for the backward. Furthermore, it is easy to derive that in the splitting step, the backward acts as follows:

where i denotes different parts produced by DWM.

We are not the first one who tries to solve the large kernel size problem that appeared during applying the Winograd algorithm. Lu et al. [10]

tried to implement the Winograd algorithm on FPGAs, and they solved large kernel problems by padding the kernel. However, the padded elements will be filled with non-zero values after the Winograd transformation, which means that paddings will bring lots of extra calculations. For DWM, we find a way that precisely separates the convolution operations without padding. This method avoids any redundant floating-point multiplications during Winograd transformation, and thus achieves the best acceleration without any numerical accuracy loss.

Furthermore, with the rise of neural architecture search (NAS), convolutions with larger kernel sizes such as 5×5 or 7×7 have become more popular than ever. Networks like ProxylessNAS [3] show that different computation environments will breed different neural architectures. For example, when we want to implement our neural networks on GPUs rather than on mobile CPUs, large kernel sizes may be more suitable choices than small ones because of the computation parallelism of GPUs. From beginning to the end, the architecture of neural networks follows the most popular hardware, not the other way round. Hence, we believe that reducing the computation overhead of neural networks is worthy in any case.

All the results were tested on NVIDIA V100 GPU. We have implemented DWM on TensorFlow

. On both platforms, the implemented DWM performs like a plug-and-play operator, which makes it convenient to use during inference and training. We tested the numerical accuracy of the algorithms by doing convolution with the standard normal distribution random numbers on one single layer, and then calculate the mean squared error (MSE) with FP64 convolution results. The numerical accuracy on a single layer was tested on both two platforms, and the results were the same. For all single layer tests, the batch size is set to 256 and the layers are the same padded. We measured the accuracy and FLOPs of networks based on PyTorch. The traditional model architectures are gained from TorchVision, and the ProxylessNAS

analysis is based on the official PyTorch implementation. The Networks’ accuracy was measured on ImageNet 2012

We also tested the actual runtime of convolution operations based on naive implementations of different kinds of convolutions. The result was tested by nvprof, an NVIDIA profiling tool. According to Table 4, we can conclude that: (1) DWM outperforms the original Winograd algorithm, especially in large kernel situation. (2) DWM is faster than cuDNN in some situations. Actually, when the size of the feature map increases to around 100, cuDNN performs better than DWM (not presented due to the space left). The instability of cuDNN may be caused by some other accelerating algorithms. Hence, both DWM and cuDNN have their advantages. Furthermore, the naive DWM implementation can be optimized by kernel fusion, soft pipeline and some other optimization techniques unlike the simple traditional 3x3 Winograd algorithm. Since we mainly focuses on speed up Winograd through the algorithm aspect in this paper, the implementation optimization of DWM is our future work.

Finally, we analyzed several representative networks. This analysis includes the comparison of total FLOPs of the network and the top-1 accuracy of inference on the ImageNet 2012 dataset. The top-1 accuracy of the two accelerating algorithms is tested using FP16. As shown in Table 2, we can conclude that: (1) the top-1 acc is very close. This result is not surprising, because Table 1 shows that only large kernel size will make DWM and the traditional Winograd algorithm different. Thus, the networks most of which consist of 3×3 kernel convolutions like will get similar inference results. (2) When there are more large kernels in the network such as 11×11 in AlexNet and 1×5/7 or 5/7×1 in GoogLeNet and Inception-v3, DWM performs better.

In this paper, we propose a novel DWM to extend Winograd’s minimal filtering algorithm to a wide and general convolutions. Winograd’s minimal filtering algorithm has been widely used to reduce the number of multiplications for faster processing. However, it has the drawbacks of sufferring from significantly increased FLOPs and numerical accuracy problem for kernel size larger than 3x3 and failing on convolution with stride larger than 1, so it is only effective on convolutions with kernel size as 3x3 and stride as 1. To solve this problems, we propose DWM to break through the limitation of original Winograd’s minimal filtering algorithm on convolutions of large kernel and large stride. DWM decomposes kernels with large size or large stride to several small kernels with stride as 1 for further applying Winograd method, so that DWM can reduce the number of multiplications while keeping the numerical accuracy. Experimental results show that the proposed DWM is able to support all kinks of convolutions with a speedup of ∼2, without affecting the numerical accuracy. These good properties of DWM enables the fast exploring of larger kernel size and larger stride value in CNNs for high performance, accuracy and even the potential for new CNNs.