Federated learning, which solves the problem of data island by connecting multiple computational devices into a decentralized system, has become a promising paradigm for privacy-preserving machine learning. This paper studies vertical federated learning (VFL), which tackles the scenarios where collaborating organizations share the same set of users but disjoint features. Contemporary VFL methods are mainly used in static scenarios where the active party and the passive party have all the data from the beginning and will not change. However, the data in real life often changes dynamically. To alleviate this problem, we propose a new vertical federation learning method, DVFL, which adapts to dynamic data distribution changes through knowledge distillation. In DVFL, most of the computations are held locally to improve data security and model efficiency. Our extensive experimental results show that DVFL can not only obtain results close to existing VFL methods in static scenes, but also adapt to changes in data distribution in dynamic scenarios. 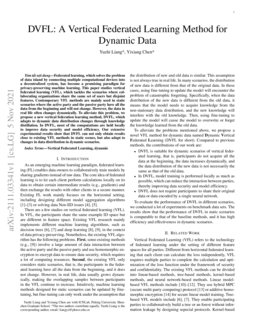 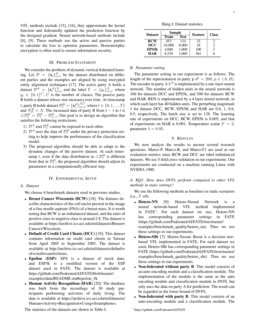 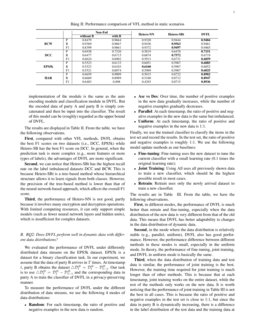 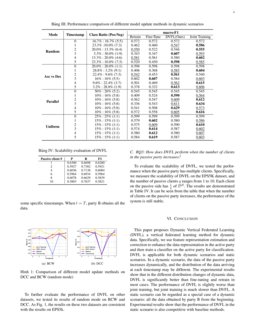 The ability to perform computation on devices, such as smartphones, cars...
Natascha Harth, et al. ∙

There are a few studies on vertical federated learning (VFL). In VFL, the participants share the same example ID space but are different in feature space. Existing VFL research mainly implements different machine learning algorithms, such as decision trees

[DBLP:journals/corr/abs-2008-10838, DBLP:conf/ijcai/ZhangWWXP18], in the context of data privacy-preserving. Nonetheless, the existing VFL algorithm has the following problems. First, some existing methods (e.g.,[DBLP:conf/ijcai/ZhangWWXP18]) involve a large amount of data interaction between the active party and the passive party and use homomorphic encryption to encrypt data to ensure data security, which requires a lot of computing resources. Second, the existing VFL only considers static scenarios, that is, the participants in the federated learning have all the data from the beginning, and it does not change. However, in real life, data usually grows dynamically, making the overlapping samples between participants in the VFL continue to increase. Intuitively, machine learning methods designed for static scenarios can be updated by fine-tuning, but fine-tuning can only work under the assumption that the distribution of new and old data is similar. This assumption is not always true in real life. In many scenarios, the distribution of new data is different from that of the original data. In these cases, using fine-tuning to update the model will encounter the problem of catastrophic forgetting. Specifically, when the data distribution of the new data is different from the old data, it means that the model needs to acquire knowledge from the non-stationary data distribution, and the new knowledge will interfere with the old knowledge. Then, using fine-tuning to update the model will cause the model to overwrite or forget the knowledge learned from the old data.

To alleviate the problems mentioned above, we propose a novel VFL method for dynamic data named Dynamic Vertical Federated Learning (DVFL for short). Compared to previous methods, the contributions of our work are:

Vertical Federated Learning (VFL) refers to the technology of federated learning under the setting of different feature spaces for all parties. Different from horizontal federated learning that each client can calculate the loss independently, VFL requires multiple parties to complete the calculation and optimization of the loss function under the framework of security and confidentiality. The existing VFL methods can be divided into linear-based methods, tree-based methods, kernel-based methods, and neural network-based methods. Linear model-based VFL methods include

We consider the problem of dynamic vertical federated learning. Let D={xi}Ni=1 be the dataset distributed on different parties and the examples are aligned by using encrypted entity alignment techniques [DBLP:journals/corr/abs-1803-04035]. The active party A holds a dataset DA={xAi}Ni=1 and the label Y={yi}Ni=1, where yi∈{0,1}C, C is the number of classes. The passive party B holds a dataset whose size increases over time. At timestamp t, party B holds dataset DBt={xBi}NBti=1, where t∈{0,1,...,T} and NBT=N. The increased data of party B from t−1 to t is △DBt=DBt−DBt−1. Our goal is to design an algorithm that satisfies the following restrictions.

The statistics of the datasets are shown in Table I.

The parameter setting in our experiment is as follows. The length of the representation in party p dp=200, p∈(A,B). The encoder in party A hA is implemented by a one-layer neural network. The number of hidden units in the neural network is 100 for datasets DCC and EPS5k, and 500 for datasets BCW and HAR. REN is implemented by a 4 layer neural network, in which each layer has 40 hidden units. The perturbing magnitude δ for dataset DCC, BCW, EPS5K and HAR are 0.6, 1, 0.6, 0.5, respectively. The batch size is set to 128. The learning rate of experiments on DCC, BCW, EPS5k is 0.005, and that of experiments on HAR is 0.001. Temperature scalar F=2, parameter λ=0.95.

We now analyze the results to answer several research questions. Marco-P, Marco-R, and Marco-F1 are used as our evaluation metrics since BCW and DCC are label imbalanced datasets. We use 5-fold cross validation in our experiments. Our experiments are conducted on a machine running Linux with NVIDIA 1080.

V-a RQ1: How does DVFL perform compared to other VFL methods in static settings?

We use the following methods as baselines in static scenarios (i.e., T =0).

The results are displayed in Table II. From the table, we have the following observations.

First, compared with other VFL methods, DVFL obtains the best F1 scores on two datasets (i.e., DCC, EPS5k) while Hetero-SB has the best F1 score on DCC. In general, when the prediction task is more complex (e.g., more features or more types of labels), the advantages of DVFL are more significant.

Second, we can notice that Hetero-SBt has the highest recall rate on the label imbalanced datasets DCC and BCW. This is because Hetero-SBt is a tree-based method whose hierarchical structure allows it to learn signals from both classes. However, the precision of the tree-based method is lower than that of the neural network-based approach, which affects the overall F1 score.

Third, the performance of Hetero-NN is not good, partly because it involves many encryption and decryption operations. With limited computing resources, it can only support simple models (such as fewer neural network layers and hidden units), which is insufficient for complex datasets.

We evaluated the performance of DVFL under differently distributed data streams on the EPS5k dataset. EPS5k is a dataset for a binary classification task. In our experiment, we assume that the data of party B arrives in T times. At timestamp t, party B obtains the dataset △DBt=DBt−DBt−1. Our task is to use △DBt=DBt−DBt−1 and the corresponding data in party A to train the classifier of DVFL in a privacy-preserving manner.

To measure the performance of DVFL under the different distribution of data streams, we use the following 4 modes of data distributions:

Finally, we use the trained classifier to classify the items in the test set and record the results. In the test set, the ratio of positive and negative examples is roughly 1:1. We use the following model update methods as our baselines:

The results are in Table  III. From the table, we have the following observations.

Second, in the mode where the data distribution is relatively stable (e.g., parallel, uniform), DVFL also has good performance. However, the performance difference between different methods in these modes is small, especially in the uniform mode. In theory, the performance of fine-tuning, joint training, and DVFL in uniform mode is basically the same.

Third, when the data distribution of training data and test data is similar, the performance of joint training is the best. However, the training time required for joint training is much longer than of other methods. This is because that at each timestamp, joint training works on the entire dataset, while the rest of the methods only works on the new data. It is worth noticing that the performance of joint training in Table III is not the best in all cases. This is because the ratio of positive and negative examples in the test set is close to 1:1, but since the data in party B is dynamically increasing, there is a difference in the label distribution of the test data and the training data at some specific timestamps. When t=T, party B obtains all the data.

To further evaluate the performance of DVFL on other datasets, we tested its results of random mode on BCW and DCC. As Fig. 1, the results on these two datasets are consistent with the results on EPS5k.

V-C RQ3: How does DVFL perform when the number of clients in the passive party increases?

To evaluate the scalability of DVFL, we tested the performance when the passive party has multiple clients. Specifically, we measure the scalability of DVFL on the EPS5K dataset, and the number of passive clients q ranges from 1 to 10. Each client on the passive side has 1q of DB. The results are demonstrated in Table IV. It can be seen from the table that when the number of clients on the passive party increases, the performance of the system is still stable.

This paper proposes Dynamic Vertical Federated Learning (DVFL), a vertical federated learning method for dynamic data. Specifically, we use feature representation estimation and correction to enhance the data representation in the active party and then train a classifier on the active party for classification. DVFL is applicable for both dynamic scenarios and static scenarios. In a dynamic scenario, the data of the passive party increases dynamically, and the distribution of the data arriving at each timestamp may be different. The experimental results show that in the different distribution changes of dynamic data, DVFL is significantly better than fine-tuning and retrain in most cases. The performance of DVFL is slightly worse than joint training, but joint training is much slower than DVFL. A static scenario can be regarded as a special case of a dynamic scenario: all the data obtained by party B from the beginning. Experimental results show that the performance of DVFL in the static scenario is also competitive with baseline methods.