Given a convex optimization problem and its dual, there are many possible first-order algorithms. In this paper, we show the equivalence between mirror descent algorithms and algorithms generalizing the conditional gradient method. This is done through convex duality, and implies notably that for certain problems, such as for supervised machine learning problems with non-smooth losses or problems regularized by non-smooth regularizers, the primal subgradient method and the dual conditional gradient method are formally equivalent. The dual interpretation leads to a form of line search for mirror descent, as well as guarantees of convergence for primal-dual certificates. 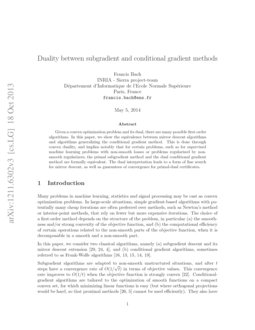 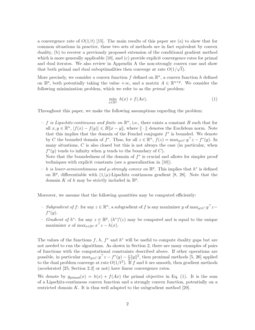 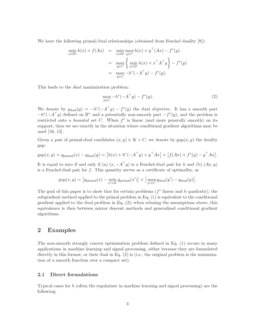 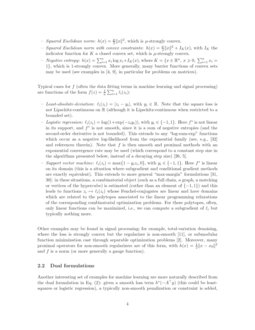 Many problems in machine learning, statistics and signal processing may be cast as convex optimization problems. In large-scale situations, simple gradient-based algorithms with potentially many cheap iterations are often preferred over methods, such as Newton’s method or interior-point methods, that rely on fewer but more expensive iterations. The choice of a first-order method depends on the structure of the problem, in particular (a) the smoothness and/or strong convexity of the objective function, and (b) the computational efficiency of certain operations related to the non-smooth parts of the objective function, when it is decomposable in a smooth and a non-smooth part.

In this paper, we consider two classical algorithms, namely (a) subgradient descent and its mirror descent extension [29, 24, 4], and (b) conditional gradient algorithms, sometimes referred to as Frank-Wolfe algorithms [16, 13, 15, 14, 19].

Subgradient algorithms are adapted to non-smooth unstructured situations, and after t steps have a convergence rate of O(1/√t) in terms of objective values. This convergence rate improves to O(1/t) when the objective function is strongly convex [22]. Conditional-gradient algorithms are tailored to the optimization of smooth functions on a compact convex set, for which minimizing linear functions is easy (but where orthogonal projections would be hard, so that proximal methods [26, 5] cannot be used efficiently). They also have a convergence rate of O(1/t) [15]. The main results of this paper are (a) to show that for common situations in practice, these two sets of methods are in fact equivalent by convex duality, (b) to recover a previously proposed extension of the conditional gradient method which is more generally applicable [10], and (c) provide explicit convergence rates for primal and dual iterates. We also review in Appendix A the non-strongly convex case and show that both primal and dual suboptimalities then converge at rate O(1/√t).

Throughout this paper, we make the following assumptions regarding the problem:

Moreover, we assume that the following quantities may be computed efficiently:

The values of the functions f, h, f∗ and h∗ will be useful to compute duality gaps but are not needed to run the algorithms. As shown in Section 2, there are many examples of pairs of functions with the computational constraints described above. If other operations are possible, in particular maxy∈Cy⊤z−f∗(y)−ε2∥y∥2, then proximal methods [5, 26] applied to the dual problem converge at rate O(1/t2). If f and h are smooth, then gradient methods (accelerated [25, Section 2.2] or not) have linear convergence rates.

We denote by gprimal(x)=h(x)+f(Ax) the primal objective in Eq. (1). It is the sum of a Lipschitz-continuous convex function and a strongly convex function, potentially on a restricted domain K. It is thus well adapted to the subgradient method [29].

We have the following primal/dual relationships (obtained from Fenchel duality [8]):

This leads to the dual maximization problem:

We denote by gdual(y)=−h∗(−A⊤y)−f∗(y) the dual objective. It has a smooth part −h∗(−A⊤y) defined on Rn and a potentially non-smooth part −f∗(y), and the problem is restricted onto a bounded set C. When f∗ is linear (and more generally smooth) on its support, then we are exactly in the situation where conditional gradient algorithms may be used [16, 13].

Given a pair of primal-dual candidates (x,y)∈K×C, we denote by gap(x,y) the duality gap:

The goal of this paper is to show that for certain problems (f∗ linear and h quadratic), the subgradient method applied to the primal problem in Eq. (1) is equivalent to the conditional gradient applied to the dual problem in Eq. (2); when relaxing the assumptions above, this equivalence is then between mirror descent methods and generalized conditional gradient algorithms.

The non-smooth strongly convex optimization problem defined in Eq. (1) occurs in many applications in machine learning and signal processing, either because they are formulated directly in this format, or their dual in Eq. (2) is (i.e., the original problem is the minimization of a smooth function over a compact set).

Typical cases for h (often the regularizer in machine learning and signal processing) are the following:

Typical cases for f (often the data fitting terms in machine learning and signal processing) are functions of the form f(z)=1n∑ni=1ℓi(zi):

Other examples may be found in signal processing; for example, total-variation denoising, where the loss is strongly convex but the regularizer is non-smooth [11], or submodular function minimization cast through separable optimization problems [2]. Moreover, many proximal operators for non-smooth regularizers are of this form, with h(x)=12∥x−x0∥2 and f is a norm (or more generally a gauge function).

Another interesting set of examples for machine learning are more naturally described from the dual formulation in Eq. (2): given a smooth loss term h∗(−A⊤y) (this could be least-squares or logistic regression), a typically non-smooth penalization or constraint is added, often through a norm Ω. Thus, this corresponds to functions f∗ of the form f∗(y)=φ(Ω(y)), where φ is a convex non-decreasing function (f∗ is then convex).

Our main assumption is that a subgradient of f may be easily computed. This is equivalent to being able to maximize functions of the form z⊤y−f∗(y)=z⊤y−φ(Ω(y)) for z∈Rn. If one can compute the dual norm of z, Ω∗(z)=maxΩ(y)⩽1z⊤y, and in particular a maximizer y in the unit-ball of Ω, then one can compute simply the subgradient of f. Only being able to compute the dual norm efficiently is a common situation in machine learning and signal processing, for example, for structured regularizers based on submodularity [2], all atomic norms [12], and norms based on matrix decompositions [1]. See additional examples in [19].

Our assumption regarding the compact domain of f∗ translates to the assumption that φ has compact domain. This includes indicator functions φ=I[0,ω0] which corresponds to the constraint Ω(y)⩽ω0. We may also consider φ(ω)=λω+I[0,ω0](ω), which corresponds to jointly penalizing and constraining the norm; in practice, ω0 may be chosen so that the constraint Ω(y)⩽ω0 is not active at the optimum and we get the solution of the penalized problem maxy∈Rn−h∗(−A⊤y)−λΩ(y). See [17, 34, 1] for alternative approaches.

We first assume that the function h is essentially smooth (i.e., differentiable at any point in the interior of K, and so that the norm of gradients converges to +∞ when approaching the boundary of K); then h′ is a bijection from int(K) to Rp, where K is the domain of h (see, e.g., [28, 18]). We consider the Bregman divergence

We first consider the common situation where h(x)=μ2∥x∥2; the primal problem then becomes:

The projected subgradient method starts from any x0∈Rp, and iterates the following recursion:

The recursion may be rewritten as

which is equivalent to xt being the unique minimizer of

which is the traditional proximal step, with step size ρt/μ.

We may interpret the last formulation in Eq. (3) for the square regularizer h(x)=μ2∥x∥2 as the minimization of

with solution defined through (note that h′ is a bijection from int(K) to Rp):

This leads to the following definition of the mirror descent recursion:

The following proposition proves the convergence of mirror descent in the strongly convex case with rate O(1/t)—previous results were considering the convex case, with convergence rate O(1/√t) [24, 4].

Proposition 1 (Convergence of mirror descent in the strongly convex case)

Assume that (a) f is Lipschitz-continuous and finite on Rp, with C the domain of f∗, (b) h is essentially smooth and μ-strongly convex. Consider ρt=2/(t+1) and R2=maxy,y′∈C∥A⊤(y−y′)∥2. Denoting by x∗ the unique minimizer of gprimal, after t iterations of the mirror descent recursion of Eq. (4), we have:

In order to upper-bound the two terms in Eq. (3), we first consider the following bound (obtained by convexity of f and the definition of D):

which may be rewritten as:

Moreover, by definition of xt,

This implies that D(x∗,xt)⩽R2μ(t+1), i.e., the iterates converges. Moreover, using the convexity of g,

i.e., the objective functions at an averaged iterate converges, and

i.e., one of the iterates has an objective that converges.

Note that with the step size ρt=2t+1, we have

that is, h′(xt) is a weighted average of subgradients (with more weights on later iterates).

For ρt=1/t, then, we the same techniques, we would obtain a convergence rate proportional to R2μtlogt for the average iterate 1t∑tu=1xu−1, thus with an additional logt factor (see a similar situation in the stochastic case in [20]). We would then have h′(xt)=1t∑tu=1[−A⊤f′(Axu−1)], and this is exactly a form dual averaging method [27], which also comes with primal-dual guarantees.

The previous result does not require h to be essentially smooth, i.e., it may be applied to h(x)=μ2∥x∥2+IK(x) where K is a closed convex set strictly included in Rp. In the mirror descent recursion,

Note that when h(x)=μ2∥x∥2+IK(x), the algorithm above is not equivalent to classical projected gradient descent. Indeed, the classical algorithm has the iteration

and corresponds to the choice h′(xt−1)=μxt−1 in the mirror descent recursion, which, when xt−1 is on the boundary of K, is not the choice that we need for the equivalence in Section 4.

In this section, we first review the classical conditional gradient algorithm, which corresponds to the extra assumption that f∗ is linear in its domain.

Given a maximization problem of the following form (i.e., where f∗ is linear on its domain, or equal to zero by a simple change of variable):

the conditional gradient algorithm consists in the following iteration (note that below Axt−1=A(h∗)′(−A⊤yt−1) is the gradient of the objective function and that we are maximizing the first-order Taylor expansion to obtain a candidate ¯yt−1 towards which we make a small step):

It corresponds to a linearization of −h∗(−A⊤y) and its maximization over the bounded convex set C. As we show later, the choice of ρt may be done in different ways, through a fixed step size of by (approximate) line search.

Following [10], the conditional gradient method can be generalized to problems of the form

with the following iteration:

The previous algorithm may be interpreted as follows: (a) perform a first-order Taylor expansion of the smooth part −h∗(−A⊤y), while leaving the other part −f∗(y) intact, (b) minimize the approximation, and (c) perform a small step towards the maximizer. Note the similarity (and dissimilarity) with proximal methods which would add a proximal term proportional to ∥y−yt−1∥2, leading to faster convergences, but with the extra requirement of solving the proximal step [26, 5].

which is exactly the mirror descent algorithm described in Eq. (4). This leads to the following proposition:

When h is not essentially smooth, then with a particular choice of subgradient (see end of Section 3), the two algorithms are also equivalent. We now provide convergence proofs for the two versions (with adaptive and non-adaptive step sizes); similar rates may be obtained without the boundedness assumptions [10], but our results provide explicit constants and primal-dual guarantees. We first have the following convergence proof for generalized conditional gradient with no line search (the proof of dual convergence uses standard arguments from [13, 15], while the convergence of gaps is due to [19] for the regular conditional gradient):

Assume that (a) f is Lipschitz-continuous and finite on Rp, with C the domain of f∗, (b) h is μ-strongly convex. Consider ρt=2/(t+1) and R2=maxy,y′∈C∥A⊤(y−y′)∥2. Denoting by y∗ any maximizer of gdual on C, after t iterations of the generalized conditional gradient recursion of Eq. (7), we have: