A new class of univariate stationary interpolatory subdivision schemes of dual type is presented. As opposed to classical primal interpolatory schemes, these new schemes have masks with an even number of elements and are not step-wise interpolants. A complete algebraic characterization, which covers every arity, is given in terms of identities of trigonometric polynomials associated to the schemes. This characterization is based on a necessary condition for refinable functions to have prescribed values at the nodes of a uniform lattice, as a consequence of the Poisson summation formula. A strategy for the construction is then showed, alongside meaningful examples for applications that have comparable or even superior properties, in terms of regularity, length of the support and/or polynomial reproduction, with respect to the primal counterparts. 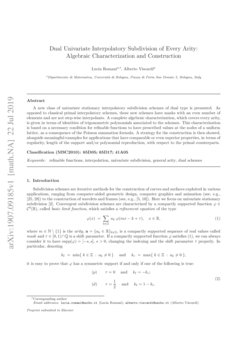 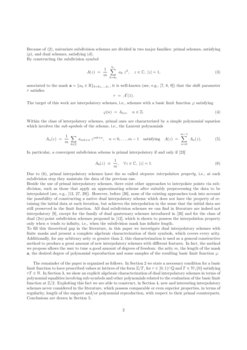 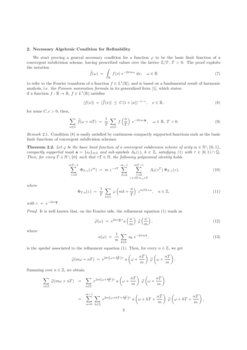 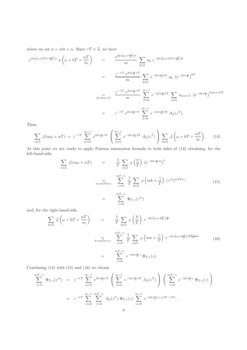 Self-dual codes over finite fields and over some finite rings have been ...
Parinyawat Choosuwan, et al. ∙

it is easy to prove that φ has a symmetric support if and only if one of the following is true:

The target of this work are interpolatory schemes, i.e., schemes with a basic limit function φ satisfying

Within the class of interpolatory schemes, primal ones are characterized by a simple polynomial equation which involves the sub-symbols of the scheme, i.e., the Laurent polynomials

In particular, a convergent subdivision scheme is primal interpolatory if and only if MR1397613

Due to (6), primal interpolatory schemes have the so called stepwise interpolation property, i.e., at each subdivision step they maintain the data of the previous one. Beside the use of primal interpolatory schemes, there exist other approaches to interpolate points via subdivision, such as those that apply an approximating scheme after suitably preprocessing the data to be interpolated (see, e.g., Deng2010137 ; MR3921224 ; Zheng2006301 ). However, before LUCIA , none of the existing approaches took into account the possibility of constructing a native dual interpolatory scheme which does not have the property of retaining the initial data at each iteration, but achieves the interpolation in the sense that the initial data are still preserved in the limit function. All dual subdivision schemes we can find in literature are indeed not interpolatory MR3071114 , except for the family of dual quaternary schemes introduced in LUCIA and for the class of dual (2n)-point subdivision schemes proposed in DENG2019344 , which is shown to possess the interpolation property only when n tends to infinity, i.e., when the subdivision mask has infinite length. To fill this theoretical gap in the literature, in this paper we investigate dual interpolatory schemes with finite masks and present a complete algebraic characterization of their symbols, which covers every arity. Additionally, for any arbitrary arity m greater than 2

, this characterization is used as a general constructive method to produce a great amount of new interpolatory schemes with different features. In fact, the method we propose allows the user to tune a good amount of degrees of freedom: the arity

m, the length of the mask a, the desired degree of polynomial reproduction and some samples of the resulting basic limit function φ.

The remainder of the paper is organized as follows. In Section 2 we state a necessary condition for a basic limit function to have prescribed values at lattices of the form Z/T, for τ∈[0,1)∩Q and T∈N∖{0} satisfying τT∈N. In Section 3, we show an explicit algebraic characterization of dual interpolatory schemes in terms of polynomial equalities involving sub-symbols and other polynomials related to the evaluation of the basic limit function at Z/2. Exploiting this fact we are able to construct, in Section 4, new and interesting interpolatory schemes never considered in the literature, which possess comparable or even superior properties, in terms of regularity, length of the support and/or polynomial reproduction, with respect to their primal counterparts. Conclusions are drawn in Section 5.

We start proving a general necessary condition for a function φ to be the basic limit function of a convergent subdivision scheme, having prescribed values over the lattice Z/T, T>0. The proof exploits the notation

to refer to the Fourier transform of a function

f∈L1(R), and is based on a fundamental result of harmonic analysis, i.e. the Poisson summation formula in its generalized form MR1420504 , which states: if a function f:R→R, f∈L1(R) satisfies

Condition (8) is easily satisfied by continuous compactly supported functions such as the basic limit functions of convergent subdivision schemes.

It is well known that, on the Fourier side, the refinement equation (1) reads as

is the symbol associated to the refinement equation (1). Then, for every n∈Z, we get

Summing over n∈Z, we obtain

At this point we are ready to apply Poisson summation formula to both sides of (14) obtaining, for the left-hand-side,

and, for the right-hand-side,

For m=2,τ=0,T=1, the identity (10) is equivalent to the algebraic condition stated in MR1790328 , equation (2.7), for a binary refinable function to have prescribed values at the integers, thus it can be seen as a generalization of it.

In Theorem 2.2, once m and τ are fixed, the bigger is T, the more evaluations of φ we need to take into account. In particular, since the aim is to construct a refinable function given some of its values, it makes sense to consider

Let us consider the dual case, i.e., (d) in (2). Since τ=12, according to (17) we choose T=2. In Lemma 3.5 we start specializing the necessary condition of Theorem 2.2 to the dual interpolatory case. Then we split the characterization based on the arity m

First we rewrite the necessary condition for refinability (10) with τ=12 and T=2, obtaining

As a consequence of Lemma 3.5, it is easy to prove that for the arity m=2 there are no continuous refinable functions. This could be the reason why dual interpolatory schemes have not been investigated before.

For m=2 there are no convergent dual interpolatory subdivision schemes.

Consider the necessary condition (18) for m=2:

In particular, the left-hand side can be rewritten as

Then, recalling (5), we rewrite the right-hand side as

At this point, to proceed with the algebraic characterization of dual interpolatory schemes we have to split computations into two cases: the case with m odd (Theorem 3.8) and the case with m even (Theorem 3.9). The changes are due to the equivalences that the indices of the sums in the right-hand-side of (18) must satisfy, which depend on m. We thus treat the two cases separately.

Let m=2λ+1,λ∈N∖{0}. A convergent m-ary subdivision scheme is a dual interpolatory scheme if and only if

Conversely, if (21) holds, we can subtract it from the necessary condition for refinability (10) with τ=12 and T=2, getting, for the left-hand-side,

and, for the right-hand-side,

Recalling (5) and (11), one realizes that all the powers of z of the second term of the right-hand-side of (24) are odd, and thus, since the left-hand side 12 presents a unique power of z which is even, it must hold that

which implies φ(k)=δ0,k, k∈Z, and this concludes the proof. ∎

Let m=2λ,λ∈N∖{0,1}. A convergent m-ary subdivision scheme is a dual interpolatory scheme if and only if

Conversely, if (26) holds, we can subtract it from the necessary condition for refinability (10) with τ=12 and T=2, getting again (22), while, for the right-hand-side,

In what follows matrices and vectors are considered to be bi-infinite where not specified and are labeled by bold uppercase and lowercase letters respectively. When useful, subsets of those matrices and vectors will be denoted using the convenient MatLab notation. Furthermore, we let the reader know that the given estimates of the regularity of the proposed schemes are obtained via joint spectral radius techniques. For the approximation of the joint spectral radius, the MatLab package

t-toolboxes, with parameter δ=1−1−12, has been used. This package implements the modified invariant polytope method by Guglielmi, Mejstrik and Protasov (see MR3886713 ; MR3009529 ; THOMAS2 ). The Hölder regularities are given with a precision of 10−4.

The linear system to be solved arises from matching the coefficients of the Laurent polynomial in the left- and right-hand side of (21) (when m is odd) or (26) (when m is even). The result is described in the following Proposition.