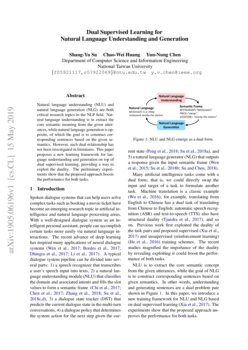 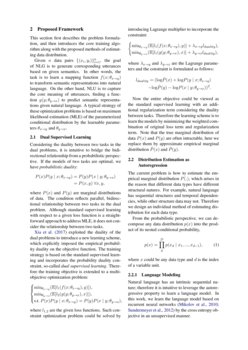 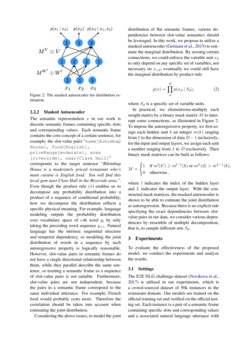 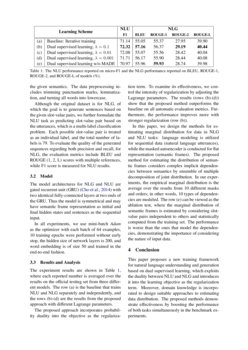 Towards Unsupervised Language Understanding and Generation by Joint Dual Learning

An Analysis of Negation in Natural Language Understanding Corpora

. A typical dialogue system pipeline can be divided into several parts: 1) a speech recognizer that transcribes a user’s speech input into texts, 2) a natural language understanding module (NLU) that classifies the domain and associated intents and fills the slot values to form a semantic frame

Many artificial intelligence tasks come with a dual form; that is, we could directly swap the input and target of a task to formulate another task. Machine translation is a classic example Wu et al. (2016); for example, translating from English to Chinese has a dual task of translating from Chinese to English; automatic speech recognition (ASR) and text-to-speech (TTS) also have structural duality Tjandra et al. (2017), and so on. Previous work first exploited the duality of the task pairs and proposed supervised Xia et al. (2017)

He et al. (2016) training schemes. The recent studies magnified the importance of the duality by revealing exploiting it could boost the performance of both tasks.

NLU is to extract the core semantic concept from the given utterances, while the goal of NLG is to construct corresponding sentences based on given semantics. In other words, understanding and generating sentences are a dual problem pair shown in Figure 1. In this paper, we introduce a new training framework for NLU and NLG based on dual supervised learning Xia et al. (2017). The experiments show that the proposed approach improves the performance for both tasks.

This section first describes the problem formulation, and then introduces the core training algorithm along with the proposed methods of estimating data distribution.

Given n data pairs {(xi,yi)}ni=1, the goal of NLG is to generate corresponding utterances based on given semantics. In other words, the task is to learn a mapping function f(x;θx→y) to transform semantic representations into natural language. On the other hand, NLU is to capture the core meaning of utterances, finding a function g(y;θy→x) to predict semantic representations given natural language. A typical strategy of these optimization problems is based on maximum likelihood estimation (MLE) of the parameterized conditional distribution by the learnable parameters θx→y and θy→x.

Considering the duality between two tasks in the dual problems, it is intuitive to bridge the bidirectional relationship from a probabilistic perspective. If the models of two tasks are optimal, we have probabilistic duality:

exploited the duality of the dual problems to introduce a new learning scheme, which explicitly imposed the empirical probability duality on the objective function. The training strategy is based on the standard supervised learning and incorporates the probability duality constraint, so-called

where l1,2 are the given loss functions. Such constraint optimization problem could be solved by introducing Lagrange multiplier to incorporate the constraint:

where λx→y and λy→x are the Lagrange parameters and the constraint is formulated as follows:

Now the entire objective could be viewed as the standard supervised learning with an additional regularization term considering the duality between tasks. Therefore the learning scheme is to learn the models by minimizing the weighted combination of original loss term and regularization term. Note that the true marginal distribution of data P(x) and P(y) are often intractable, here we replace them by approximate empirical marginal distribution ^P(x) and ^P(y).

The current problem is how to estimate the empirical marginal distribution ^P(.), which arises in the reason that different data types have different structural natures. For example, natural language has sequential structures and temporal dependencies, while other structure data may not. Therefore we design an individual method of estimating distribution for each data type.

From the probabilistic perspective, we can decompose any data distribution p(x) into the product of its nested conditional probability,

where x could be any data type and d is the index of a variable unit.

Natural language has an intrinsic sequential nature; therefore it is intuitive to leverage the autoregressive property to learn a language model. In this work, we learn the language model based on recurrent neural networks

The semantic representation x in our work is discrete semantic frames containing specific slots and corresponding values. Each semantic frame contains the core concept of a certain sentence, for example, the slot-value pairs “name[Bibimbap House], food[English], priceRange[moderate], area [riverside], near[Clare Hall]” corresponds to the target sentence “Bibimbap House is a moderately priced restaurant who’s main cuisine is English food. You will find this local gem near Clare Hall in the Riverside area.”. Even though the product rule (1

. Natural language has the intrinsic sequential structure and temporal dependency, so modeling the joint distribution of words in a sequence by such autoregressive property is logically reasonable. However, slot-value pairs in semantic frames do not have a single directional relationship between them, while they parallel describe the same sentence, so treating a semantic frame as a sequence of slot-value pairs is not suitable. Furthermore, slot-value pairs are not independent, because the pairs in a semantic frame correspond to the same individual utterance. For example, French food would probably costs more. Therefore the correlation should be taken into account when estimating the joint distribution.

Considering the above issues, to model the joint distribution of flat semantic frames, various dependencies between slot-value semantics should be leveraged. In this work, we propose to utilize a masked autoencoder Germain et al. (2015) to estimate the marginal distribution. By zeroing certain connections, we could enforce the variable unit xd to only depend on any specific set of variables, not necessary on x<d; eventually we could still have the marginal distribution by product rule:

where Sd is a specific set of variable units.

In practical, we elementwise-multiply each weight matrix by a binary mask matrix M to interrupt some connections, as illustrated in Figure 2. To impose the autoregressive property, we first assign each hidden unit k an integer m(k) ranging from 1 to the dimension of data D−1 inclusively; for the input and output layers, we assign each unit a number ranging from 1 to D exclusively. Then binary mask matrices can be built as follows:

where l indicates the index of the hidden layer and L indicates the output layer. With the constructed mask matrices, the masked autoencoder is shown to be able to estimate the joint distribution as autoregression. Because there is no explicit rule specifying the exact dependencies between slot-value pairs in our data, we consider various dependencies by ensemble of multiple decomposition, that is, to sample different sets Sd.

To evaluate the effectiveness of the proposed model, we conduct the experiments and analyze the results.

The E2E NLG challenge dataset Novikova et al. (2017) is utilized in our experiments, which is a crowd-sourced dataset of 50k instances in the restaurant domain. Our models are trained on the official training set and verified on the official testing set. Each instance is a pair of a semantic frame containing specific slots and corresponding values and a associated natural language utterance with the given semantics. The data preprocessing includes trimming punctuation marks, lemmatization, and turning all words into lowercase.

Although the original dataset is for NLG, of which the goal is to generate sentences based on the given slot-value pairs, we further formulate the NLU task as predicting slot-value pair based on the utterances, which is a multi-label classification problem. Each possible slot-value pair is treated as an individual label, and the total number of labels is 79. To evaluate the quality of the generated sequences regarding both precision and recall, for NLG, the evaluation metrics include BLEU and ROUGE (1, 2, L) scores with multiple references, while F1 score is measured for NLU results.

Cho et al. (2014) with two identical fully-connected layers at two ends of the GRU. Thus the model is symmetrical and may have semantic frame representation as initial and final hidden states and sentences as the sequential input.

In all experiments, we use mini-batch Adam

as the optimizer with each batch of 64 examples, 10 training epochs were performed without early stop, the hidden size of network layers is 200, and word embedding is of size 50 and trained in the end-to-end fashion.

The experiment results are shown in Table 1, where each reported number is averaged over the results on the official testing set from three different models. The row (a) is the baseline that trains NLU and NLG separately and independently, and the rows (b)-(d) are the results from the proposed approach with different Lagrange parameters.

The proposed approach incorporates probability duality into the objective as the regularization term. To examine its effectiveness, we control the intensity of regularization by adjusting the Lagrange parameters. The results (rows (b)-(d)) show that the proposed method outperforms the baseline on all automatic evaluation metrics. Furthermore, the performance improves more with stronger regularization (row (b)).

In this paper, we design the methods for estimating marginal distribution for data in NLG and NLU tasks: language modeling is utilized for sequential data (natural language utterances), while the masked autoencoder is conducted for flat representation (semantic frames). The proposed method for estimating the distribution of semantic frames considers complex implicit dependencies between semantics by ensemble of multiple decomposition of joint distribution. In our experiments, the empirical marginal distribution is the average over the results from 10 different masks and orders; in other words, 10 types of dependencies are modeled. The row (e) can be viewed as the ablation test, where the marginal distribution of semantic frames is estimated by considering slot-value pairs independent to others and statistically computed from the training set. The performance is worse than the ones that model the dependencies, demonstrating the importance of considering the nature of input data.

This paper proposes a new training framework for natural language understanding and generation based on dual supervised learning, which exploits the duality between NLU and NLG and introduces it into the learning objective as the regularization term. Moreover, domain knowledge is incorporated to design suitable approaches to estimating data distribution. The proposed methods demonstrate effectiveness by boosting the performance of both tasks simultaneously in the benchmark experiments.